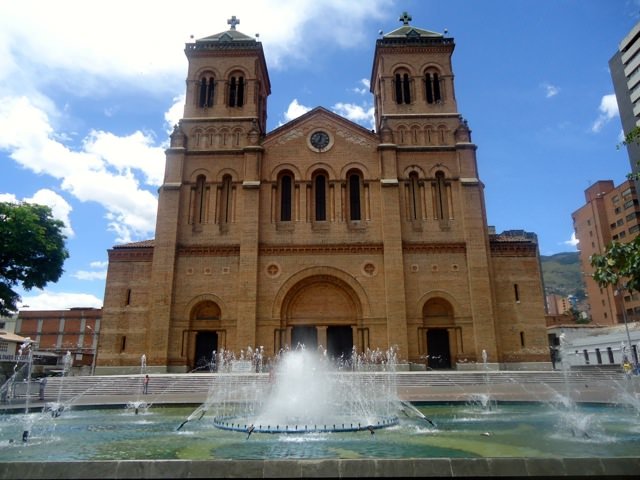 “Listen to my song” he cried. Then he sang, in a voice that was barely audible and one which I could not comprehend. He had his stand, he had his five minutes of fame yet there was no audience to listen, just a tour group of international travellers walking past. And I moved past this man expressing himself in Spanish, I couldn't help but wonder, what was his song?

Bolivar Park is one of the last stops on a Medellin city tour and in my opinion, one of the best. This park is one of the city's oldest and is dominated by the Metropolitan Cathedral and the monument of Simon Bolivar, a liberator who is said to have brought freedom to Colombia.

And freedom is what you find here. The square is a melting pot of people from the city. A blend of the down and outs sniffing glue and smoking crack, retired men hanging out over a game of chess, preachers preaching and kids kicking around a ball amongst the lady boys waiting to pick up business.

This was the real Medellin, the city that I had been living in for the past few months and one which every day surprised me more and more. 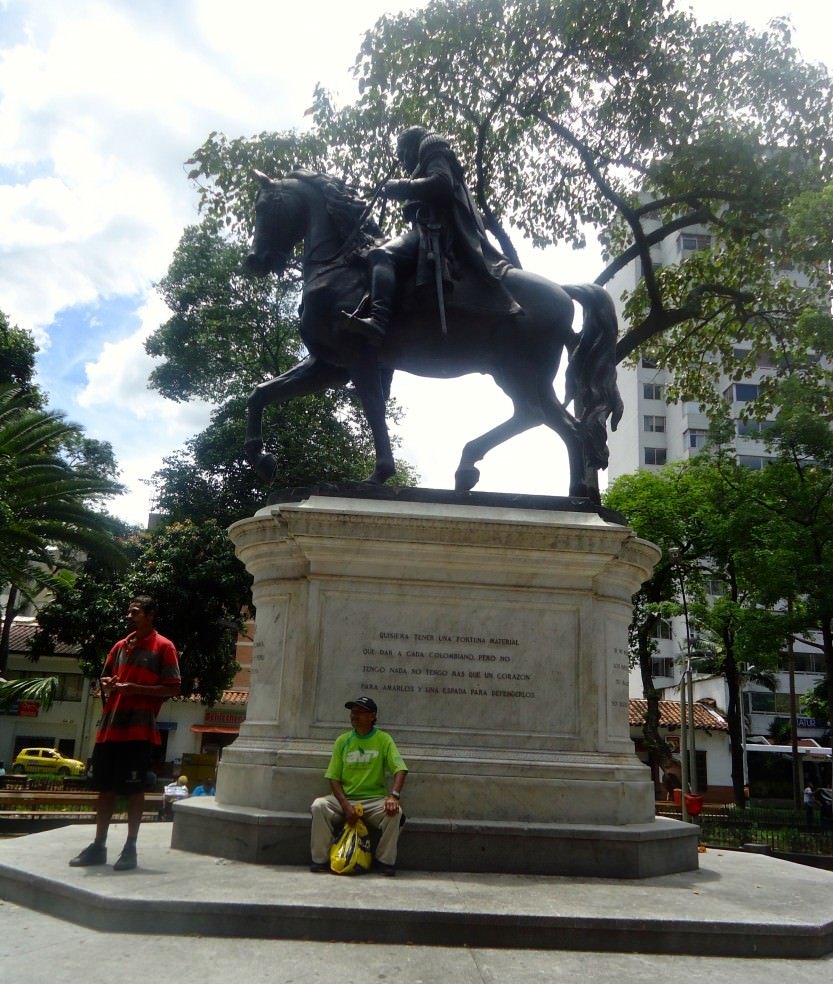 After living here for more than three months, I wanted to know more about the city, about its history, about the areas that were once out of bounds and I wanted an insider’s knowledge about this place I had chosen to call home. The tourist areas no longer interested me and I wanted to see the real city, and this promised to be a city tour with a difference.

Walking tours are a great way to find your way around the city and Real City Tours are no exception. The way they work is by giving you so much information in such an entertaining way that you want to tip heavily at the end. Some even give you a ‘helpful guide’ on how much the tour is actually worth beforehand. And instead of just showing you the touristy sights, many free walking tours take you to areas that you wouldn't stumble across yourself and tell you more than you can find out from history books.

Medellin is one of those cities with a very grisly past and a promising future. Winning Innovative City of the Year Award in 2013, the city has had one of the biggest turnarounds that I have not seen in any other city and I was dying to find out more.

Meeting at the Old railway station, our guide Herman wasted no time in warning us of the dangers of downtown Medellin. “Remember the papaya rule,” he begins.

“Don't have your valuables on display,” he continues. “If you hand it out like a papaya, they will take it.” Basically reinforcing that if you're wave your camera around, then someone's going to steal it. Then he shows us the difference in a 1,000 pesos note versus a 10,000 one, just to make sure that we don't get ripped off as well. I instantly warm to the Colombian man who departed his home town for pastures new and has since returned to educate others about his wonderful city.

“When someone says thank you at the end, and truly means it, that's what makes this so worthwhile,” he tells me as I take him to one side during the tour. As he speaks about why he chose to come back to Medellin, his pride of the city shines through yet I'm about to see a whole lot more than I realise during the next four hours.

Our first stop is the Alpujarra administrative centre and the town hall, home of La Raza Monument. The bronze monument is a work of art created by Rodrigo Arenas Betancur and represents the revolutions through Colombia over the years, culminating with the year that the railroad was built. It stands 124 feet tall and apparently the artist was so proud of it that his ashes are kept in a green box within it. 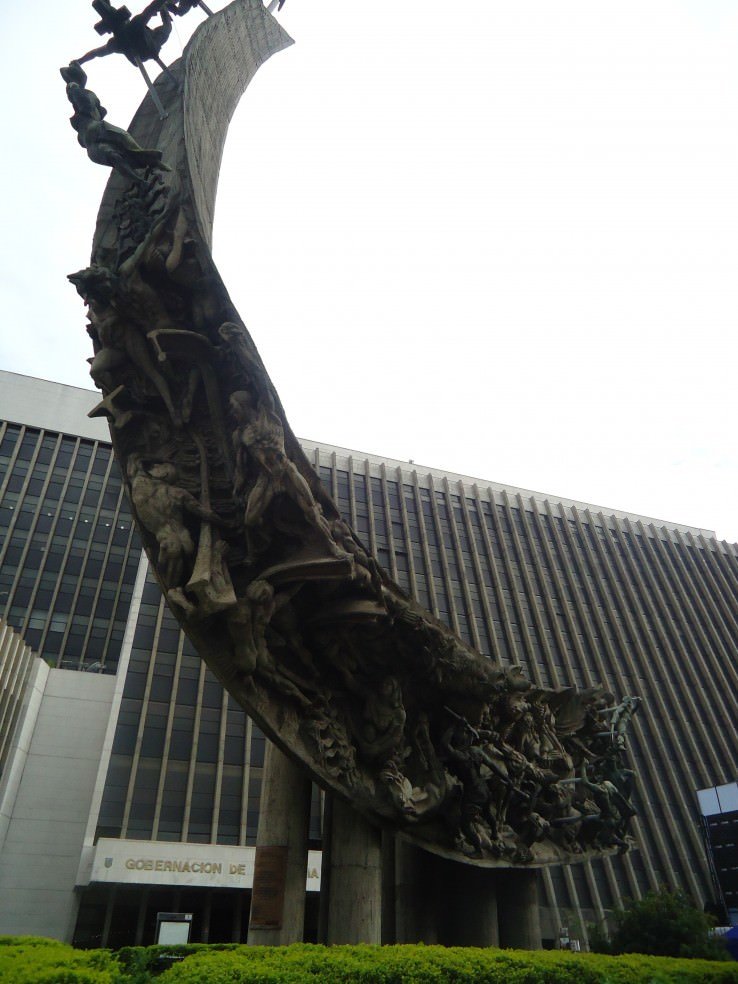 As we wander round, Herman explains more about how it was growing up as a child in the city.

Before 2002 the city was beyond dangerous. Parents used to be so afraid to send their children to school in case they never saw them again and Herman relays passing a building on his school bus which had been bombed the night before. A new president and investment in the city helped change this and within a year, the kidnapping rate dropped by almost 90% and people began to be less frightened of leaving their homes.

Part of the city's success story is the renovation of poor and dangerous areas into safe public areas for people to visit, know as “squares of hope.” One of these areas is Parque de las Luces, known as “Park of the Lights.” An area which visited at night is illuminated by tall white posts. By placing a library here, the message to the youth is to get educated instead of picking up a weapon. And the message seems to be working. 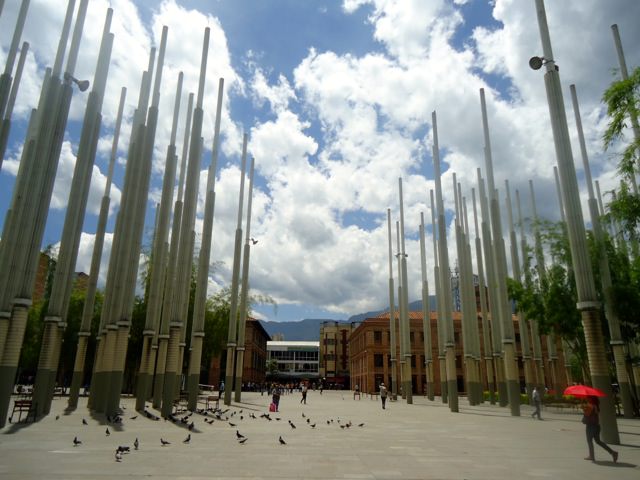 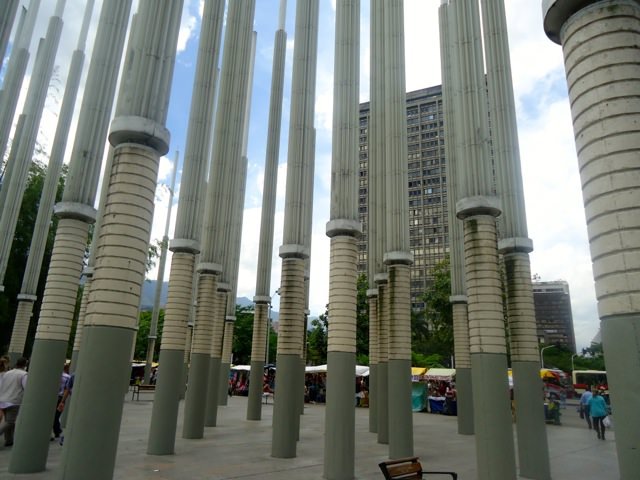 Walking around, I realise that there is a real sense of pride for people living here and it's not just bursting out of Herman either. Locals say hello and the security guards are beyond friendly. Policeman wave as they pass in their trucks and there's hardly any litter to be seen as residents are made to feel part of the city. This even extends as far as the outskirts with renovation projects such as the outdoor escalators and cable car network which acts as public transport to those who live in the poorer pueblos on the mountains.

As the tour continued past the Vasque and Carre buildings, the Palacio Nacional, and the Veracruz Church, we ventured into one of the most famous areas in downtown Medellin: Botero Square. But this isn't the only place that the famous Colombia sculpture and artist has his statues.

Within San Antonio Park sits the well-known bird statue. One which back on 10th June 1995, killed 22 people as a bomb exploded within its bronze casing, an attack on the city and the residents of Medellin. Different groups claimed responsibility but to this date it is still not known who caused the terrorist attack. The bombed statue remains as a reminder of the fear that these people once lived in, and just a few feet away is a new statue, an intact bird, one which symbolises the future and days of hope for the city and its people. 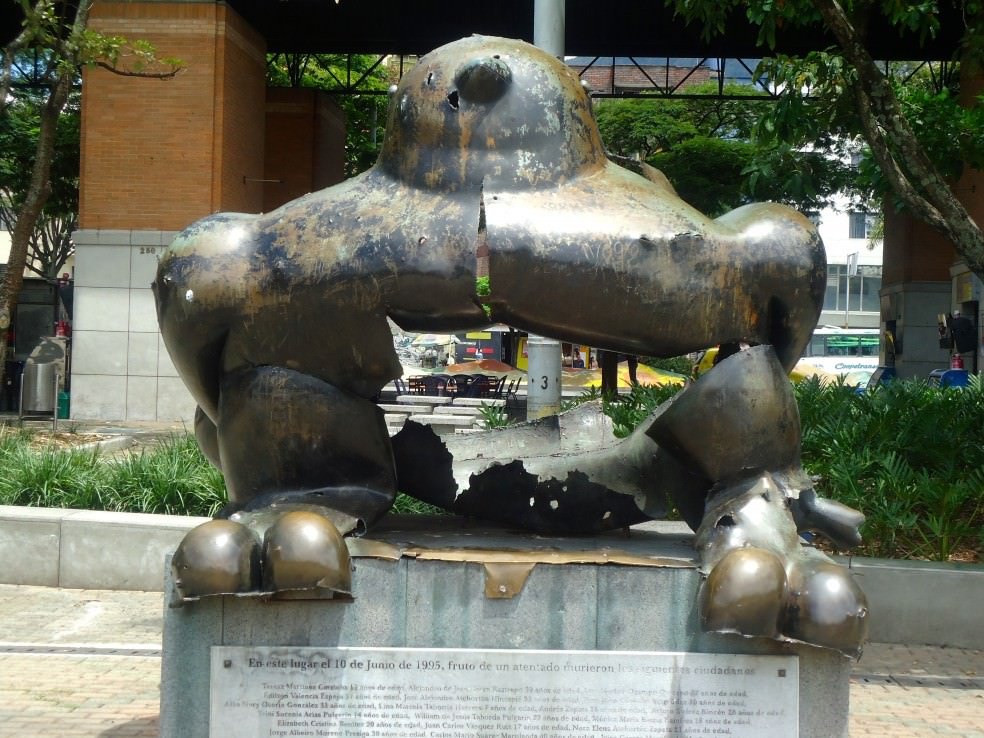 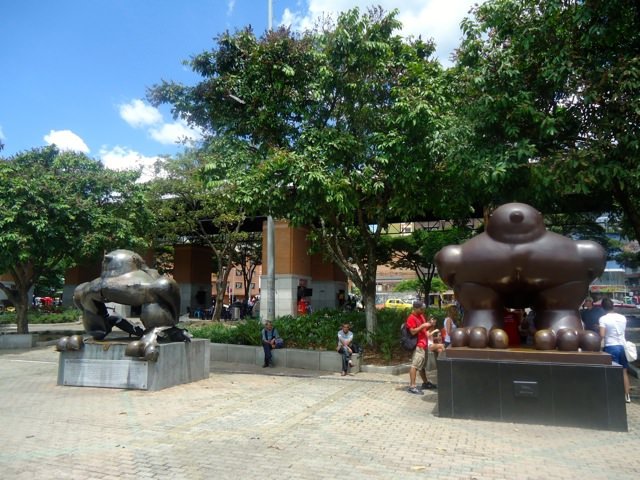 The Botero bird statues symbolising the past and future.

As I jotted down my notes and listened to Herman talk about the transformation and the time that the metro was introduced to the city, I realised there was a moment of quiet where he had stopped talking. I looked up to see a man with tears in his eyes, barely able to speak. As I glanced around the group, I saw the Colombian woman crying, being comforted by her partner. Herman tried to gather his thoughts and continue about how the metro had brought so much freedom to the people, and was finally the reason they had to live life as they wanted and be able to open up their city to people like us.

He explained why they took every moment of joy and make the most of it, choosing to focus on the good and forget about the bad, and how we were all part of the innovative plan and its future. That’s when I realised how special this city really is. Their resilience to forgetting the past and moving on and living in the present is something so remarkable and unique that I felt completely choked up myself.

Medellin has come so far in the last decade and I am so proud to say that I live in this city, a city of people who only look ahead to the future. A model for the rest of the world, in my eyes.

Isn't it time we listened to their song… 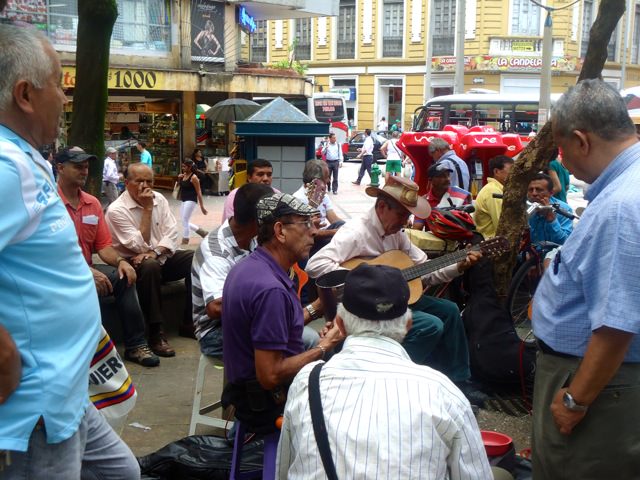 Locals playing music freely in the streets of their city.

Real City Tours runs Monday to Friday twice a day in the morning and afternoons. The tour takes 4 hours with a refreshment stop. You can only pre-book 2 days before so if you're only in the city for a limited time, make sure you book it so you don't miss out. Expected tips are approx 20 – 30,000 pesos (a bargain for 4 hours!)

4 thoughts on “Medellin City Tour – “Listen To My Song””