San Marino is really safe and ideal for solo female travellers. You may not meet many others so you would need to be comfortable with your own company. Solo travel in San Marino is ideal for history and active girl about the globes being the oldest Republic in the world. It’s a stunning place to explore.

But before you leave your solo travel in San Marino, pop into the tourist information office to purchase a San Marino stamp for your passport.

Below is our guide to how to travel solo in San Marino as well as lots of practical information such as how to get to San Marino. All companies included have been recommended by solo female travellers and come with our Solo Female Friendly endorsement. Just choose the relevant section or read the full article. 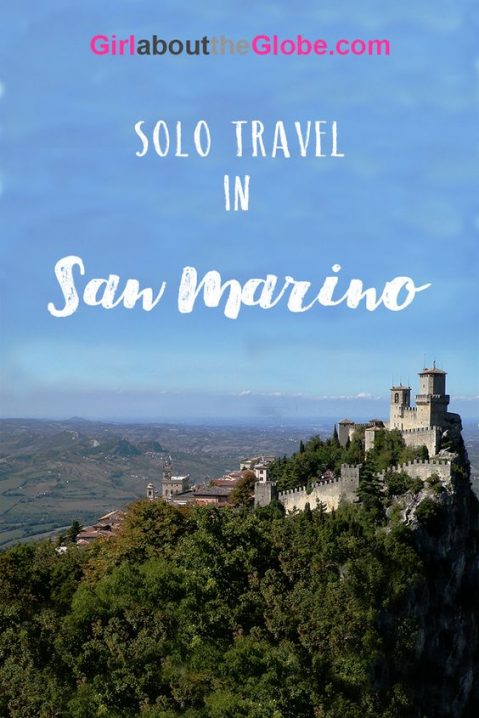 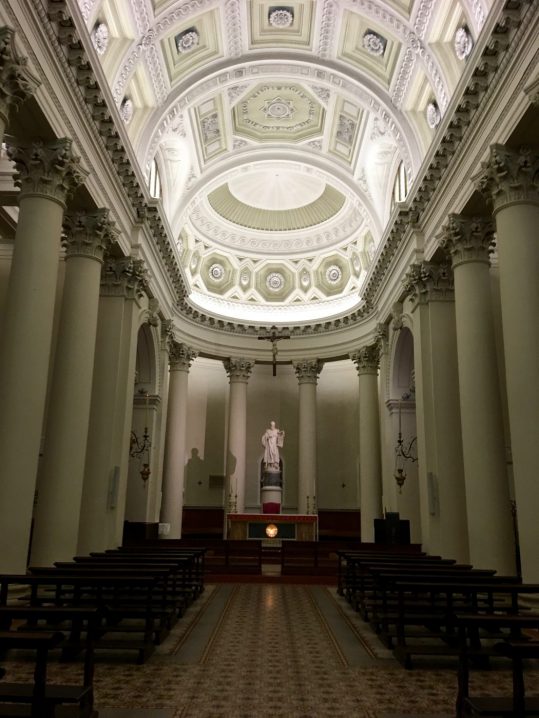 The Basilica of St. Marinus

The Republic of San Marino

In the heart of the Italian peninsula lies the oldest Republic in the world. The Republic of San Marino was founded in 301 AD by a stonemason known as Marinus who was seeking refuge on Mount Titano to escape the Christian persecutions (according to legend).

Its historic centre is a UNESCO World Heritage site with a timeless charm that plunges you into the Middle Ages. As you wonder around this open-air museum you get a sense that much of it has remained unchanged over the years. 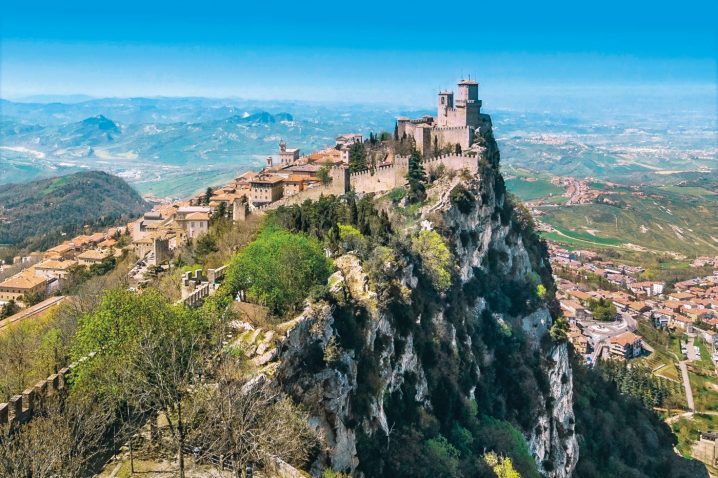 San Marino is surrounded by medieval walls with three striking towers that once served as protection for the narrow medieval streets. All three towers are connected by a mountain path. It was in and around the first tower (or first fortress) that the first inhabitants of San Marino once lived.

Up until the 1960's this fortress was also used as a prison. Inside there is a small church dedicated to Saint Barbara, and cannons which were donated by Italian kings. The second tower is home to the Museum of Ancient Weapons dating back as far as the 8th century.

San Marinos' history is reflected in its old institutions which date back to the 13th century. Its borders have been the same since 1463 and although it is situated in central Italy it is a separate country with its own institutions, traditions and cuisine.

Take a tour of the Public Palace which was rebuilt in a Gothic style in the 20th century using the local limestone. This is the home of the Great and General Council and where the official ceremonies take place.

Inside you can visit the room where decisions affecting the oldest Republic in the world are made and watch a video about its independence and democracy. The stunning artwork inside the palace displays its fight for its values and freedom. Outside in the Piazza della Libertà is the Republics' own Statue of Liberty, a symbol of their freedom. 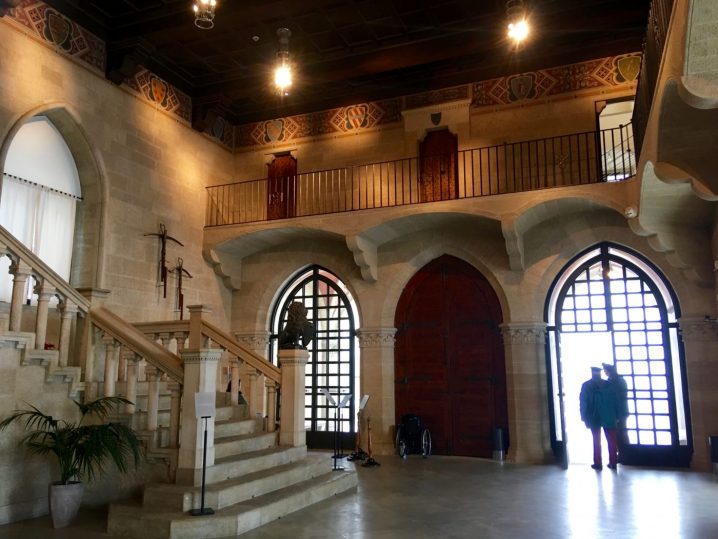 Inside the Public Palace

A short walk from the Palace is one of the most beautiful sights in San Marino. Named after Saint Marinus, the Basilica of Saint Marinus dates back to the year 1825. It is in a Neoclassical style with the seven altars decorated with statues representing the twelve apostles. It looks similar to a greek temple with a stunning white flower design adorning the ceiling.

A statue of Saint Marinus sits inside its stunning white columns behind the altar, as well as a small urn containing his bones. A wooden throne with the message ‘be humble’ makes this a peaceful place to sit and reflect. In the same part of town is the Saint Francis Church, a 14th century church with an art gallery.

For history Girl about the Globes, the State Museum is the perfect place to discover the history of San Marino with nearly five thousands pieces under its roof. The museum is over several floors and houses archaeological artefacts from the Neolithic to the Middle Ages.

Don't miss the ancient coin collection and old medals. You could easily spend a couple of hours here. 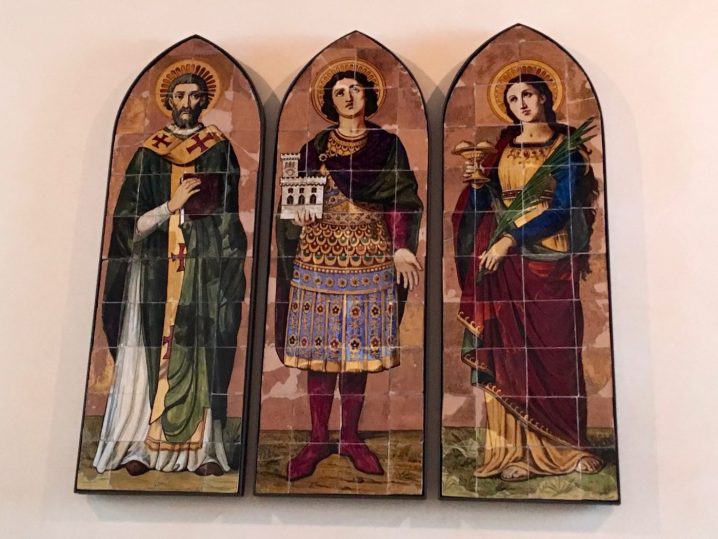 If you are fascinated by vampires, visit the Vampire Museum or even the Torture Museum which needs no explanation. There’s also a Waxworks museum with historical reconstructions with period costumes from a bygone era.

If you’ve wondered what a medieval pageant would have been like, visit during the month of September during the Feast Day of San Marino and of the Foundation of the Republic. If you can’t make it for this there are plenty more cultural traditions such as the changing of the guard which takes place in Piazza della Liberta, the home of the Public Palace. The ceremony is held every hour on the half hour during the summer months. 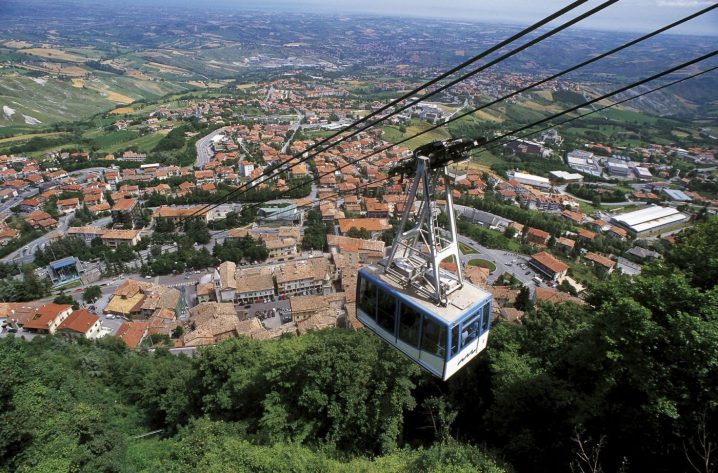 But there is more to San Marino than history and beautiful buildings – even the mountain has been listed as a UNESCO World Heritage Site making this a perfect destination for nature Girl about the Globes.

The summit of Monte Titano is the highest point, at 750 metres above sea level. From here there are fantastic views of Montefeltro, the Upper Marecchia Valley. If it's a clear day you can see as far as the coastline of Croatia.

On Mount Titano you can hike, mountain bike and even free climb on the stonewalls (if you are feeling adventurous). There's a really nice walk along the mountain ridge which offers a view of the Romagna coastline. From the first tower head towards the second tower to follow the Witches' Path.

If adventure sounds too much, you can enjoy their rich food and wine tradition instead. There are dozens of shops and restaurants to buy and try local produce such as olive oil, honey, and cheese.

Try the traditional cake called Tre Monti cake and wash it down with a glass of their finest wine. For such a small Republic they produce many products and you’ll also find traditional pottery, artist craftwork and rare stamps and coins amongst its creations.

Whether you choose to meander around the streets getting lost in its medieval cobbles, climb the ancient towers or admire delicate artwork, exploring the oldest Republic in the world is definitely a wonderful education. 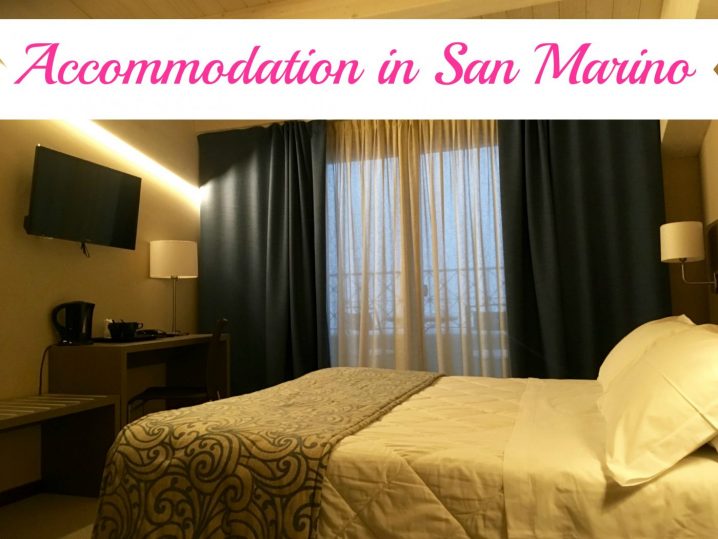 If you would like more of a local experience, there are rooms on Airbnb where you can stay with locals. You can save $20 off your first stay with this Airbnb link.

The accommodation below has been recommended by solo female travellers from our Girls about the Globe community and comes with a Solo Female Friendly endorsement. 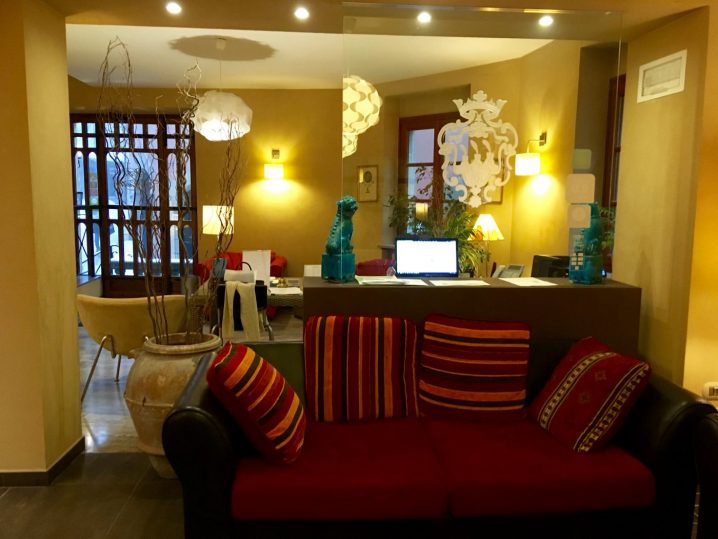 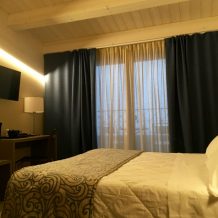 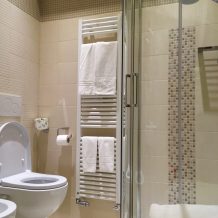 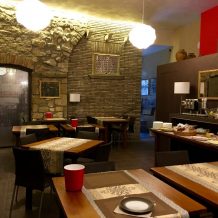 I definitely recommend staying within the old town and Hotel La Grotta is perfectly situated to wander through the Medieval streets. This warm, cosy hotel is just gorgeous. Decorated in a modern contemporary style, the rooms come with heating and a balcony with views of San Marino below.

The beds are super comfortable and there is also a flat-screen TV and a mini-bar. There is no problem being here solo either as the owner makes sure that you are really looked after.

They offer a lovely breakfast buffet within the hotel’s cave walls, and have a coffee machine within the lobby to help yourself to. For lunch and dinner the restaurant next door serves great food as well as amazing ginseng coffee. Choose from a classic room or a superior room with a terrace and views over the historic centre. 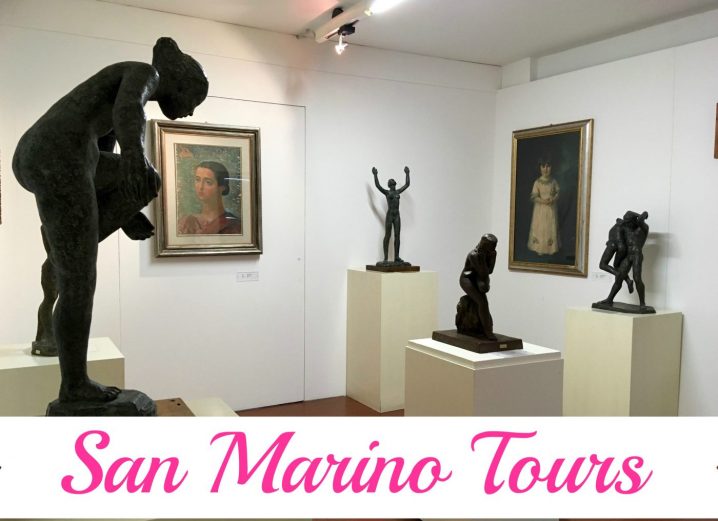 You won’t find San Marino included on overland tours with G Adventures or Intrepid but there are guided tours you can do to learn more about the world’s oldest Republic. Choose from a private walking tour, a local cooking class, or a trek along Monte Titano.

* Discover all tours, prices and availability for San Marino tours

If you are an active GatG and a keen cyclist San Marino Cycling Experience offers cycling tours from 27km up to over 100 kms. 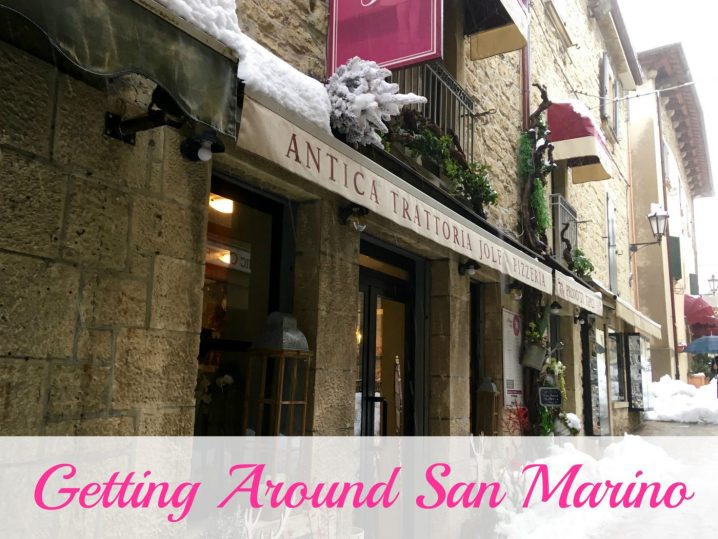 Getting Around San Marino

The old town of San Marino is walkable. It can be steep in places so make sure that you have walking shoes. Hiring a car isn’t really necessary here.

San Marino has its own panoramic cable car that connects Borgo Maggiore with the old town. It only takes a few minutes and offers breathtaking views of the Adriatic coast, reaching a height of approximately 200 metres.

How long in San Marino

Because of its size, it’s easy to see the highlights of San Marino within a long weekend so three nights here is perfect. With its location being so close to Italy, you could also combine your San Marino trip with the nearby beach destination of Rimini (only one hour away by bus). 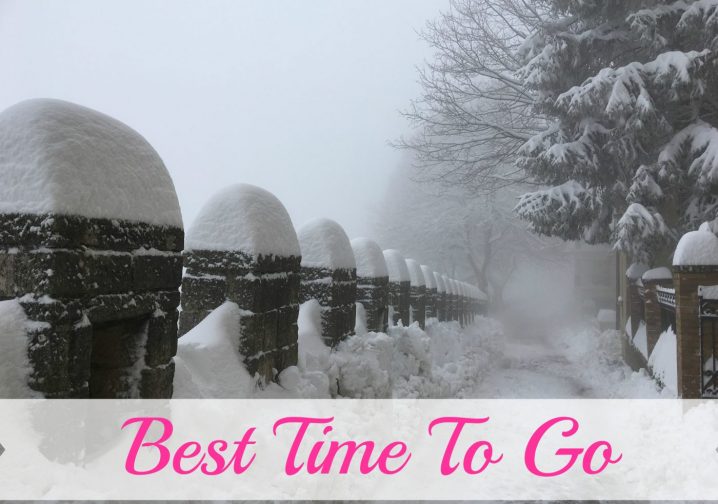 San Marino is a year-round destination. Visit in the winter months to see this gorgeous Republic as a Medieval winter wonderland or during the spring, summer or autumn months to take advantage of the biking and hiking trails. It can snow during December and January so take some warm boots and a hat just in case.

You could also combine your trip with one of their festivals. Visit on 7th July to celebrate the Anniversary of the inscription on the UNESCO World Heritage List. Or 3rd September for the Feast Day. If you like cars you be there for the Moto GP World Championship, Rallylegend, or classic cars event. Find the festivals here.

The chart below is the annual weather in San Marino from January to December. 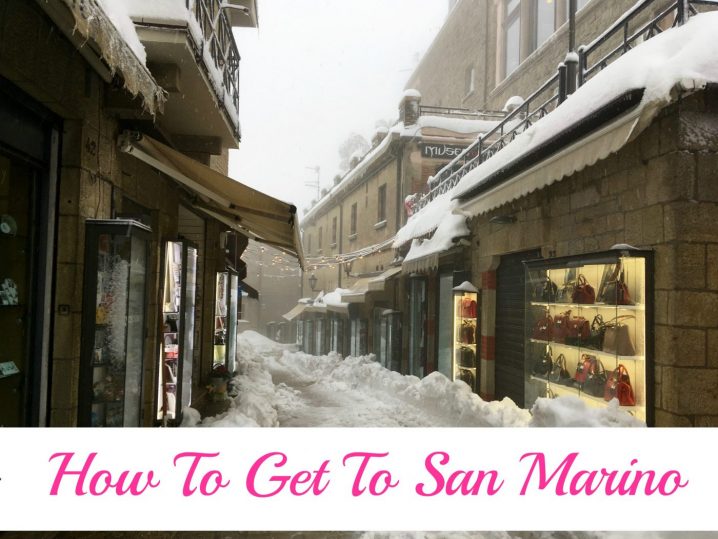 How To Get to San Marino

San Marino is located in Central Italy just 10km away from the Adriatic Sea making it easy to reach Italy. If you are travelling from Italy by car, take the A4 Bologna to reach San Marino.

It doesn’t have its own airport so Rimini is the closest airport. You can also fly into Bologna. I flew into Milan and took the train from Milan to Rimini before taking the bus which took one hour.

You can book train tickets with the Train Line and buy bus tickets from Rimini to San Marino at the Tourist Information Centre outside of Rimini Train Station. A single bus journey to San Marino costs €5.00.

Plan a Trip to San Marino

If you are ready to plan a trip to San Marino here are some useful links to help you plan your trip including vaccinations and useful lingo.

Do I need a visa? Not on a British passport

Did you know? That San Marino is the oldest Republic in the world

Airlines to Italy (no airport in San Marino)

The Best Time to Go – July

Events and Festivals in San Marino

There aren’t any volunteering opportunities in San Marino.

Stay with a local on a homestay for a cultural experience. Visit the museums or take part in one of San Marino’s festivals. Find out more.

Treat yourself to a spa at Grand Hotel Primavera where you can enjoy all the spa facilities such as a sauna, Turkish bath and jacuzzi and include a 30 minute massage from €45.

Issues in the Country

San Marino doesn’t seem to have any issues within the country.