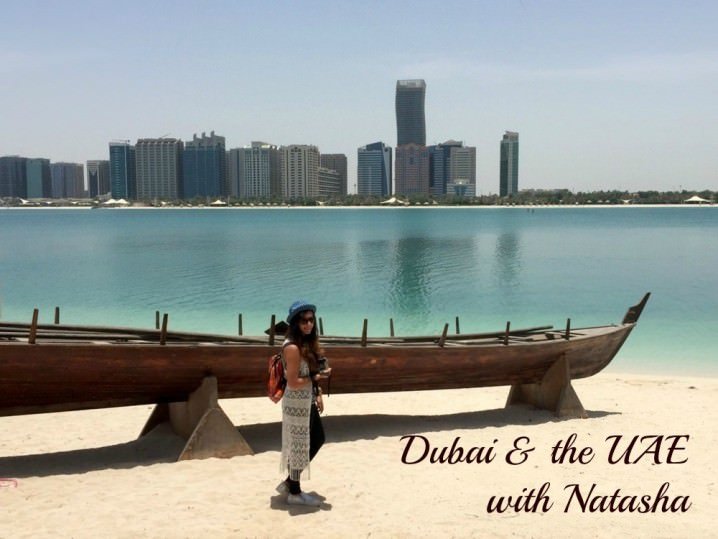 Natasha Amar is originally from India and lives in Dubai which she calls home. Natasha gives us an insight into solo travel in the United Arab Emirates and visiting Dubai as a solo traveller.

I’m a full-time travel blogger and freelance writer who used to work in Finance. I always had the nagging voice in my head telling me that I should be in a creative field that combines my love of travel and writing but I took a long time (over four years) to pay heed to it. Now, I can’t imagine doing anything else.

You say that “for a long time, I’d been chasing dreams that weren’t really mine.” Can you explain a bit more?

It’s the usual patterns that we fall into as young people making career and life choices- we focus on the end-results of our work like, “I’ll work at this so I can earn an X amount of money and buy a car, house etc,” but we don’t look at the work itself as an objective. I should have asked myself what it was that I really wanted to do, even if it meant that most of the satisfaction came from the work itself and the monetary compensation was a nice bonus.

I took a long time to understand that just because you’re good at something and it pays well, that isn’t necessarily what you should do. At my old job (that paid very well), I asked myself each day what the point of it all was for me except that I’d get a nice paycheck at the end of the month. Soon enough, even that stopped motivating me and I decided I’d rather travel and write stories even if it meant I was going to be more broke than ever. 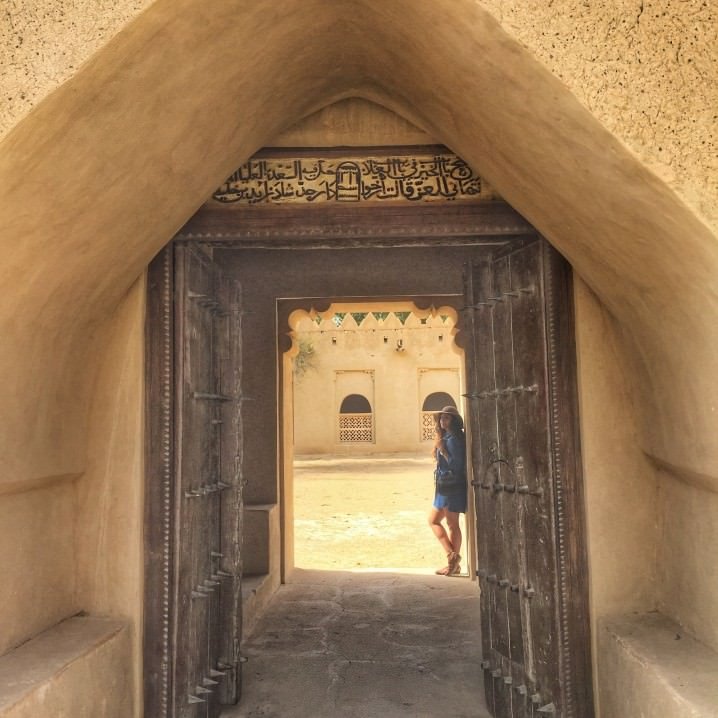 Dubai is just one of the States in the UAE. Can you tell us about the other lesser-known ones?

The UAE is made of seven emirates, of which the most developed and well known are Dubai and Abu Dhabi. Abu Dhabi has a lot of interesting things to do, provided you visit in the right weather such as kayaking in the Eastern Mangroves, visiting the Sheikh Zayed Grand Mosque, Falcon Museum, and a number of forts and palaces in its second city of Al Ain. In Al Ain, there’s also a Camel Souq and the Jebel Hafeet mountains are a short drive away.

Ras Al Khaimah is a great place to visit for those who like nature, mountains, hot springs and trekking, especially in the cooler months. Even in Fujairah, the landscape is rugged with the bordering Hajjar mountains and many wadis to explore.

Fujairah is also home to beaches where you can go snorkeling and diving and see the marine life in the UAE. Both emirates are also interesting from a historical point of view because there are old forts, mosques and museums. Umm Al Quwain is home to many beach resorts with plenty of water sports and activities like parachuting.

Some women may be apprehensive about the UAE, what is your experience as a woman there?

I was born and raised in Dubai and obviously have a comfortable sense of familiarity with the local culture. As a woman, I’ve never felt unsafe in the city- in fact, women (and also local women) in Dubai are very independent and the general attitude towards women is respectful. It’s safe to take a taxi by yourself as a woman even at 3.00am because the laws are taken very seriously in Dubai and crimes in general are not common. As long as you show respect for local culture and are respectful of local laws, whether as a man or woman, there’s nothing to worry about. 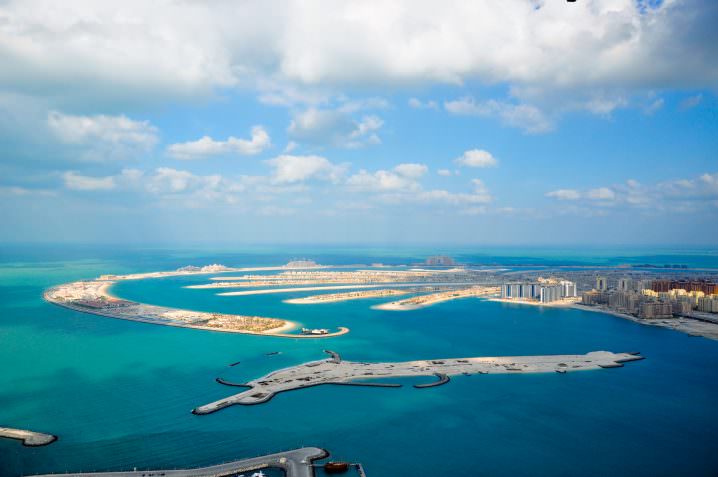 What do you think is Dubai’s attraction to women travelling alone?

Dubai truly does have something for everyone, whether you’re the kind who enjoys trying out adventure activities, are interested in learning about the culture, like to shop, or simply enjoy a beach holiday, so it’s hard for me to pick one activity specifically for solo women because there’s really nothing a solo woman can’t do.

I think more and more women are opening up to Dubai as a destination on their solo travels, even as a short trip, so yes.

I think a lot of the interesting places outside Dubai are hidden gems because most tourists skip them altogether. The city of Al Ain, Jabel Hafeet mountains, Eastern Mangroves, Jebel Dhanna and Sir Bani Yas Island are just some of the places you wouldn’t expect to see in the country.

If I had to choose my favourite things to do in Dubai, I’d spend four days in Dubai seeing the major attractions in Dubai such as the Burj Khalifa, Dubai Mall, Bastakiya Quarter, Dubai Museum, Heritage Village, Spice and Gold Souks, go bar hopping in Madinat Jumeirah, dine alfresco at Dubai Marina, and spend an afternoon at Jumeirah Beach.

For the next three days I’d head to Abu Dhabi to take a guided tour of the Grand Mosque, visit the Falcon Hospital, lunch at Emirates Palace, Eastern Mangroves, forts, museums and oases in Al Ain, and the mountains of Jabel Hafeet. 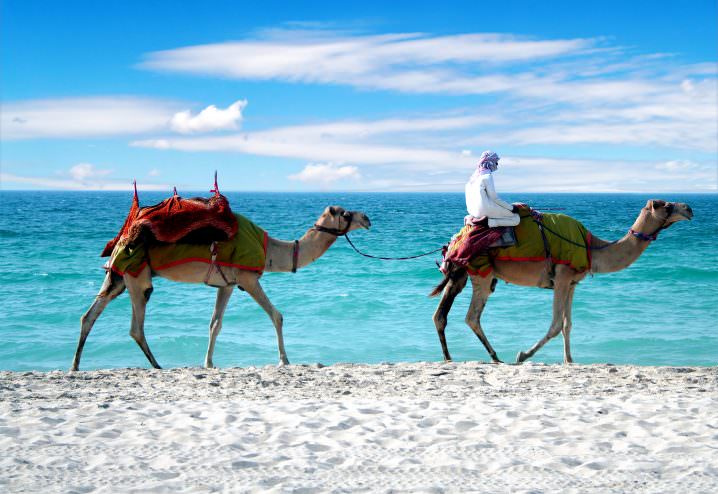 This really depends on the emirates you plan to visit. If you’re in Dubai City, the Dubai metro makes public transportation a breeze, plus you also have buses and taxis like the other emirates. If you want more flexibility and plan on venturing out of Dubai, then you’re better off renting a car.

In Dubai, there’s plenty to do in the evenings as a solo traveler. If you’re the outgoing type, there are a number of clubs, pubs and bars, and many salsa nights through the week. During art season, there are many events hosted by art galleries and studios. You can also go watch stand-up comedy shows, many of which are hosted free of charge (or at a minimal charge) by the Dubai-based Dubomedy School. Other than this, there are a number of shows you can watch- from traditional Afro-Cuban shows to ballet. We also have a few community and arts based festivals, street festivals and indie movie and documentary screenings held at various venues around the city.

There aren’t any (mention-worthy) hostels in Dubai but it’s possible to meet people at one of the many events or meetups around the city.

The water fountains at Dubai Mall

Unless you’re on a shopping trip, I’d avoid visiting all the malls in Dubai. If you’ve seen the Dubai Mall, which is the biggest of them all, you’re good. I’d also avoid visiting at the peak of summer because it really is the worst time to be in the country. It’s best to visit from mid-October to March.

What would you say to someone who is looking to go to UAE alone for the first time and is unsure about it?

Come with an open mind, take your time to see the country and respect the culture, and you’ll love it.

To keep traveling and telling stories about the people, places and things that make an impression on me. In terms of work, I’m hoping to grow my portfolio of print magazines.

Are you planning a trip to Dubai? To find out how to travel solo in Dubai visit the Dubai Solo Destination Guide.