Aruba is one of the safest Caribbean islands and travelling solo in Aruba is so easy for women. That's why we've given it 5 out of 5 stars. Not only is the country open minded and extremely tolerant but they are also very supportive of women. They have dedicated events for ladies including golf lessons and wine seminars and even going out alone at night is perfectly safe here with dinner shows, bars, live music, party cruises and party buses. You will never be alone here, unless you really want to be of course.

Below is our guide to how to travel solo in Aruba as well as lots of practical information such as where to stay, which tour company to use and how to get around. Find out how to get from the airports and what to do in each place. All companies included have been recommended by solo female travellers and come with our Solo Female Friendly endorsement. Just choose the relevant section or read the full article. 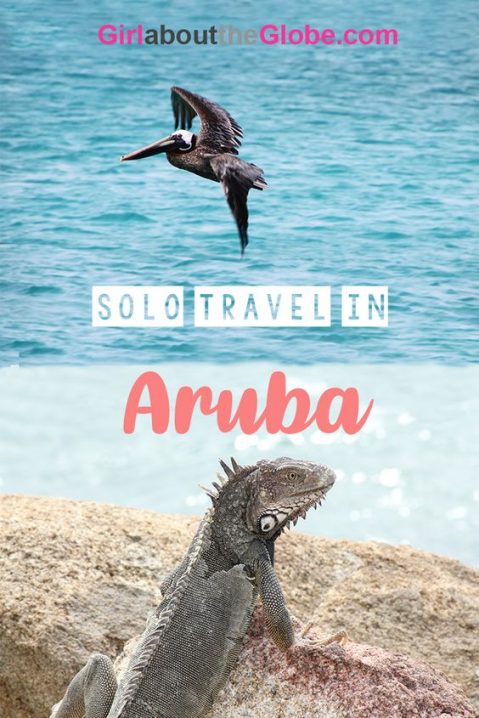 Aruba is by far one of our favourite Caribbean islands because it truly has everything that you need. There are so many reasons that it’s one of the most popular countries and attracts many visitors from Europe and the U.S. Although Aruba still has ties with the Netherlands, it remains its own country and is culturally diverse with 96 different nationalities.

Its vegetation isn’t what you would expect from the Caribbean although it still has miles of pristine white sand, it also has rolling landscapes and a rugged coastline. Being so close to the Equator means that Aruba is always hot with constant trade winds which create a year-round breeze. Most people here are multilingual and you’ll find a Latin American flair and warm hospitality. 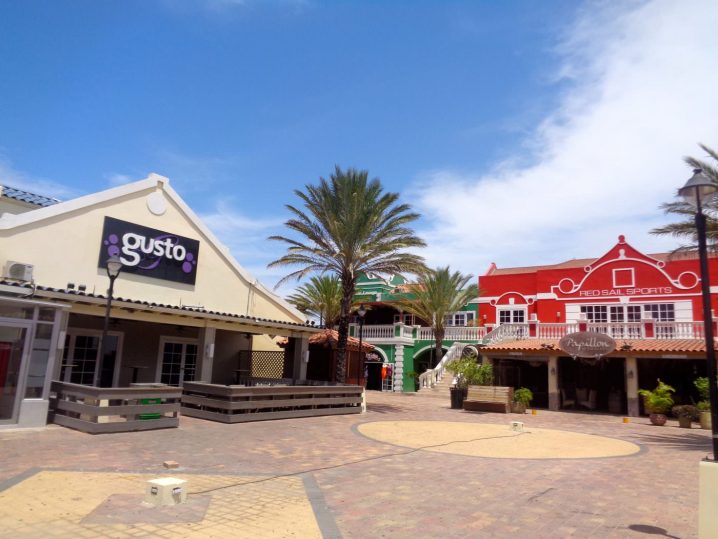 Oranjestad is the capital and you’ll find shopping, restaurants, casinos, trendy clubs, and glittering shows. The downtown is cute with colourful buildings and a free tram that takes you around. Here you’ll find art galleries with Aruban crafts and local musicians playing at night. It’s a sociable area to meet others with evening entertainment which draws crowds to the area at night.

Take a tour of the Balashi Brewery – Aruba’s national beer or the Aruba Aloe Factory and Museum. For museum buffs visit the Historical Museum or the Archaeological Museum showing the cultural and religious practices of the Amerindians.

Aruba has some of the best shopping in the Caribbean with high-end international labels and local handcrafted gifts. Most of the malls have restaurants and bars too so you can spend hours in one. But shops aren’t open past 6pm here so keep your splurging to the daylight hours. 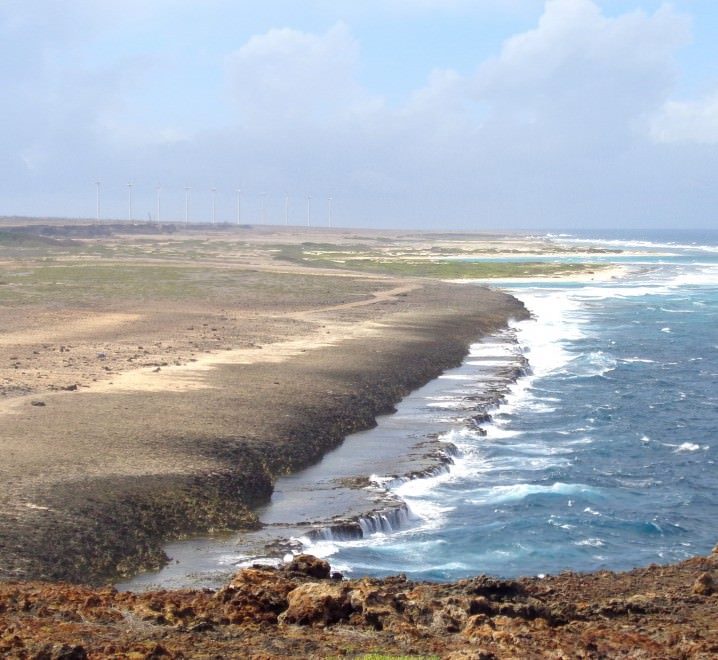 If you’re an adventurous solo, Aruba will keep you busy, whether you want to jump behind the wheel of an ATV and drive along the rugged coastline or get flung around in a giant yellow jeep (definitely recommended). Aruba is the perfect Caribbean island to keep your inner child entertained, and any activity you can think of here you can do. From horse riding to just watching a sunset on top of a hill, Aruba has many rugged trails to hike. Hooiberg is one of Aruba’s highest peaks with 500 steps to climb.

Arikok National Park covers nearly one-fifth of the island. The area is just so spectacular with different landscapes such as limestone cliffs and sand dunes. This is where you’ll find donkeys, goats, lizards and the local rattlesnakes amongst the many cactus plants. Explore the cave systems to see the protected bats as well as drawings by the Amerindians thought to be more than 1000 years old. 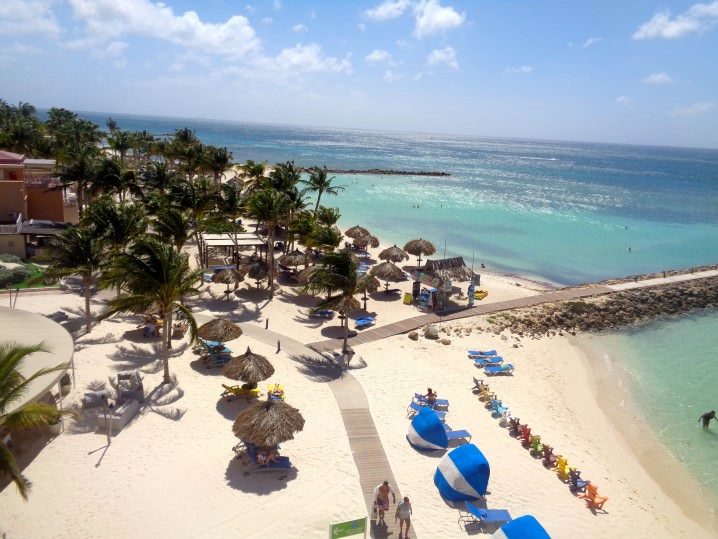 For animal lovers, head to the Donkey Sanctuary which has more than 138 endangered donkeys. You can feed them and even adopt one! Then cruise onto the Ostrich Farm to feed one of these huge birds. If you prefer to see birds in the wild, Bubali Bird Sanctuary is a freshwater lagoon and nesting site or visit the Butterfly Farm instead.

Aruba has a lot of history such as the Bushiribana Gold Mill Ruins, an abandoned gold mill from the 19th century gold rush. Then there’s Frenchman’s Pass with the legend of a ghostly Indian tribe, from the invasion by French pirates in the seventeenth-century. Alto Vista Chapel, is a bright yellow chapel built in 1750 and the island’s first Roman Catholic Church or visit Santa Ana Church constructed in 1776 with a Neo-Gothic altar. 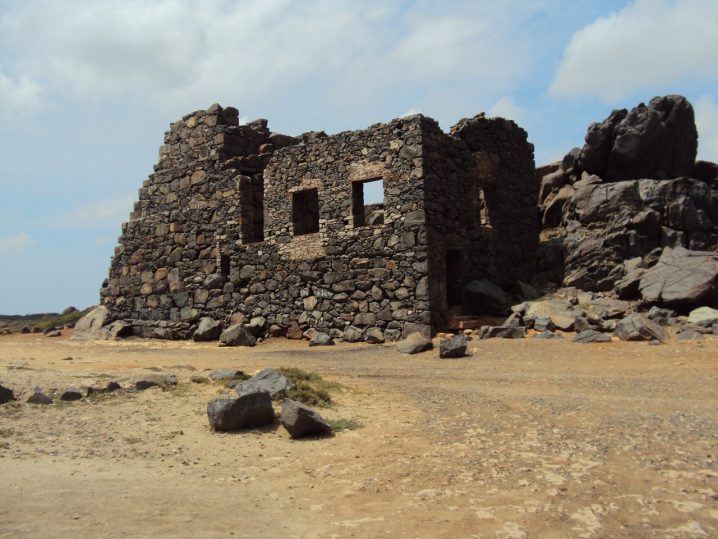 There is so much nature here too. One of Aruba’s biggest highlights is the Baby Natural Bridge, or explore the Triplet Natural Bridge as you drive past the biggest rock formations on the island. Watch the sunrise on the north of island sits the California Lighthouse named after a an American steamship which was shipwrecked off the shore in the 1800s.

You simply can’t come to Aruba and not experience the beach. The beaches here are free and Seven-mile strip along the west coast is busy with resorts and more activities than you’ll have time to do. For more secluded beaches head to the Windward Coast to see the limestone coves and craggy terrain, but with strong undercurrents it’s not advised to swim here. Sunbathe at Manchebo Beach – a private beach or windsurf and kitesurf on Hadicurari Beach. 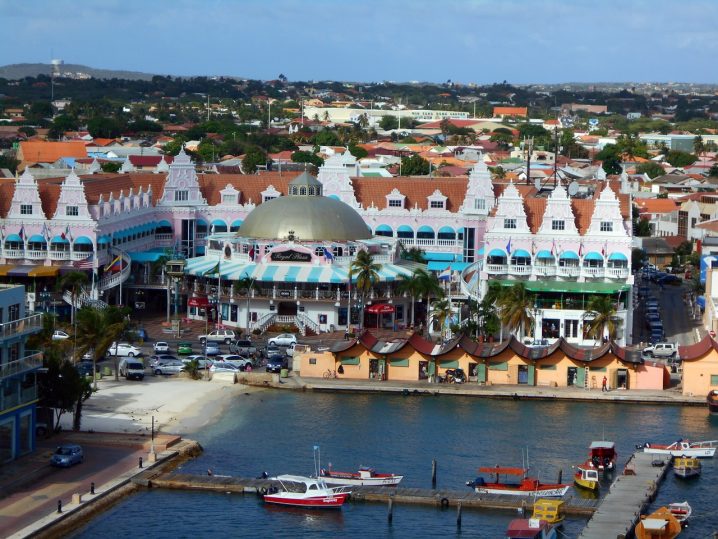 Some of them are only accessible on a 4×4 such as Andy Curry Beach (yes it really is called that) so you’ll have to take a tour to reach them. Baby Beach is one of the snorkel spots and is a shallow cove protected by a natural barrier. Or just watch local fishermen anchor their colourful boats at Rodgers Beach.

The visibility in the sea here is so clear that you don’t even need to snorkel but if you do you could power snorkel or try Snuba – a cross between diving and snorkeling or even Sea Trek in a diving helmet on a 375-foot walkway. In fact, there are so many ways to explore the sea here that you won’t know which one to pick.

Then there’s the decision between the activities above the water too: sailing, JetLev, parasailing, windsurfing and kitesurfing, wakeboarding, kayaking, paddle boarding, birding, skydiving and SUP yoga on a stand up paddle board. 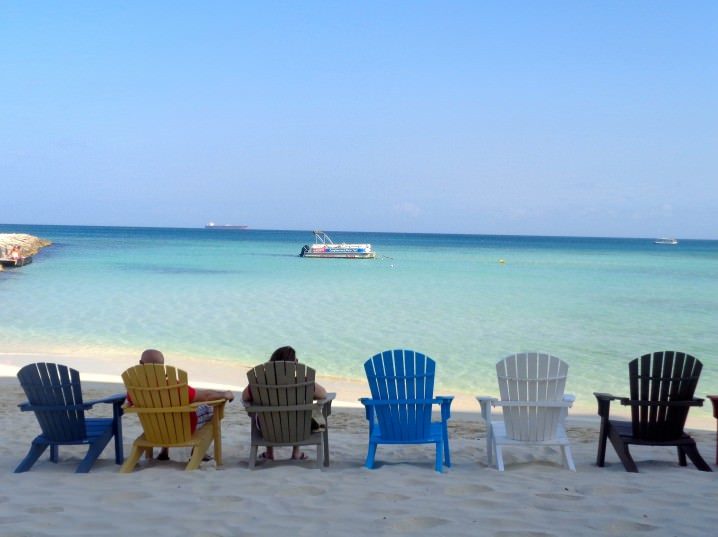 Or if getting wet isn’t really your style, how about getting an underwater view in a semi-submarine instead. At night a sunset sail on a catamaran with an open bar is a great way to see the coastline and meet others. For the big kids in us, catch the bus to De Palm Island – Aruba’s all-inclusive attraction but be prepared to be sharing the island with families.

Being solo in Aruba in the evenings is no problem either. With the island being so safe, there’s no need to worry about going out alone and the nightlife is geared up for solos. Choose to mingle with the other tourists in bars such as Senor Frogs or Gusto or just wander along the casual beach bars at Oranjestad. You’ll soon get to know the people and bartenders. You’re guaranteed to find a happy hour somewhere, a cocktail party or a sunset cruise. There are plenty of casinos if you fancy a flutter and at Alhambra Casino they even teach you how to play.

Or just choose to watch the colourful fountain lights at Paseo Herencia or one of the themed performances held at the amphitheatre. On a Thursday, head to the Carubians Festivals for a steel band performance.

Aruba has great service, outstanding cuisine and the some of the happiest people in the Caribbean. Plus you may pick up a few phrases of Papiamento whilst you’re here. It’s not called One Happy Island for nothing. Bom bini to Aruba…

Aruba is on the itinerary of most cruise lines in the Caribbean so expect more tourists if you visit between October to April.

Be careful of crashing waves on the Windward Side of the island. 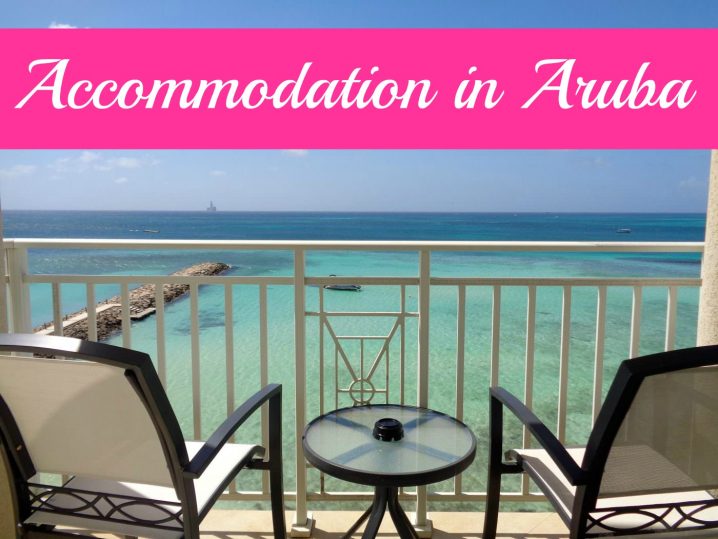 There are plenty of places to stay in Aruba. If you’re travelling on a budget choose a self-catering apartment where you can cook your own meals or stay in Monserat, a more local area which won’t cost you as much as the beach hotels.

Palm Beach is one of the best places to stay if you do want to be near the ocean. The beachfront is lined with luxury and all inclusive hotels. I stayed at the Divi Phoenix Beach Resort which was amazing. Read my review here. Check all properties in Aruba on the link below.

* To book, check prices or availability for all accommodation in Aruba 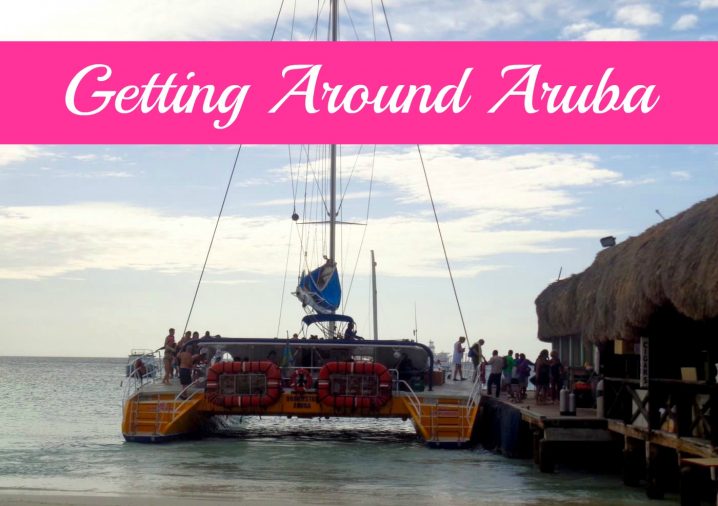 For cabs, call ahead instead of trying one flag down on the road. Taxis here don’t have metres and you pay a fixed rate based on distance. On Sundays, holidays and also between 23:00 and 7:00am each day there is a U.S. $3 surcharge.

Buses run daily between some of the hotel areas and larger districts. You’ll find the main bus station in downtown Oranjestad. You can also buy day passes: for U.S. $10 for unlimited transportation on the Arubus routes across the island. De Palm Tours can also arrange chartered transport for you.

It’s so easy to hire a car here and you don’t even have to fill up the tank. Just pull into a petrol station and an attendant will fill it up for you.

There is a bus which calls at the airport (except on Sundays) and costs $3 for the 15 minute ride to Oranjestad but a taxi is a much easier way to get from the airport. A taxi will cost approx US $30 to the Eagle Area hotels which is a 15 minute drive and less if you are staying in the Oranjestad area ($20).

If you pay for a taxi you are only allowed one piece of luggage and will be charged U.S. $2 for any additional luggage. Hoppa operates a cheap airport shuttle that will take you to the city centre or your hotel.

How Long Do You Need?

A week whether you want to just lounge around and de-stress or experience all the activities that the country has to offer.

Plan a Trip To Aruba

Local Currency – The Florin but the US dollar is widely used.

Do I need a visa?

The Best Time to Go – Year Round

Events and Festivals in Aruba

Did you know? Nearly everyone here speaks Papiamento, Dutch, Spanish and English.

Help out at the Aruba Reef Care Project

Issues in the Country

Boa constrictors are everywhere in Arikok National Park and are breeding so fast that park rangers have to hold National Snake Hunt days. Plus they can hitchhike in your car engine.

The hitchhiking snakes of the Caribbean

Weather in Aruba – Below is an annual weather chart for Aruba

Disclosure: Girl about the Globe is a participant in the Amazon Services LLC Associates Program as well as other affiliate programs, designed to provide a means for us to earn fees by linking to Amazon and affiliated sites at no extra cost to you.

2 thoughts on “Solo Travel in Aruba”