Solo Travel in Trinidad and Tobago 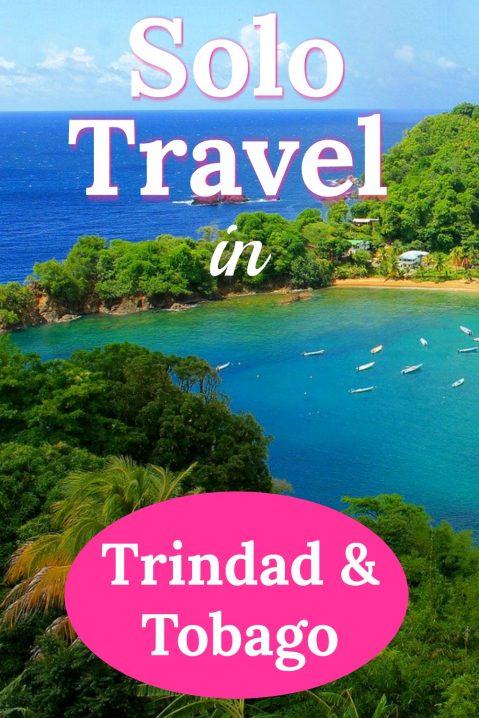 If you read the FCO advice for Trinidad, it would probably deter from you visiting this island. Although there is crime here and there are areas that you should avoid which are advised on their website, if you pre-order a taxi to collect you from the airport, stay in reputable accommodation and use a tour guide instead of going out alone, then you can still enjoy this cosmopolitan island which has a very diverse nation.

You may feel more comfortable travelling solo in Tobago which has a safer feel and is usually the more popular choice with travellers. Prepare to get some attention from Caribbean men here but if you say that you’re not interested, they will leave you alone.

Castara is the nicest place here for solo females and if you’re friendly to the locals, they will be too. Just say good morning or good evening and people smile back at you. 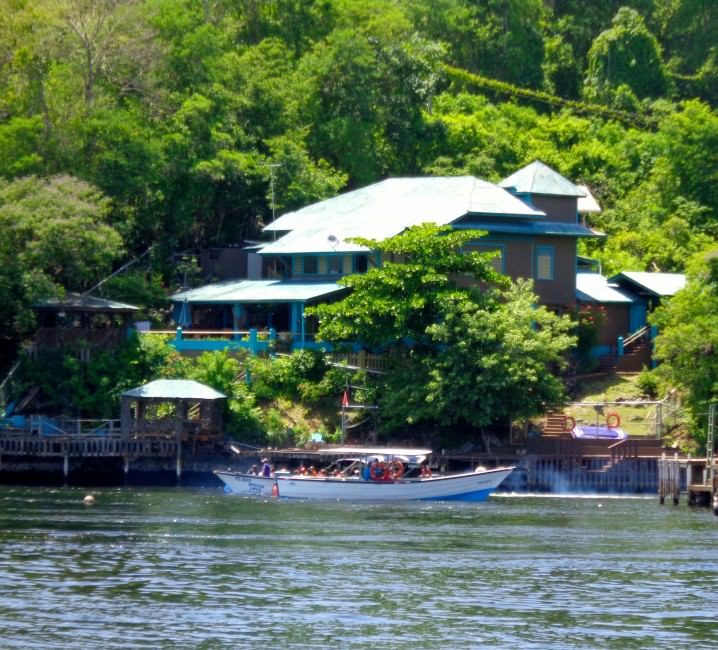 Travelling solo in Trinidad and Tobago is full of eco adventure, snorkelling, diving and gorgeous little islands. These islands in the southeastern region of the Caribbean offer something different for the solo traveller.

Trinidad is the entertainment capital of the Caribbean and is made up of many races making it one of the most cosmopolitan islands in this region. This blend of culture is evident in the country’s cuisine with curry on the southern end of the island and sushi and wine bars on the west and major religious festivals here are celebrated by everyone on the island.

Restaurants and bars in both Tobago and Trinidad have late opening hours with a wide selection of local and western dishes. You’ll find many bars along the Brian Lara Promenade but choose company for this area.

If you like crafts and farmers markets head to Queen Market in Santa Cruz on the weekends and Woodbrook for the popular “Upmarket” held the first Saturday of each month. Don’t forget to see the “Cocoa Lady,” at the Green market in Santa Cruz who makes the best cocoa tea on the island and hand-made chocolates filled with local fruits, nuts or coffee. 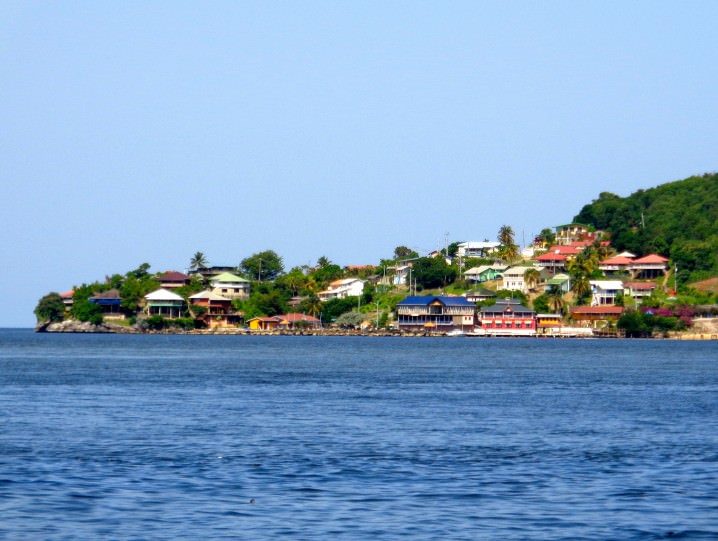 For wildlife lovers, both Trinidad and Tobago have many species of butterflies or for turtles visit Grande Riviere Bay between March and September to see leatherback sea turtles nesting. Located on an abandoned cocoa estate is Edith Falls, where you can see howler monkeys, parrots and a waterfall on the 30 minute hike.

See hummingbirds at The Royal Botanic Garden then head to The Magnificent Seven, a group of mansions at the corner of Queen’s Park Savannah constructed from limestone, marble and even a Venetian-style palazzo. The Parliament building has a fascinating mural of its island’s history and should definitely be seen if you go to the capital.

Make sure you visit the Waterloo Sea Temple on the west coast which has an interesting story. For some Trinidadian culture, Cleaver Woods is 45 minutes east of the capital and is a nature reserve dedicated to Trinidad’s original inhabitants – the Amerindians where you can see a traditional Amerindian House. 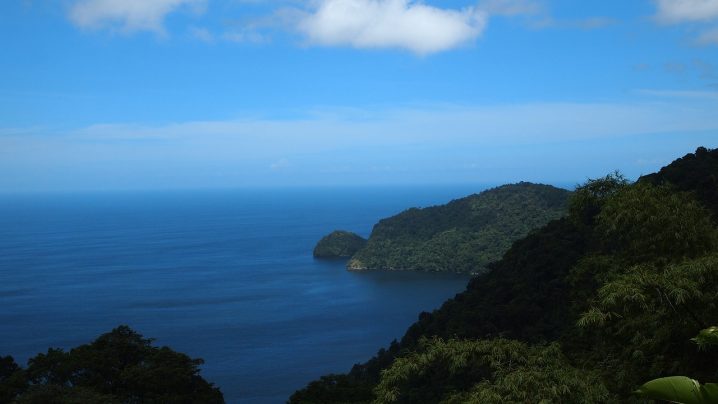 Trinidad is geared up for eco adventure and has so much nature to explore. See the mud volcano at Devil’s Woodyard, the largest natural asphalt lake (Pitch Lake) at La Brea, and Pointe-a-Pierre Wildfowl trust for birdwatching and hiking.

Hike to Mount St. Benedict Monastery for a great view. For nature lovers visit the Asa Wright Nature Centre, a cocoa-coffee-citrus plantation or hike in the rainforest-covered northern range with waterfalls, rivers, streams and limestone caves.

There are so many eco activities to choose from whether you prefer the thrill of zip lining in Macqueripe Bay, kayaking in the wetlands of central Trinidad or the western peninsular of Chaguaramas where you take boat tours past mangroves.

If you love the beach, Maracas beach is the most popular. Head along the north coast road for good seaside spots and picturesque villages. Blanchisseuse Bay is also a popular spot or choose Vessigny Beach in the south west for beach parties and bus excursions. Lifeguards patrol most popular beaches on the weekends, and the rugged north east coastline is a surfers paradise, within easy reach of the capital.

When in Trinidad, do as the locals do and join one of their weekend party cruises to Scotland Bay during the day, but be prepared for loud music and a rum-fuelled trip.

If you fancy something a bit quieter instead, you can cruise around Trinidad’s smaller islands instead, admiring the plush holiday homes as you sail. There are several little islands off the coast from the former prison island of Carrera to Gasparee Island with its own caves.

Chacachacare is the closest island to Venezuela and boat taxis from Power Boats at Chaguaramas take you to here or Scotland Bay and pick you up later on.

You need a permit from one of the forestry Division offices to go turtle viewing on Matura or Grande Riviera with a guide. Single entry is TT$ 5.

From November to April be careful of rip tides and strong winds in Maracas Bay. 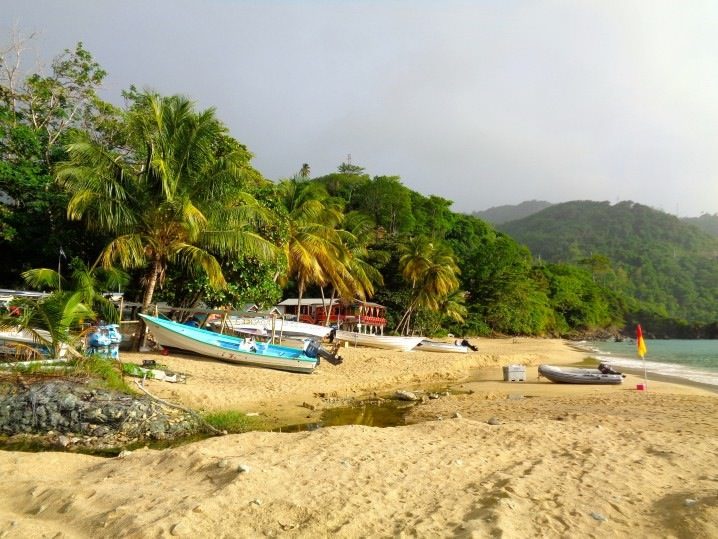 Although both islands have a different pace of life, Tobago knows how to really slow it down and is seen as the more quintessential island being smaller than Trinidad.

The Caribbean coast is perfect for diving and snorkelling and there is a Bioluminescent Bay where you can kayak at night amongst the glowing organisms. Pigeon Point Heritage Park has an award-winning beach near the famous coral Buccoo Reef with an entry fee of TT$ 20. 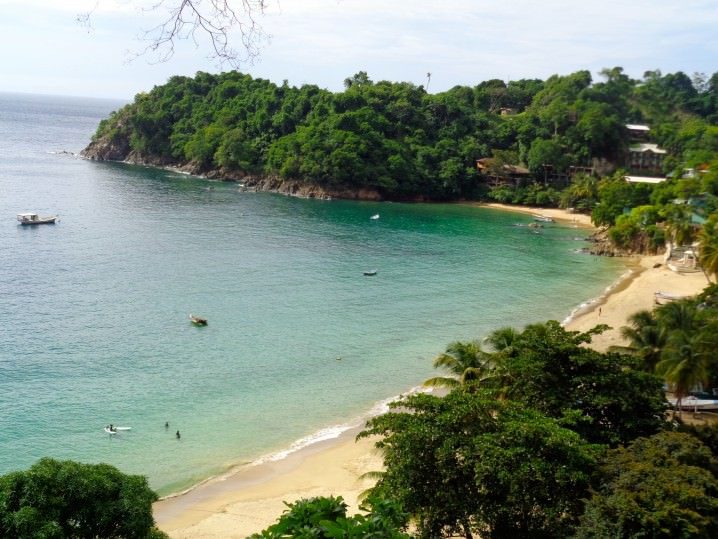 The Atlantic side has more historic places of interest with The Old Court House, Fort Granby, and Fort King George. Visit Roxborough for colonial architecture and Tobago Cocoa Estate, and Arnos Vale Waterwheel, the site of a sugar factory with ruins of an old British sugar mill. There are plenty of waterfalls to discover with Argyle being the highest at 54m.

There is more wildlife than you can count on the island of Tobago and the Main Ridge Forest Reserve is a protected forest reserve and perfect for the outdoor solo who loves hiking and biking.

Pigeon Peak is the highest peak on the island with different routes for fitness and it’s worth hiring a guide for the trails. Hop across to Little Tobago Island known as Bird of Paradise Island, one of the most important sanctuaries for seabirds in the West Indies. 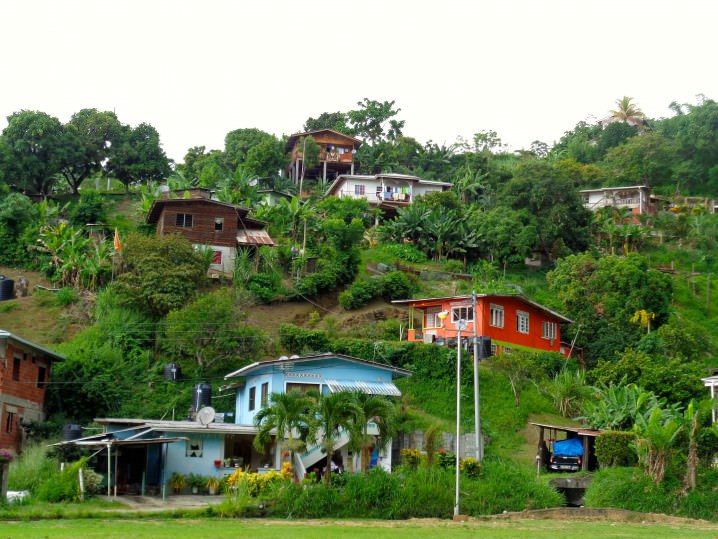 Tobago’s capital Scarborough is named after the English town but stay in one of the beach areas instead for a more holiday-feel. Castara Bay is one of the nicest bays on the island and has a nice vibe for solo females with a safe area for swimming.

There’s entertainment for solos too with Buccoo being the goat racing capital of the world and a steel band play here every Sunday, or take a boat ride from Crown Point Beach Hotel or Coco Beach as a way to meet others.

TIP – Book in advance if you’re travelling to Tobago in the peak season. For more information on Tobago, go to My Tobago.

Although most people go to Tobago and skip Trinidad, it’s definitely worth spending time in both islands. With tourism not being high on the country’s agenda, make sure you do all your pre-planning before. 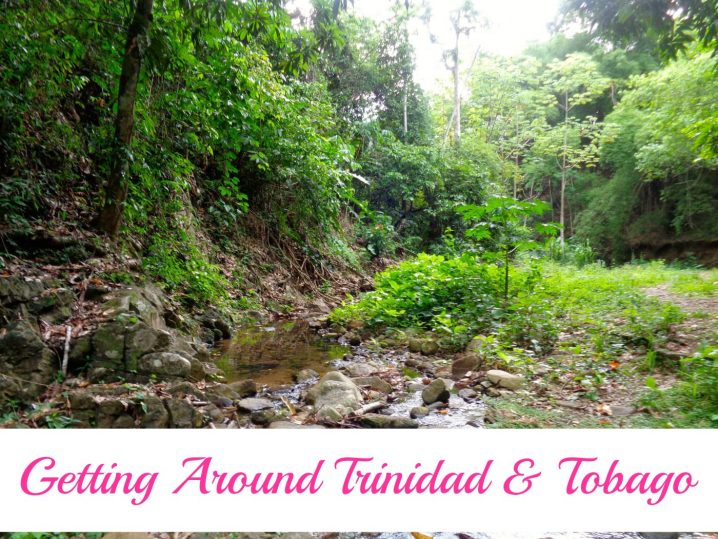 Getting Around Trinidad & Tobago

There are bus services on both islands but Tobago’s bus system is more frequent and easier to get around than Trinidad. There are lots of privately owned, Government registered, safe, air-conditioned maxi taxis.

Unlike other bus systems you don’t purchase your ticket onboard and instead buy tickets from local shops before you wait for your bus, but the bus times can be unreliable. Tickets come in bunches of TT$ 2’s so you may have to estimate how much your fare would be. The bus from Scarborough in Tobago to Castara costs TT$ 8.

There are taxis and shared taxis which pick other people up along the way and you generally have to wait for them to be full before they depart. The maxi taxis are different colours depending on the directions they run. Those with red stripes run from east to west and yellow, green and blue run in other directions.

There are no designated stops so you can flag them down anywhere. Look for ‘H’ for hire on the number plate. You can even hire taxis to take you to the tourist sights and wait for you to bring you back.

To get around Trinidad there’s a ferry that runs to the south of the island in Trinidad and only takes 20 minutes instead the hour it takes by car.

From Trinidad to Tobago you can either fly on Caribbean Airlines which have several flights a day and cost US $25 for the 25 minute flight, or take the boat from Port of Spain to Scarborough in Tobago which although it is only meant to take 2 hours, it has been known to take a lot longer.

The journey from Trinidad to Tobago is rougher as it goes against the current compared to a smoother ride on the way back. Prices are quoted in TT$  (If you fly in-between the islands, you can take bottles of water through security).

Arrange your transfer before if you can or find a licensed cab in the airport ran by the airpot and refuse a lift from people offering transport outside the terminal. From Port of Spain in Trinidad, a taxi will cost you approx TT$ 200 or you can take the bus into Port of Spain for TT$ 5 for the 30 minute journey.

You can rent a car from the airport terminal too. From Tobago airport a taxi costs approx TT$ 300 or catch the bus towards Scarborough for TT$ 6 for the 25 minute ride.

N.b Resorthoppa operates a cheap airport shuttle that will take you to the city centre or your hotel.

You could easily spend a week in Tobago so to combine both islands, look at staying for at least 10 days or two weeks.

Below is a weather chart of the annual weather in Trinidad & Tobago to help you plan your trip.

This is accurate at time of writing but we appreciate things can change. Please let us know if you experience anything otherwise. Thanks…

Events and Festivals in Trinidad & Tobago

Did you know? Trinidad’s carnival is one of the most spectacular carnivals in the Caribbean and is held in February or March each year.

Treat Yourself at Villa Being in Tobago

5 thoughts on “Solo Travel in Trinidad and Tobago”