‘I’m Randy,’ said the tall long-haired Canadian standing before me, holding out his hand.

I tried to hide my smirk as I took a couple of seconds to answer. ‘Lisa,’ I said, shaking his hand.

‘Everyone from England smiles when I tell them my name. It means something else in your country right?’

I was now in Canada and had to keep stopping myself from wanting to speak the little Spanish I had learnt; my mind still catching up with my change of country. As much as I missed Central America, I was ready to embrace the maple country starting with a three day trip into the Canadian Wilderness.

I had been lucky enough to visit the country before, during my brief stint on a cruise ship we had docked at Nova Scotia where I had got my first glimpse of a Canadian Mountie. Now I was back and this time, I was on the lookout for a grizzly and a moose and I had pre-warned Explorers Edge who had organised the trip about my wishes.

‘You’re not heading to Grizzly country,’ they had said.

So a moose it was then.

Explorers' Edge covers a wide area in Ontario, just two hours north of Toronto. Head out of the lights of the city and you’re in an area full of lakes, wildlife and solitude. It’s a place for the naturally adventurous and I was ready for the challenge…

I had been riding a mountain bike since I was knee-high to a grasshopper but it had never made it past smooth cemented roads. Our first stop in Gravenhurst was about to change all that and I was about to get tested to the limit. 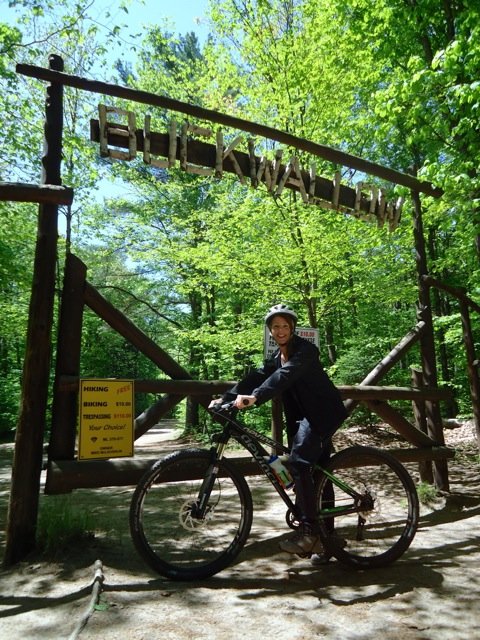 Ready for my ride…

Following the instructor from Muskoka Outfitters, I manoevered the bike like a pro, down rock faces (not very high), along narrow mountain paths (that were flat) and round sharp corners before we came to a split path.

‘Which way do I go?’ I yelled from behind, unsure of which path to take.

The bike suddenly took on a mind of its own. ‘I’ll follow the guide,’ it defiantly said as the front wheel took the unknown path.

‘This is getting narrow,’ I thought as the bushes cleared and a lake suddenly appeared with  a narrow-looking log that my bike was now cruising towards. Panicking, I kept my head up and concentrated on the end of the log, not looking down at the water below. ‘Phew,’ I thought as I made it across, my hands shaking with adrenalin.

But it wasn’t time to stop. There wasn’t just one log – there were three! I have never peddled so quick in my life, skillfully guiding the bike until I finally reached the clearing, where the guide and the rest of the group who had sensibly chosen the ‘other’ route were waiting.

‘You followed me?’ said our guide, looking impressed.

I could hardly get my breath, my whole body was shaking from what I had just done. ‘You said I could.’

‘Epic!’  he yelled and gave me a respect punch. I felt like a celeb as the rest of the group looked on with admiring glances.

I’m sure it was just a fluke! 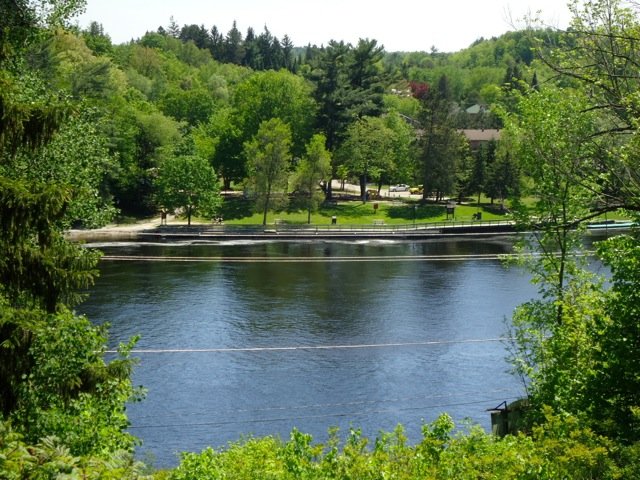 View from the Inn at the Falls

Before an afternoon of a more leisurely activity of stand up paddle boarding, where yet again I was shaking but this time not from adrenalin but from fear of not falling in the four degree water! (It’s not like the water in Mexico) we stopped at The Inn at the Falls in Bracebridge for a mouth-watering lunch of fish n chips (and yes I am a typical Brit).

That evening, after all the fresh air I slept like a baby at the Hidden Valley Resort in Huntsville with an amazing view of the lake. 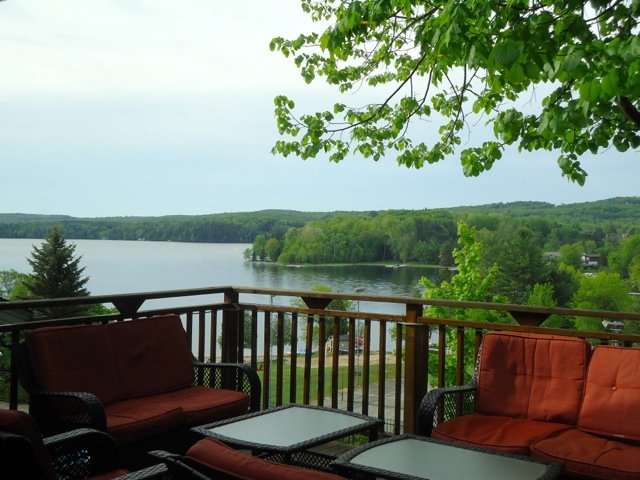 View of the gorgeous lake at Hidden Valley Resort

After my success yesterday (i.e not falling off logs and the paddle board), I was eager for day 2 of my wilderness adventure…

‘This is a canoe?’ I asked, looking at the wooden hollow that looked remarkably like a kayak.

‘Are you sure it’s not a kayak?’ I protested, thinking that this was like no canoe I had ever seen.

The rest of my group nodded and it seemed that I was in the minority and it definitely was a canoe.

Still not convinced, I paired up with the strongest man on our team and jumped in Randy’s ‘canoe’ and off we paddled far into the Lake. I was not one for water sports but the enticement that there could be a moose on the other side was enough to get me paddling. 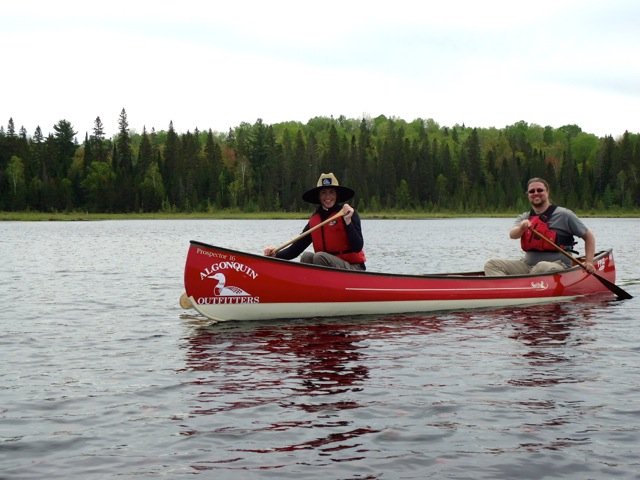 Three hours and a water taxi ride back later, there was no moose but the solitude of Opeongo Lake had won me over and I could see why so many Canadians chose to spend their weekends here.

The whole area of Algonquin Park is 2,946 square miles and is actually bigger than Prince Edward Island. The park has 1200 miles of canoe routes and you could spend days here and not see another soul (if you’re in low season) and if you’re travelling solo and need a guide Algonquin Outfitters will happily escort you on your canoeing adventure. 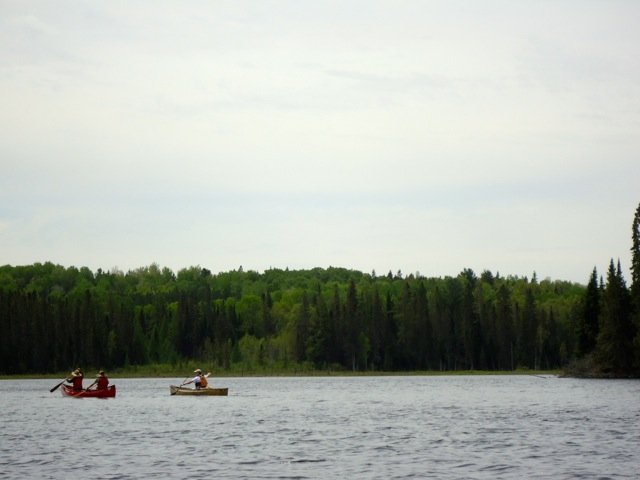 It was now over half-way into our 3 day itinerary and I had yet to see a moose. Then fate took over and one appeared from the bushes and ran out in the middle of the road as we were making our way to Sunny Point Resort for our overnight secluded cottages.

Excitedly we all jumped out the van to film this magnificent animal before it camouflaged itself within the trees. How on earth such a large creature can hide in trees was beyond me but it did!

I was one happy bunny and had fulfilled my moose mission, at least for today… 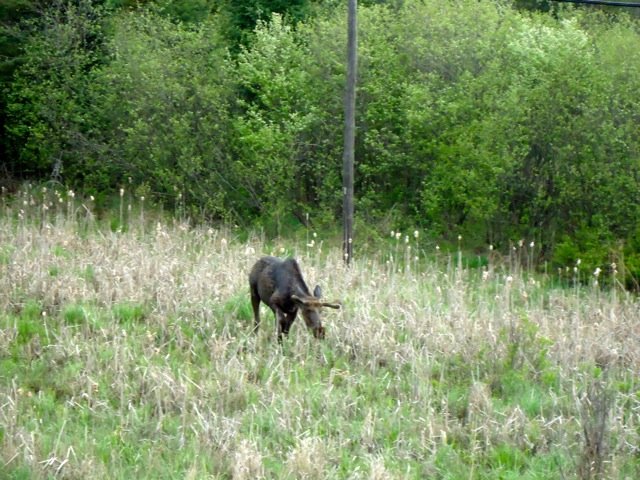 This was the day I had been waiting for! I love motorbikes and anything with a powerful engine is right up my street. 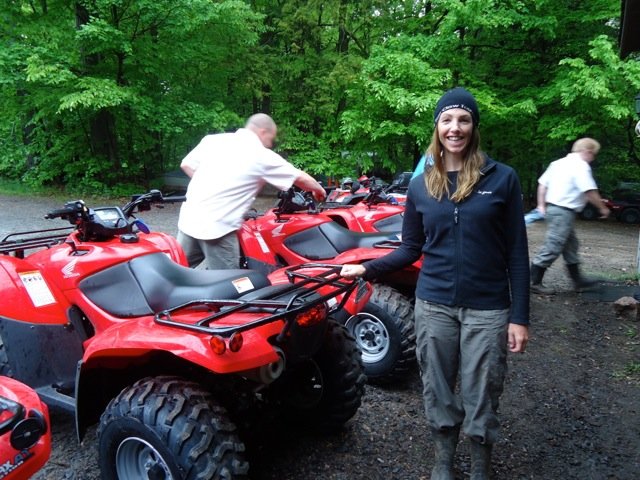 Jumping on my 420 cc Honda ATV (or quad bike as we call them in England), my adrenalin was already beginning to pump and we took off in convoy heading to the muddy trails on the Canadian Shield, part of the 1000 acres which Bear Claw Tours take pride in. They’ve actually won tourism awards for it and are passionate about the environment they operate in.

One by one they skillfully guided us over huge logs, up and down hills with me shouting ‘woohoo!’ at the top of my voice as I raised my legs high to avoid the muddy streams.

After a pit stop of hot chocolate and a tasty snack with my ATV doubling up as the ‘picnic table’ it was back on the road (or muddy tracks) as the rain began to fall. But this time we were able to go faster and I was cruising at full speed feeling the wind in my hair (well as much as I could through the helmet anyway) before we were suddenly back to the base where we had started our adrenalin adventure two hours before. 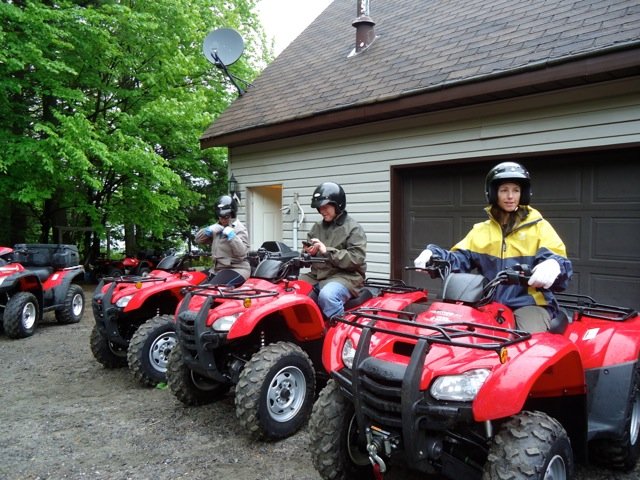 Our adventure was just a short taste of what Bear Claw Tours offer and their half-day tours are up to 4 hours long – plenty of time to get the ATV bug!

Then we were off to the White Squall Paddling Centre for a slow paddle on the calm waters of Snug Harbour which was going to be a breeze after my adrenalin fuelled morning.

As I had thought, the ‘kayak’ was actually a canoe and I hoped that we wouldn’t have to roll it before we were allowed to take to the water. Luckily they had tandom kayaks so I paired up with another travel blogger who also had no kayaking experience and was protesting that;

‘Should two inexperienced kayakers really be in the same boat?’ 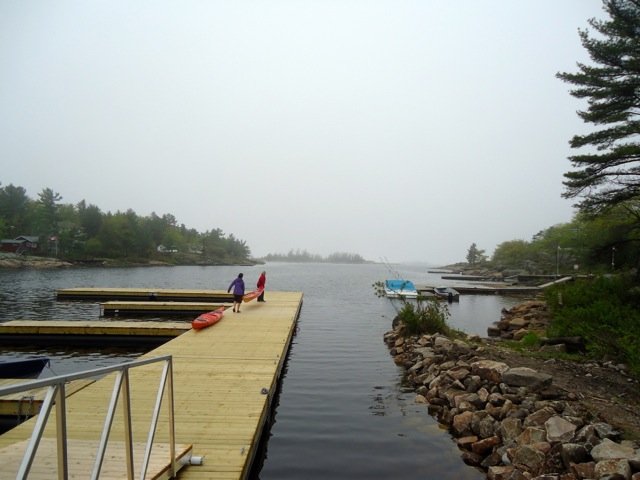 An hour later, I had won him over as in sync we paddled on Georgian Bay around just a few of the 30,000 islands that the beautiful bay boasts.

My arms weren’t even aching and the strokes were different to canoeing – using a double-ended paddle seemed almost easier to handle once you found your paddling rhythm. 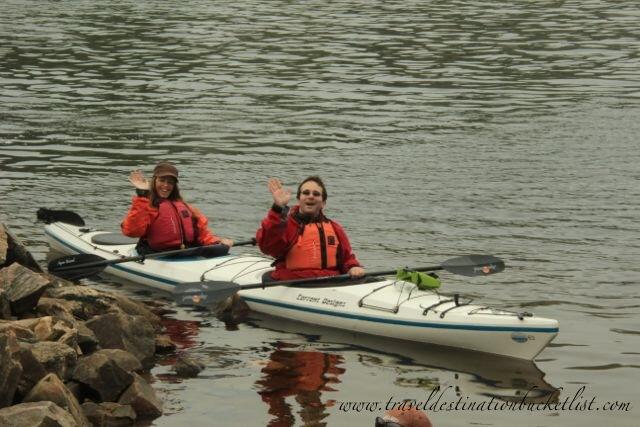 By the end of the three days I was well and truly adventured out. I left Explorers' Edge with the realisation that I’m actually awesome at mountain biking, can stand up on a paddle board, love the thrill of ATVs and enjoy the solitude of kayaking and canoeing on calm lakes. Not bad for someone so scared of water!

Algonquin Park you have converted me! See you for dog sledding when I come back to the Canadian wilderness for the winter…

My Canadian Wilderness trip was kindly hosted by Ontario Tourism and the fab Explorers' Edge who are both jointly responsible for converting me into a Canadian adrenalin junkie. As with each post I write, every opinion is totally my own.

4 thoughts on “My Algonquin Park Experience”