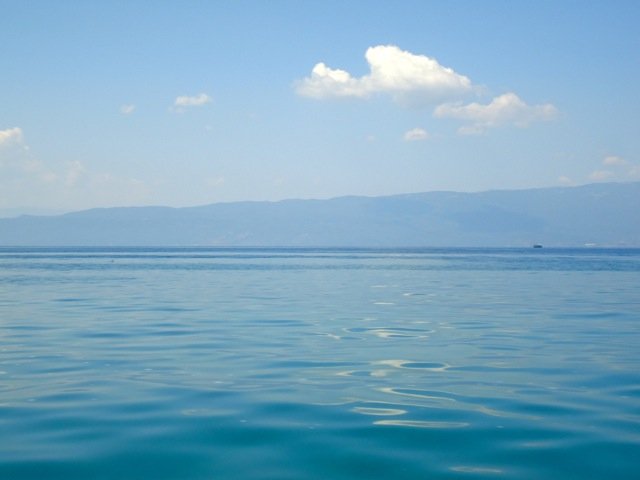 It didn’t look far on the map (no where ever does) but when it took 12 hours to travel from Albania to the lake that it shares with Macedonia, I arrived at Lake Ohrid wishing I had flown.

‘You have to go there,’ said fellow travellers as they fleetingly passed through Albania, one of my favourite countries in Europe.

So as I awoke at 4.30am that morning eager for the scent of a new country and the enticement of another border crossing, I was ready for my supposedly 7 hour bus journey with a new Chilean travel partner in tow.

I couldn’t wait to chill out by the lake, to jog around it upon my morning run and to look out across the calm waters back on Albania, the country I was now travelling through.

But travelling from Albania to Macedonia is a mission. The bus leaves Sarande, a beach town in the south of Albania at the unearthly hour of 5.30am (except Friday and Sunday) and Tomi, the manager at SR Backpackers kindly escorted us to the bus stop, which for someone like me with a bad sense of direction, can be tricky to find. 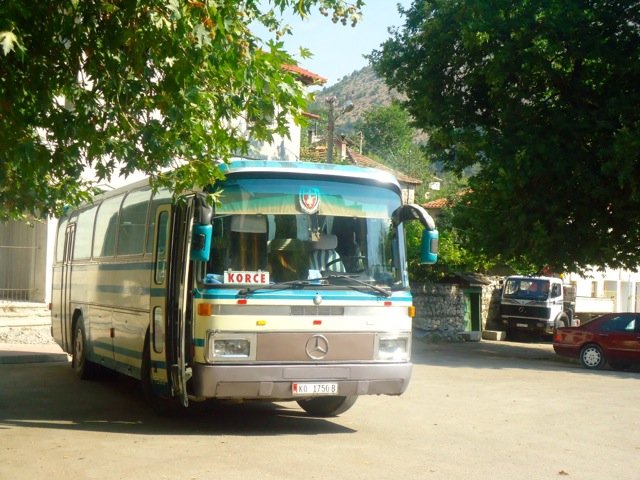 Thirty minutes into the journey the ‘cool’ air-conditioning raised its temperature and warm air blew from its individual fans. It was hot, bumpy, the roads were beginning to wind and we still had hours to go.

In some ways I think it’s easier to not know how long a journey will last. If you keep thinking you’re nearly there then time actually goes quicker and once we arrived in Korce, I was thankful to get off and take in as much fresh air as possible. The bus wasn’t going to our final destination so we took a minivan to our next stop: Pogradec, after asking several locals which was the right bus.

But when we arrived at Pogradec, we weren't even nearly there. Luckily the minibus driver took us to our next stop: Tushemisht, a small Albanian beach town near to the Macedonian border.

‘How do we get to Macedonia?' I asked.

He handed us our luggage and pointed to the border crossing in the distance.

‘I guess we have to walk,' answered my travel partner. So loaded with our bags, tired and with a lack of energy from the afternoon sun beating down on us, we walked the few hundred yards to the border, past the ‘money exchanges' to Macedonia. 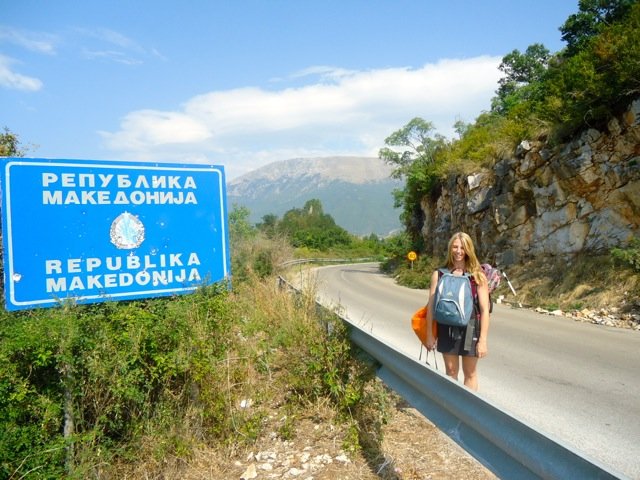 Crossing a border on foot is always a surreal experience especially when there's no one else around and you have to wait at the window for a guard to finish his tea break to stamp you into the country.

We had been told there were buses from the border to the lake but just a solitary minibus sat beyond. Running as fast as we could with 20 kgs strapped on our bodies, we caught the transport that was going to take us to our final destination.

Ten minutes down the road the van stopped. Thankful that we were finally there, we dragged out our bags and handed our €2 to a confused-looking driver.

‘This isn't Lake Ohrid,' he said in good English.

I pointed at the water that we had been driving along to our left and as a group of three ladies got into the van, I realised he'd stopped to pick up passengers.

‘Thirty minutes,‘ he added to my dismay. By this time, I was exhausted and climbed back in the van but we were so close…

As we drove, the lake disappeared from view and then he dropped us off with no sign of water in sight.

‘This is Lake Ohrid?’ I asked my Chilean partner.

Where was the gorgeous lake I had seen pictures off? We had been dumped in a street with no sense of direction for our new abode that evening. It was back to asking the trusted locals what direction we had to walk.

Twenty minutes later, exhausted and feeling as though I could collapse, we found it… 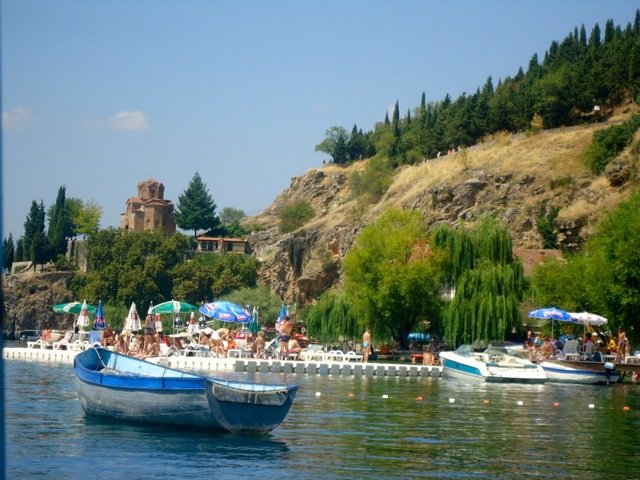 Take a boat ride along the lake

Lake Ohrid is one of the oldest lakes in Europe and is thought to be three million years old. Covering an area of 358 sq kilometres, it actually looks more like a sea than a lake and is known as “Macedonia’s freshwater sea” with two thirds belonging to Macedonia and the other third to Albania. 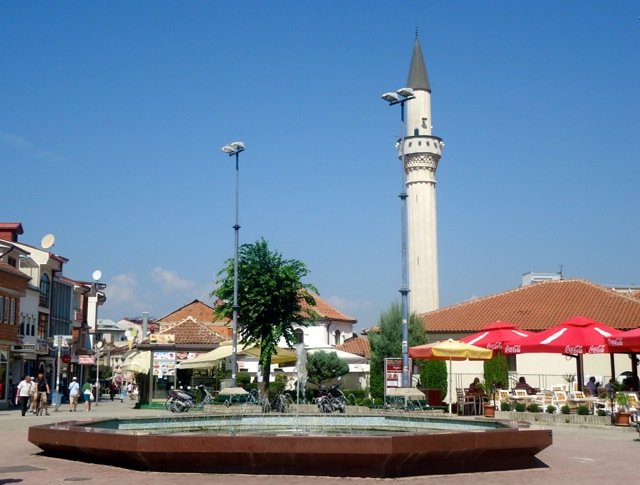 The UNESCO town of Ohrid

Although the water is tranquil, the town of Ohrid that surrounds it is a hive of activity with restaurants (the more expensive ones with a view of the lake), modern shops and many churches. There was once a church for every day of the week here.

Things to do in Lake Ohrid

Taking the free walking tour every evening (email: [email protected] to book and for times) gives you facts about the lake and takes you around the old architecture of the city to the ancient Roman theatre and the old city walls. If you're feeling energetic you can climb to Samuel's Fortress or just take a lesuirely boat ride across the lake and soak in the views. 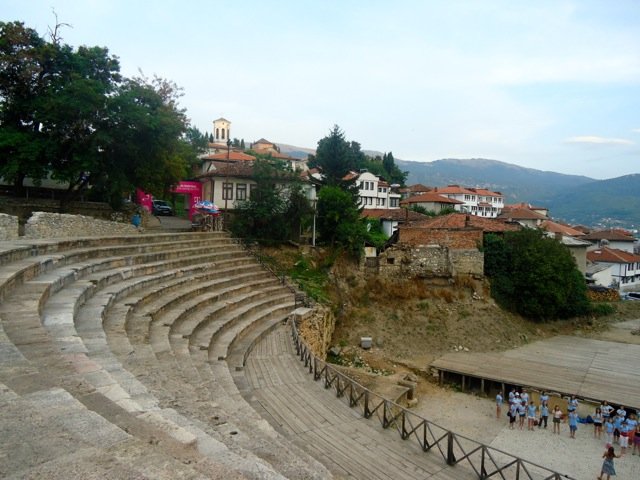 One of the must-see sights here is Saint Naum, one of the most beautiful monasteries in Macedonia. It is nearer the Albanian border so you can take a bus or even a boat to its location on the other side of the lake.

Lake Ohrid is also a good base to experience the Macedonian wine region of Tikvesh where you can visit an old Macedonian house and taste the country's cuisine.

The National Workshop for Handmade Paper is one of seven in the world still producing paper based on the traditional Chinese method and is worth a quick look then my favourite pastime: sitting on the waters edge sampling the local cuisine…so relaxing! 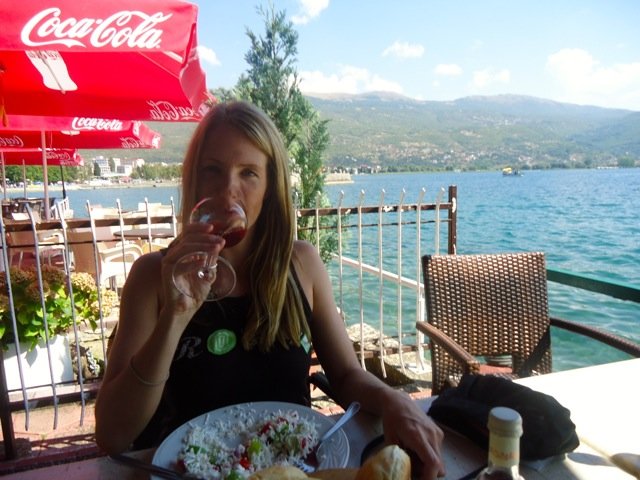 Taking in the view and sampling the local cuisine (and wine of course!)

Lake Ohrid is one of the largest biological reserves in Europe and after travelling twelve hours to get there, it was definitely worth the wait… but they do have an international airport so if you decide not to follow in my footsteps with the rustic travelling then I do recommend flying. 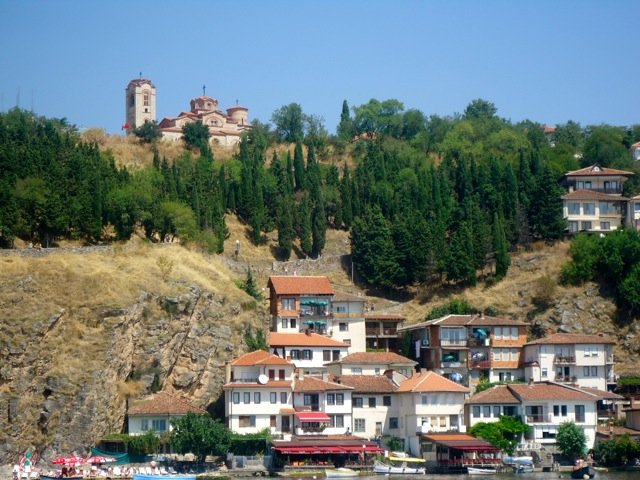 View from the lake

If you are looking for some company on all or part of your trip, Intrepid Travel is a responsible tour company which has group tours in Macedonia combined with other European countries from 10 days to 29 days with prices starting at $2280.

13 thoughts on “The Long Ride to Lake Ohrid”