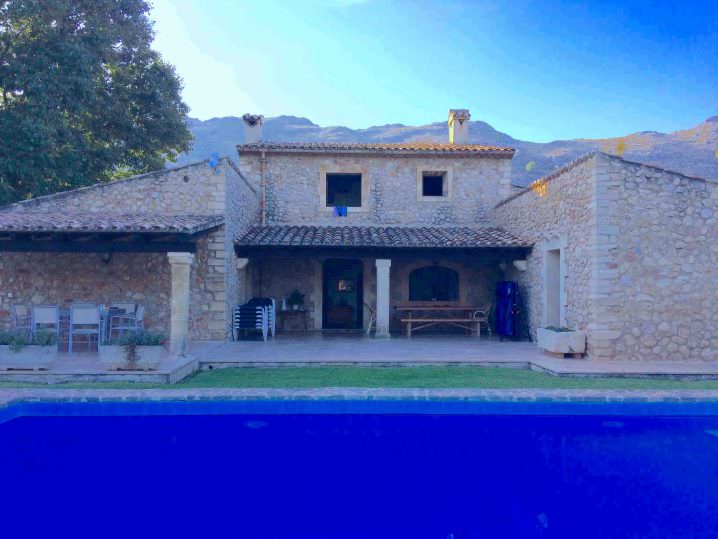 Less than an hour’s drive from Palma airport and about 10 minutes from Pollensa, down a little-used road in farming country – think olive trees; fields of brown, Majorcan goats; sheep, the odd cockerell and geese – with glimpses of beautifully restored fincas (old farmhouses) through the trees, and behind a wonderfully majestic, wrought-iron gate, lies Finca Cuxach. It’s set far enough back from the road that you barely hear the occasional passing car and have a real sense of privacy, but close enough to neighbours that there’s no feeling of being in the middle of nowhere either, which is comforting if you’re on your own.

The views are of the Tramuntana Mountains, cypress trees and lush greenery. The perfectly proportioned house itself is mellowed stone and in the five-star garden lies a crystal clear swimming pool. 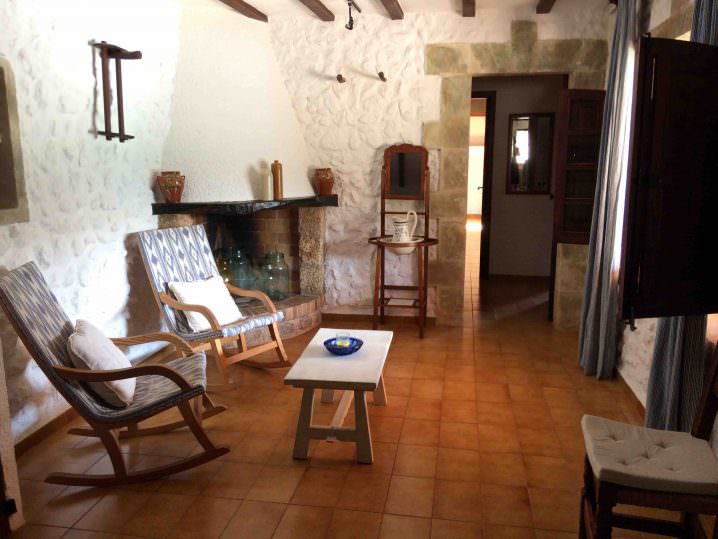 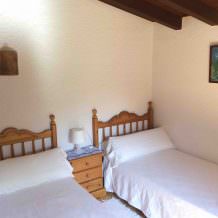 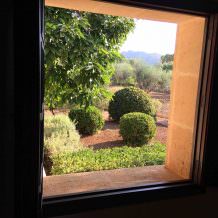 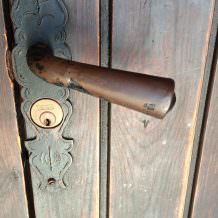 The Rooms at Finca Cuxach

Cuxach was originally a farmhouse and still retains its rustic, traditional charm: whitewashed stone walls, arm’s-length-thick stone doorways and windowsills, tiled floors and wooden beams, but with all the 21st-century comforts the clever owners could think up. For instance, the three bedrooms – one twin-bedded, two with double beds (one upstairs) – are all air-conditioned (though, come night, things cool down enough that you don’t necessarily need this); the two bathrooms (one upstairs, one down) both have bathtubs with showers, lots of sinks and storage space, and are stocked with piles of towels.

In the open-plan living/dining/kitchen, there’s wifi, satellite TV, a CD player, microwave, electric hob and oven, fridge/freezer, dishwasher, sofas and table and chairs to seat six, as well as a breakfast bar. In the central hall there’s a further sitting room and, back outside, a fully equipped laundry room (with pool towels), brick BBQ, table tennis table, lounge chairs, two tables and chairs in separate areas (lunch at one, dinner at the other?) and that all-important pool. 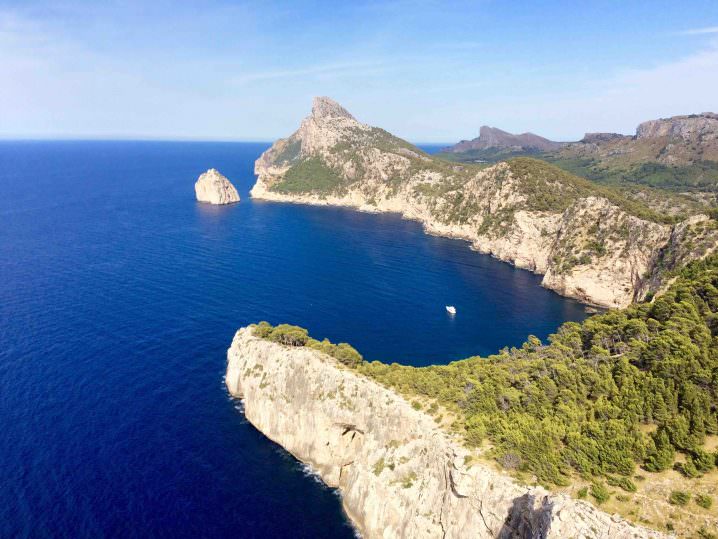 La Font, midway between Pollenca and Port de Pollenca in the north-east of Majorca, in countryside dotted with high-end villas, less than 5 minutes’ drive from supermarkets, 10 from restaurants, cafés and beaches. 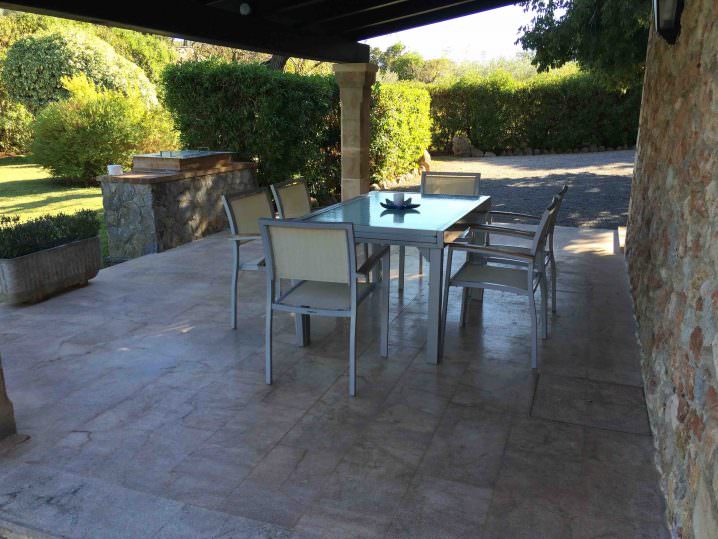 Why I love it!

Have I said that it’s beautiful? Not just the setting, in real countryside that’s a mix of green lower down and rocky grey up high on the mountains, but the house itself, which has a very pleasing symmetry of a central room and two wings, one with the two downstairs bedrooms and bathroom, the other with the living areas. It’s all done to a very high spec, so there’s no wobbly chair or window that won’t shut; also, I found it so clean it was easy to imagine I was the first to ever stay here. Finally, it’s so peaceful and pleasant and private that I just… let… go… of… stress…. 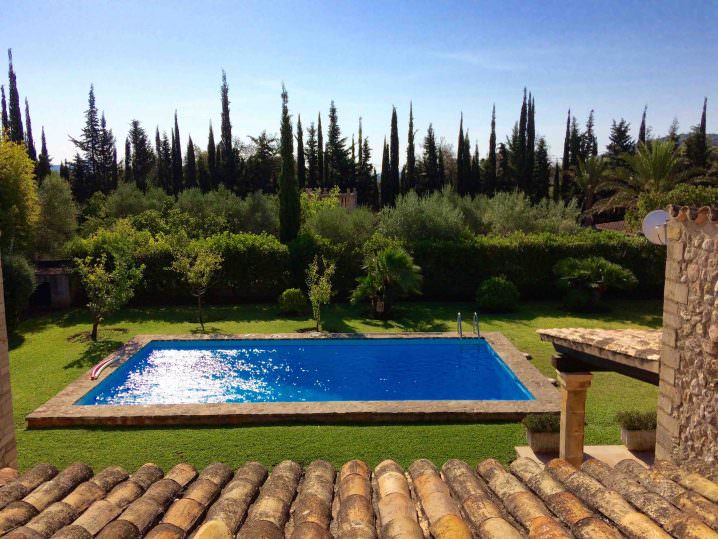 The Pros of Finca Cuxach

Security – Doors and windows lock from the inside.

Cafés and Restaurants nearby 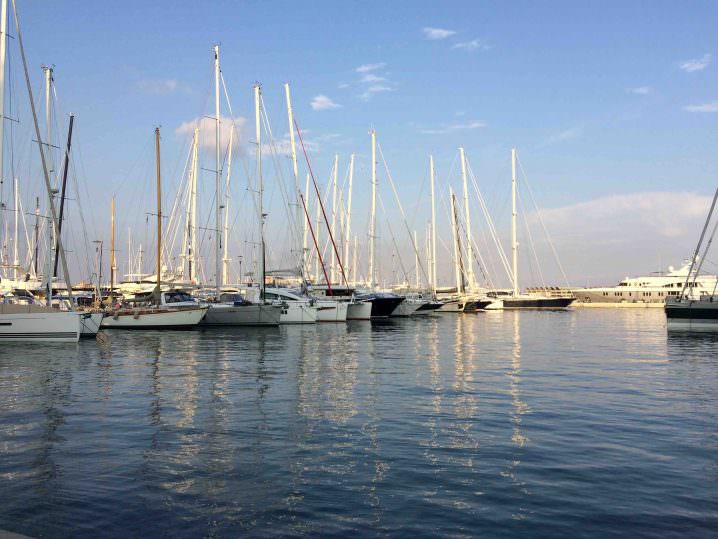 What is there to do in the area? 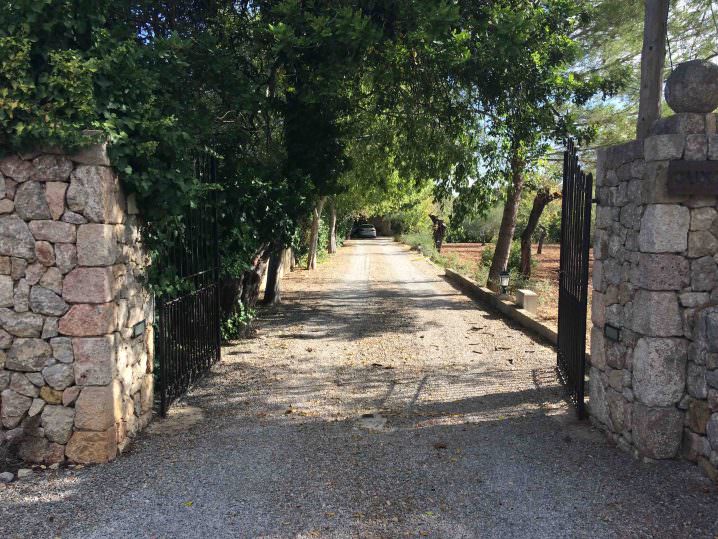 How to get to Finca Cuxach

Fly to Palma, from where a car is essential to get to Cuxach – and also to get around once you’re there. Hire from €73pw, plus comprehensive insurance (expect to pay approx €150 in total) in the airport (but definitely book ahead through the internet for a discount). TravelOpo provided the best directions I’ve ever had for finding a place and, even though I didn’t arrive until well after dark, it was easy to find. 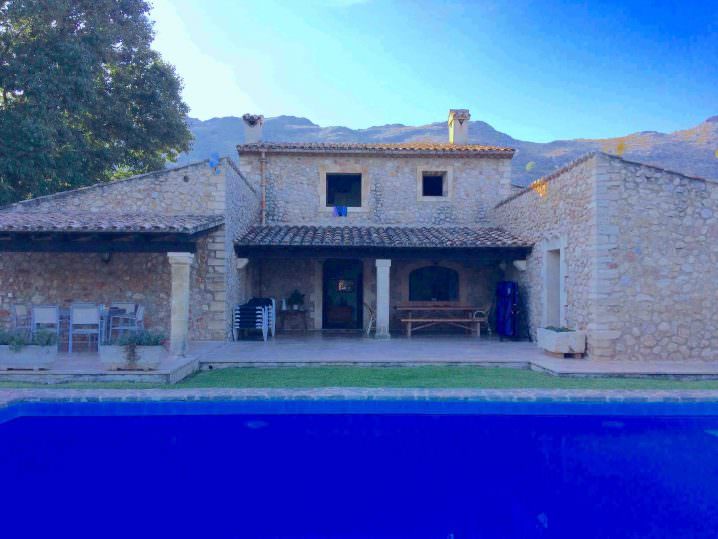 The finca is in countryside that’s a mix of farms (olive groves, fields of sheep, goats, geese) and high-end villas. You can sometimes hear, but not see your neighbours, so there’s a lovely feeling of privacy without feeling remote. You’re also near many lovely things to do and places to eat.

A car is essential and can be hired from the airport. Like any sensible traveller these days though, you’ll organise this before you land, so you can be sure of getting the sort of car you want and the best deal. 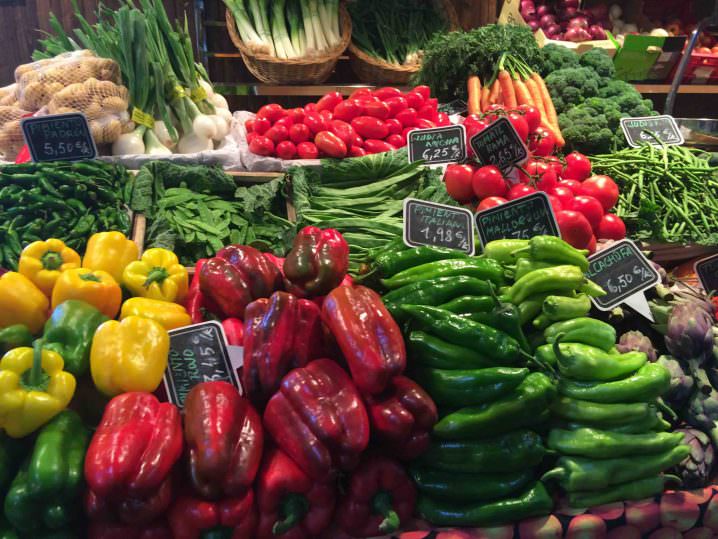 Fresh vegetables in the market 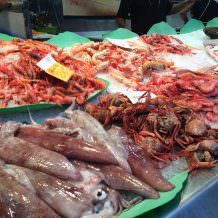 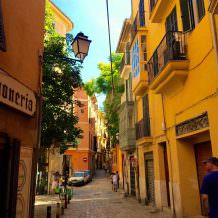 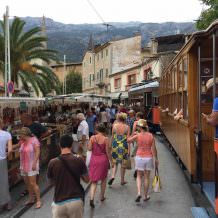 There are two supermarkets – German super-chain Lidl and local chain Eroski – right next to each other about five minutes’ drive away. Turn right onto the main road and you will see them very quickly on your left.

Local markets are a nice way to support local producers and, also, get the nicest fresh produce. There’s one in Alcúdia, about 15 minutes’ drive away, on Tuesdays and Sundays. Get there in the morning as they close up by about lunchtime. As well as vegetables and fruit, there’s plenty else for sale, from candles to leather goods to clothes and more.

For nice jewellery at very reasonable prices, visit the boutique next to the ice-cream kiosk in Plaça Major, in Pollença Old Town. As this square is also lined with reasonably priced restaurants – everything from tapas to paella to pizza and local fish – more than one very pleasant evening can be spent first doing a little shopping or at least browsing in the one-off shops down the narrow, medieval streets of this prettiest of towns, then eating dinner out on the square, followed by an ice-cream from that kiosk as you take a final promenade. Pollenca was my favourite town and is only a 15 minute drive from the finca, so an easy jaunt. 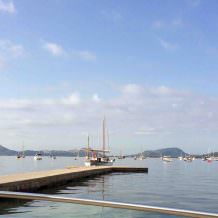 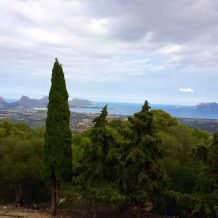 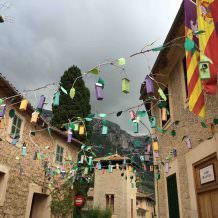 Port de Pollença, which is 15 minutes in the other direction from actual Pollença, is also worth a visit or two, both for the harbour-front restaurants, where it’s very pleasant to while away some time having a cooling drink on a comfy sofa under a café umbrella or for dinner. For this, a recommendation is Ambrosía, which serves Mediterranean-Asian fusion that’s seriously tasty eats one block in from the waterfront.

Post-dinner, Gelats Valls ice-cream kiosk is the place to go. It’s on the roundabout by the base of the central jetty that leads to the yacht club. As per Pollença Old Town, take your cone for a tour as you do the evening promenade along the waterfront.

Restaurant El Casinet, just behind the Gelats Valls ice-cream kiosk in Port de Pollenca, makes a perfect spot to stop for a cold drink on a hot afternoon and the staff don’t hurry you if you sit for a while and do some people watching. 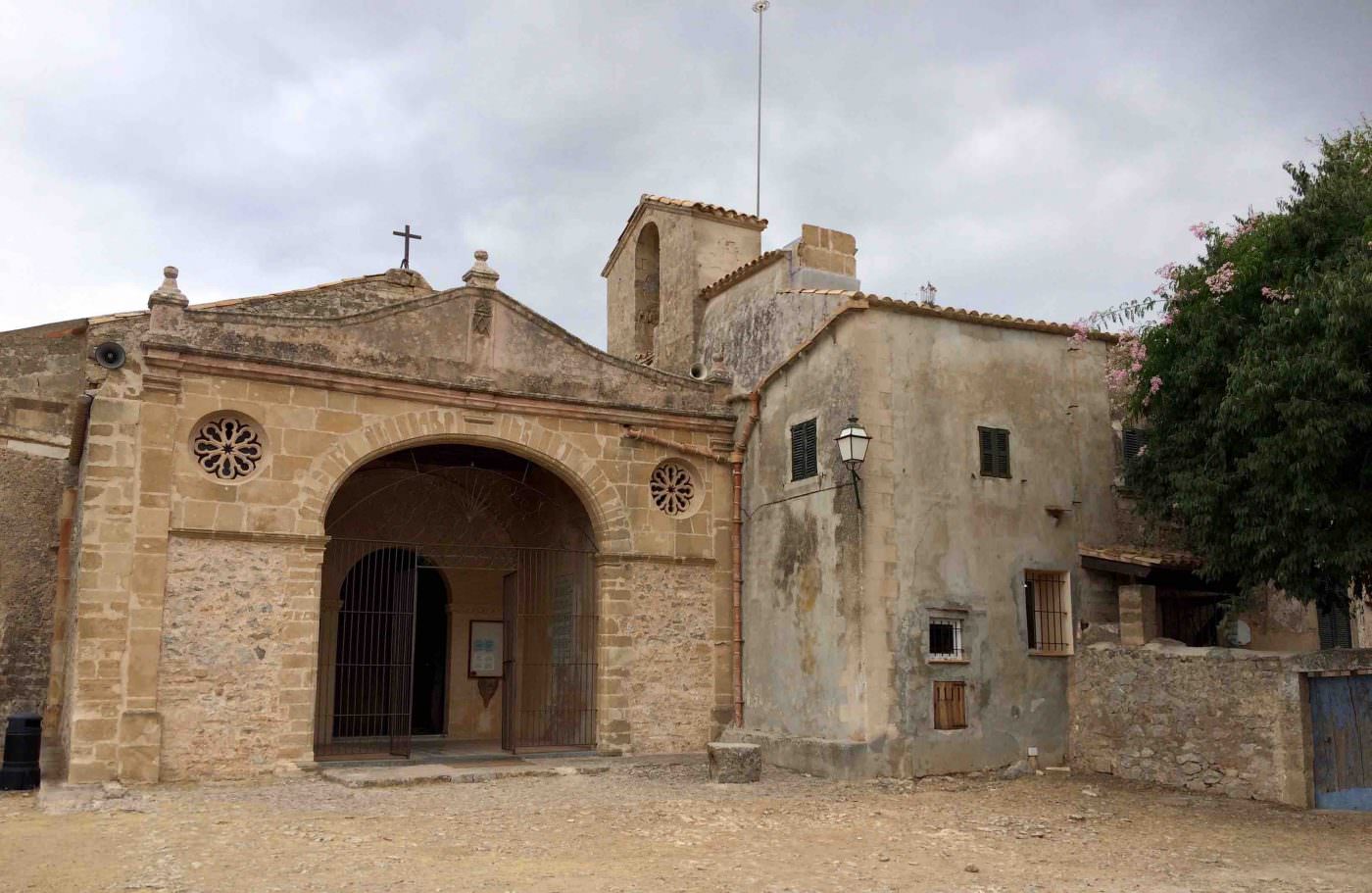 Monastery at the top of Puig Maria 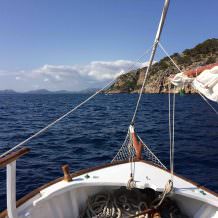 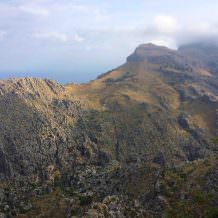 Day trips, outings and things to do….

Take a boat cruise. There are plenty on offer in Port de Pollença. I went for a half-day on the Maria Isabel, a lovely traditional Majorcan sailing boat that you book from the reception desk at the Illa d’Or (€75 for a half-day; hotel on the waterfront. They don’t take more than 12 people out at a time, so you’re not in a horde, they follow the coast down the Formentor Peninsula, stop for a swim and lunch, and then take you back. Very nice.

Drive out to the Formentor Lighthouse. Yes, everyone does it, but that’s because it’s a very beautiful route, with a couple of stop-off points for taking pictures, grabbing a bottle of water or just having a look. Be warned it is a windy road, but not dangerous and takes about 45 minutes to get to the tip.

Climb up the Puig de Maria to the monastery just outside Pollença. You can drive part of the way up (look for the little brown sign on the main road), park and then walk the rest of the way. It’s a good walk – take water – but the views from the top are worth it and there’s an interesting old monastery to wander around that now houses a cafe that opens at 8.30am for breakfast and if you can’t face the walk back down, you can even stay the night.

Swim at one of the little coves at Cala Sant Vincenç, about a 10 minute drive away. They all have beach beds and umbrellas for hire, beach bars for refreshments and public parking.

Palma, the main city on the island, is a must-do. It’s about a 55-minute drive, there’s plenty of parking and it’s a beautiful place. Ditch the car and walk along the harbour if only to gawk at the superyachts, then duck into the Old Town to visit the cathedral, enjoy the pretty streets, do a little shopping and visit the flower market.

Drive through the Tramuntana mountains to Port de Sóller, which takes about an hour and a half. You can stop to admire the views and have a reviving soft drink at one of the roadside cafes if you need a rest. There’s a lovely sandy beach in Port de Sóller, so bring your bathing suit. You can catch the old-fashioned tram here up to Sóller itself and, if you go on a Saturday, you’ll catch the market. From Sóller, you can take the very sweet old steam train that runs from here all the way over the mountains to Palma and back. However, if you’re not a train buff, a nice halfway house is to take it just as far as Bunyola, then run over to the other side of the tracks and catch the next train back.

Once you’re over in this neck of the woods, you might as well take advantage of it and carry on driving to Deià, a terribly pretty little hilltop town where Robert Graves lived for many years (you can visit his house if you like) and where Catherine Zeta Jones and Michael Douglas are reputed to have a holiday home. Take the highway back to the finca and from here it’s just over an hour’s drive.

Of course, the thing you’ll no doubt spend the most time doing is lounging by your very own crystal-clear swimming pool back at Finca Cuxach. 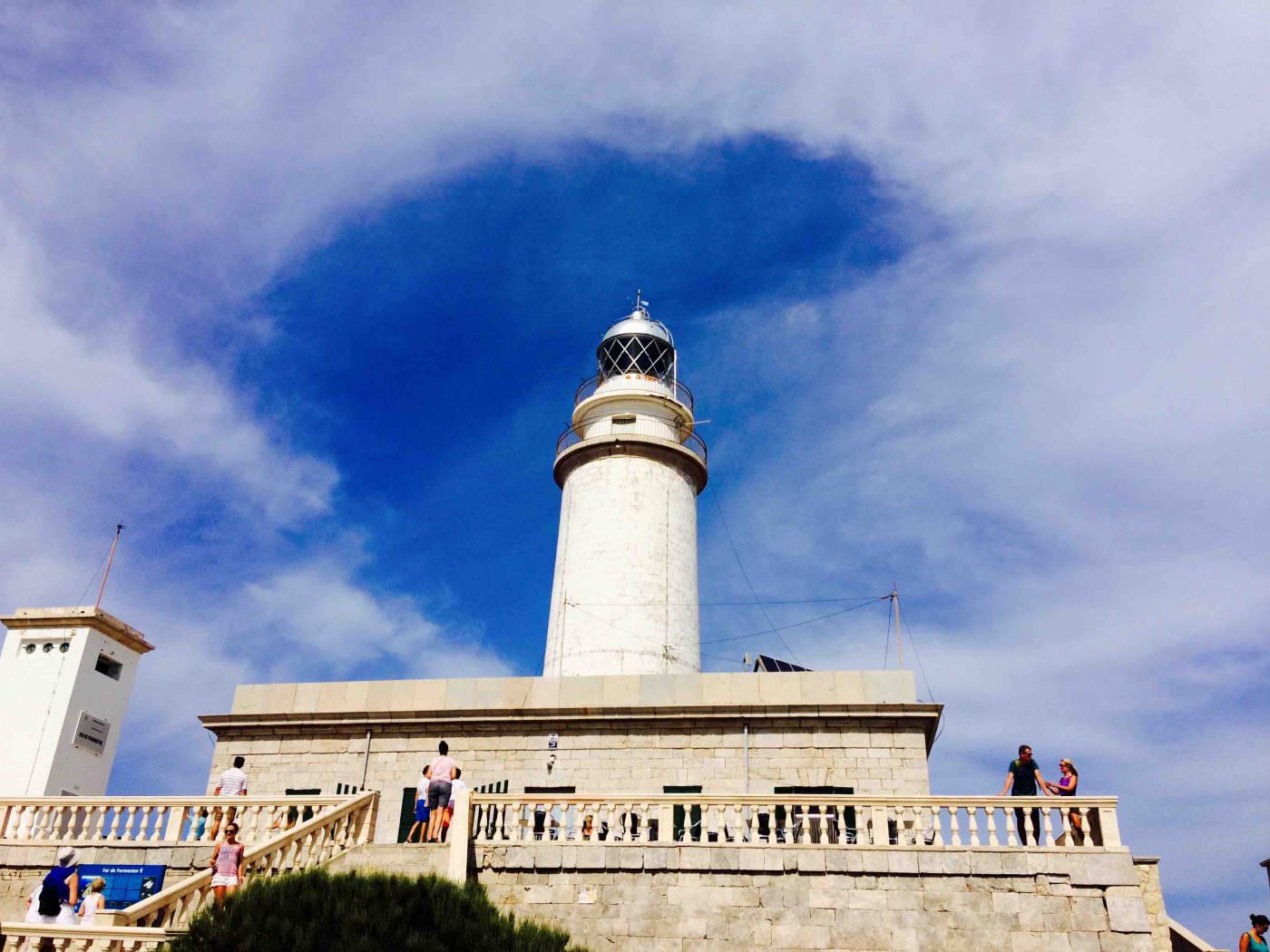 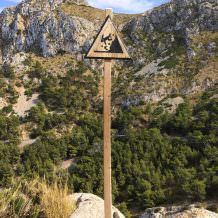 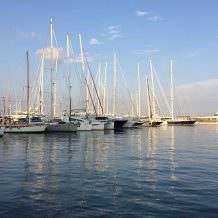 Majorca is very well organised, geared up for and used to visitors. Driving is easy, it all feels safe, you’re very unlikely to be hassled on the street and most folks speak at least some English. Also? It’s utterly beautiful.

N.b. Liz's stay at Finca Cuxach was complimentary but as always we only include the best accommodation for solo females within the hotel review section.