It was time to leave Belize and after 4 weeks of immersing myself within the English-speaking country, I was ready for the next chapter.

Crossing the border from Belize to Mexico is relatively straightforward. I was due to depart from the east coast and began my journey in Hopkins via Dangriga then Belmopan before heading to Belize City where I would change buses to the border.

Buses in Belize are privatised and owned by different companies and depending which one you get, you tend to have a very different experience…

By now I knew the drill; you hop on, the conductor puts your backpack in the back of the bus, you sit on the bench seat before a local woman and her 2 kids come and cram next to you, you start to sweat from the lack of air conditioning – the only breeze coming through the glass panes as you listen to reggae songs and other random playlists. No matter which bus you caught, you are always guaranteed a UB40 number except for the time that the whole bus sat in silence during a Catholic broadcast for a whole 90 minute journey!

I had even witnessed my first chicken on the aptly named chicken bus! It was smuggled on in a cardboard box but I definitely heard one.

I was now about to begin my Belize border crossing into Mexico and was sat on the bus entering Belize City, not a place that you want to be after dark, known for its gang-related murders, (avoid south side if you can).

I had stocked up on my snacks courtesy of the food and drink sellers who regularly come onboard selling their home-made tortillas, seaweed juice or fresh fruit.

This particular journey was an interesting one – I was sat next to a character out of a Howard Marks novel who admitted he still high from taking LSD the night before. He laughed like a jackal and made inappropriate remarks but I was intrigued about this strange character who claimed to have spent five years in a Belize jail and was a yoga instructor who had ‘contacts' in many countries.

‘Look at this jackass,' he said loudly handing me todays paper.

A picture of a bulldozer stood next to a Mayan temple. His anger apparent as he voiced his opinion about the fxxx who had been bulldozing Mayan temple for material for his construction company. As much as I agreed, his random behaviour was drawing looks from the rest of the bus including a western guy who looked at me with pity.

Luckily when we pulled into Belize City he decided that he wanted to visit an ‘old pal' in jail and decided to split. It was just me and the western guy left amongst the rest of the locals so we joined forces and stuck together for our border crossing. 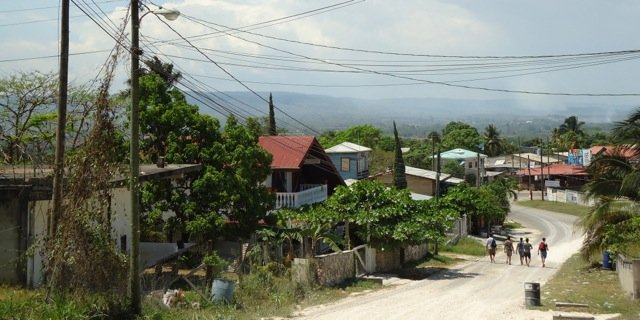 Crossing the Border to Mexico

The buses to the border seem to depart at 6.30 and 7.30pm and they were packed. So much so, that we had to stand and wait for an hour before getting a seat. The bus even stopped at one point after the doors flung open and the sound of a thud on the road indicated that someones bag had fallen off. I was hoping it wasn’t mine.

Then within two hours we arrived at Corozal, the last stop in Belize. We were confused, the bus had claimed to take us all the way to the border but it was either a night in the town or take a taxi to Mexico.

I had come so far and Mexico was only another 30 minutes away, there was no other decision so I hopped in a taxi. As we crossed the border and headed for the Ado bus station in Chetumal, I felt as though I was coming home...

Taking the bus from Dangriga to Belize City costs BZ $18. From Belize City to Corozal is approx another BZ $17 then if you arrive at night – a taxi from Corozal to Chetumal across the border costs BZ $50 but make sure you have BZ $37.50 left to pay as you depart Belize.

If you are feeling dubious about crossing the border by yourself, I recommend Jorge Gonzalez, a fantastic taxi driver who will take you to the border, wait for you, then drive you to the Mexican border.

He will even help you converse in Spanish if you get asked any tricky questions in immigration before taking you to the bus station for your onward travel (via a money exchange if needed). Email him at:  [email protected] or call him on: 6336031 (Belize mobile).