If you've ever wanted to try volcano boarding in Nicaragua, stay in Leon for a few days and book a Cerro Negro volcano boarding tour. This half-day experience is an adventure that should definitely be on your solo bucket list!

I arrived in Leon with one mission – I wanted to see lava and lots of it. Nicaragua has so many volcanoes and Telica Volcano near Leon was an active volcano you could climb and peer over the top at bubbling lava.

But it appeared that the volcano had other ideas. Apparently, the day before I arrived Volcan Telica had decided to erupt. The area was too dangerous to explore and all tours there had been cancelled.

“Seriously?” I said disappointed. Apart from taking a flight to Hawaii, this was the only chance I had of seeing red, bubbling lava.

“I’m afraid so,” said the really lovely owner of Hostel Casa Ivana who had been so helpful and informative.

“How about volcano boarding instead?” he suggested in his German accent.

I accepted. ‘At least it was a volcano,’ I thought to myself as I paid for my impromptu trip. 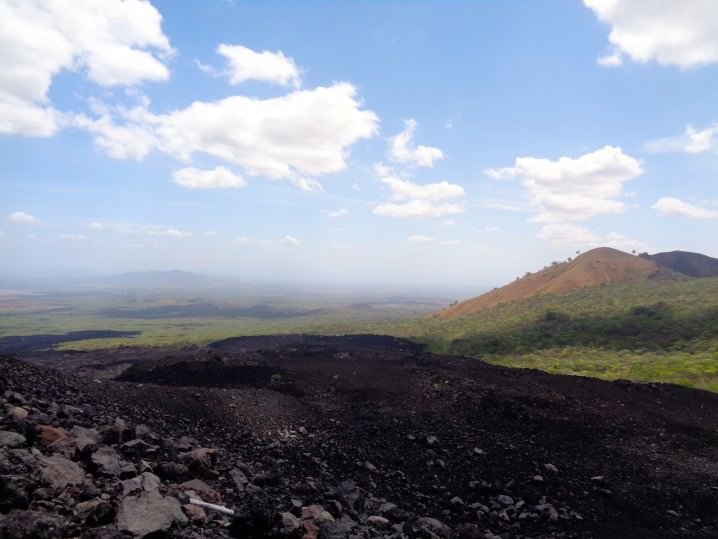 Cerro Negro is the youngest of the volcanoes in Nicaragua and one of the country’s most active. Its name translates to Black Hill, and many people come here to slide down it in the name of volcano boarding.

Having only ever sandboarded before, I was intrigued as we set off for our half-day action tour.

The driver took the minibus through farmlands for the hour’s journey before arriving at the ranger's station, the beginning of our volcano adventure.

Myself, a group of eight crazy Aussie girls and two couples, suited up and I looked as though I was about to jump out of a plane instead of slide down the side of a volcano.

The landscape was crazy. Stumbling over black and grey rocks in my jumpsuit and backpack, I began my ascent. 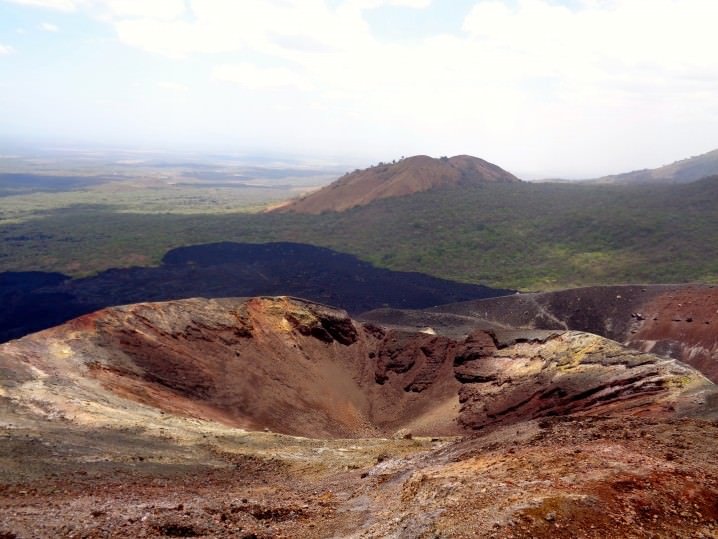 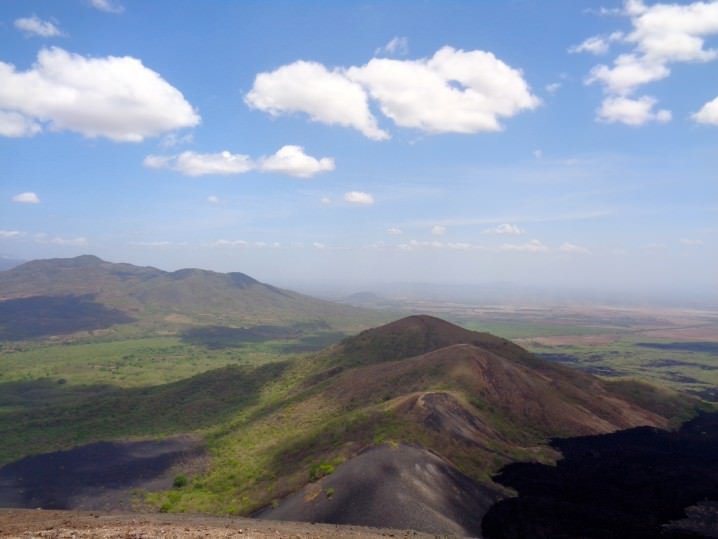 Walking To the Top of the Volcano

I had always thought of myself as being quite fit (exercise-wise that is), but halfway up the volcano with the wind howling against me, I was struggling to walk. All I knew was once I had gone back down, there was no way that I would make it back up. Luckily for me, I wasn’t the only person struggling against the winds so we stopped frequently to regain our breath.

If truth be known, the walk to the top was actually more hairy than the volcano boarding itself. Holding onto a wooden board whilst feeling as though the wind would take you hurtling off the volcano any moment was not my idea of fun

Visions of Mary Poppins with a board instead of an umbrella filled my head with each step that I took as I held my board tightly to my side each time a gust threatened to lift it.

As we arrived at the top, miles and miles of landscape opened up before our eyes. The view was simply stunning and standing on top of the volcano, I felt so small and insignificant in the world around me.

Whilst the others battled the winds to check out the steam that was coming from one of the holes, I took in the view, preparing myself for the task ahead – volcano boarding down black sand.

The side of the volcano didn’t look too bad. Granted we were high but the way down didn’t look as scary as I had initially imagined. Wanting to watch someone go before me, I waited for my turn. 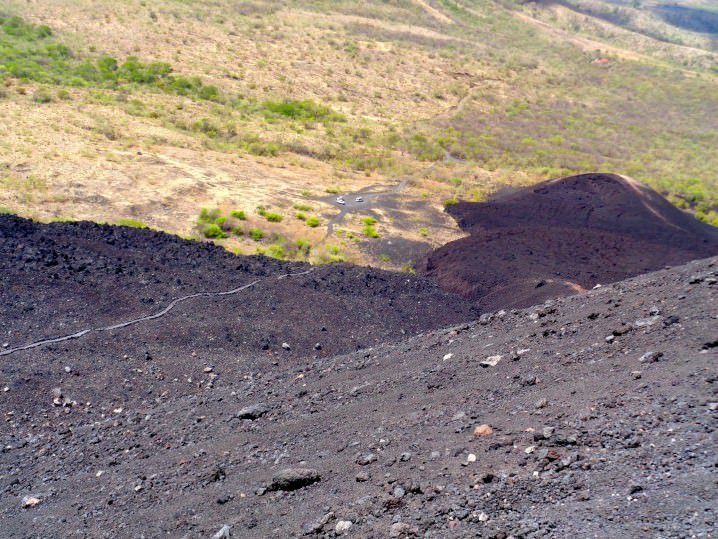 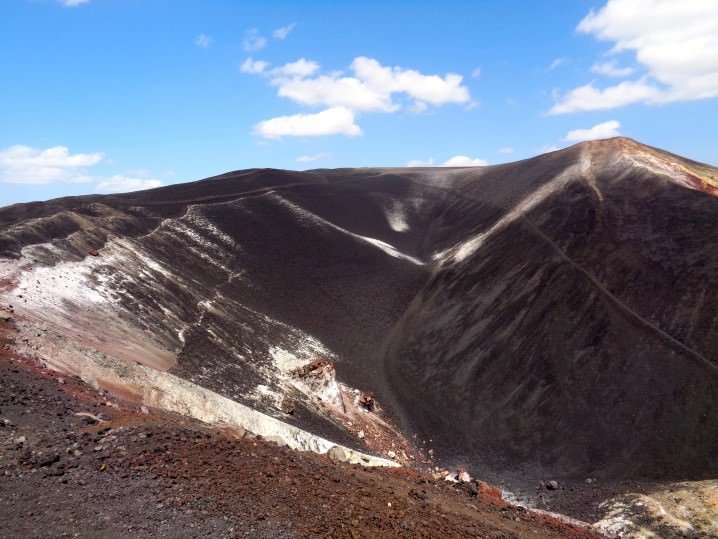 Think go-carting on a side of a volcano and you’re pretty much there. Feeling excitement more than fear, I set off, using my feet as the brakes when I gathered speed.

Thinking that I was going faster than I actually was, I passed the guide who was videoing me at a ridiculously slow speed.

As I cruised past him thinking “this is okay,” the volcano opened up and what wasn’t visible before suddenly came straight into my view. The steepest decline I could imagine and I took a huge gulp before closing my mouth preparing myself for what was about to come.

The board quickened and I fought hard to keep my legs balanced on both sides to prevent myself from going sideways. Pieces of black rock bounced off the ground into my hair, my face and my mouth. I held on tightly feeling my pace getting quicker and quicker, my only thought – was to remain on the board.

As I approached the other jumpsuits which has been specks in the distance from the top, I threw both legs out and dug my heels into the volcano to stop. I had made it! And after I spat out a few small rocks and shook the rest from my hair, I celebrated as my legs still shook.

I hadn’t seen lava on this trip but I had eaten a volcano instead – always a first!

For anyone wanting to try volcano boarding, it is one of my highlights from Nicaragua. You simply can’t go to Leon and not volcano board. 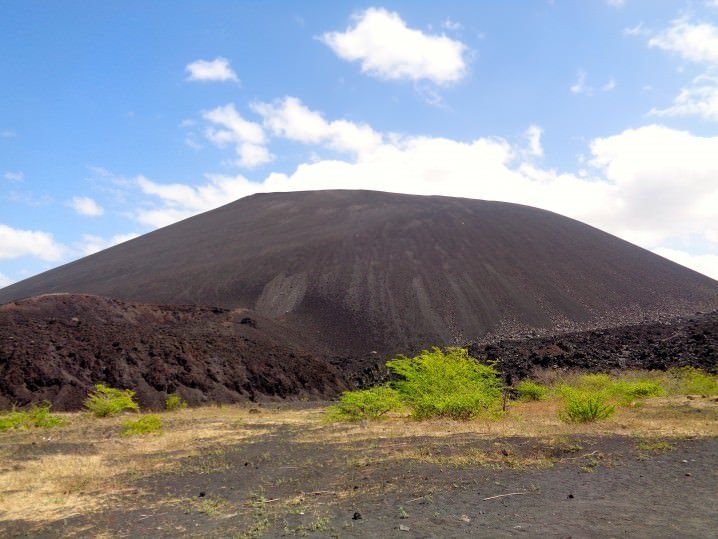 Quetzal Trekkers is a non-profit volunteer organisation in Nicaragua which organise many treks including volcano boarding. All profits are donated to locally-run projects that support at-risk children such as street kids.

I stayed at Hostel Casa Ivana which was perfectly situated in Leon and only US $5 a night. It has a really cute courtyard and I met some amazing people there. The owner is so lovely and you can book all your tours through him too. 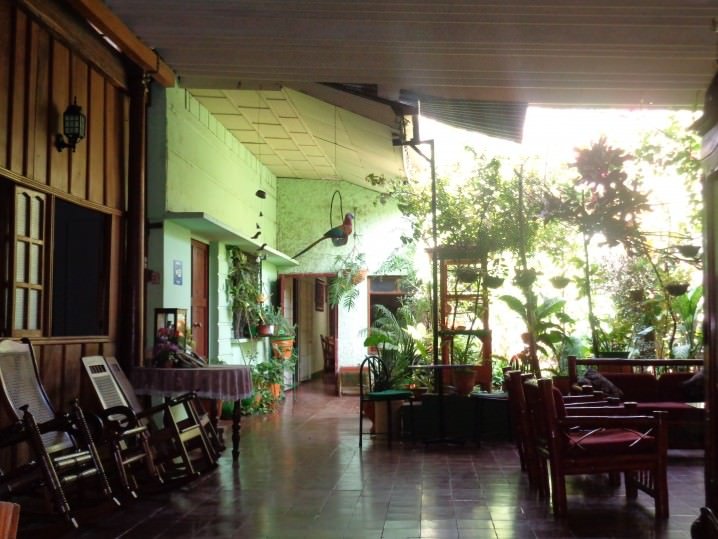