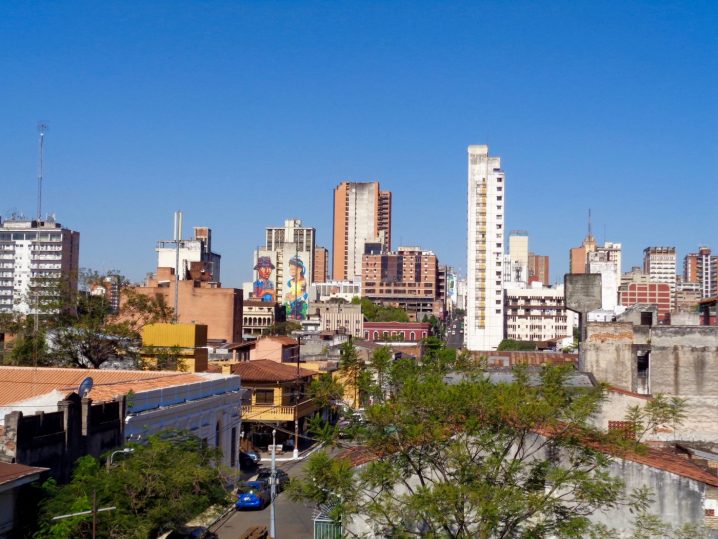 Always one to visit unusual places, I decided to travel to Paraguay. I was in Uruguay anyway so how hard could it be to travel there? Very. As I soon found out. Just because it’s a neighbouring country does not mean that flights are cheap. As with many countries in South America flying between them can be expensive. So with a flight out of the question the only other method was travelling by bus… for 20 hours.

Being used to night buses in Peru I opted for this mode of transport but it still wasn’t cheap. At £115 I did question if it was really necessary to squeeze Paraguay into my itinerary but being one to see as much as I can, there was no way that I was going to miss this country being so close to it.

Apparently normal people bypass Paraguay and head straight to Iguazu Falls. But where’s the fun in that? So I jumped on my night bus, only to be ousted off at silly o’clock in the morning to go through the first border control at Argentina. Then settling back to sleep I was again awoken as we crossed into Paraguay.

I love travelling overland. There is nothing better than crossing a border and seeing the fresh landscape of a brand new country. Admittedly it was dark but as dawn broke Paraguay came into full view.

Unlike most other night buses I had taken this one was quieter. The movie finished at a reasonable hour and there was so much room. It seemed that only a handful of people were doing the same route as me. 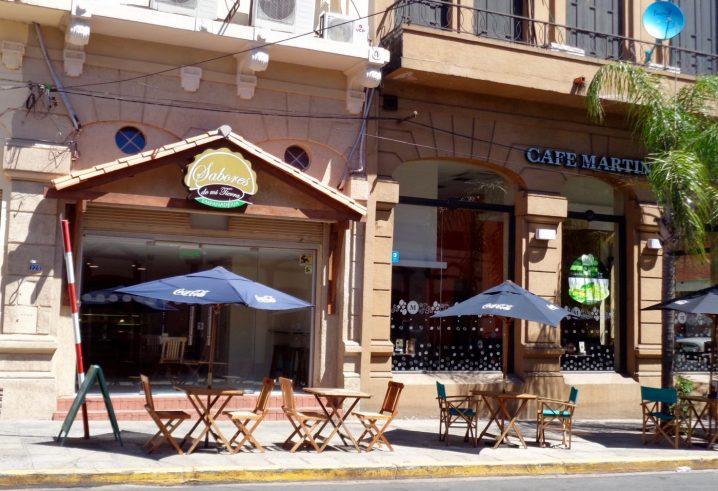 I must admit that I was a bit nervous about staying in Asuncion. All the articles I had read had basically said that it was a sketchy capital so I had no expectations of this South American city.

I know that you shouldn’t really compare countries but I missed hearing the sounds of Reggaeton blaring out and the cheapness of Colombia, and here it was. Having come from Uruguay, Paraguay was beyond cheap. I was back to cheap taxis and lunches for $3!

Paraguay is a landlocked country in South America. If you’ve never heard of it it’s sandwiched between Brazil, Bolivia and Argentina. It’s had its share of wars on the continent plus a civil war in 1947 and a long dictatorship which only recently ended in 1989. The locals speak both Spanish and Guarani which is their indigenous language.

Although it is bordered by other countries, the Paraguay River runs from the North to the South and divides the country into two regions. Asunción is the capital and is home to half a million people. Founded in 1537 the city’s full name is Nuestra Señora Santa María de la Asunción, meaning the Assumption of Mary.

So what is there to do in this South American capital?

Things to do in Asuncion 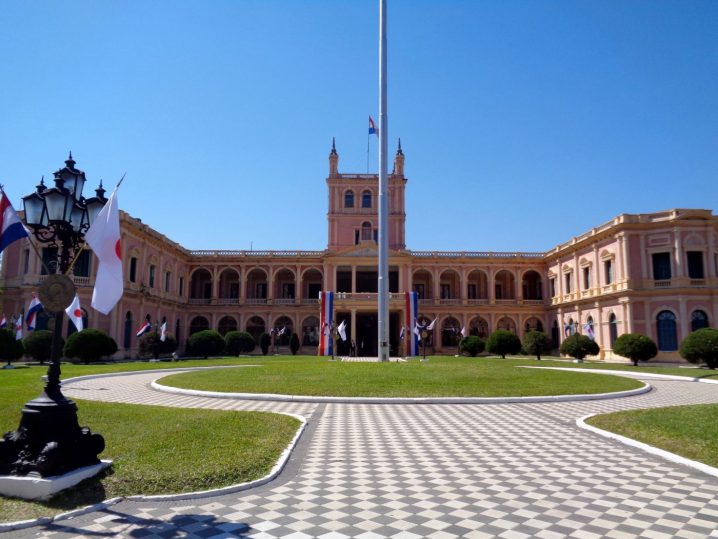 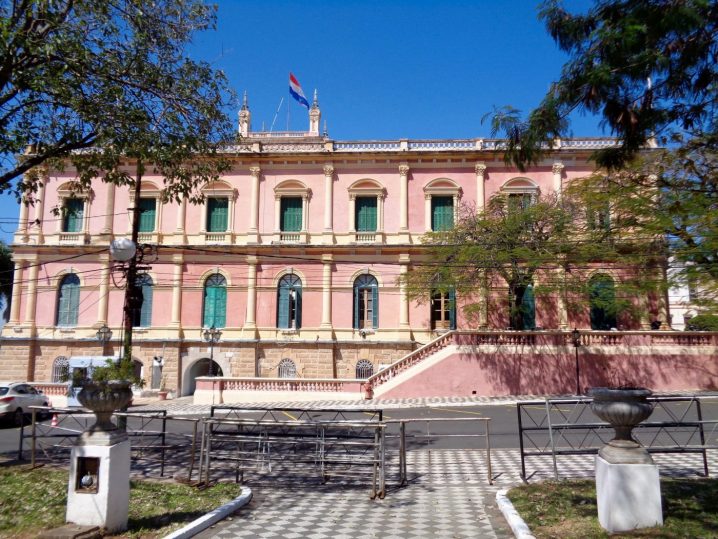 If you see anything in Asuncion, make it this stunning palace. Named after Francisco Solano López, the son of a former leader of Paraguay, this palace is undoubtably the city’s most iconic building. Located in the centre of the city this stunning building of Paraguayan heritage is also the official workplace of the President. If you get a chance to see it at night it is even prettier. 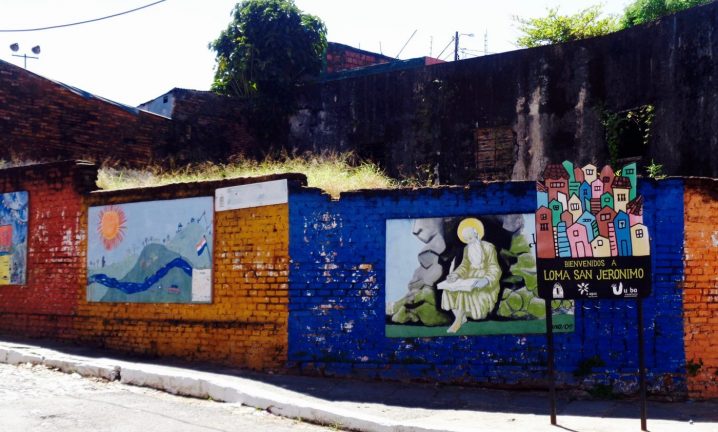 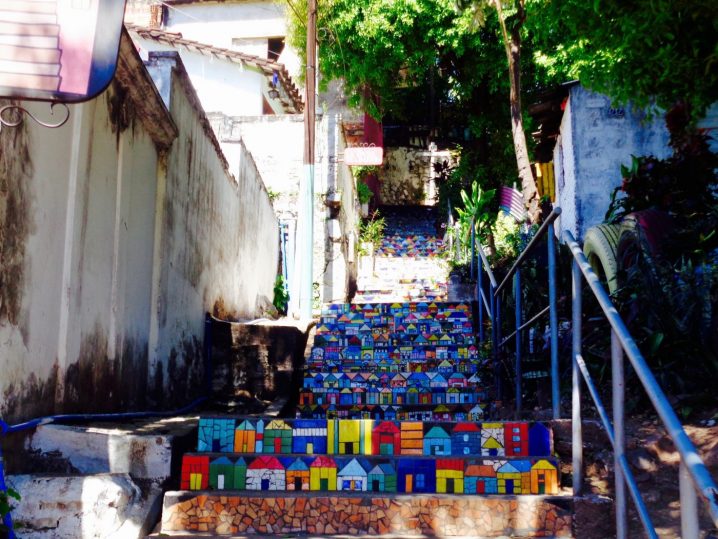 This colourful area is Asuncion’s hidden gem. Being warned not to take any money with me I was a bit apprehensive about the area that I was venturing into. Saying “Hola” to everyone who I passed, I was met with warmth and smiles. The locals couldn't have been nicer especially considering people come here to take photos of their homes. Brightly painted steps adorn this friendly neighbourhood and you’ll even find tiny houses painted on the grey steps. It takes less than 30 minutes to wander through the lanes.

This is definitely a place to come if you’re feeling a bit homesick as the colourful neighbourhood will really brighten up your mood. Just remember to be considerate when taking photos here and buy something from the local shop if you can. Loma San Jerónimo was just a 5 minute walk from Costanera Hostel Asuncion, the guest house where I stayed. 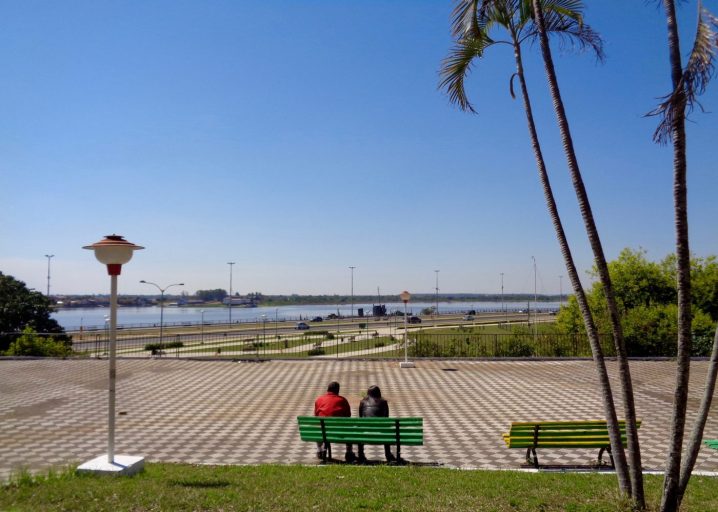 3. Walk along the promenade

If you are feeling active you can walk along Av Costanera Jose Asuncion Flores, the city’s promenade. It was recently renovated and is one of my favourite places in the city. You can rent bikes if you prefer pedal power to walking. Here you’ll find the Tourist Information Centre, a large building in the middle of the promenade where you can pick up a map and find out how to make the most of your time in the city (they speak English too!). 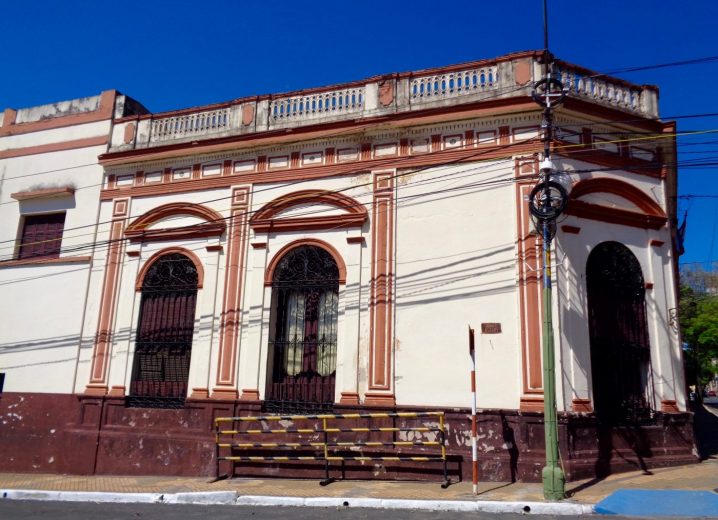 Asuncion is a mix of architecture. Colonial buildings make up part of its intriguing skyline. From the Catedral de Nuestra Señora de la Asunción, a 19th century church built with a silver chapel, to El Cabildo – a cultural centre and museum where you can explore Paraguay’s heritage amongst the many halls, the buildings reflect its colonial era. This salmon-coloured building also has a good view of the city from the top. 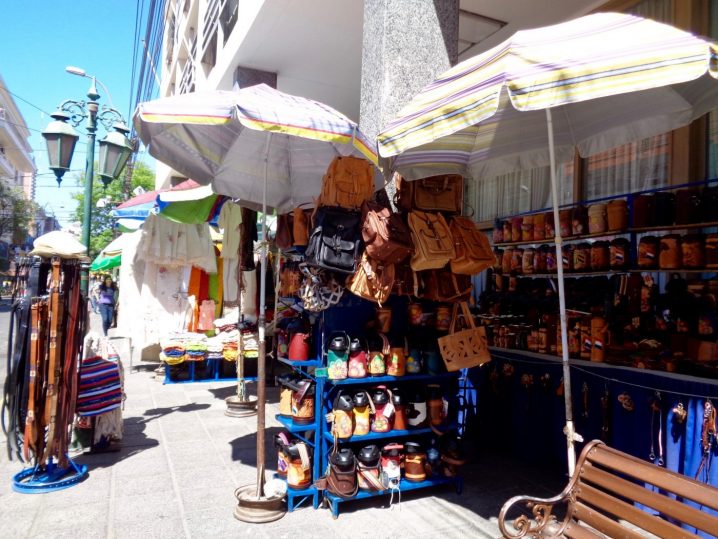 Plaza de los Heroes is a great place to find crafts made by indigenous communities in Paraguay. Colourful bags and purses line the pavements amongst modern shops.

I stumbled across this area on a Saturday and was surprised at how lively the area was. It’s a great place to buy local goods or experience local life. If you are missing Argentinean empanadas you will find them here too. If you are up for a stroll, Mercado Cuatro is about 30 minutes walk from the city centre. Here you’ll find indigenous crafts as well as other local produce. 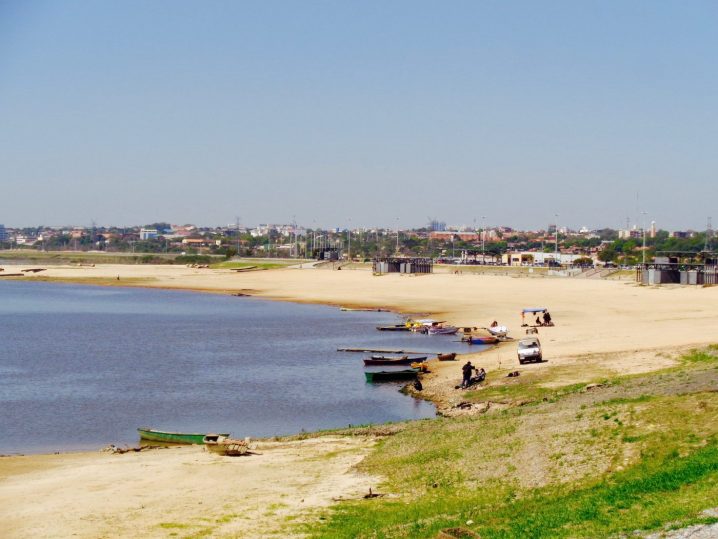 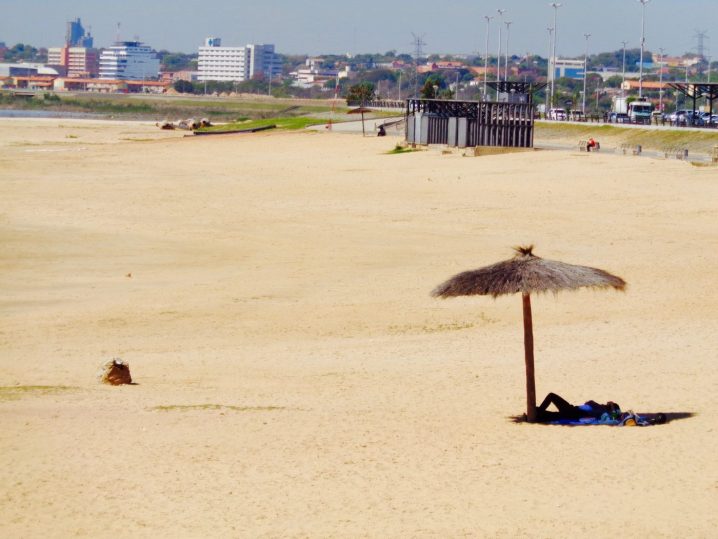 6. Relax on the Beach

It may not be near the sea but Asuncion does have a beach. Playa de La Costanera is along the promenade and although it is just a small area of sand, it is ideal to catch some rays whilst in the city. There is a small pontoon where you can watch the locals taking their boats along the river. 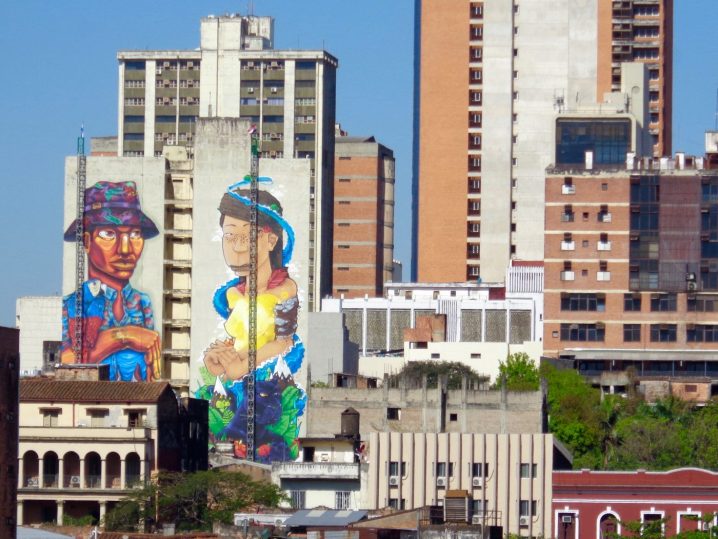 To find out more about the city’s history head to this museum. Here you can delve into 400 years of indigenous culture amongst art, sculptures and historic ceramics. It is tucked away and doesn’t look much from the outside but inside it is fascinating. The museum is outside of the city. 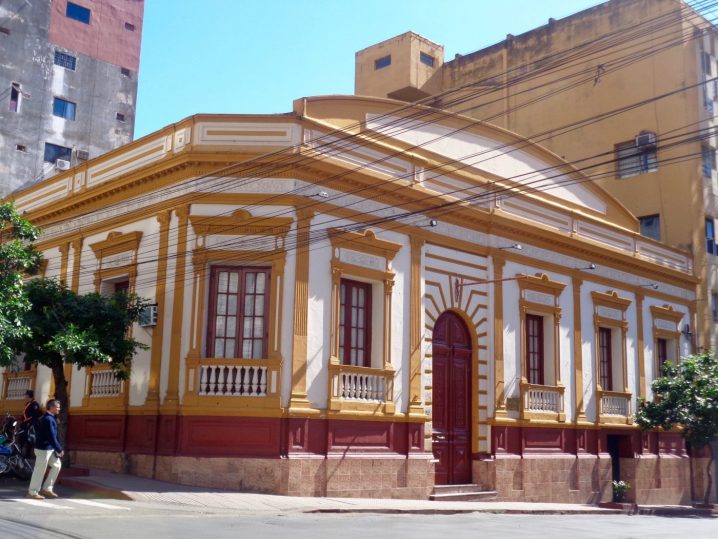 My Expectations of Paraguay

I had no expectations of this place at all and I was so surprised by how much I liked it. For one, it reminded me of Colombia. The culture seemed really similar. Two – the language was easier for me to understand. In Argentina and Uruguay the language had been difficult to follow as they pronounce their “ll” as a “sh” not a “y” as I was used to in Colombia. Three – it was so cheap! After being in Uruguay which in my opinion is really expensive, Asuncion was a breath of fresh air. Everything was cheaper which added to its appeal.

All the reports I read filled me with apprehension but the reality was completely different. I didn’t go out at night and when I explored Loma San Jerónimo, which is one of my favourite parts – I didn’t carry any money with me but I felt completely safe.

Exploring the city, Asuncion surprised me. After being initially worried about coming here I was so glad that I had. Not being a city that is usually on a backpackers list means that it isn’t that touristy. 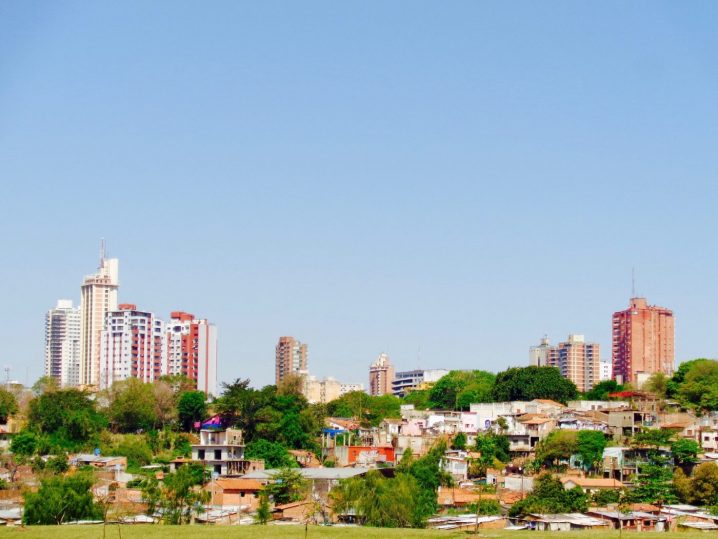 The trip from Uruguay to Paraguay was a mission. Most people choose to go from Montevideo to Iguazu Falls (you can get buses) but wanting to see Asuncion, the capital of Paraguay meant that I could either fly – which was expensive – or take a 20 hour bus journey. The bus cost £115 but it was the cheapest option.

I booked my bus with BGA and pre-bought my ticket at the large bus station (I needed my passport to book it). I left Asuncion at 13.00 and arrived at 08.30am the following morning. Because I arrived at the bus station I brought my onward ticket to Iguazu Falls to save me having to return to the bus station again before I left. 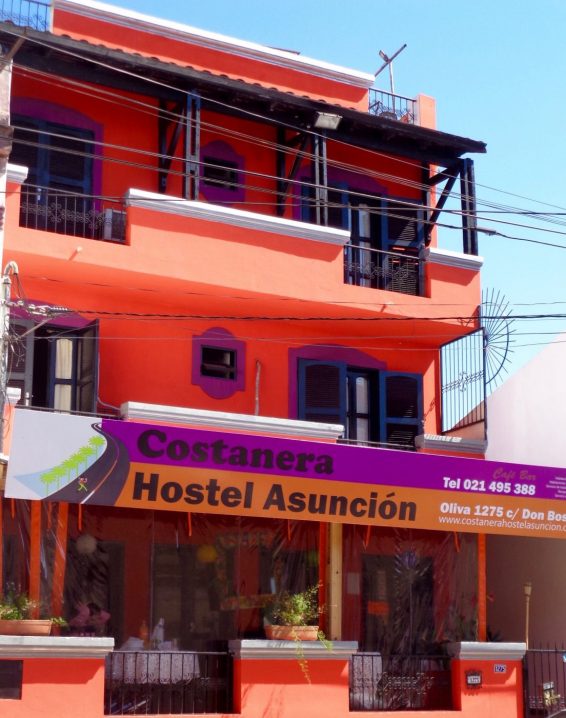 I stayed at Costanera Hostel Asuncion where I had my own private room and bathroom. Unfortunately this now seems to have closed but La Casita de la Abuela Hostal Verde has been recommended by other solos and has both private and dormitory rooms from only £6 a night.

From Paraguay to Brazil

As soon as I arrived at the bus terminal I booked my bus ticket out. From here I took another night bus to Foz do Iguacu (the Brazilian name for Iguazu Falls). This took me over the Friendship Bridge which connects Brazil with Ciudad del Este, the last city on the river before crossing into Brazil.

This is where the Brazilians come to do their shopping as it’s cheaper than in Brazil. If you do spend time in Ciudad del Este there is the Museo Historico Mensu which has artefacts from the Chaco War. 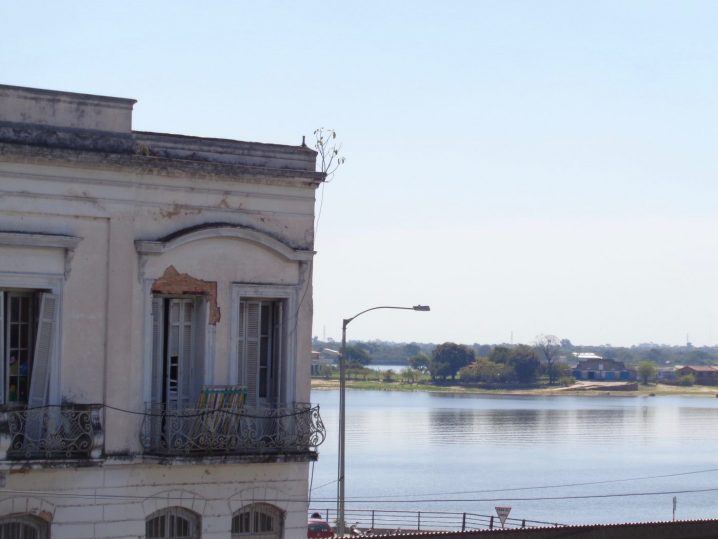 I really love this city. I’m only giving it 3 stars as it is meant to be sketchy at night and it’s difficult to meet others but if you want somewhere cheap  I definitely recommend it. This city is easily walkable and I felt safe during the day.

N.b. This page contains an affiliate link. These are of no extra charge to you and Girl about the Globe donates 10% of all affiliate sales to War Child, protecting children in war zones.