Stunning mountains, ancient architecture and some of the best wine in the world – who can possibly resist a trip to Georgia. This European country was once part of the Soviet Union and is known for its culture, and snowy Caucasus Mountains.

Tbilisi is the capital and you could easily spend a week here, dining at different restaurants, having a sulphur bath or just walking around. The city is a blend of new and old with futuristic-looking structures weaved within its landscape. It's the perfect place to base yourself and venture out on day trips.

After spending five nights in the Georgian capital, here are my favourite things to do in Tbilisi: 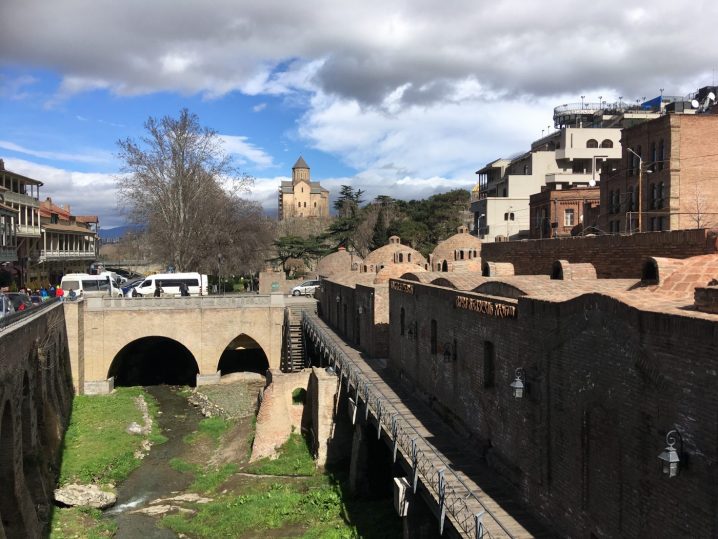 The Sulphur Baths in Tbilisi

1. Have a Sulphur Bath

If you’re ready for some pampering then the sulphur baths are calling. Tbilisi is known for its sulphur baths and healing mineral qualities. The Abanotubani district is where you’ll find baths ranging from budget to the more luxurious.

Sink into one of the hot baths before being rubbed down on a hot slab by a masseuse who exfoliates your skin. The finale is back in the bath soaking your body until the hour is up. I definitely recommend trying a sulphur bath to unwind before the end of your trip. Be warned though as people can still smoke inside. 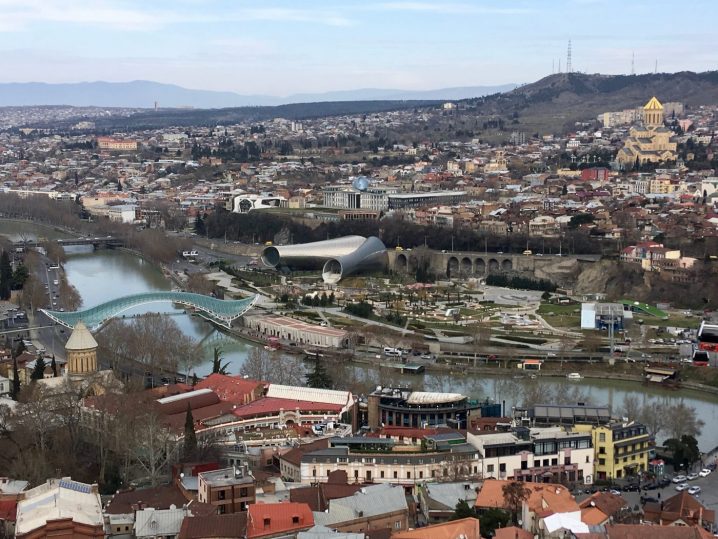 Take a walking tour of Tbilisi

Tbilisi is quite a size and can be a bit overwhelming when you first arrive. You may not know where to go or how to figure out the metro. Taking a walking tour can be a good way to navigate your way around.

Once you’ve got your bearings you can then head back to the areas that you like such as Freedom Square, or the old town. Make sure you visit the old town on the hour to see the clock puppet show which springs into action as the clock strikes.

The Peace Bridge is one of the nicest sights in the city. It was opened less than ten years ago and connects both side of the river from Rike Park where you can relax in some nature and watch the world go by. 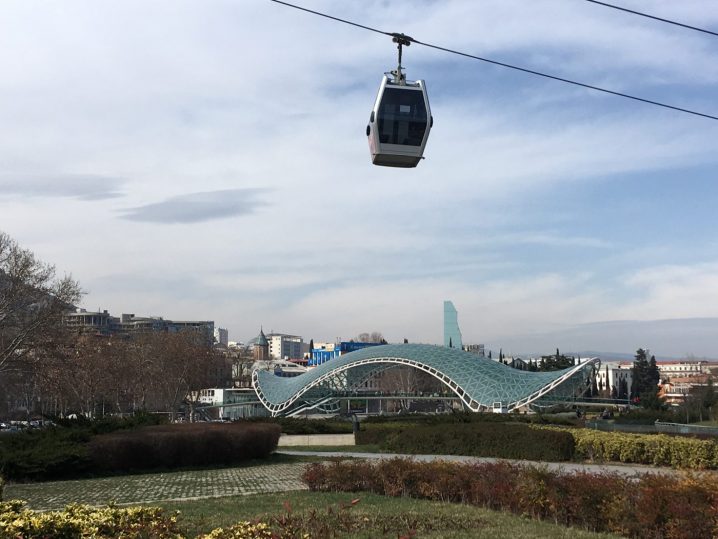 Get a birds-eye view from the cable car in Tbilisi

There’s only one way to see this city and that’s from above. For the best views of Tbilisi, take the cable car across the river for unprecedented views of the city. When you get to the other side you pass by artists and local sellers on the way to the Mother of Georgia statue, a monument from old Soviet times. If you want to purchase a souvenir from Georgia, I recommend buying it from here.

Instead of taking the cable car back across to Rike park, you could walk down instead. The picturesque stroll takes you past the castle and the zip line (great for the adventurous GatG). You may be fortunate like I was and come across a local seller who produces his own wine and Chacha , which you obviously need to sample on your way down.

You can combine your cable car ride with a wine tasting tour during a 4 hour tour of Tbilisi where you can learn more about everyday life and Georgian history. 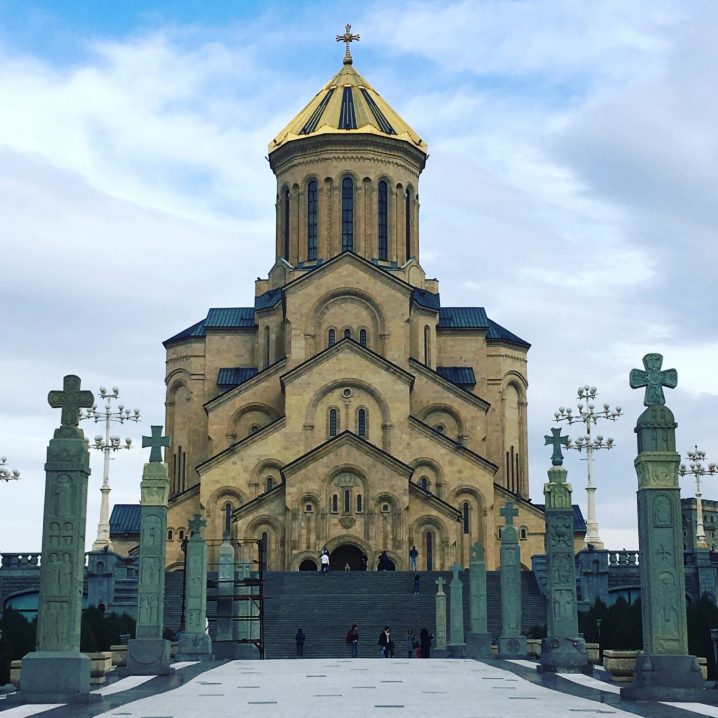 Walk up to the stunning Holy Trinity Cathedral

You can’t miss this church. As the tallest in Georgia, its golden dome is easy to see from the city. The Holy Trinity Cathedral is the third largest Orthodox Cathedral in the world and is simply stunning. It was built in 2004 and symbolises “New Georgia.”

This 101 metre high building is part of a complex which serves as a monastery and academy. There are nine chapels in the complex. What makes this cathedral even more fascinating is that it was constructed from holy places. The soil came from Jerusalem in Israel and some of the rocks were sourced from the Sion Mountain.

It is a bit of walk to get to but is worth the hill climb there. Just follow the golden dome. 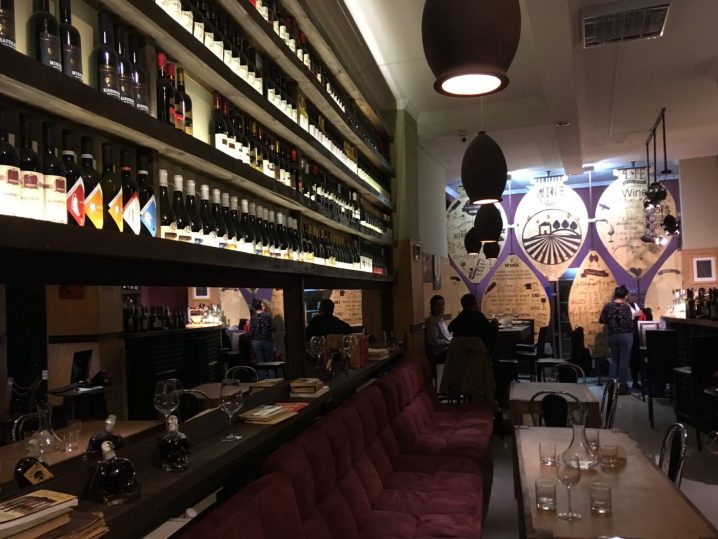 Tbilisi is known for its vibrant nightlife and growing electronic music scene. This city is bursting with beats and the Shardeni nightlife district is where its at. If you want to sample its nightlife but feel a bit intimidated about going out in the evening by yourself then consider joining a pub crawl. These run from Thursdays to Sundays and are so much fun!

You get taken to a wine bar, then an underground bar where the shots come out before heading to one of the city’s clubs. The guide gives you lots of information about Georgia’s wine industry and you get to taste some local snacks too. It’s a great way to spend an evening if you're solo.

If you prefer a more sophisticated way of sampling the country’s wine, book a wine tasting tour in Kakheti, the winemaking region. 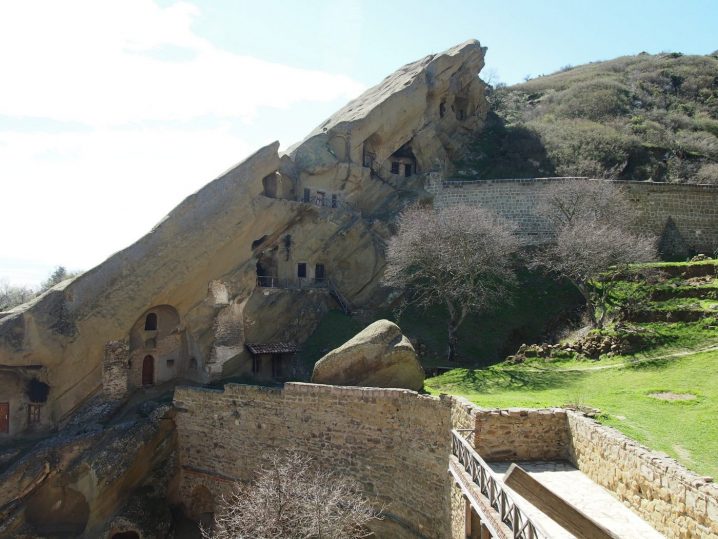 If you don't feel like carrying your bags all over the country then base yourself in the capital and take day tours from Tbilisi instead.

This monastery complex is said to be one of the most magnificent in the country. The church complex is within an impressive rock face with nearly everything carved out of rock. It was founded in the 6th century by a monk and you can wander around the 13 monasteries and see how the monks live.

If you are planning to travel overland to Azerbaijan, you may be able to tag it onto your itinerary as it is close to the border. The nearest village is Udabno then it’s a steep climb. Or take a day tour instead (but book in advance to ensure you’re guaranteed the trip). Unfortunately I was unable to see it as there needed to be a minimum amount of people for the tour which only ran on certain days. 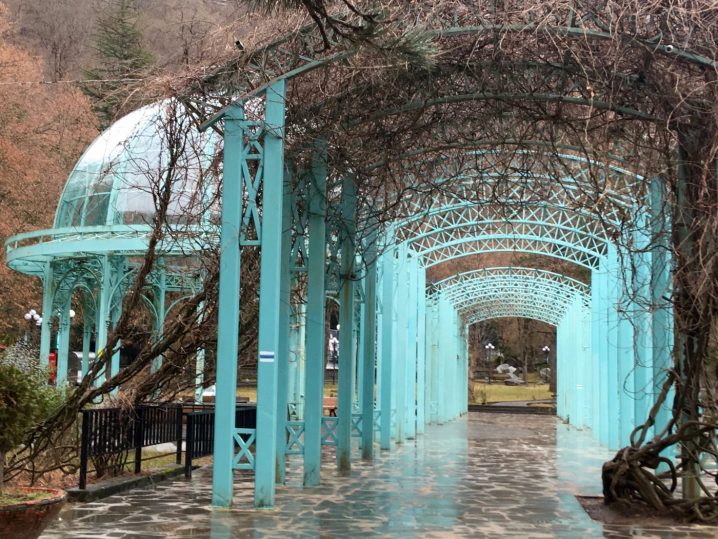 Georgia is known for its mineral water and Borjomi is one of their most popular brands. Where better to try the healing properties than at the very source on a day trip to the resort town. Rich people once built their summer residences here including the Royal family. Inside Borjomi Park is the Palace of Great Duke and a house at the entrance with turquoise stones. Drink some of the water direct from the source (or buy a bottle) if you are feeling a bit run down and you will instantly feel healthier.

As Borjomi is located in the gorge of river Mtkvari more than 150 km from Tbilisi, you can combine a trip here to Vardzia, an old cave city on the bank of Mtkvari River. 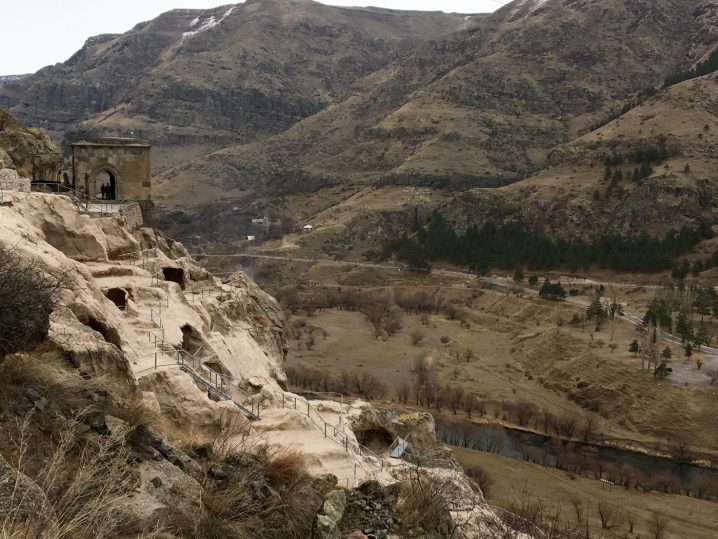 This cave city site isn’t as old as David Gareja but it is just as majestic. Vardzia dates back to the 12th century and is an impressive complex of rock architecture. Construction of the underground cave fortress was ordered by Queen Tamar and it is thought that there were once 13 levels in this stunning city.

You can spend hours exploring the cave system and the little chapels. You can see everything including an old pharmacy and even an old wine cellar as you imagine what life was like back then. Inside the church is one of the only 12 paintings of Queen Tamara. 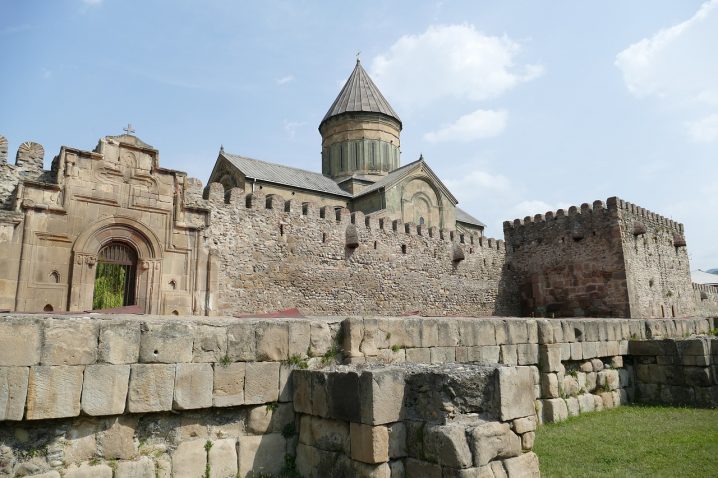 Take a day trip to Mtskheta

Mtskheta is one of the oldest cities in the country. Located at the point where the Kura and Aragvi rivers meet, Mtskheta is only 12 miles from Tbilisi. This city is so historical that its historical monuments are now a UNESCO World Heritage Site. Declared the “Holy City” it is home to Svetitskhoveli Cathedral where the robe of Jesus Christ is said to be buried.

This cathedral in addition to the Jvari Monastery are two of Georgias’s most important monuments of Christian architecture. Minibuses depart from Tbilisi Didube and take 40 minutes to Mtskheta or you can take a tour to learn more about this historical city.

The tour also includes a visit in Gori, an ancient city which was once part of the Silk Road. Gori is another of the oldest cities in Georgia. The tour also takes you to nearby Uplistsikhe so you can explore the secret tunnels of the fascinating cave system.

If your time is limited in Tbilisi and you would like to see more places, you may prefer to take this tour which goes to Mtskheta, Ananuri, Gudauri, and Kazbegi. This tour is longer and takes 14 hours but you also get to see the ski resort of Gudauri and the greater Caucasus Mountains. Kazbegi is also included and seeing the ancient Georgian Trinity Church and snow-capped mountains is definitely worth the trip. 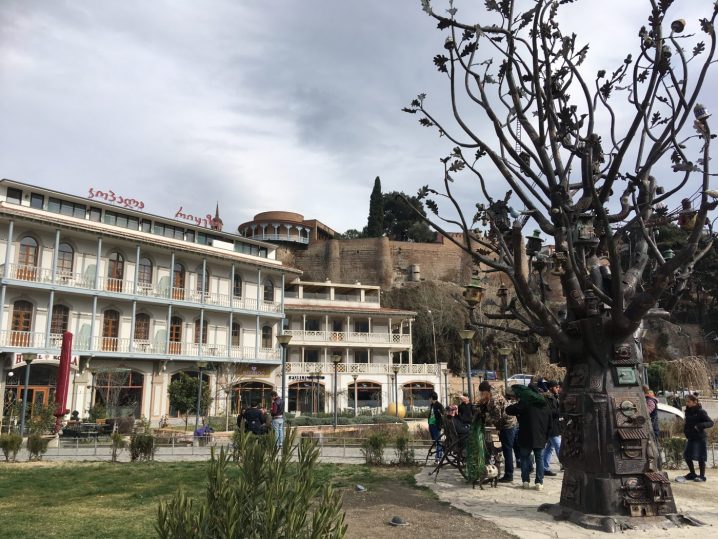 You really do need at least a week here to see everything. Don't forget to build in rest days too as some of the day tours can be hours long. If taking tours feels a bit too much, treat yourself to another sulphur bath or just spend an evening in one of the restaurants trying local Georgian cuisine with a glass of Georgian wine instead.

Is Tbilisi good for solos? I give it 4 out of 5 stars. It feels safe and is relatively easy to get around with the metro. The language can be a bit challenging but you can take day trips with an English-speaking guide for ease.