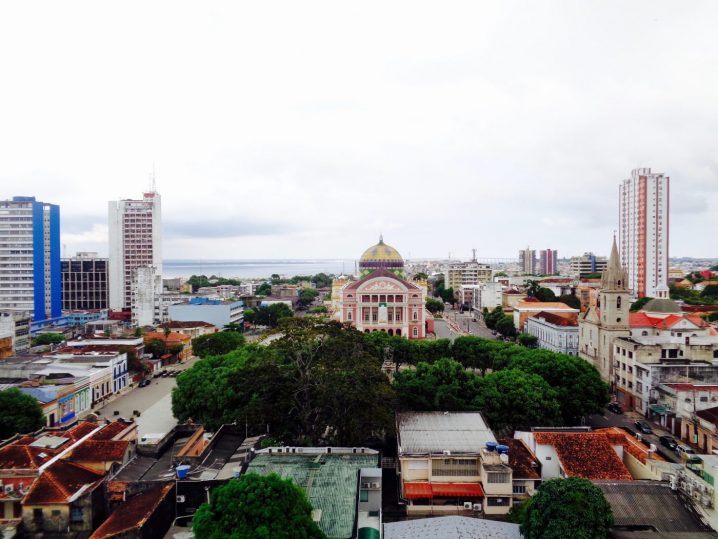 Things To Do in Manaus

I was on the last stint of my South American solo trip. Having travelled through Ecuador, Peru, Chile, Argentina, Uruguay, Paraguay, I was now in Brazil, heading to the Amazon. When I had to leave Colombia I had to leave behind my boyfriend. Now, we were about to be reunited in the Brazilian Amazon.

After 9.5 weeks, 26 different beds, 7 night buses, and 5 social-impact projects visited, I was about to unplug for 3 weeks and venture into the Amazon to fish for piranhas and watch the sunset over the rainforest with my man.

Boarding the plane from Foz de Iguazu, I was tired, excited and apprehensive, from waking at 3.30am. I had been on the road for nearly 10 weeks and although we had kept in touch via Skype, I was still nervous. As I tried to sleep on the plane so many questions flooded my mind:

Would we still feel the same when we saw each other again? Having been to 70 countries alone could I travel with a boyfriend? Could I survive without Wifi for 3 weeks! But most importantly would we still find love in the Amazon?

Visions of watching sun sets over the world’s most romantic river, spotting pink dolphins together and spending hours cuddling in a hammock made for two with no cares in the world drifted into my head. In a few hours I was about to find out… 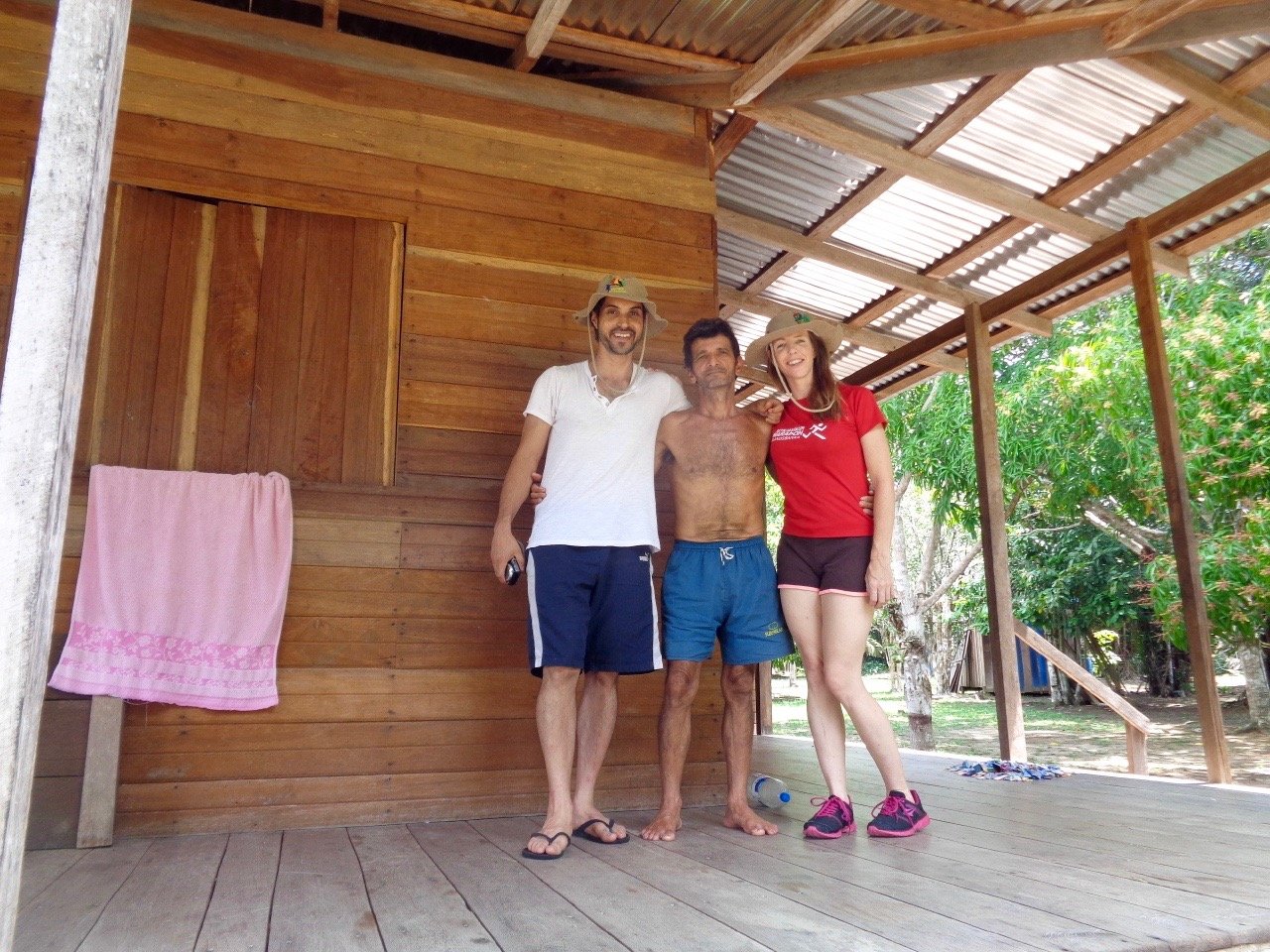 Manaus is the capital city of the Amazonas in Brazil. With a population of 2.5 million inhabitants, this city is a major port for the Amazon and is located on the Rio Negro.

The Amazon rainforest is the largest in the world. Although half of this famous tropical rainforest is located in Brazil, it also extends to Peru, Ecuador, Colombia, Bolivia, Venezuela, as well as the smaller countries of British Guyana, Suriname and French Guiana.

Expecting something much smaller, Manaus surprised me. I had wrongly had a vision of an underdeveloped South America city. Instead this was a cosmopolitan city with a busy port, colonial houses and an opulent pink opera house – a sign of its once prosperous era.

From the late 19th century to the early 20th century, Manaus was a major producer of natural rubber, resulting in the creation of the port. Unfortunately its rubber boom was short-lived and the city faced a decline in the 1920s. Nowadays Manaus is a major port and also an attraction for tourists (like me!) who want to experience life along the Amazon river.

If you're wondering what to do in Manaus, this article covers my recommendations.

Things To Do in Manaus 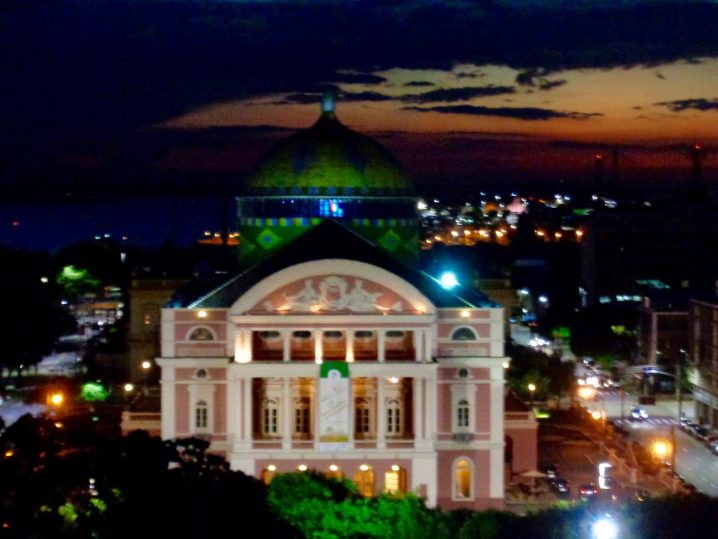 1. Watch an Opera at The Opera House

Wearing my heels in the Amazon did seem like a strange concept but I couldn’t miss the chance to watch an opera in Brazil. The ticket cost $2 (so cheap!) and we got to sit in the God seats and have our own private booth. Although I didn’t understand Portuguese, I did understand the musical theme, and listened to the sounds of famous computer games such as Sonic the Hedgehog and Super Mario being played by a classical orchestra.

It was a completely different experience to that of the Opera I had watched in the Sydney Opera House but this was the Amazon! Even just sitting within the opulent interior of the building was an experience in itself. We queued and bought our tickets from the ticket booth before the performance on the night. 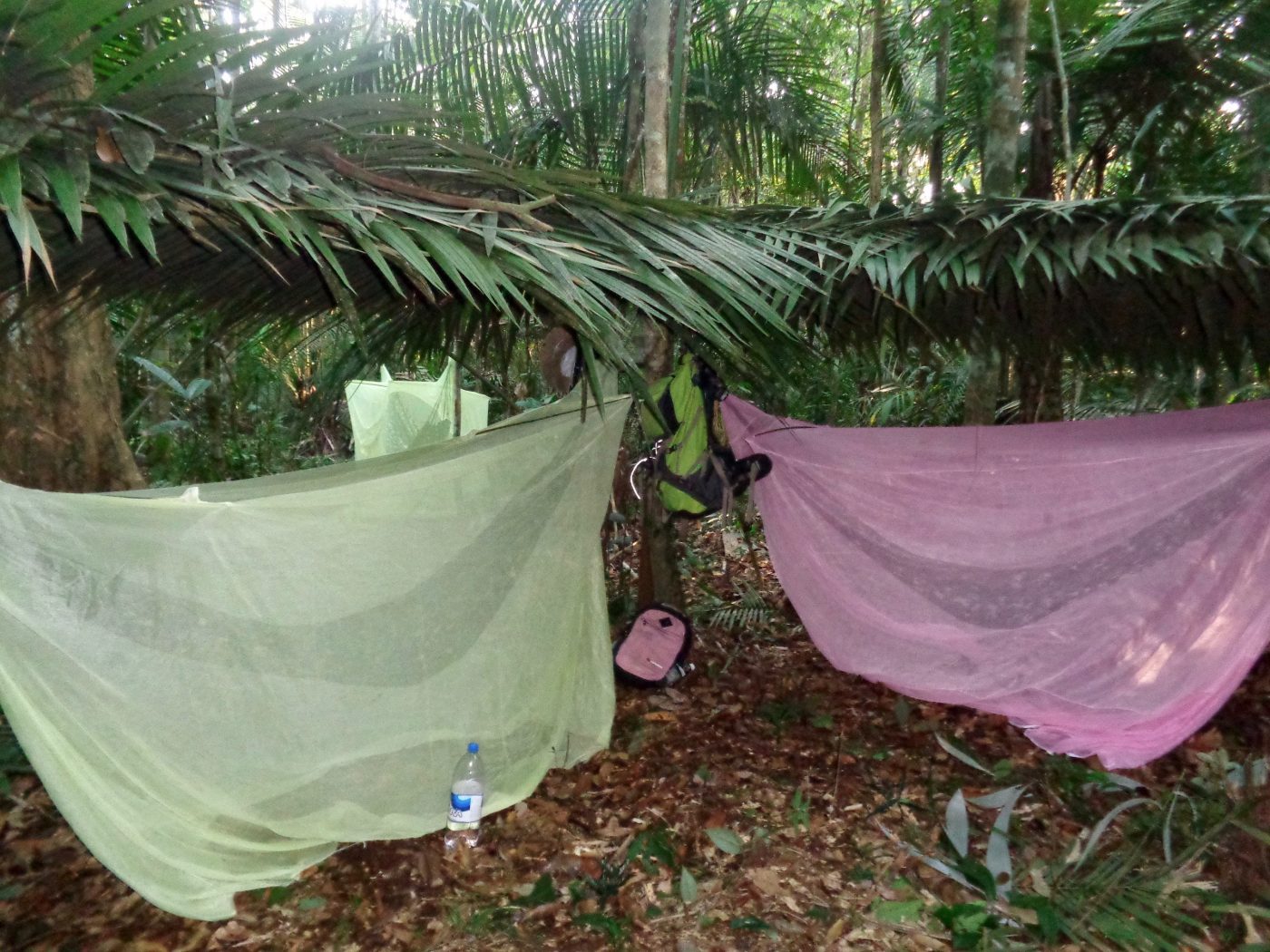 Around the square are travel agents all selling the same tours, promising sightings of pink Amazon dolphins, indigenous tribes and piranhas. I booked a tour through Amazon Jungle Tours, one of the un-touristy companies and spent 5 days on an Amazon survival trip, sleeping in a hammock, eating bugs and drinking saps from trees (as well as eating noodles and wild boar), and learning about medicinal plants.

There are also shorter tours where you can fish for piranhas and sleep in a guest house along the Amazon instead if you don’t fancy roughing it. Read about my Amazon adventure here. 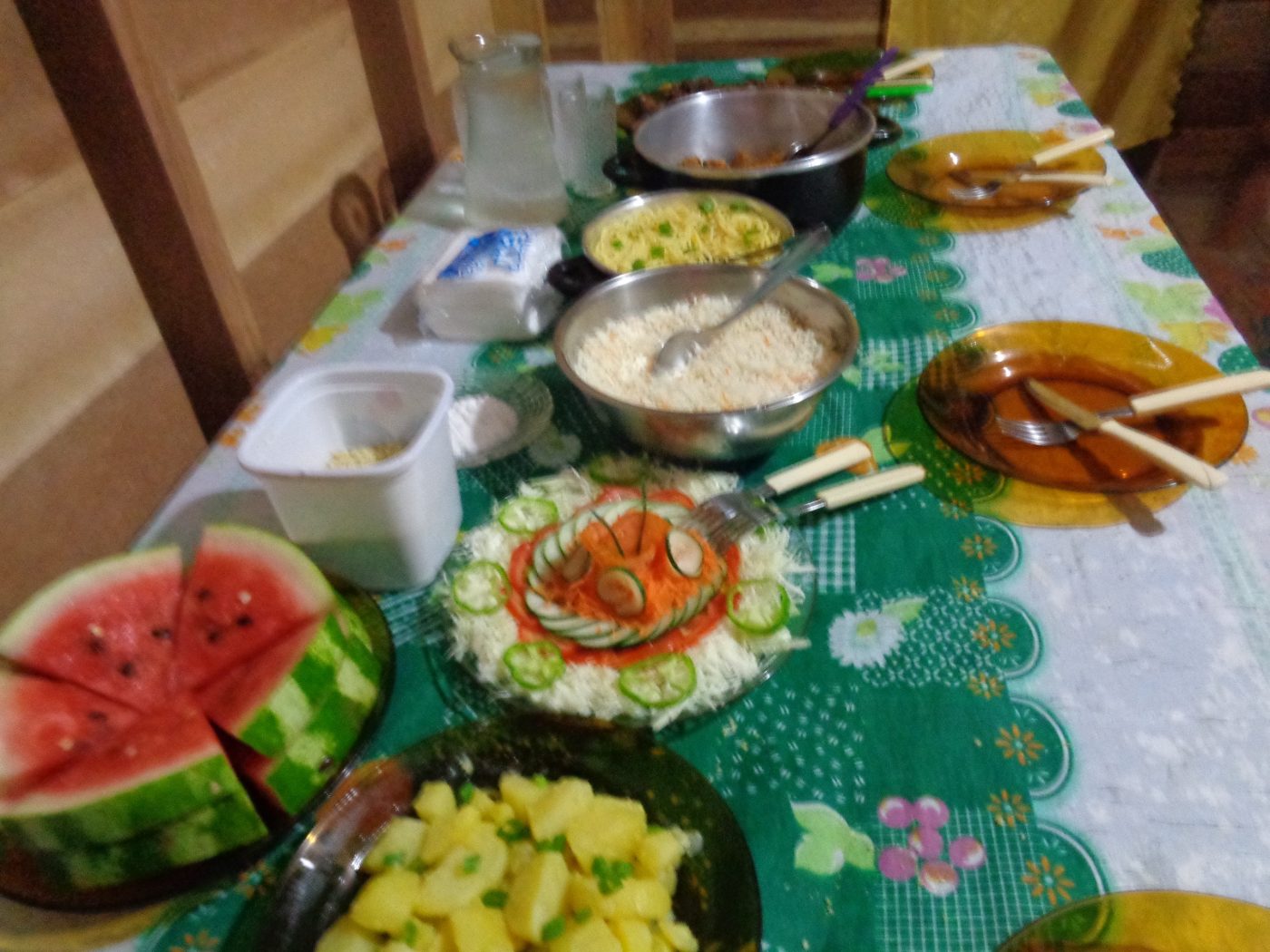 Being next to the Amazon means that fish is plentiful. Restaurants selling the local fish were full with what seemed to be locals and tourists, especially in the vicinity of the Opera House. If you love fish then you’ll love trying the scary Amazonian fish that Manaus serves up. Try the tambaqui, the fruit eating fish from the Amazon.

Don’t forget to try the Brazilian cocktail either called the caipirinha (if you like mojitos then this one’s for you). There’s also a great juice bar where you can get any fruit and sit at the bar and drink the Amazon goodness. Try the acai, a purple smoothie which is fab! 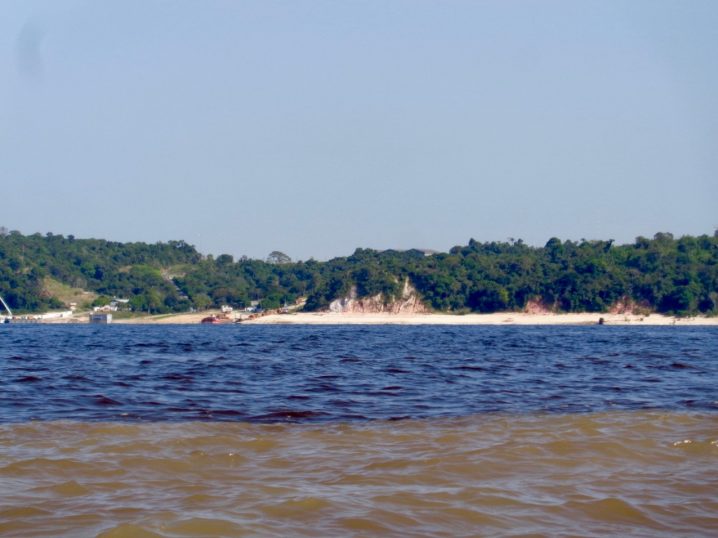 One of the most popular activities in Manaus is taking a boat trip on the Amazon. If you don’t have much time or just prefer to see the mighty Amazon River, you can just take an Amazon River tour for the day to see the river. The Meeting of the Waters is the point where the Rio Negro meets the Amazon River, slicing the water between a tan brown and black.

Each river has its own density and speed, and the difference in colour is definitely worth seeing. Plus you get to ride on the Amazon and you may even see one of the Victoria Amazonica water lilies, the giant lilies that are found here. 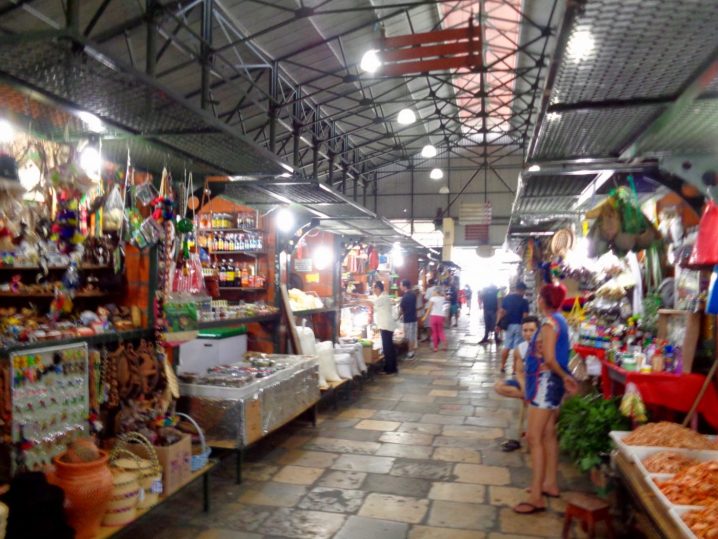 As well as a good place to avoid that awkward dining alone experience (you can just sit on a table, order some quick food then go), the Adolpho Lisboa Municipal Market is a good place to find handmade crafts. The open market nearby is just as good, selling everything that you expect to find in a market including a floppy Amazon hat. 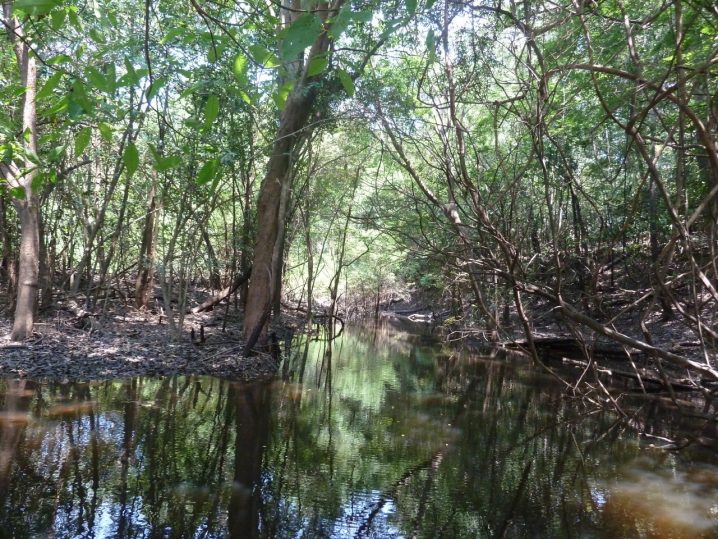 Although it is 20 minutes out of the city by bus, the Instituto Nacional de Pesquisa da Amazonia (known as INPA) is worth the bus ride especially if you don’t get to venture into the Amazon. Inside this museum the Amazon is recreated for you with giant insects and other Amazonian creatures.

This institute helps orphaned animals and you’ll be able to see turtles and manatees within its rainforest habitat. You can also buy handmade crafts made by the natives. It isn’t open every day so check the timetable before you take the bus there. 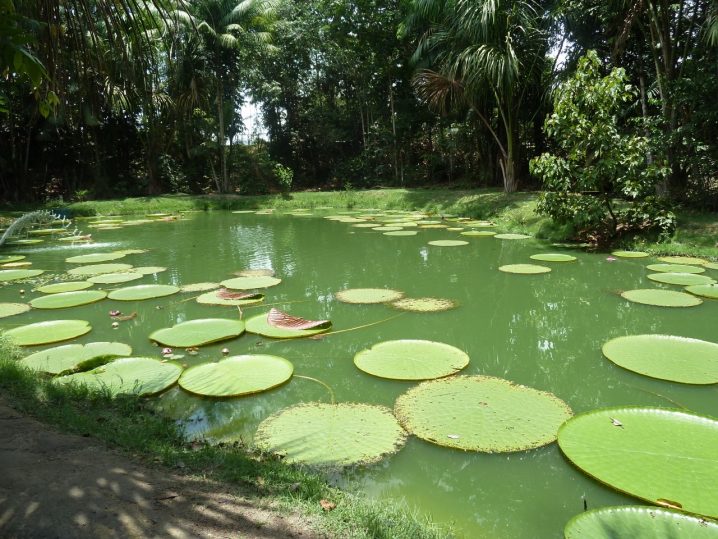 Another alternative to actually venturing into the Amazon jungle for yourself is venturing into the botanical gardens instead. Follow the trails, walk under the tree canopy and climb the tower to see over the forest canopy (which is an extra charge). Take a guided tour to find out more about the native flora and fauna and stories from the Amazon. Find out more…

If you have more time there are waterfalls just 2 hours outside of the city at Presidente Figueiredo which are meant to be beautiful (unfortunately I didn’t get to visit them).

In total we spent 3 weeks in the Brazilian Amazon using Manaus as our base. In hindsight I wouldn’t have stayed this long. Most people just pass through Manaus and stay for a week maximum.

Did I find love again? Spending 5 nights together sleeping rough in the Amazon is enough to test any relationship. For me, it was back to being solo… 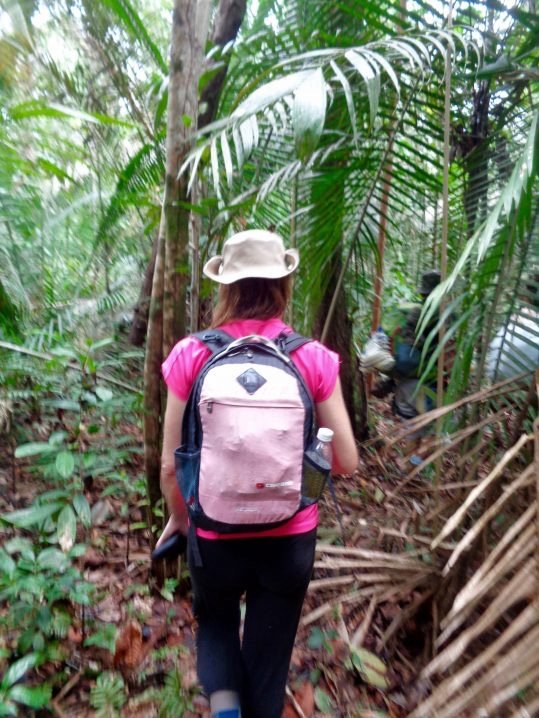 Where to stay in Manaus

I stayed at Tajmahal Continental Hotel in Manaus. At the time (September 2016) it had new management and a special discount of $25 per room per night. It was 5 minutes walk to the beautiful pink Opera House and included an amazing slap-up breakfast.

I did venture into the Local Hostel Manuas to do some laundry. It’s in a really central location near the tour companies and the opera house and square. It had a large communal area and the man on reception was really friendly and spoke great English. They have female only dorms and prices start from £10 a night for a bed in an 8-bed dorm.

I initially stayed in a guest house which was a 15 minute bus ride away so I would advise staying in the centre if you’re solo.

Is Manaus good for solos? I was here as a couple. I would say that it is more for the adventurous solo. It does take a bit of working out to get around although the buses are good. If you stay in a hostel you can meet others but other than that it would be difficult to find company.