If you are planning to visit Mexico between mid-May to September you have to experience snorkelling with whale sharks in Cancun. It's a once-in-a-lifetime experience.

They’re friendly, they travel in a large group and they descend upon Cancun annually. No it’s not the American college students who party in Mexico during spring break (just joking), it’s the school of whale sharks that migrate to Mexico from mid May to September each year.

And I had the privilege of swimming with them. Whale sharks are the largest sharks in the ocean and can get as big as 65 feet long, weighing three times heavier than the Great White shark but luckily they have tiny teeth, are vegetarian and feed from plankton in the sea.

A few weeks ago snorkelling with whale sharks was not something that I would not have even contemplated but after swimming with nurse sharks, rays and turtles in Belize, I was now ready to face these giant fish. 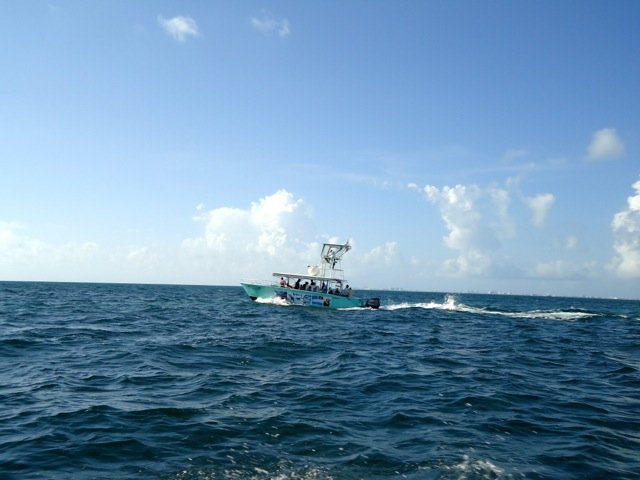 As we drew closer, the fins in the ocean became apparent. These sharks were big!

At this point, I was feeling seasick from the rocking and the sight of two of the other snorkelers being ill over the side of the boat was making me feel worse. It got so bad that they had to be put on another boat and taken to shore. Apparently, they had had too much tequila the night before and were feeling a little tender! 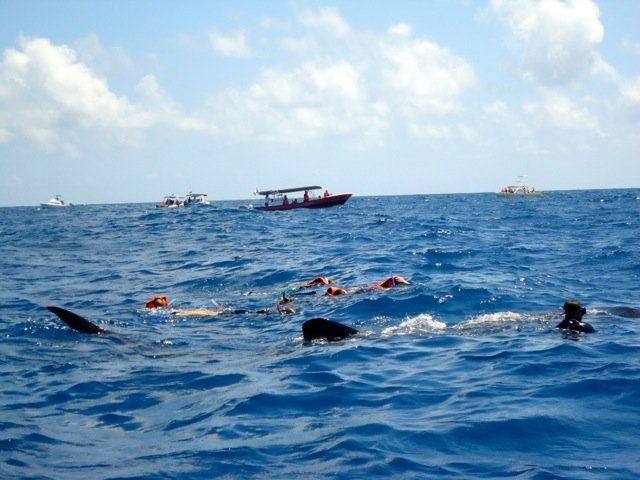 As soon as the boat docked, I couldn’t wait to jump in the water with these placid giants, who didn’t seem perturbed by the humans swimming alongside.

In our group we swam towards them, fighting each wave until the guide suddenly yelled.

As I did, I saw a four-foot mouth heading straight towards me, opening and closing like a vice. My head came up quicker than you could say ‘shark' and I removed my snorkel and screamed. 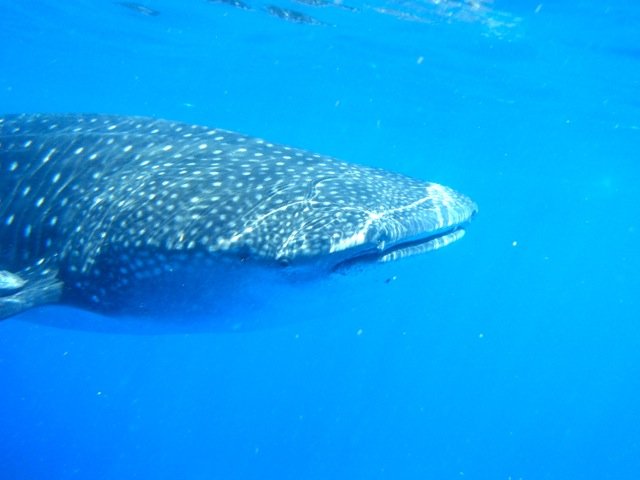 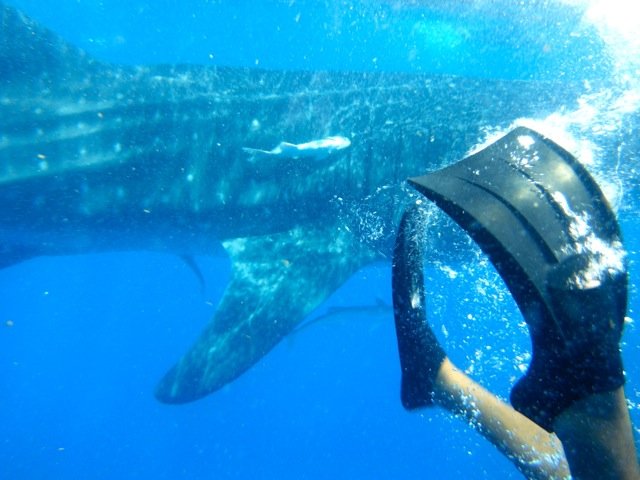 ‘Are you okay?' yelled the captain on the boat, concerned.

By this time I had grabbed hold of the back of the guide and was using him as my shield to get out of the shark's path.

‘Yes,‘ I laughed, bobbing up and down. It had taken me completely by surprise but I was ready for the next one.

Snorkelling in pairs you stay close to the guide and take it in turns to swim. When you're in the boat waiting your turn, you are just surrounded by dark fins and the bobbing heads of the snorkelers, all trying to get as close as possible (except me of course).

Whale sharks weren't the only visitors to these waters, small fish circled around and manta rays gracefully glided under the sea. Watch this amazing footage of a manta ray taken by my snorkelling buddy: Jon Breeds.

As we rocked from side to side, I was eager to get off the stationary boat and jumped in for my last swim with the sharks. Having my head underwater in a snorkel seemed to be the only cure for my sea sickness but as I came up for the last time, so did my last drink, just missing the tail of a whale shark as it swam close to the boat! 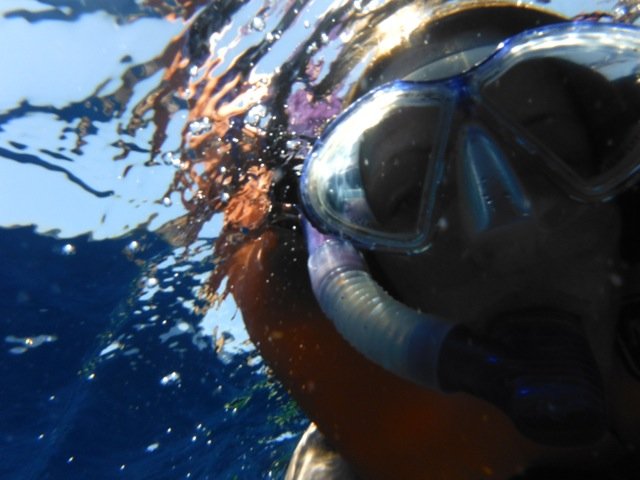 taking shelter in the sea

Thankfully, it was only a matter of minutes before we were on the move and waved goodbye to the whale sharks. Then it was a leisurely stop at Isla Mujeres, a gorgeous Mexican island for Ceviche – a popular seafood lunch and a well-deserved local beer, all sampled in the warm CALM waters of the Caribbean Sea…

What an amazing experience! 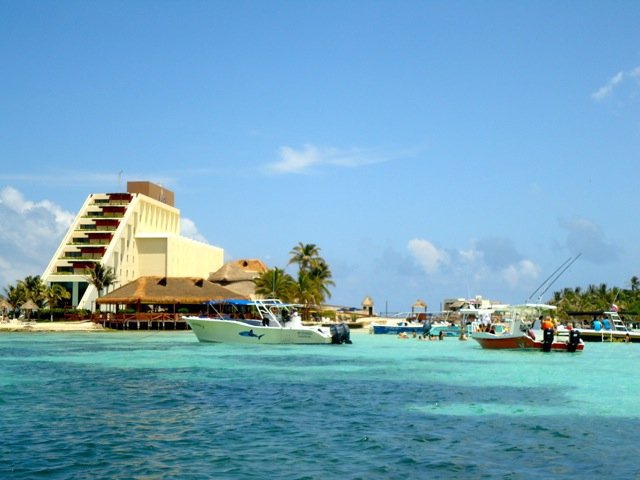 The gorgeous island of Isla Mujeres 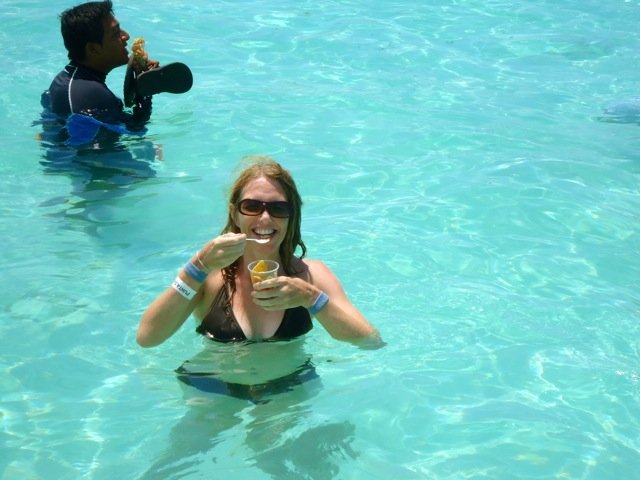 Lunch in the sea!

To experience snorkelling with whale sharks is not cheap and will set you back approx £150 for a full-day trip. You can depart from Cancun, Playa del Carmen, or Tulum, and once you get past Isla Mujeres, the sea can be choppy. Take sea sickness prevention tablets if you suffer like me. Please note that you are NOT allowed to touch the sharks. 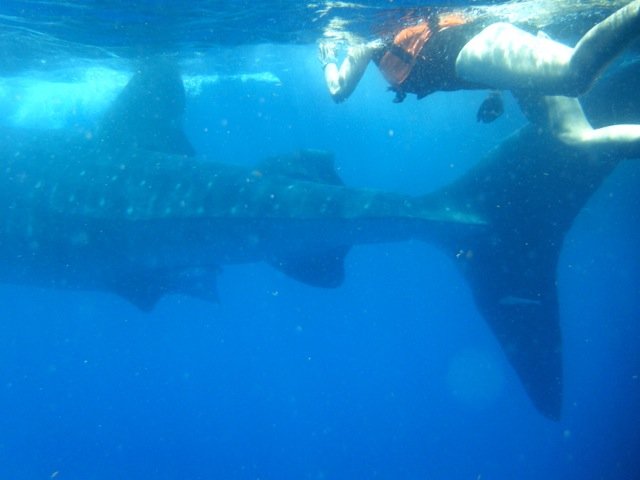 2 thoughts on “Snorkeling with Whale Sharks in Cancun”