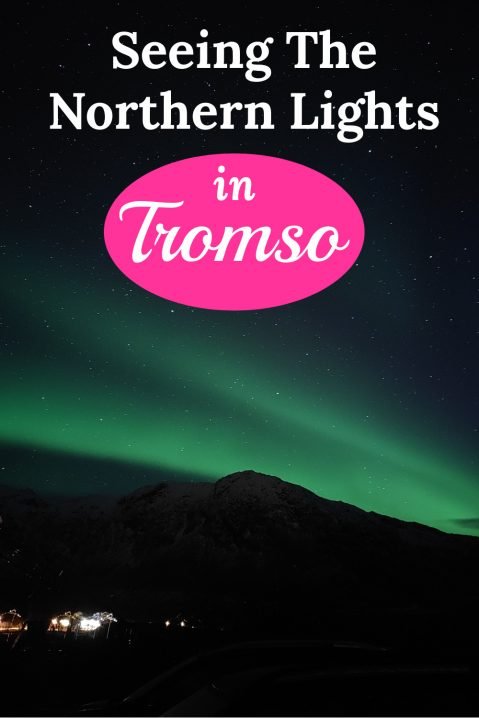 “They’re coming!” said Jonathan, the owner of the hostel, excitedly, as the first wisps of white air streamed across the air, looking like a white rainbow without the colours and hovering over us like an angel archway.

The night sky was dancing with stars, glistening and twinkling in the Arctic sky. I felt as though I had been transported to another reality, one where I was at completely at peace with nature. Where I was made to remember that I was just a mere, tiny speck in the universe.

The frostiness of the night wasn’t dampening my excitement as I stood by the lit bonfire, and warmed up my feet in my new snow boots that I had bought for the occasion. 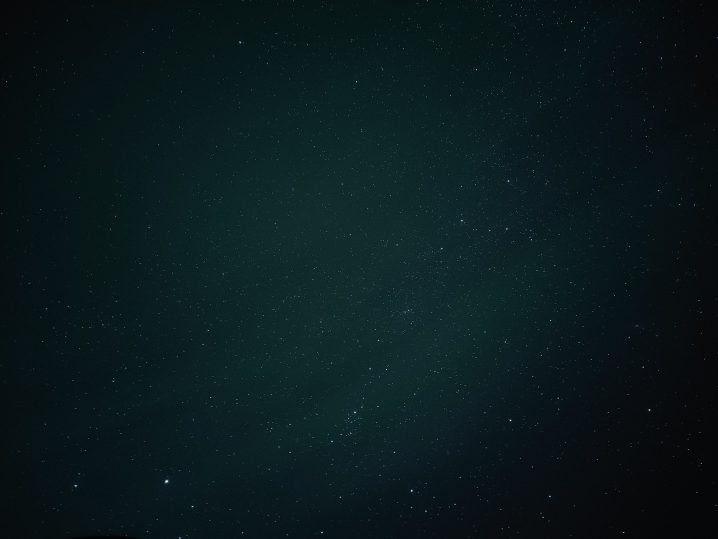 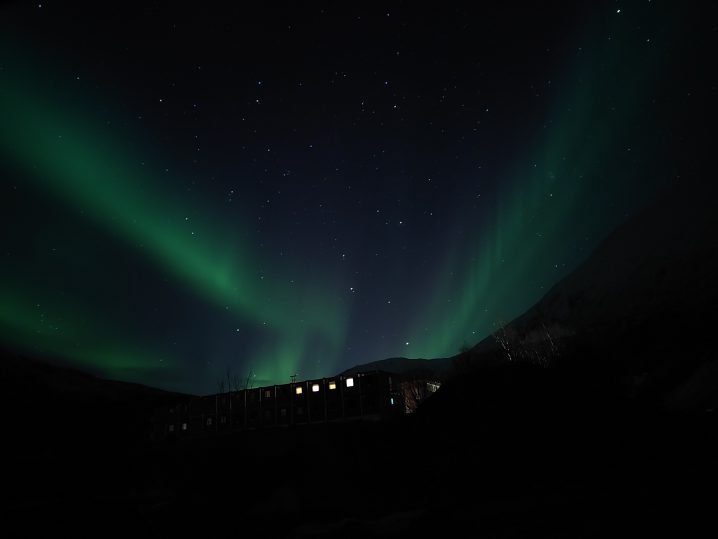 This was the final night of my five nights in the Arctic Circle, and apparently this was the best visibility for the Northern Lights, nature’s very own illuminated light show that promised me a front row ticket.

By this wasn’t my only night looking for them. Staying at MelisHome Aurora Observatory by a fjord in a snowy wildness with hardly any light pollution, was the best spot for me to wait for this natural phenomenon. An experience that had been on my travel wish list for as long as I could remember.

Like an excited puppy on the first night, with my ginger beer in hand, myself and six other nationalities waited patiently for the lights until the wee hours of the morning, only to be rewarded with a cloudy sky and very tired guests. 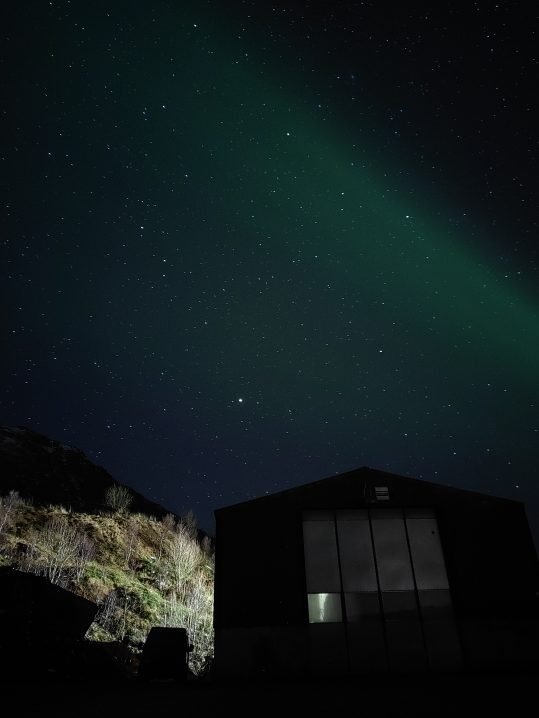 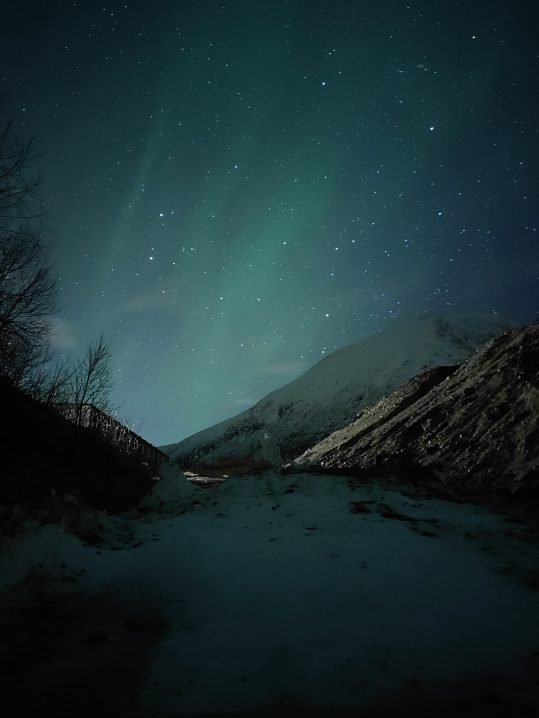 Hearing that a solar flare from the sun had been sent through the sky, we knew that the lights that were coming would be spectacular. The only thing we forgot to find out was that it can take days before they reach the Earth.

On day two, I had sat in my room with the lights off, staring at the sky, then dozing off and waking up with a quick twitch to the curtains to see if I had missed anything. 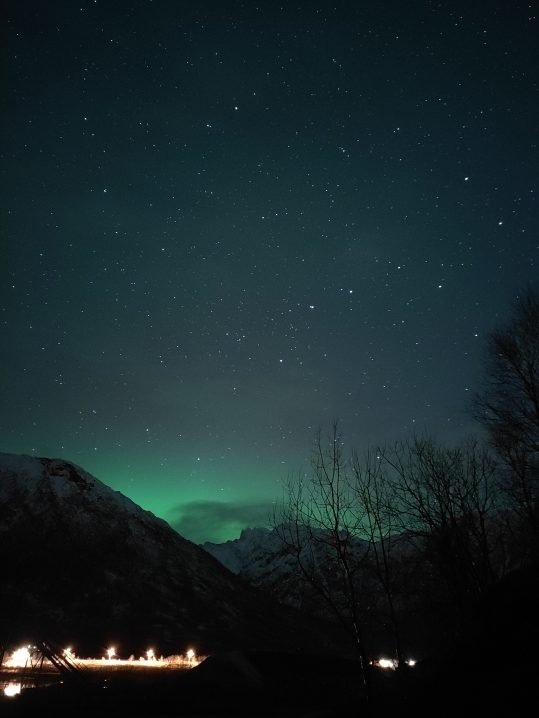 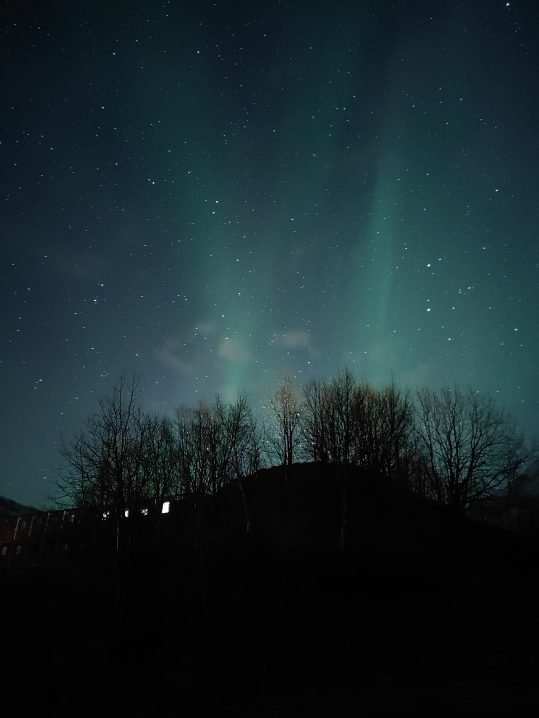 By day three I had given up. The sky was too cloudy to be able to see anything so I left the Aurora Observatory and checked into a hotel in Tromso city instead. Getting ready for my reindeer feeding excursion. That night, after hours of darkness already (I was in the Arctic Circle), I walked around the city, looking like a mad woman staring up at the sky with every step.

Hours before I was stood in front of the bonfire, I received a text. “Tonight is going to be amazing” he said. “I’ll come and pick you up.”

So here I was, standing with a group of students from France, Russia and India, and a lady from Japan, waiting for the Northern Lights. 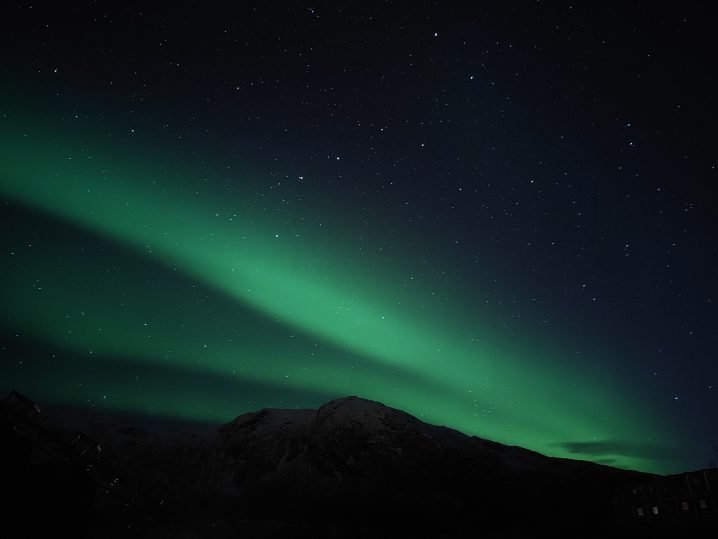 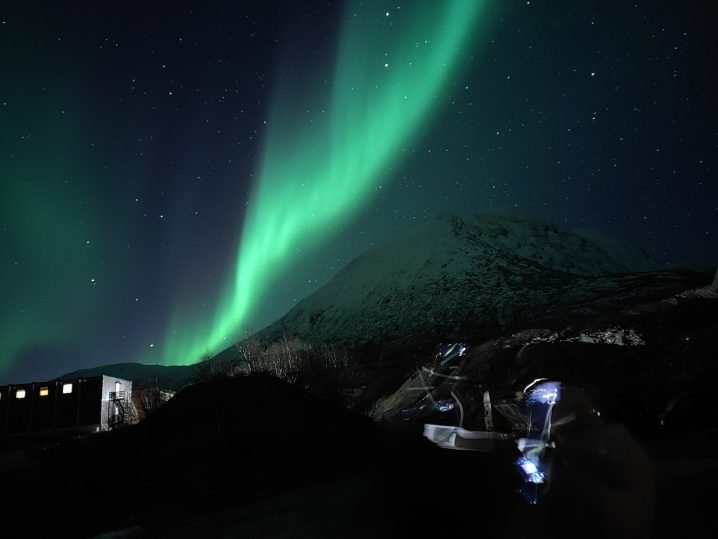 It wasn’t until hours later, that I began to believe it was actually going to happen. As the white light began to turn to a light green, it reminded me of a nightclub beckoning late-night revellers with its bat signal flaring across the sky.

Slowly but surely, other white flashes turned green above me. Green streaks appeared across the sky as I watched hypnotised, wondering from which direction the next ray of light would come from.

The Northern Lights are caused by electrically charged particles travelling through the earth’s magnetic field, driven towards the Poles which creates the ‘wavy’ style movement. The actual lights themselves are caused by gases being expelled into the atmosphere, creating a variety of deep colours.

“It's dancing!” squealed one of the girls. And sure enough, like a lava lamp in the sky, one of the streaks began to move up and down gently as though it was performing just for us. I watched the light display until it began to fade and the night sky gradually returning to its twinkly glory.

I went to bed, tired and cold. I fell straight asleep in my clothes. I awoke an hour later, checked the window, then decided to strip off and go to bed. They weren’t going to come back and I had been so blessed to have seen them once. No sooner had I wrapped myself in the warm duvet and closed my eyes when there was a loud tap on the window. 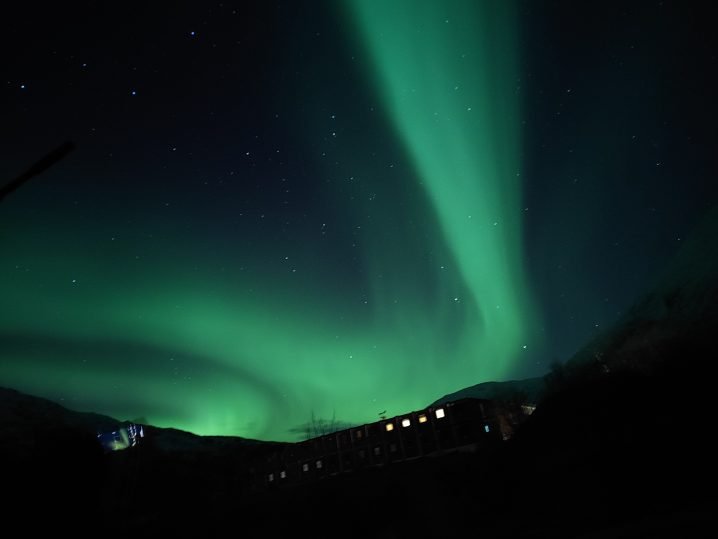 As I peeled back the curtain, I saw them! Green lights flashing through the sky over the mountains. I joined the others outside who had been sat in the sauna and were now huddled in duvets. It was magical and such a different performance to its first showing.

Then at 03:30, I climbed back into bed satisfied. Eight hours after hearing “They are coming,” I had seen the Northern Lights. Twice! And three shooting stars. After four nights of waiting, I had finally experienced a true Arctic Circle adventure.

Have you ever seen the Northern Lights? I would love to hear your comments below. 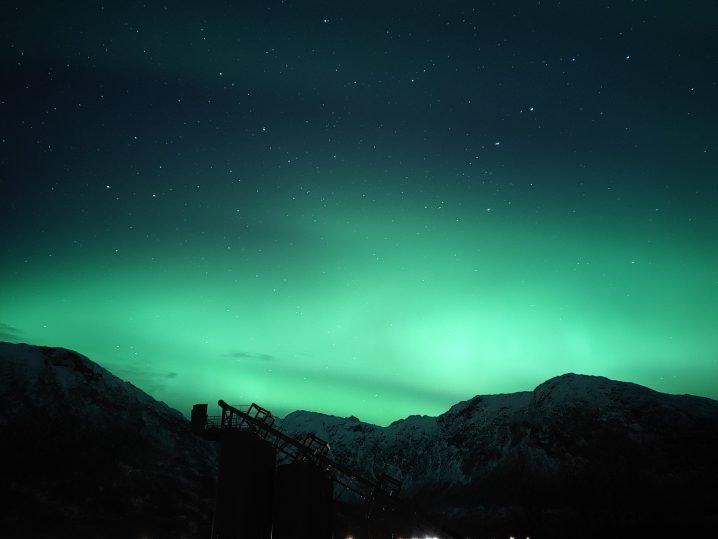 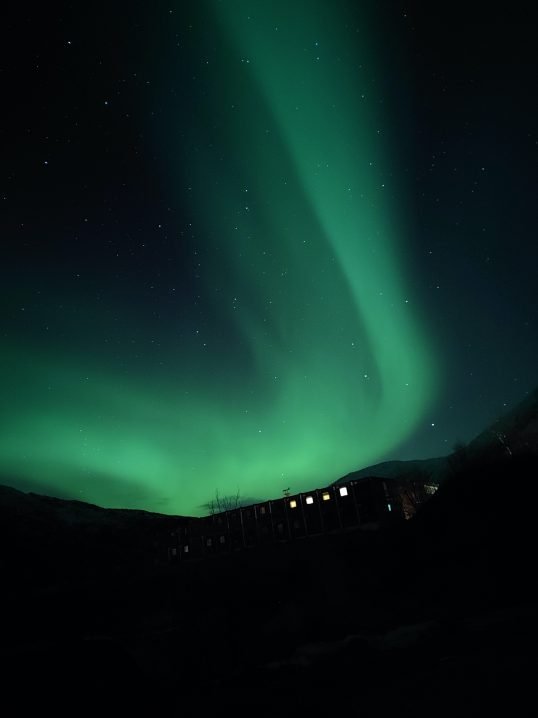 About My Northern Lights Experience

My experience of seeing the Northern Lights in Tromso was so amazing! As I only have an iPhone the Lights don't seem to come out as well as from a camera. One of the other guests, Anastasia, allowed me to use her amazing shots for this post.

There are many tours that you can choose to do to chase the Northern Lights which include transportation, warm clothes, hot chocolates and even marshmallows as you drive around finding the right spot to see them. Tours usually take 6 hours so be prepared for a very late night.

I stayed at MelisHome Aurora Observatory which was such an ideal place to see them. It is next to a fjord with mountains in the backdrop. I absolutely loved this place and paid £25 for a private room. If you have time, I suggest staying here but if you really want to see the lights, you do need to be lucky to witness them so it may be worth taking one of the tours to find the perfect spot to see this amazing natural phenomena. 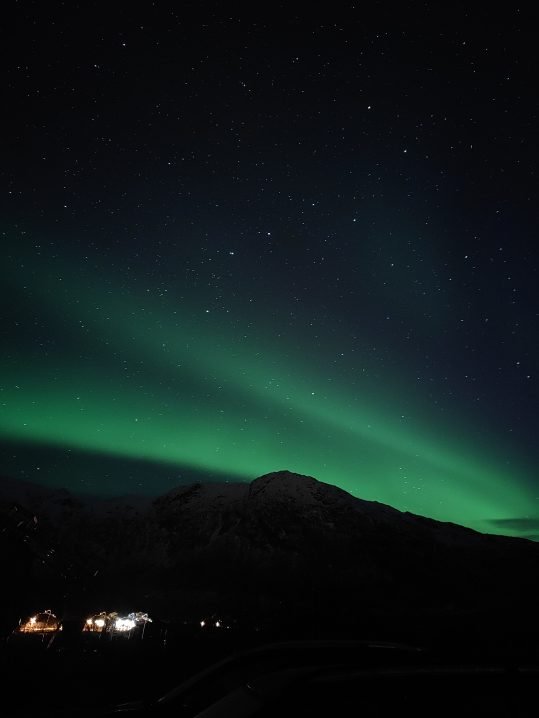