I am still so shocked and wanted to write this post as a tribute to Anita, in the hope that it may help someone else who is struggling. Remembering Anita Mac…

It is at this time of the year when I realise how lucky I am. Christmas is a time for families and friends and I know that no matter where I go in the world, I always have my family to come back to. But some aren't that blessed.

You meet so many people in your life and some of them just pass you by whilst others leave an impact on you. It is only this year that I have found others who are just like me; found my tribe and met like-minded souls with the same thirst for travel.

But one of them still haunts me.

I live my life with no regrets, knowing that every step I have taken has made me into what I am today but as this year is drawing to a close, I can't stop wishing that I had been able to help a like-minded soul, a fellow traveller with so much to live for. 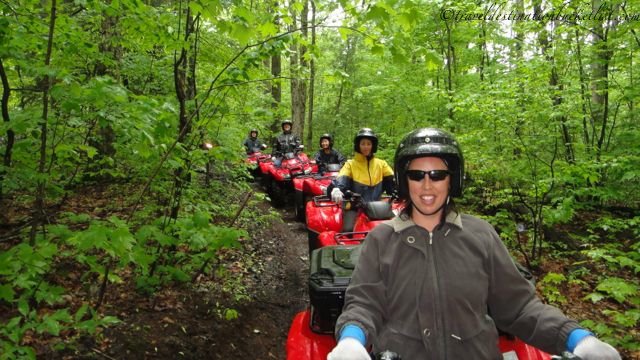 Our time in the Canadian Wilderness

I met Anita at the TBEX conference in Canada in June. We had signed up for a three day adventure in the Canadian Wilderness and I wasn't sure what I was letting myself in for. Anita loved to be outdoors and had even brought her own bike helmet complete with cycling shorts. She immediately struck me as an outgoing girl; a few years my elder, she oozed a lust for life that I admired. Whatever activity we were about to do, she was up for the challenge but the water was where she thrived.

We spent three days and nights together in our group of five. As I was the newest blogger, she happily gave me encouragement and advice about making it in the blogging community. There was a chance that we could all be invited back to sample Ontario in the winter and Anita was thrilled. The reunion of the five of us promised to be even more fun (if not a tad colder) than we had already experienced. She was happy, carefree and at the time, full of life.

Less than three months later, Anita took her own life.

I look back at that time that we spent in a group and I wish I had seen something, just a flicker of a sign that something wasn't right. I was trained in dealing with suicide. I spoke to people every week who had suicidal thoughts and just didn't want to go on but I didn't see it with Anita. I knew the signs, the withdrawal then the happiness with the certainty of knowing what they were going to do. My role as a samaritan had opened my eyes to the taboo subject…but I hadn't been able to help Anita.

For her, it seemed the pain of losing everyone around her was just too much.

Ten days before she wrote her last ever post, I tweeted her to tell her she was on my favourite bloggers list. She replied. I wish now that I had read her post at the time; a dark honest account of her heart breaking with the news of her terminal father and the breakdown of her relationship. I wish I could have done something but sometimes people do things that seem so incomprehensible to us which at the time may have been the only option to them.

Her words from that post still haunt me: “I have written about solo travel – but what about solo life? Everyone is gone.”

Life can be so cruel and I cannot begin to imagine the pain that Anita was going through. All I know is that you have to be true to yourself and do what ignites the fire in your belly to live life every day. For Anita, her passion was to travel and inspire others and she left behind the corporate world to pursue her dreams. For this I will always admire her.

Her death is a dark reminder that travel isn’t this utopia lifestyle. It comes with its own challenges and sacrifices of relationships, stepping out of society to succumb to our never ending wanderlust. Solo travel doesn't have to mean a solo life but it has to take a very special person to understand the life you have chosen. I wish I could have told Anita that. I wish I could have told her to hold on until the tidal wave of emotions would gradually pass.

But I can't. All I can do now is remember her smiling face in Canada and be so thankful that our paths once crossed. I just pray that she is now in peace.

Life can be hard and we need a support system to carry us through in times of despair, so please don’t pretend that everything is okay when it’s not. This time of year can be so lonely so please reach out to someone and talk, even if you don’t know where to begin. Thank you x