My time in Romania had come to an end and I was about to travel to Belgrade; the capital of Serbia. After a few days of touring the country and getting lost in Castle Dracula I was at the train station armed with my train ticket, courtesy of my tour guide and was ready for the next big adventure.

One important rule when travelling is never to presume anything so when I spotted one other traveller on the same platform, I had pounced on him (not literally) to check if it was the right train. Turns out that Dave from Australia also wasn't so sure.

‘It says Romania on the front so it can’t be,’ we both agreed.

So we waited and talked. Dave exhausted from his train from Bucharest and myself sprightly from my night at the Freeborn Hostel in Timisoara. The time passed and before we knew it there were only ten minutes before our train departed but there were no other trains at the station. Still convinced that it wasn’t our train (it did say Romania and we were going to Serbia) we both reminded each other that the train to Serbia would be here soon. 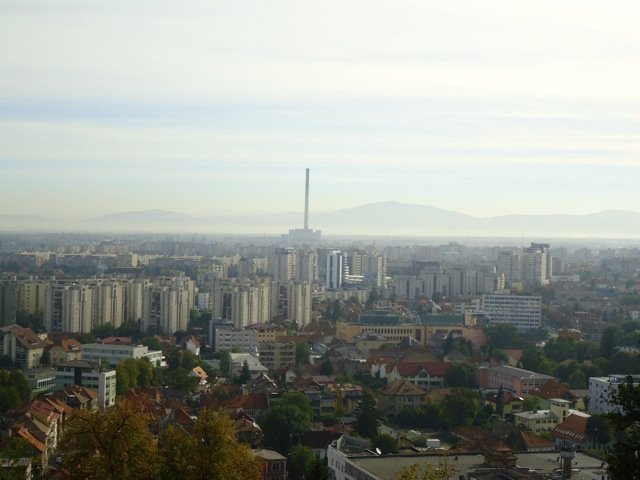 There’s always an anxious feeling when you know that there’s only one train a day and that if you miss it, your travel plans are quite obviously screwed. As the clock ticked I checked and re-checked my train ticket and that's when it dawned on me that I wasn’t going to Belgrade.

‘What does your ticket say?’ I asked my new Aussie friend.

‘Belgrade,’ he clarified, leaving me even more confused.

‘Where’s this place then?’ I asked, pointing to the word ‘Vsrac.' He confirmed it was across the border where we needed to change trains to get to the Serbian capital.

‘You’ll be able to buy another ticket to Belgrade from there,’ he said.

It was now only five minutes until our departed time and there was still no sign of our train. I searched along the platform for someone wearing any kind of train uniform to no avail. There was only one other man looking as though he was going to board the train; the train that we had been staring at for the last thirty minutes.

Sometimes when you travel, your instinct just kicks in and you find yourself saying or doing things before you even have a chance to think about them.

‘It’s this one!’ I exclaimed as the large clock on the platform ticked, indicating there was only one minute to go.

‘Are you sure? It says Romania?’

I ran up to the man about to get on and tapped his shoulder frantically. I could tell he was Romanian but surely he’d understand the word I was about to say?

‘Serbia?’ I asked loudly and pointed at the train.

My adrenaline was flowing as I nodded back frantically.

‘Get on!’ I yelled to Dave who was running down the platform with all his bags and his long flowing fur coat that he just brought to keep him warm.

We jumped on with all our bags as the sound of a whistle echoed along the platform, before the chugging of the engine began and we were off, heading in the opposite direction to Romania. Apparently the train had come into Romania and was now heading backwards into Serbia. If we had gone to the other end of the train, we would have probably seen the sign for ‘Serbia.’

A word of warning – if you’re going to ask locals for the correct train, make sure you always get a second opinion and ask more than one. The first person might not understand and just nod anyway.

But there was still a way to go before we got to Serbia. 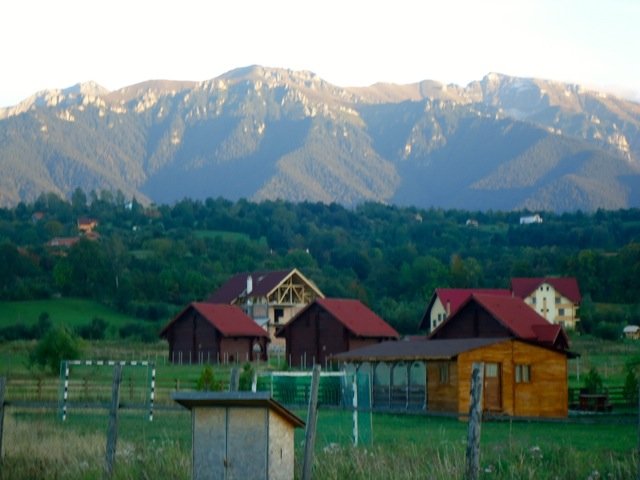 Relieved we were sitting on the right train, Dave slept as I counted my money. I had just enough Romanian Leu left and a credit and debit card to buy my next ticket. I settled in and slept.

Arriving in Vrsac there was an hour's wait for our next train to Serbia. The railway station looked like something out of an old movie and Dave and I were still the only travellers there. There was nothing around except for a supermarket that I was told was a ten minute walk up the street. I went to the counter to purchase my onward ticket as Dave guarded my bags.

‘No,’ I was told as I handed over my Romanian currency.

She shook her head.

‘Card?’ I asked, prising it out of my purse as my plan B.

She shook her head again.

‘Change money?’ I said, thinking that I could change my Leu into the Serbian currency and pay that way.

‘Supermarket,’ she said and pointed down the road.

I left Dave and ran down the road in the pouring rain. I had no idea if I was going in the right direction and was in some strange residential area but at the end of the road was a huge store that resembled a western supermarket. Thankful to see the sign for the ‘money exchange’ I handed over my Leu.

‘No change Leu?’ I asked

But this was plan C. I had no plan D.

Panicking and still needing breakfast I went into the supermarket and stocked up on snacks thinking that there would be a minimum purchase amount on a credit card, then hoping that they had actually had the technology to take credit cards!

Thankfully they did and armed with a carrier bag full of every single thing edible from the shop, I ran back to Dave.

‘What are you going to do?’ he asked when I explained my situation.

I honestly didn’t know; I had to get that train but I had no money and no ticket. All I knew was that I didn’t want to be stranded by myself in this odd little Serbian town.

So when the train came, I got on. Me with no ticket and Dave falling sleep again as he settled into the journey. I felt fear. This was Serbia not England; what if they threw you into prison for having no ticket or beat you? I was hoping for a fine, or rather hoping for no ticket inspector (as there had been none on the previous journey). 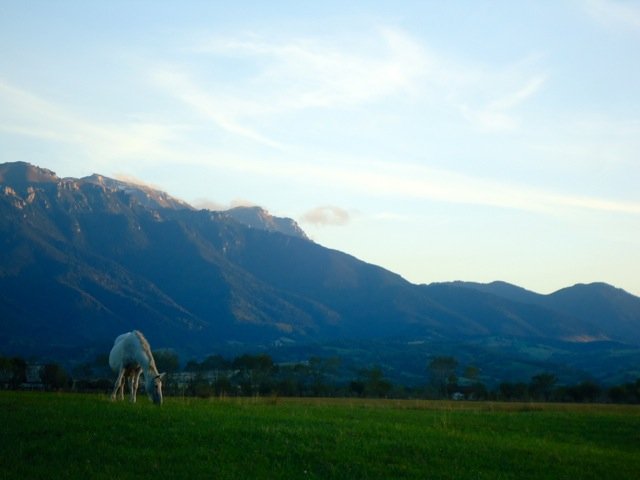 Within five minutes, I saw the door open and a man in a uniform came wandering into the carriage. I nudged Dave to wake him up, panic stricken of what was going to happen to me.

My instinct then kicked in again. ‘How many Euros have you got?’ I asked Dave.

He threw his coins on the ledge and began to count as the inspector got closer.

‘Four.’ Between us we had €6. Surely that would be enough for an hour’s journey?

Dave showed his first and the inspector handed it back. I tried to gain my composure as I handed my ticket from the previous journey, about to play dumb.

I looked at my ticket as if it was the first time I had seen it. ‘Oh!’ I exclaimed.

‘No Belgrade,’ he said sternly. ‘Billet Belgrade?’ he repeated.

‘I don’t have one,’ I replied honestly then opened my purse.

He called over the younger inspector who was in the same carriage to talk to me in English.

‘You need a ticket to Belgrade,’ he also said sternly. I protested that I thought the ticket I had originally brought (or that my tour guide had brought for me) was for Belgrade. I offered to buy another one and handed over my card.

He laughed at me.

My only chance were the Euros that we had scrambled together. I would have to pay Dave back when we got to Belgrade. As the younger inspector walked off, the original man looked at me.

‘Okay,’ he said, indicating that he would take my Leu off me. As I held up all my notes, he took each one and stuffed them into his pocket.

‘Hey,’ I said loudly, realising that he had taken more than twice the train fare.

‘Problem?’ he asked, looking down at me in his still stern manner. I wasn’t about to argue with a Serbian train guard so I smiled, amused by his audacity and replied:

I had just been well and truly ripped off but I guess that was my fine! 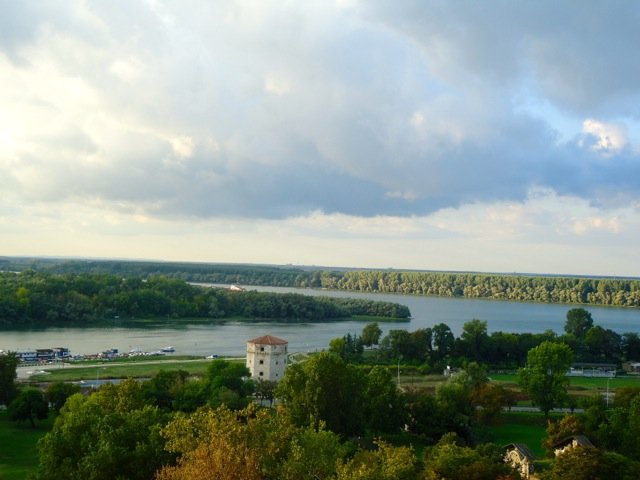 I made it to Serbia!

But the day didn’t stop there. Arriving In Belgrade and searching for the hostel that I had booked which stated it was just two minutes from the train station, we realised after going into a local shop that this wasn’t Belgrade, or the centre of it anyway. That was twenty minutes away and we had to get a bus but there were no ATMs to get any Serbian money! Luckily Dave changed his Euros and lent me the money for the bus fare and then after several wrong turnings, we found the hostel and had to walk six flights of stairs to get into it before we had properly made it to Belgrade!

The moral of the story?

Always carry spare cash with you and never presume you can change money where you are going or that train stations will be modern enough to take credit cards for payment. If you’re travelling in Europe, having spare Euro notes on you are ideal as most countries are in the Euro now and the ones which aren’t may take them as an alternative.

Tip 2  – Make sure you are going into the right train station. If you’re travelling into Serbia from Romania the train doesn’t stop at the main station and you need to take a bus to get into the city.

Tip 3 – Most of the hostels in Serbia are on the top floor with no lifts so wear comfortable shoes and be prepared to walk at least five floors with your backpack.

Apparently the train from Romania to Serbia may be no longer running. You can take a minibus run by GEA Tours for €15.

Have you ever presumed anything that turned out completely wrong?

5 thoughts on “How NOT To Travel From Romania to Serbia”