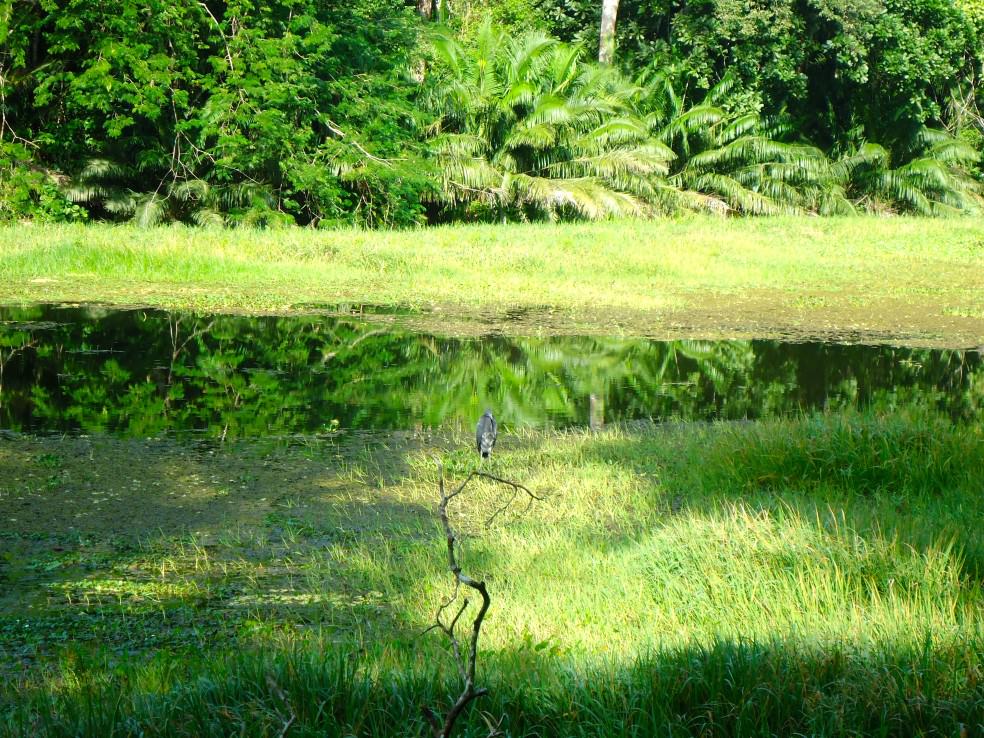 Being in Panama City, in a city full of skyscrapers with modern malls and fancy hotels, you wouldn’t think that the rainforest was just over an hour away, and I was ready to leave the city on a day trip and go exploring.

I had now been in Panama City for a few weeks and had done the usual touristy things: I had marvelled at the engineering feat of the Panama Canal, got lost in ruined buildings at Casco Viejo and spent my mornings running along the promenade starting out at the water, whilst cursing the heat at 7am in the morning.

I felt I had seen as much of Panama City as I had needed to. Apart from visiting more ruins and sightseeing on one of the three islands attached to the city by a causeway, I didn’t know what else there was to do. Until I discovered this…

The Panama Rainforest Discovery Center is an ecotourism project and if you’re a bird lover this place is definitely up your bird-watching street. 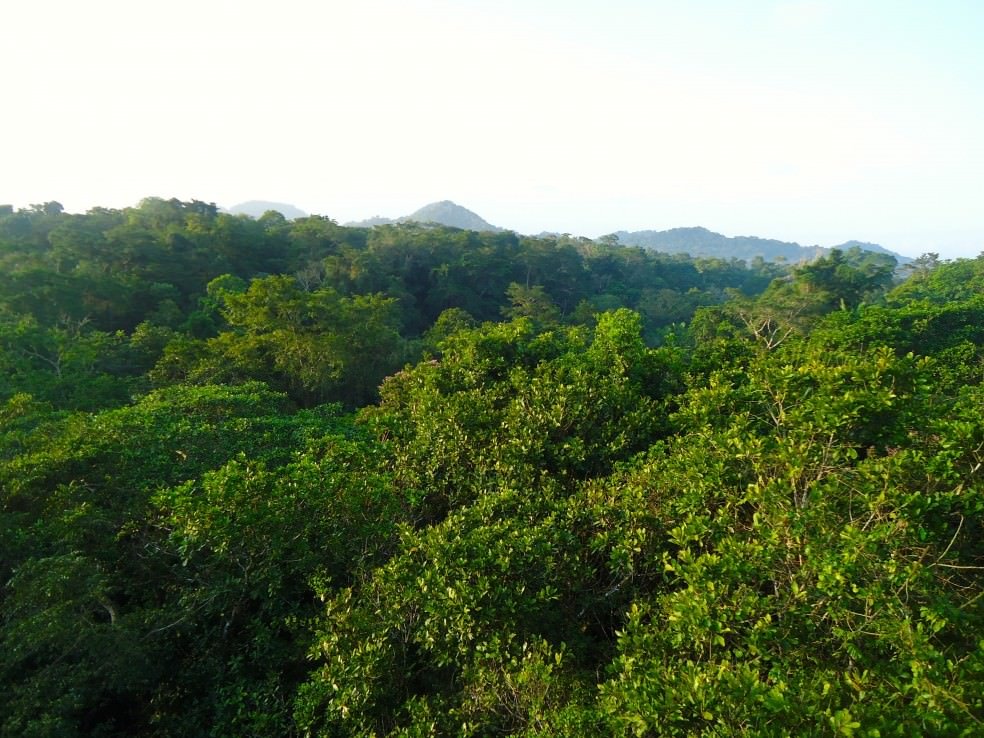 On top of the world.

Leaving at 5.30am in the morning with a Russian and an Indian coming along for the ride, we drove in a 4X4 through the dark, ready to see the sunset over the Panamanian rainforest.

Calling itself one of the most renowned places in the world for bird watching, with 385 species spotted here including plenty of hummingbirds, I was aiming to spot a few, and the hanging feeding bowls in the visitors centre promised lots of them.

Waiting patiently, it didn't take long before I could hear the “vroom” of the hummingbirds as they swooped down. The fluttering of their tiny wings going so fast that I could feel the wind each one was creating as they flew in, dipping their small beaks into the bowls, some in the brightest of colours. 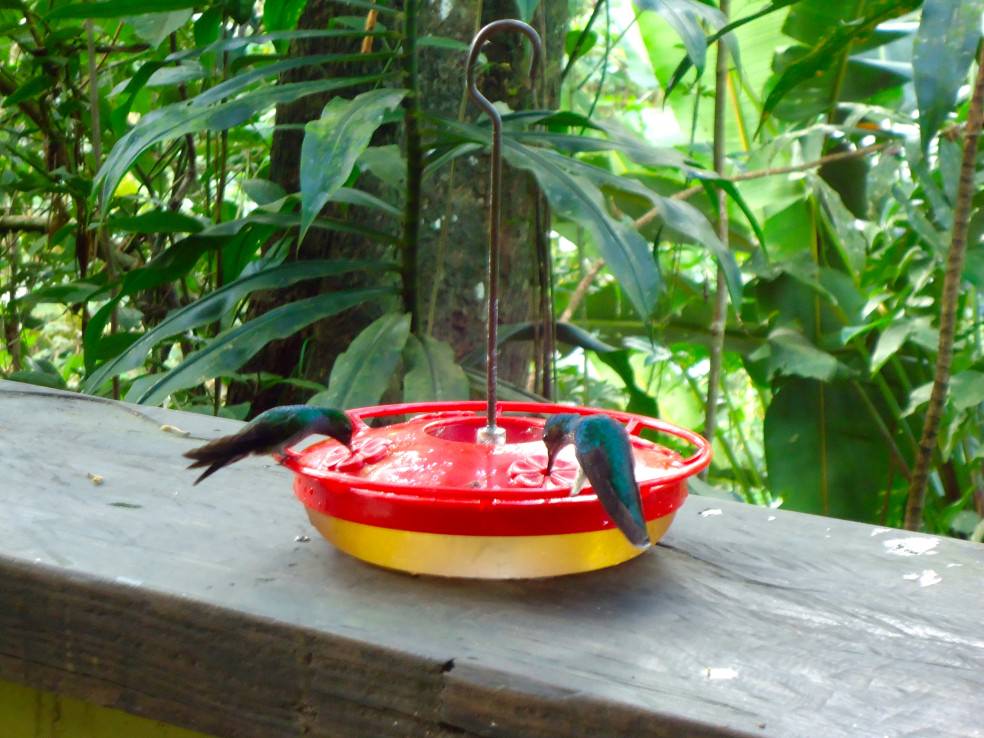 Then it was a short walk through the trails to the 40 metre observational tower that the discovery centre was known for, but it seemed we weren’t the only ones with the same idea. A group of birdwatchers with their giant leader dressed in safari wear (in the middle of a jungle!) had beaten us to it and by the time I had climbed the endless steps, they were all at the top of the tower with their binoculars out in force.

Being so high up, the view just seemed to go on for miles and I stared out over the tops of the trees, breathing in the oxygen of the rainforest, and listening to the excited gasps of the leader as he spotted another exotic specimen. Then, I felt the tower start to shake.

“What is that?” I asked concerned.

Pablo, the manager of the hostel who had kindly driven us, pointed to the giant leader who was walking slowly around the top of the canopy, constantly wiping his sweating brow.

With each step he took, the floor shook, and Pablo grinned back at me. 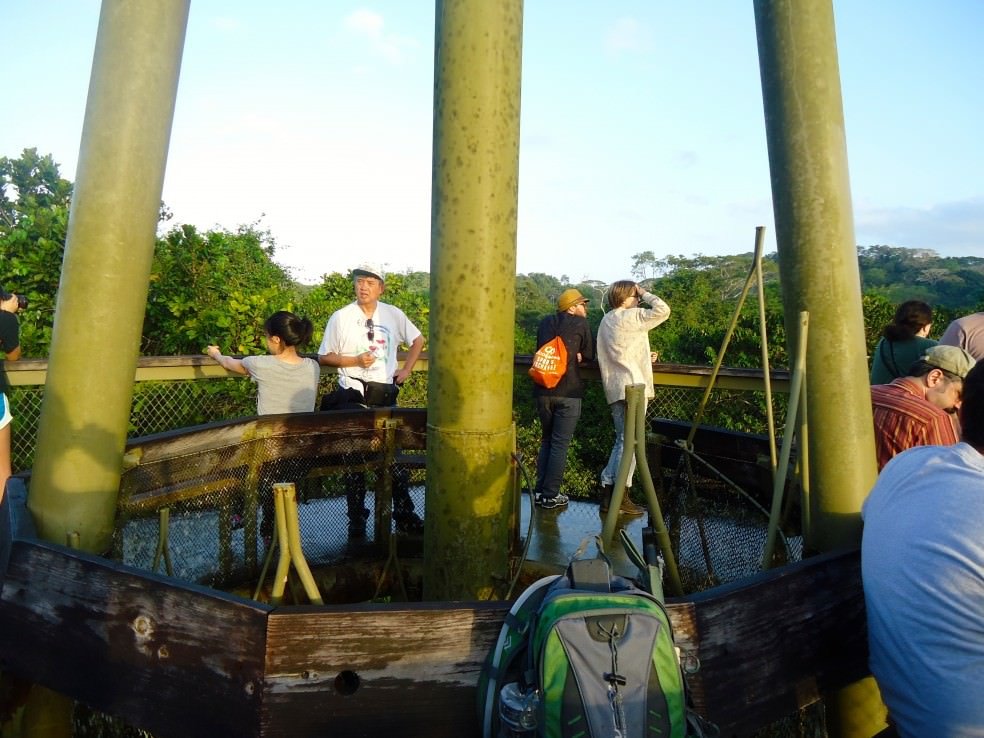 At the top of the wobbly tower

As you climb the tower, you may notice that it sways slightly. Don’t worry, the tower is not going to fall down: the steel structure is counter-balanced by a deep concentrate foundation. The slight movements you feel are a natural characteristic of steel’s flexible nature.

Still feeling a little unnerved and wondering what would happen to the tower when the whole group decided to stand in just one corner, I opted to wait downstairs before exploring the next part of the park.

When the birdwatching group were done, we followed closely through the forest trail, sneaking behind and listening to his wealth of wildlife knowledge along the way. 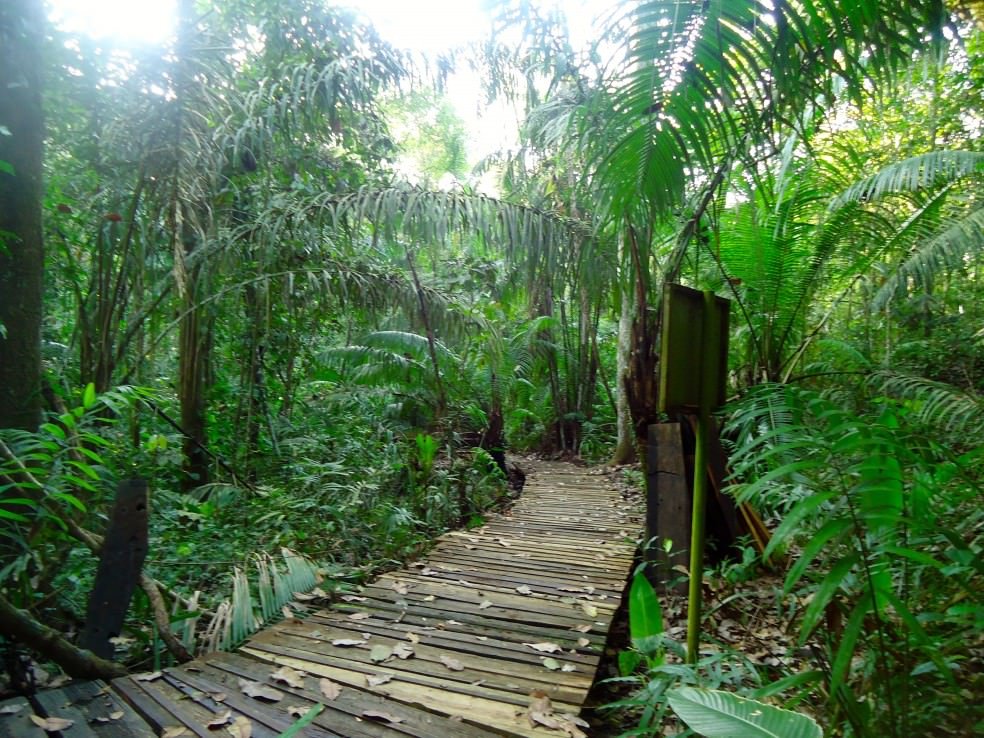 The main trails here lead you to the observation tower and the gorgeous Lake Calamito, of which I have never seen a lake so green.

Spotting a bird (please don’t ask me the name), sat on a tree in the middle of the lake, we sat on the wooden benches, seeing what else we could see. According to the guide, this lake has crocodiles and after my crocodile searching mission in Belize months before, I was scouting the edges of the water to look for any beady eyes. 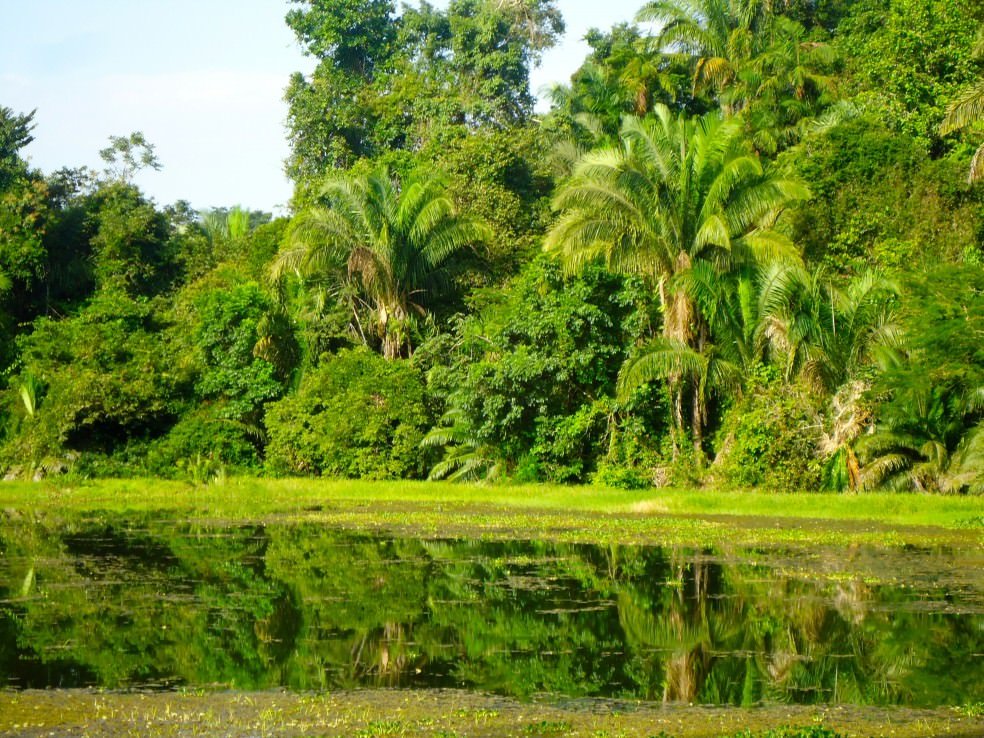 The greenest lake ever!

But there were only just a few birds, and by now others were beginning to flood the park so we trailed back through the forest and left, stopping on the way at Gatun Lake, part of the Panama Canal.

The Lake is a special place where you can see Egrets, Jacans, Snail Kites or if you are lucky a Caiman or Crocodile.

Except there were no crocodiles, just giant storks flying around and dive bombing the unfortunate fish which swam too close to the surface. 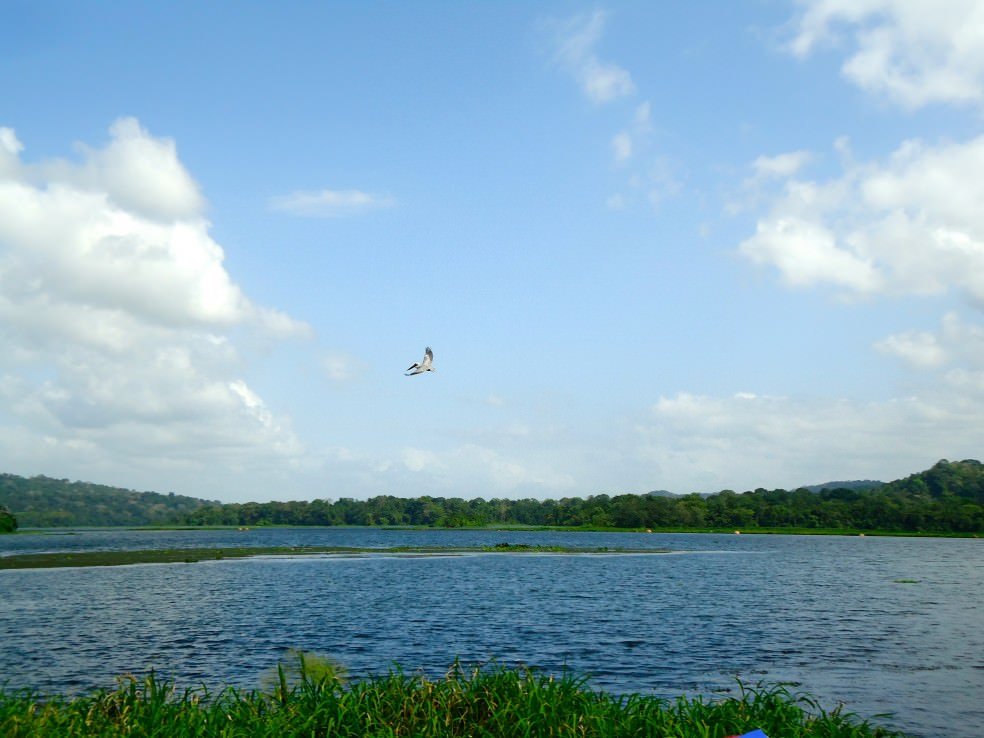 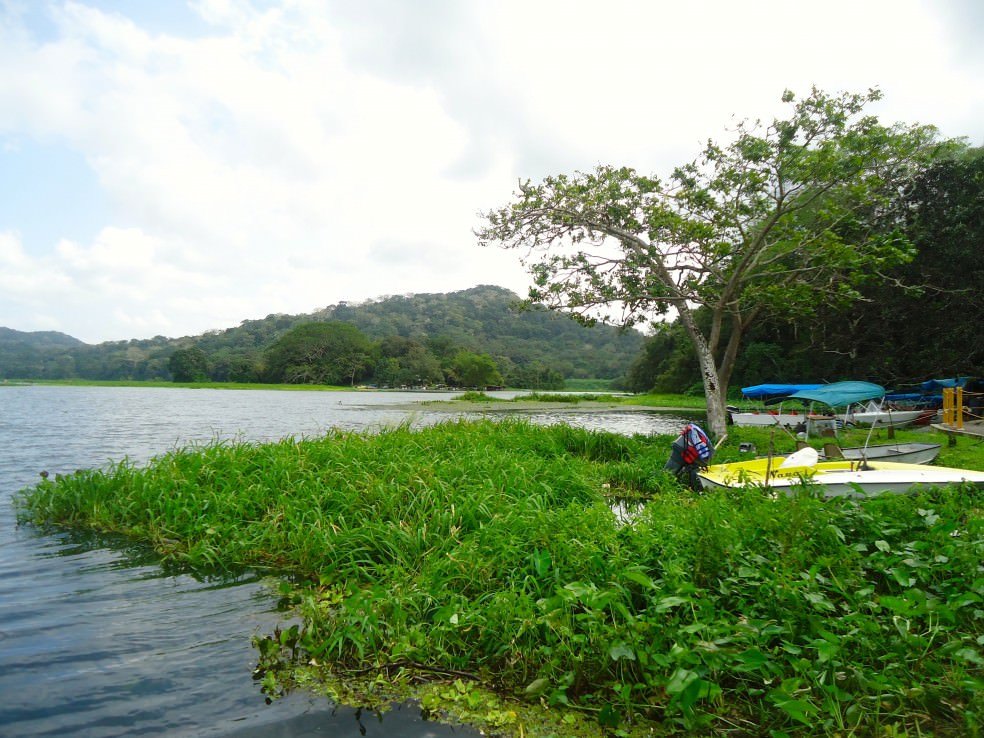 Then it was an afternoon visit to a small wildlife sanctuary (or so they call themselves). Always dubious about seeing caged animals, I wondered around admiring the exotic plants with red leaves that produced a red dye bright enough for a ruby lipstick, and trees with strange names such as the Monkey Pot tree, with seeds so tasty that they grow inside a woody capsule to prevent them being eaten by animals. 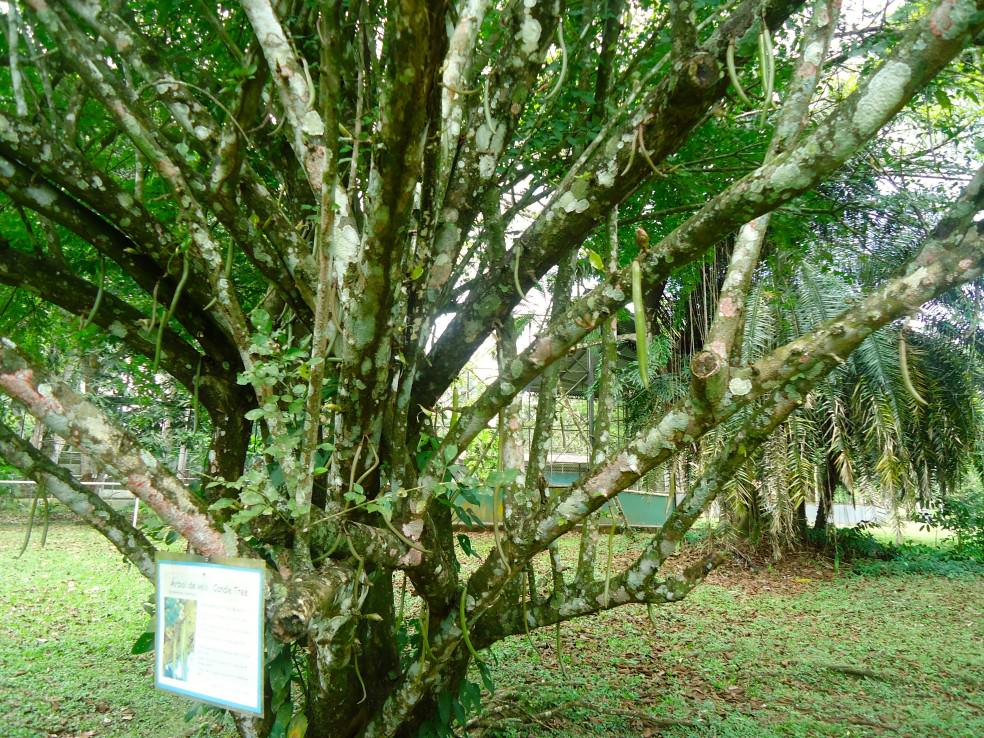 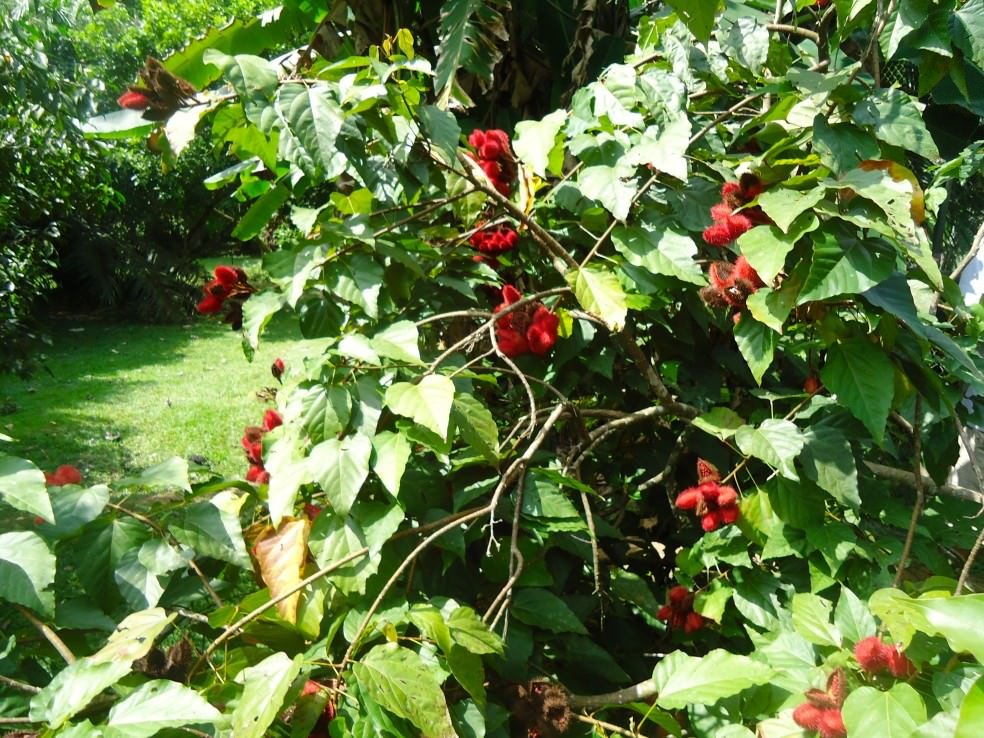 Then after a conversation with a bilingual parrot, we made our way to the final part of the park by the tranquil pond where I did my bit for wildlife and saved a turtle about to be snatched by Pablo, who claimed that he was only going to wash its shell in the water. 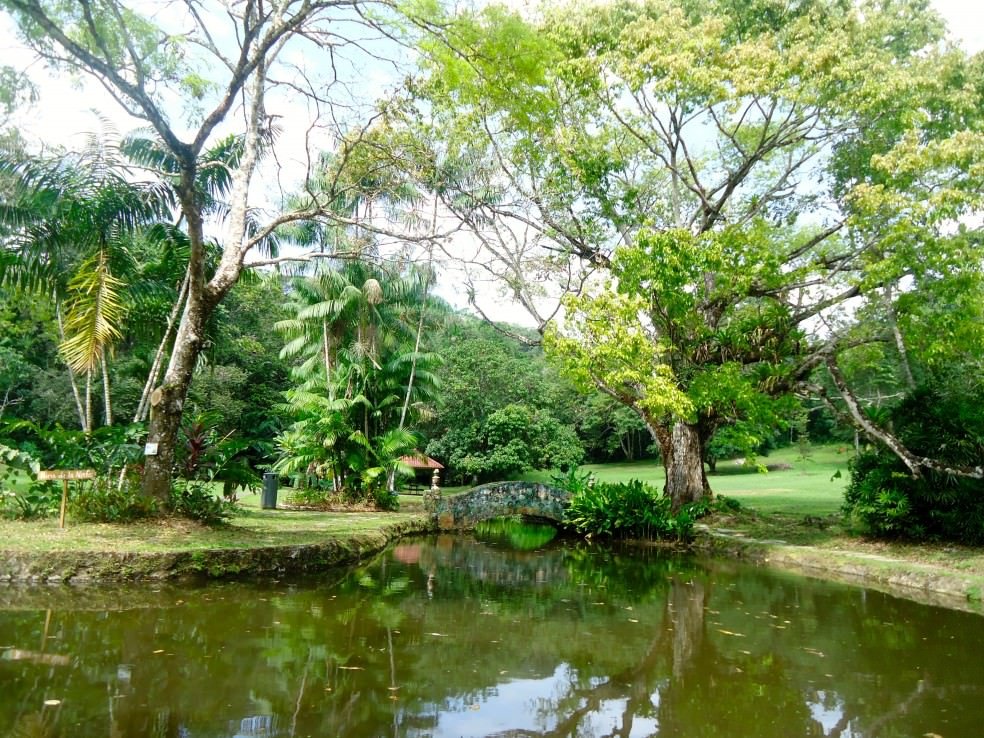 The crime scene for the turtle snatching.

But the midday heat proved to be too much, and after being awake since 4.30am we headed home. Did we make it for the sunrise? No, but I did get my annual amount of bird spotting in and although I didn’t spot a crocodile, this toucan definitely made up for it.

Now that’s what I call a bird. 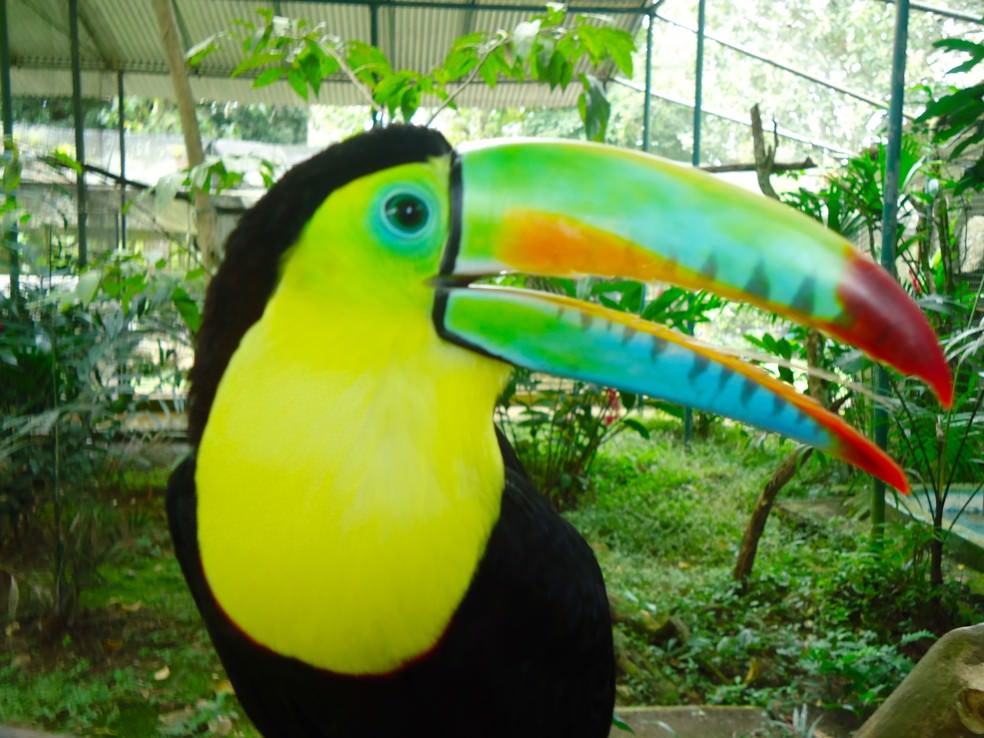 A toucan posing for the camera. 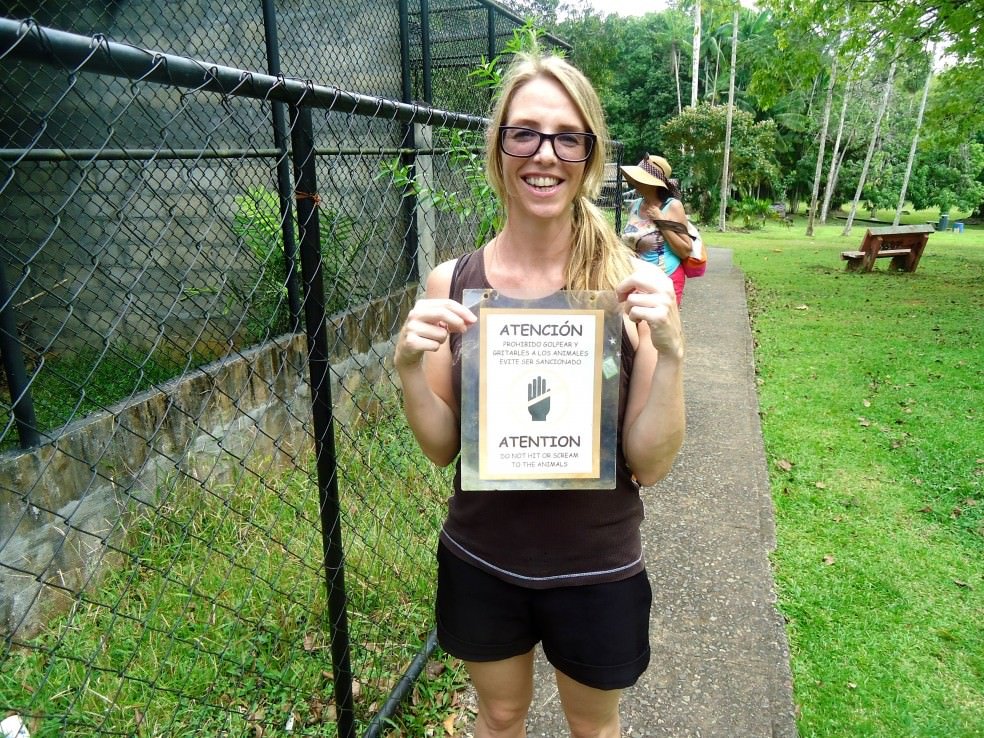 Getting To Panama Rainforest Discovery Center

We travelled here by 4X4 which is the best way to get here but if you can't hire a car then hire a taxi driver for both ways and ask them to wait for you as you explore the park. The only bus service is CoopSACA which leaves from the Plaza 5 de Mayo and drops you off 5km from the entrance. It costs US $30 to enter the park.