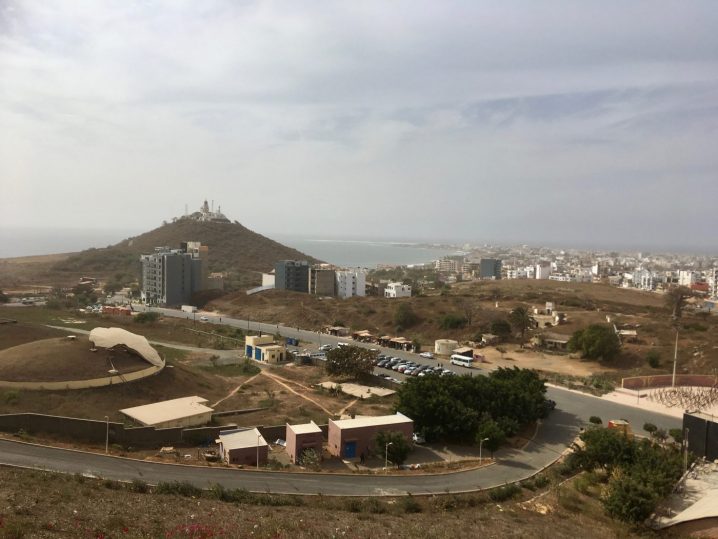 As I stepped of the plane, I relished in the ease of walking through immigration, of the need to not have to show my yellow fever certificate, or have to queue for my eVisa or to wait with the anxiety about having to answer questions in the hope that my visa would allow me into the country. Compared to the other countries I had just travelled to in West Africa, Senegal was a breeze.

Rewind just one week before and Senegal wasn’t even on my radar. I was meant to be in Cameroon heading through Central Africa on a tour but life had had other plans for me and after being rejected for a Cameroon visa in Cote D’Ivoire I found myself with no other option but to go home.

Always one to see as much as I can, there was no way I was just flying home defeated. Instead I found myself booking a flight to a visa-free Senegal which was technically ‘on the way’ back to the UK. With the promise of Africa’s tallest statue and a pink lake, this was a country I was finally excited about travelling to.

Arriving in Dakar, the capital felt so different to the countries I had just been to. It was more developed than Ghana, Benin, and Togo and seemed so much more civilised than Cote d’Ivoire yet it still kept its rich West African culture amongst the modern buildings and giant monuments that had transformed this cosmopolitan capital city into one of arts and innovation.

After 5 days of exploring this African city (reduced by two days thanks to a cancelled flight), Dakar had restored my faith in West Africa and had ended my trip on a more positive note.

If you are planning your Senegal holidays, here are my favourite things to do in Dakar as a solo.

Things to Do in Dakar 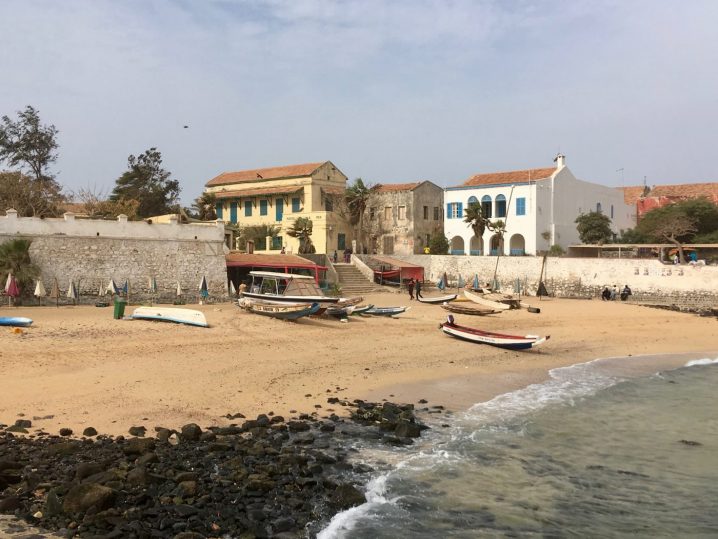 As the most visited place in Senegal, Gorée Island is also the most educational. This island of less than 2000 residents holds a history of suffering and is home to the ‘Door of No Return,’ playing an important role during the centuries of slave history.

A UNESCO site since 1978, Gorée Island had a unique positioning. It had a convenient position, was easy to defend, and was a safe harbour to the West Indies. All of these factors made it a prime spot for the slave trade in Africa. 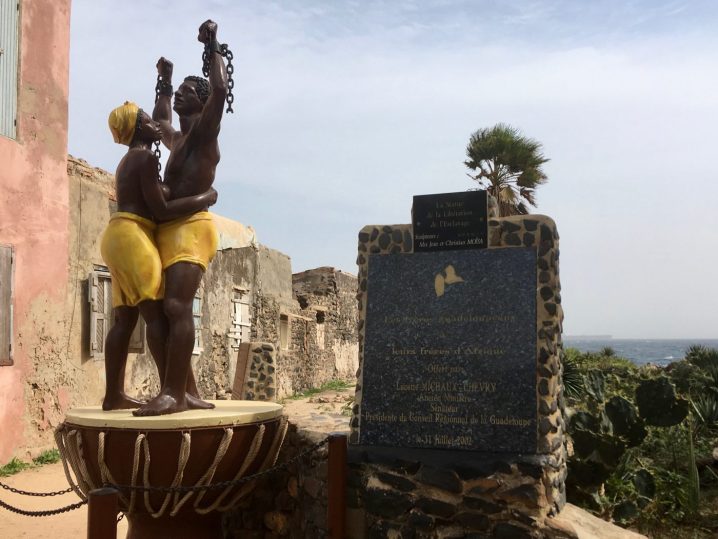 Slaves were bought to Gorée Island and held in cells for 3 months before leaving through the ‘Door of No Return;’ some choosing to throw themselves into the water and drown as the only alternative from a life of slavery. Whole families were brought here then separated into cells for the women, men and children.

Taking a tour inside one of the remaining slave houses tells of the suffering they had to endure, packed into cells with shackles around their feet and barely no room to move. It’s heartbreaking to hear what happened inside la Maison des Esclaves, just one of many on the island. 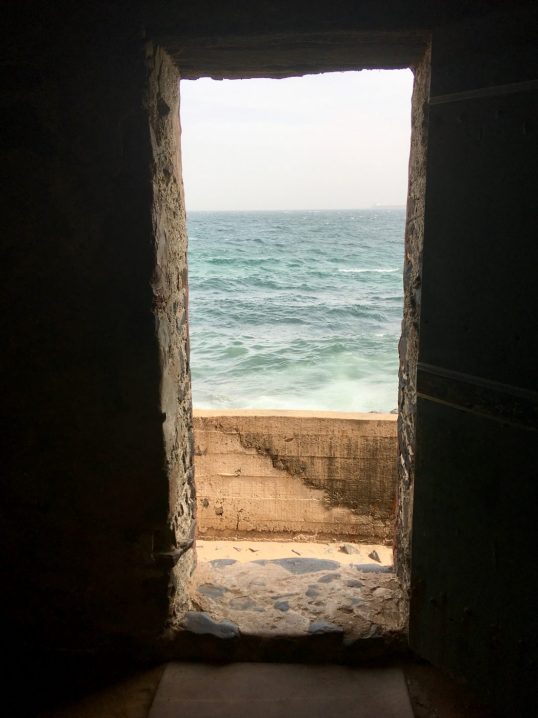 The Door of No Return

Historical, educational and extremely moving, Gorée Island is unlike any other island I had visited. It’s a twenty minute ferry ride to the island from the city. Sit on the right-hand side for the best views of the island as the boat comes in. 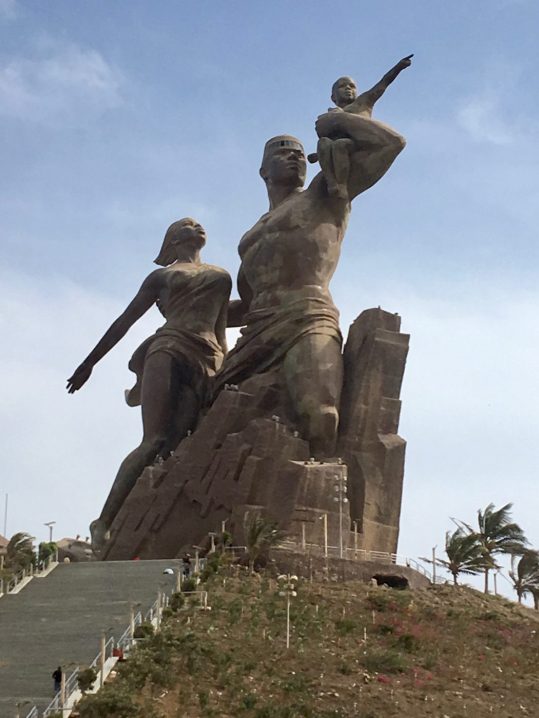 Dakar is home to the tallest statue in Africa, the African Renaissance Monument, a striking example of twenty-first century Africa to celebrate Senegal’s independence from France.

Standing on a hill 100 metres tall, the statue dominates the coastal skyline. There are approximately 200 steps to climb to reach this bronze masterpiece where you can go to the top of the crown and get panoramic views of the city. 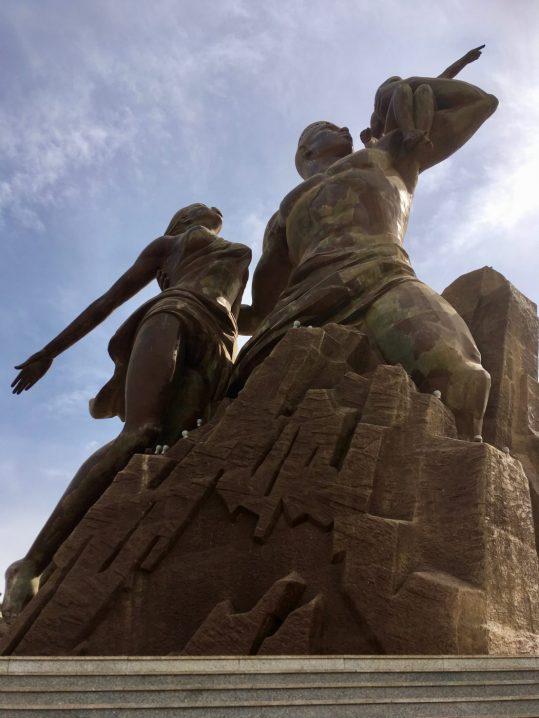 Taller than the Statue of Liberty, this 49 metre high statue is controversial with locals believing that the figures aren’t a true representation of Africans.

The idea of former president, Abdoulaye Wade, the statue was built to bring tourism to the city. It now lines his pocket with 35% off the revenue going to the ousted ex-president. But you don’t have to pay to see it. You can just climb the steps and not pay the entry fee to go in. Just be careful if it’s a windy day as I nearly lost my flip flop at the top! 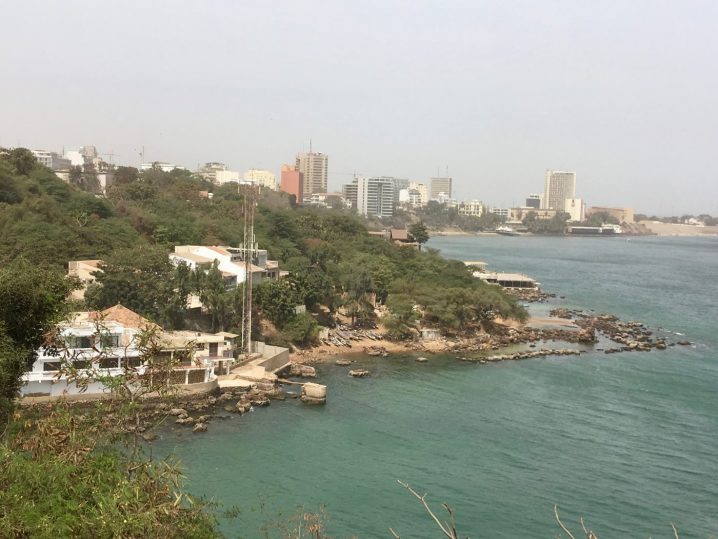 If you like architecture then Dakar has some interesting buildings to see. With a rich heritage the city is very cultural and has a number of cultural places to visit. The Museum of Black Civilisations is a museum that represents the cultures and histories of Black nations. Only recently opened the museum shows the story of the slave trade and the communities of Africans in America.

Inside the Musee Theodore Monod d’art is the largest collection of West African artefacts. From drums to African clothing you can learn more about the culture and diversity of this region’s tribes. The descriptions are also in English as well as French so it’s easy to follow. The National Gallery of Art is perfect for Arty Girl about the Globes or you can visit the National Theatre which is less than a decade old. 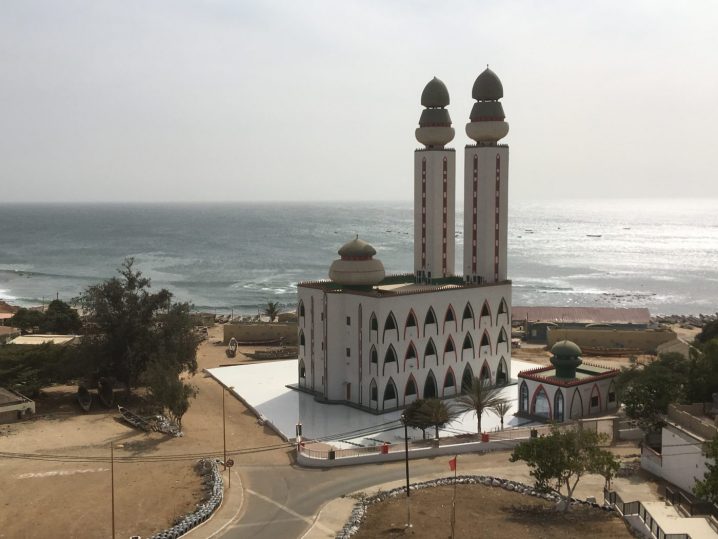 Being a peninsular surrounded by water means there are some great views of the coastline and what better place to build a mosque than right by the sea? The Grand Mosque is definitely an impressive site with its green and white tiled roof and large minaret against coastal views.

The Cathedral of Dakar is another beautiful religious building. Built in 1929 it is adorned by four angels on its exterior. It’s also known as ‘The Our Lady of Victories Cathedral’ and was built on top of a Muslim cemetery.

There are monuments all around the city such as the Gate of the Third Millennium which symbolises Senegal’s entry into the twenty-first century and represents unity and hope.

One moving monument is the Place du Souvenir, a memorial to the Joola ferry disaster in 2002. One of the world’s worse maritime disasters which resulted in 1863 lives lost. 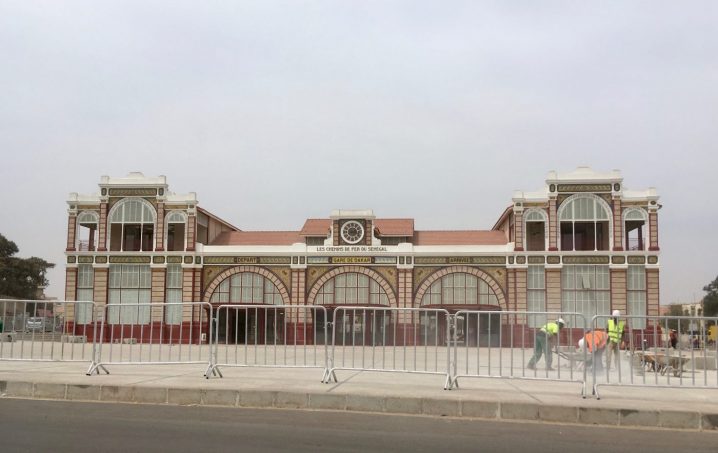 The main square in the city is Independence Square where you can see old colonial buildings such as the Chambre of Commerce. Another example of architecture from the colonial times is the train station which was built in 1885 with pretty facades and a giant clock.

When you've seen enough buildings and are ready for some local interaction head to the popular fishing market where you can see (and smell) the daily catch from 5pm. If you love arts and crafts then head to Soumbedioune Market for African carvings and statues. 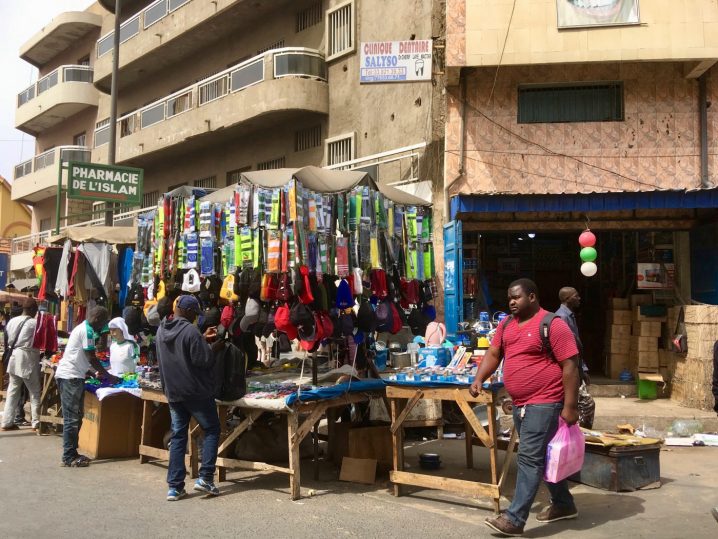 Another popular market where you can buy anything from a pair of shoes to African-style tops is the Sandaga Market, the biggest of the markets in Dakar where each store is owned by the Senegalese. Students come here to buy books and the market is a daily hive of activity.

The sights are quite spread out so it’s easier to get a half-day tour which also includes the African Renaissance Monument. 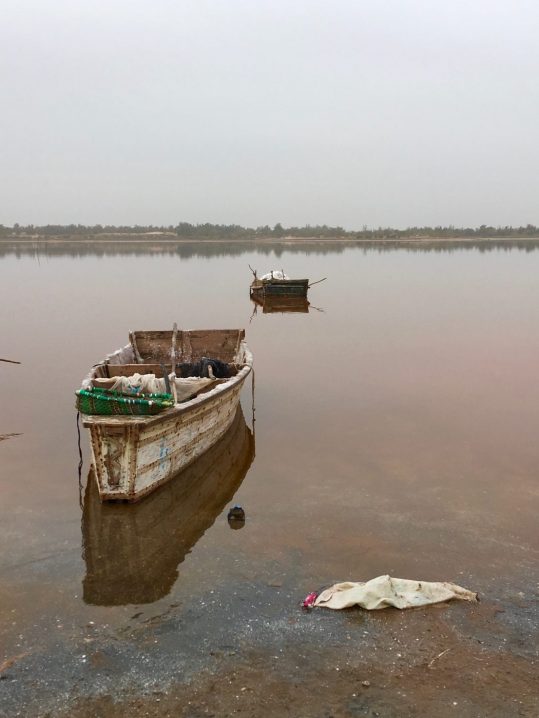 Referred to as the ‘Dead Sea’ of Africa because of the salt content, the Pink Lake (Lac Rose) is 45 minutes outside of Dakar so you’ll need to hop on a bus or take a tour to get there.

Even the drive there takes you away from the modern buildings in the city and offers a lens into real Senegalese life where horses are used for transporting goods, and unemployed youths are selling by the road side. 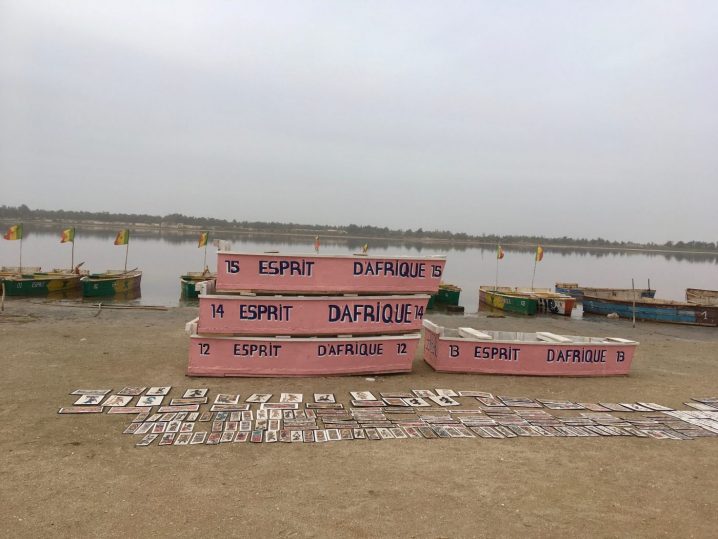 The best time to see the pink lake is when the sun is shining. The pink colour is due to the algae that lives in the freshwater. Approximately 1,000 people work here. The men load the boats and the women unload and pile up the salt.

It takes 70 bags to fill a boat and the men can be working up to 4 hours for one boat. Because of the high salt content in the water men smother themselves in shea butter for protection (which you can buy everywhere in West Africa) and work just three days a week. 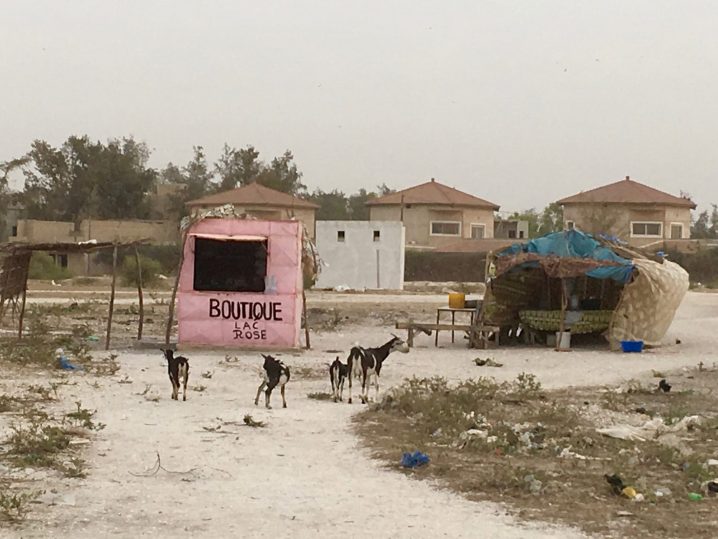 The salt takes 3 days to change from the grey colour when it’s removed to white after being iodised. The lake is managed by the villages that surround it and you can interact with the local ladies and their children as they all make friends with you to buy their souvenirs. Plan your visit here between 12pm – 3pm when the sun is shining to see the lake at it’s pinkest. 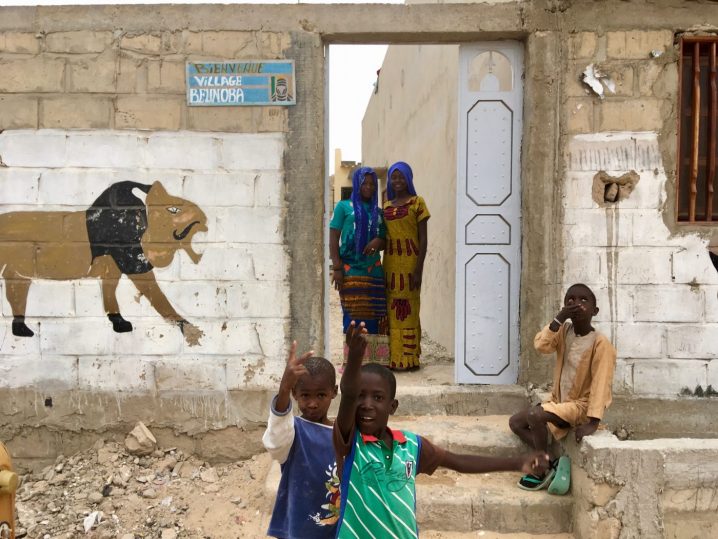 From the pink lake you can take a 4-wheel drive through the sand dunes to visit a traditional village and interact with the locals. The 4-wheel drive was an experience in itself. Holding on tightly to the rail above me I could hear myself shrieking and laughing as we bounded over sand dunes as I was flung around. 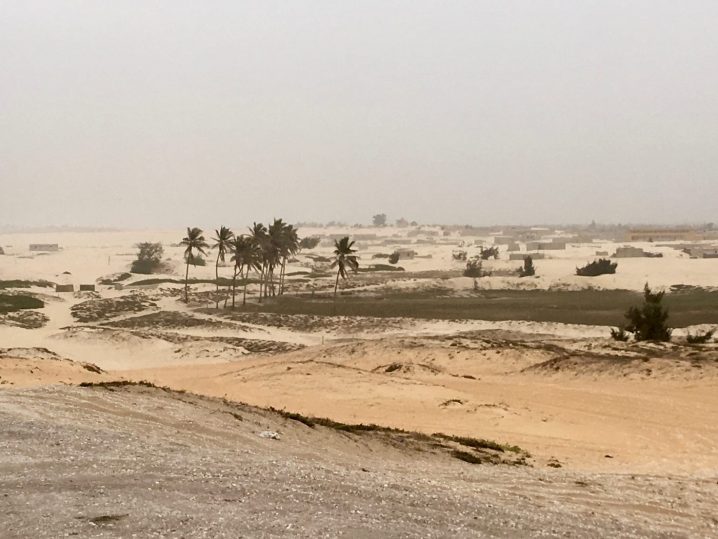 Passing camels (just for the tourists) and different coloured sands, we sped across to the village of Beunoba, to meet the Fulanis, a tribe of nomadic cattle herders who since the 1973 drought have set up home near the lake and live in stone buildings instead of huts. 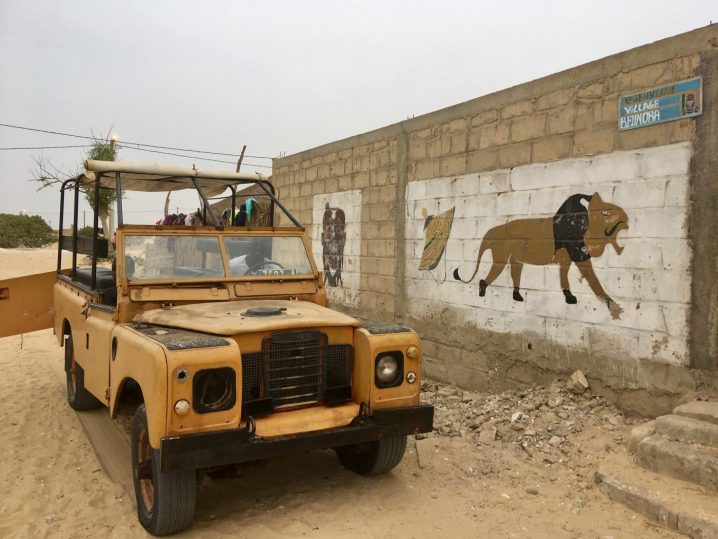 As the only visitor in the village, I met the stand-in chief and was escorted around the village with children waving at me and running up to have their picture taken. There are 450 people living in the village; the majority children.

The tour money goes towards the village and helps the children who once had to walk 3 kms to school and now have one built in the village. I can’t tell you what a privilege it was to visit the Beunoba village and what a hair-raising and exhilarating drive it was back to the lake. 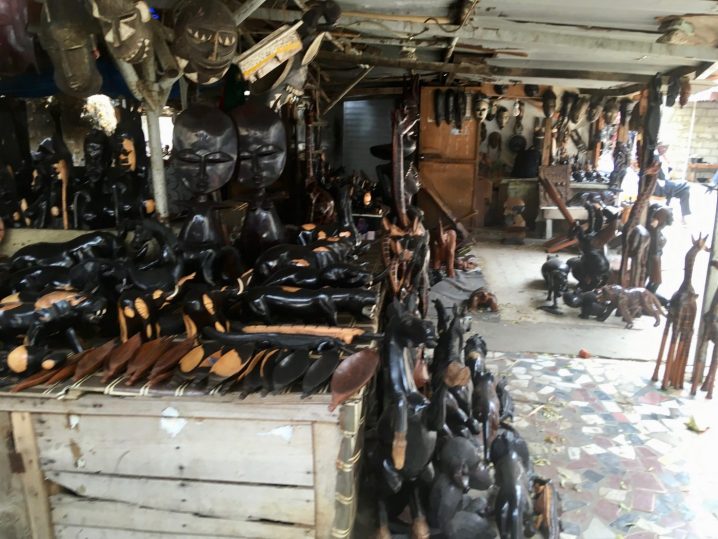 Being an avid collector of statues from around the world, I was in my element in Senegal. This is the place to collect any kind of artwork you can think of from pictures created out of different coloured sands from around the country, to those made from glass. 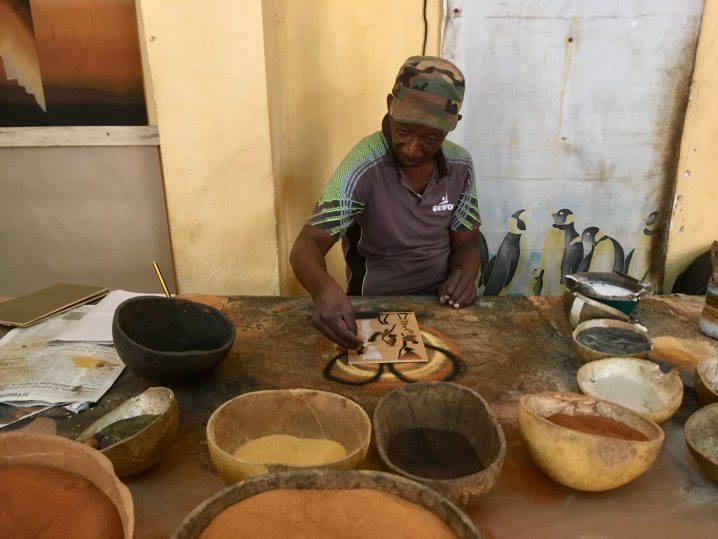 Gorée Island is a great place to see the artists creating the coloured sand paintings. You can buy them from the studio where you saw them being made. Other art stalls are decorated with giant tapestries in vibrant reds in true Senegalese style.

Visit Soumbedioune Market, the largest art and craft market in Dakar for African carvings and statues and if you’re not into artwork then you could take home a large colourful basket instead (just check your hand luggage restrictions first :)) 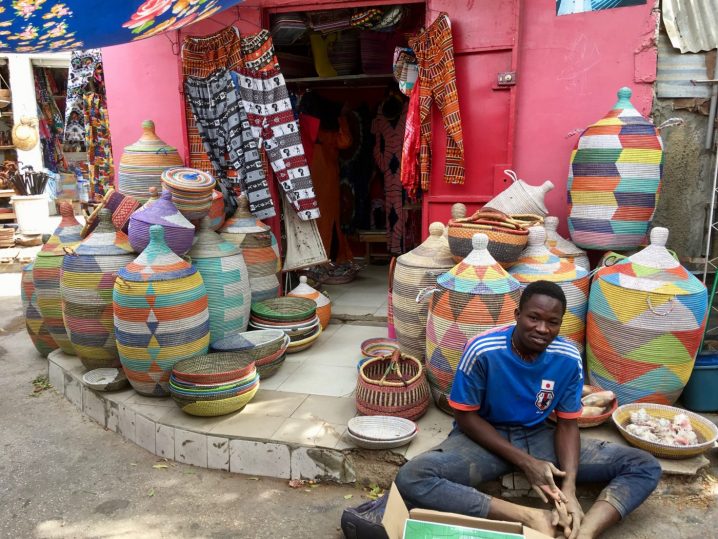 The colourful baskets being made at Soumbedioune Market

I travelled to Dakar as a solo female traveller and booked my tours through Senegal Odyssey Tours. My local guide Oumar picked me up from the airport and took me straight to the Pink Lake. I spent the next 24 hours being taken around the city and learning more about Senegal and its history. Oumar was really knowledgable and I immediately felt at ease. My tour was complimentary but I only recommend tours which I believe are solo female friendly and I definitely recommend spending some time with Oumar especially if you are coming here alone. 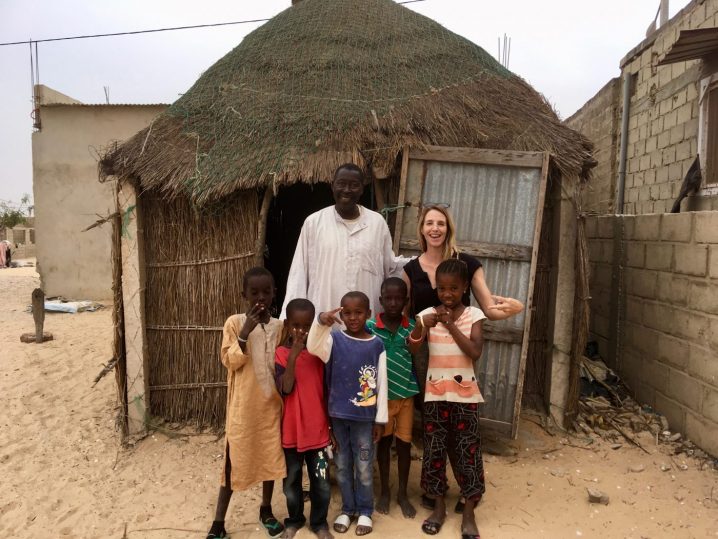 Being overwhelmed by the children who wanted to have their picture taken with me!

Is Dakar good for solos? I think it’s a good starting point to West Africa (if you can get by in French). It feels safe for women travelling alone and is more comfortable than other West African cities. You also don’t attract the attention that you get in Ghana for example.

Have you been to Dakar? I'd love to get your thoughts below… 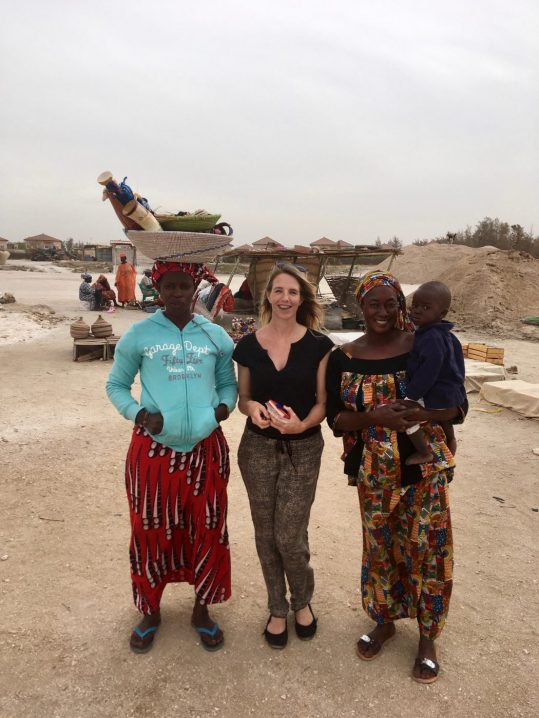 Meeting the local sellers at the Pink Lake

2 thoughts on “My Unexpected Senegal Holidays”