Although this six-day France road trip was taken at a crazy pace, any single one of these destinations would make a perfectly wonderful place to spend a lot more time and, further, would justify a visit all on its own.

You know that feeling when you’re driving along practically empty, well-maintained roads through beautiful wide-open countryside, the sun is shining and you’ve left your ordinary real life behind and suddenly everything just feels wonderful? It fuels you, doesn’t it? And then, everything is wonderful, because really, it’s all about the feeling…

That’s where I was at when I pulled up in front of Les Orangeries in the tiny town of Lussac-les-Châteaux, in the Poitou-Charentes area of France. If you picture France as roughly a square, it’s about midway down the left-hand half, about a four-hour drive from Caen, where our overnight Brittany Ferry from Portsmouth landed.

It looks nice enough from the outside – all honey-coloured stone and verdigris trim – but its innocuous roadside face was just a front for a hidden world of loveliness behind, which included a large back garden with pool, orchard, patio, lawns; and, inside, the sort of nonchalant French wooden cupboards, stone floors and muted floral upholstery fabrics that make you wonder how they do it so well and justifies all that’s said about the French sense of style. It just looks so effortless and beautiful.

I was on a mission to write about all things ‘green’, so it was straight out again to follow the chef to local organic flower and herb garden Le Jardin des Possibles, in nearby Persac, created from scratch four years ago by the pixie-like Nicole.

On her compact site, all farmed by hand without machines or chemicals of any sort, Nicole grows edible flowers and roots, herbs and – amazingly – even peanuts; all on the permaculture model of co-planting with partners that ward off pests or lure helpful bees, working with nature rather than forcing it to perform. Nicole supplies two local restaurants, sells at market and is keen to attract passing trade, so if you’re in the area, definitely visit. She must work from dawn to dusk to keep it all so abundantly healthy and productive, but it’s also clearly a labour of love, as she never stopped smiling or chatting, sharing her passion.

Then it was back to Les Orangeries for a delicious three-course dinner featuring Nicole’s flowers and herbs, that somehow drew the ends of the lines of the day into a neat circle.

Before setting off, I went for a walk around Lussac-les-Châteaux and found a lake with the ruins of a viaduct running through it and a number of ‘wool bombed’ trees and fences. This is an initiative to bring different generations together to knit and wrap the products around objects in the public domain to illustrate a knitted-together society. Nice.

Then it was back on the road, refreshed after probably the prettiest breakfast I’ve ever seen, all heaving sideboards and fresh, local produce.

Next stop was Les Clauzades Vieilles, near Saux, in the Lot Valley of the Midi-Pyrenées region. Continuing with the France-shaped-kind-of-like-a-square analogy, this is still on the left-hand side of the country, but in the bottom half rather than the middle.

A privately owned, 17th-century, three-acre walled estate that sleeps 12 in the main house and another four in the cottage, it has a swimming pool (heated, of course), tennis court, fountain, baby grand piano, bits of armour, swords and lots of books written by the owner (fantasy author Stewart Binns) lying about. There’s nothing quite like driving through a gated entrance onto crunchy gravel to make you feel you’ve arrived – in every sense…!

You can be totally spoiled here if you choose, and have a private chef come in and cook your meals for you, while you simply sit by the pool sipping an aperitif and watch the sun set. It doesn’t come cheap, but if you’re looking for a fairy tale, you could do a lot worse…

I had to tear myself away from the gated house, as there were two stops to make today. The first was Gîte de la Figuerie, in a tiny hamlet of just a few houses called Barrau, in the Tarn et Garonne region. It was a bit over four hours’ drive from the enchanted Les Clauzades Vieilles and about 90 minutes’ drive north of Toulouse.

In fact, it was such a tiny spot that I kept driving past it and, even with a map and directions, just couldn’t pin it down. In the end, it took a call to the owner, Jennifer Boncey, to come find me and lead me there to find it…

It’s worth the extra trouble to get there though. Her extraordinary 19th-century farmhouse looks as if it’s slowly going back to the earth from which it sprang. Her next-door one-bedroom gîte that she rents out used to be – quite literally – a pigsty, but is now terribly charming accommodation, provided you’re happy to have a slightly blurred distinction between inside and outside. Aside from Jennifer’s house – who’s not exactly throwing raves – it’s not near anything, so it’s fantastically quiet, except for the drone of insects and the twitter of birds. The views – because it’s up on a ridge – are far-reaching. This is the place to come if you are in search of real peace and quiet. However, if you can get Jennifer talking, you will have more than enough entertainment. She’s lived an extraordinary life, is committed to upcycling just about everything that comes her way – to whit, she used linen she’d put by 40 years ago to re-cover a couple of the gîte’s chairs – and, while British by birth, speaks German and French very well indeed and probably another couple of languages too. This farmhouse is where she’s spending her retirement, though it looked as though she was still working pretty hard.

I’d have liked to stay and listen to more of her stories, but I had more miles to go…

Still in the Lot Valley, but now in the Aveyron Department of the Midi-Pyrénées, is a little group of renovated ancient stone buildings huddled together on a steep valley above the Lot River now called Sweet French Cottages. One of them was the school house, one a chapel, one something else – and each is now done up to the rafters like something out of a glossy house magazine by American couple Lance and Rain Heron. (Yes, those are their real names.) Escapees from Los Angeles, who once travelled in the exalted circles of Paul Simon and Stevie Wonder, they now make their living doing up old French properties and renting them out or selling them on.

The nearest town is Entraygues-sur-Truyere, just 3km away, where you can pick up supplies, eat out or visit the weekly market – though you can also order in a breakfast hamper of goodies to be delivered to your door by one of the Herons.

Again, I could have stayed here for some time, enjoying the wooded countryside, the pretty medieval villages, the wine…

Another four-plus hour drive day (I was used to it by now!) and I came to a holiday village, but not like one you’re likely to have experienced. A 12th-century farming estate in Provence that’s been thoughtfully and ecologically turned into holiday accommodation, some hotel rooms, some self-catering cottages, which share a pool and are surrounded by 170 hectares of vineyards, fields and woods. The nearest town is Bras and it’s just 45 minutes from the French Riviera. Plus, if you need a starry recommendation, Brangelina’s place is “just round the corner”. But what makes this such a great spot – aside from the lovely French countryside – is, once again, the owners, Martina and Claude Fussler. She’s German, he’s French, but everyone speaks perfect English, including their teenage son, who skips from one language to the next, including Italian and Spanish, as easily as some teenagers flip channels on TV.

I won’t forget the wonderful dinner with the Fusslers and some friends of theirs (one Turkish, one German-Italian) amid a wonderful ambience of international bonhomie and, once it was truly dark, the nature walk their son took us on to look at glowworms behind the stables, where we were practically deafened by the croaking of frogs. A magical memory…

The final stop was Valmondois, a suburb north of Paris and a good eight-hour-plus drive straight up the back of France from Provence. Mad? Possibly, but by now driving was what I did and it wasn’t even tiring. Is funny how quickly you can get into the spirit of moving on, though I did feel like I left a little bit of my heart in each of the places I’d stayed.

Pretty and village-y, but served by commuter trains which stop just 200m away from host Elizabeth Fort’s house, this makes a nice option to staying in downtown Paris or as a place to visit on its own. It’s worth knowing, however, that Elizabeth speaks no English, but I wouldn’t let this put you off: even though my French is pretty terrible, we managed to make each other understood, and she’s wonderful helpful and friendly. Her neat house is behind one of those gated walls the French are so fond of and I can see why: there’s a wonderful sense of privacy and safety once that gate is shut – and in her garden is a swimming pool! Not a bad place to flop in after a day traipsing ‘round the capital’s sights.

Elizabeth lets out one room on a B&B basis and only to either single folk or, in a pinch, two friends. So, no couples. However, as a solo female, this is absolutely no problem, of course! The bed is comfy, the neighbourhood quiet and, in the morning, she serves up a filling breakfast of croissants, eggs, coffee and cereals.

While you could hop on the train and be in Paris in no time, the nearby town of l’Isle Adam is terribly pretty, has lots of little cafés and restaurants, a jazz bar and you can get there by walking along the River Oise.

My final tip: France makes for great road-trip country, with lots of decent roadside loos, not a lot of traffic and and well-maintained motorways, but give yourself a little more time! 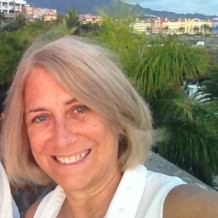 Liz Granirer, an American based in London, came late to travel but, now that she’s discovered it, she’s definitely hooked and is trying to see as much as the world as possible, either with others or on her own. She works as a freelance journalist, writing for inflight magazines, including easyJet’s Traveller, United Airlines’ Hemispheres, Jazeera Air, Jet2’s JetAway and Thomas Cook. She also compiles and contributes to the family travel features for parenting title Right Start magazine, and writes for websites greentraveller.co.uk, WeAreTheCity.co.uk and OurManOnTheGround (omotg.com). As well as travel, she provides interviews and features on entertainment for the magazines Young Performer/Performer and Step Forward. She also writes a travel blog, which can be found at lizgranirershelloworld.blogspot.co.uk