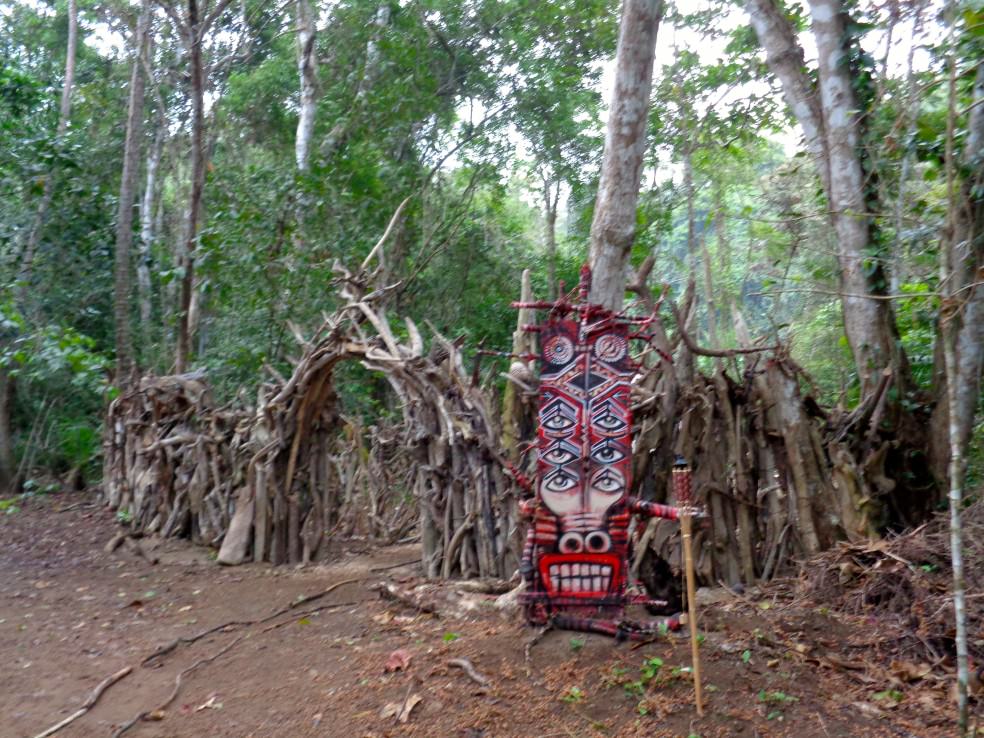 I could feel myself floating in and out of consciousness, as the sound of beating drums grew closer. Was this all a dream?

Being at Geo Paradise and wanting to understand more about shamanic rituals, I had decided to take part in an ayahuasca ceremony. I am not usually one for hallucinogenic drugs but a series of serendipities lead me to this event and within hours of arriving at Geo Paradise, I found myself basting my gums in a basil mixture, and having my head painted, ready for my ayahuasca experience. With a Colombian shaman taking the ceremony, this was definitely fate.

“It’s beautiful,” said the smiley people I had quizzed beforehand, and even though it felt right, I was still apprehensive about the whole ceremony but being so into spirituality and energies, I could not let this opportunity pass me by.

As I sat patiently waiting for my turn to take the bitter tea, the shaman explained more about this medicinal drug.

Ayahuasca or Yaje as it’s known in Colombia is a spiritual practice that claims to take you back to your core being and onto the next level in your spiritual journey. Originating from Brasil, where it is normal for ayahuasca to be given to children in small portions, ayahuasca churches opened in the 1950’s making ayahuasca accessible to urban people and not just indians and shamans.

The visionary ingredient in ayahuasca is DMT which has been described as the ultimate meta-physical reality pill, even though it’s more of a plant than a pill. For the ceremony it was to be served in a tea form. 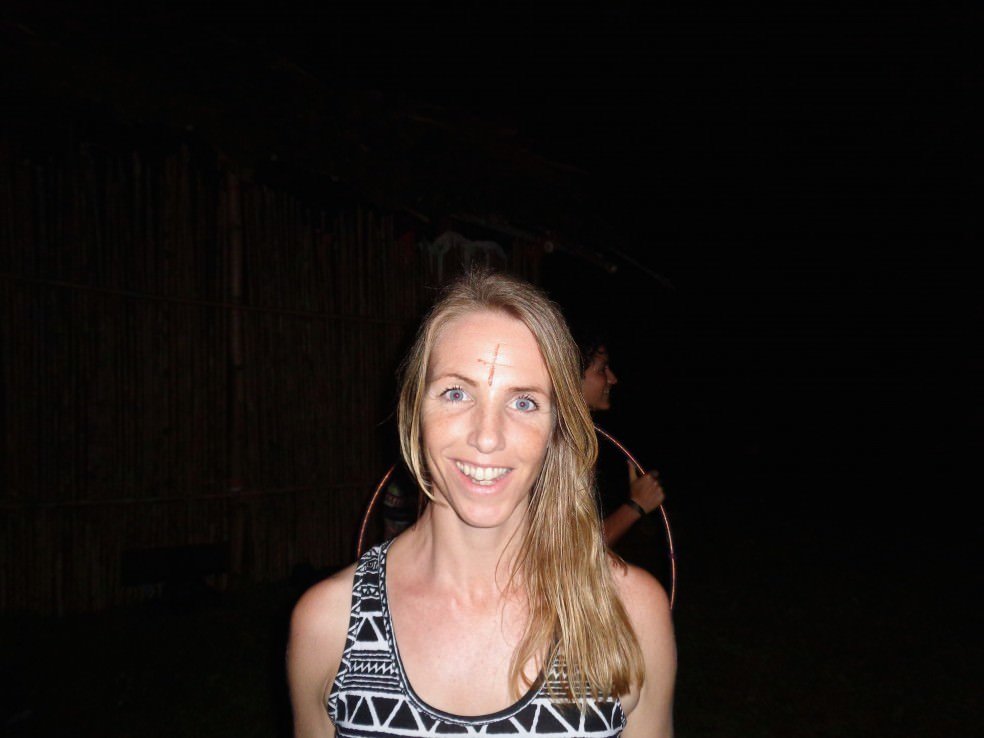 Men were to come up first then women second. Those who had not done it before were to go last. There was only a handful of us on our first time. I took solace in the fact that it couldn’t be that bad, otherwise people would not keep coming back for more.

“If you feel like talking, come back and do some more,” the shaman said to the response of laughter in the camp.

I was sat on a large blanket surrounded by what looked like nearly 100 people. Some with dreadlocks, others sat half-naked but most sat in silence, eager at the anticipation of the ceremony. As one of the side effects was cleansing the body, you were pretty much guaranteed to be sick at some point during the process, so large plastic buckets were placed around the ceremonial grounds in addition to the two bathrooms.

Thinking it would be more like a cava ceremony I had once experienced in Fiji, I was surprised to learn that no one could leave until the morning. This was to ensure you remained in a safe environment until the effects of the ayahuasca wore off.

After the shaman had blessed the plant and chanted, people began to line up. I waited patiently for what felt like an hour then took the cup and drank. My throat instantly clammed up to the bitterness of the tea and the roughness of the plant roots that had merged into more of a paste than a liquid. I regained my position on the blanket and waited, laying down, gazing up at the stars. Others were also lying down or sat in a lotus position meditating. This was it. I had taken the first step on my ayahuasca journey.

The shaman had told us to set our intention so I quietly asked for my first experience to be a subtle one. I didn’t want to see figures or be taken somewhere out of the realm that I knew, I just needed some signs and clarity that I was on the right path.

Without a watch, I had no sense of time. It took a while until I felt anything and at first, I hardly noticed anything except the urge to vomit. As if sensing my feelings, a guy sat opposite me beckoned me to come over and produced a bucket. I sat there feeling embarrassed that I was just about to be sick in front of people that I didn’t know. I laid back down and the man, who I later found out was called Mark, put his blanket over me as I slept.

I was floating in and out of consciousness and each time I woke, I could hear the drums of the shaman beating and people dancing around the fire. Then I was gone again, lost in a mirage of colours and visions that were just glimpses in my mind, and not around long enough for me to identity any of them. I could hear my inner voice so clearly. Each thought I had was being answered clearly and I knew that this was the intuition that I had been seeking. I now had cramps in my stomach and realised that this was just part of the cleansing process.

I fell back to sleep, fighting off the sickness feeling then woke again to someone screaming “You’re all beautiful.” I could hear a girl sobbing, and others vomiting whilst many cheered and sang to the guitar music that was now being played. 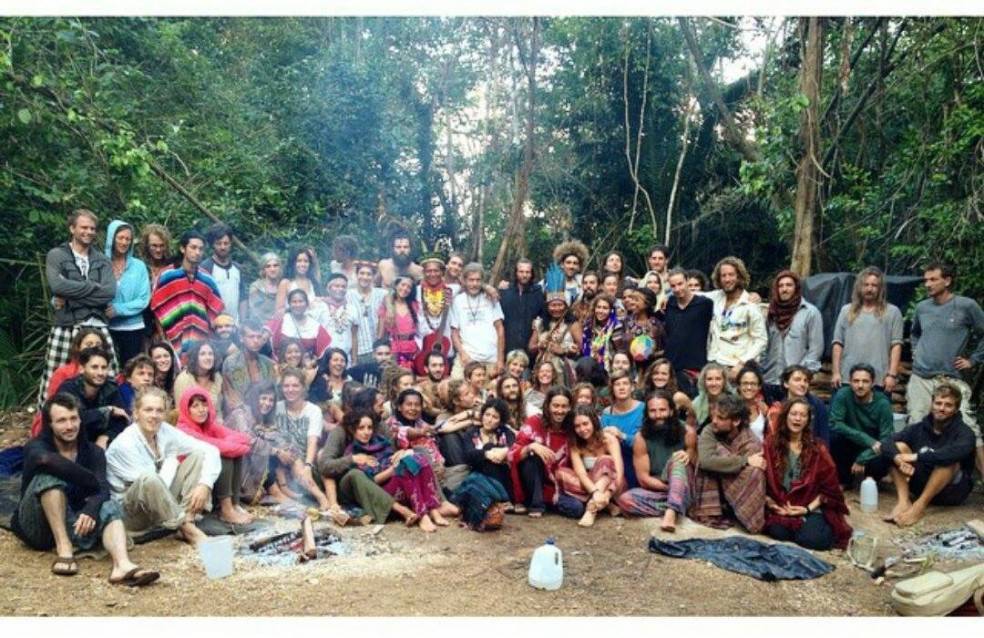 As the night went on, I could feel the dampness of the ground coming through the blanket as the cold of the night crept in. I dreamed of my blow-up mattress in my tent and my own space. It was all becoming too much for me. There was just too much noise and too many people. I didn’t want to be here anymore and wanted to leave but looking up at the sky indicated that it was still night and I couldn’t leave until dawn broke. All I could do was try to sleep it off.

I drifted off again and awoke with a hand on my shoulder. “I’m leaving,” said Mark, the one who had looked after me. “You can keep my blanket,” he added. Thankful it was morning, I packed up my things and walked out of the grounds with him, feeling floaty, thoughtless and rather invigorated.

I slept back in my tent for two hours until it was time to give my Reiki treatments. For someone who had just been awake half of the night, I felt surprisingly refreshed and ready for the day.

“You look like an angel,” said a stranger as I glided past. I felt weightless, and mindful. As if nothing could shatter this amazing mood I was in.

For the next 24 hours, I gave the most amazing Reiki treatments, still reeling in the previous night’s energies. My mind had less chatter and I slept solidly that night. My first ayahuasca experience had been just what I needed it to be, both mild and enlightening, and I was now convinced that this was where I had needed to be.

N.b. Now I am not encouraging anyone to do this. This is my own personal experience and although they say that in order to keep learning you have to take the plant regularly, this is something that I just wanted to try once.

Warning – According to the Huffington Post, ayahuasca ceremonies are now really popular with tourists coming to Peru, but because of its popularity there are cases of fake shamans using toé, a “witchcraft plant,” which allows them to take advantage of the tourists with robberies and attacks. Make sure you are in a group of people if you are looking to take part in an ayahuasca ceremony in Peru.

7 thoughts on “My DMT Ayahuasca Experience”