Only 1 more day to go until I fly!

First stop: China to trek the Great Wall for the Samaritans, then I'm off to Mongolia to work at Star TV – an English TV station which specialises in news and entertainment. I could find myself interviewing someone from Mongolia's Got Talent or Mongolian XFactor  – watch out Ant and Dec!

Then, I'm taking the world's highest train journey from Beijing to Lhasa, where I tour this beautiful country that used to be the residence of the Dalai Lama. Followed by teaching English to Buddhist monks in Nepal for a month (although I don't know how that will work as I didn't think they were allowed to speak to women!) should be interesting.

Finished with a four-day tour in Bhutan, hiking to the Tiger nest monastery and a night in Mumbai, visiting the slum that starred in the film, Slumdog Millionaire.

Phew!!! It will certainly be a challenge, considering I can't speak a word of Mandarin, Mongolian, Nepalese, Tibetan or whichever language they speak in Bhutan. At least I'll be okay in India, where they speak English. Good job I'm a fast learner! See you soon China… 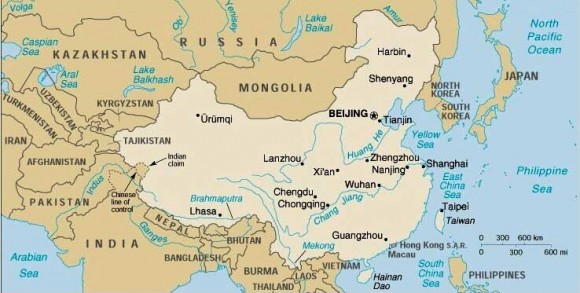 A sea of Chinese faces stared back at me. I fixated on each one, walking as slowly as I possibly could amongst the flow of people, desperate for my name to be flashing back at me in lights. But there was nothing.

Carried by the crowd, I emerged at the exit of arrivals, a lost-looking tourist alone in a foreign land. I had barely touched Beijing soil when I encountered my first problem…

I had no transport…

Tired, drained and resembling more like a dead woman walking than an excited tourist, I found a phone and called the emergency number I had wisely brought with me. Ten minutes later I was a defeated woman – how on earth do you use a Chinese payphone?

Across the airport was my saviour: an information desk with smiley ladies. But alas, they too couldn't access the number – I was stranded, with no Chinese Yuen or any knowledge of the lingo. I was too tired to care.

Was this even real?

Was I going to wake up in a minute in my lovely soft bed in the hotel and laugh at this ridicoulous dream?

And then, like an angel (who wasn't dressed in a white gown and wasn't smiling at me), he appeared holding a sign that didn't have my name or the name of the company on it – Pereguine who? He was an hour late but who cares? He was here and he was going to take me to my lovely warm bed… 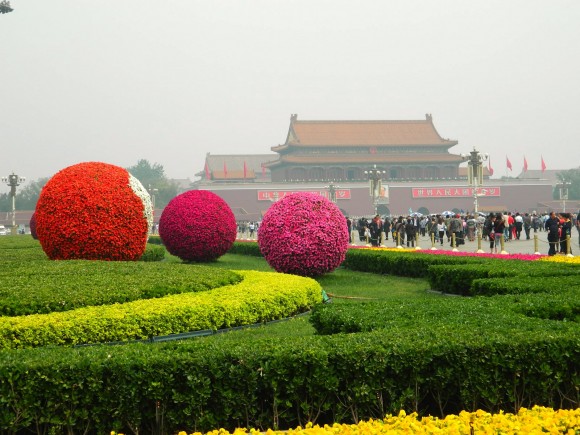 A colourful display at Tiananmen Square

I had left Mongolia well behind and was back in Beijing for a night, and had stumbled across a Chinese bbq restaurant near my hotel. Armed with my Chinese phrases, I attempted to order my dinner, relieved at not having to eat any more beef for a while.

Then my dinner arrived: a tofu salad with peanuts, egg fried rice and a funny looking glass of drink. I asked for the menu back and scanned the drinks: I was sure I had ordered a coconut milk.

And there it was – Mongolian rice wine – which I had ordered by mistake! I reordered my coconut milk and smiled to myself – just when I thought I had escaped the country…

Maybe it was the backpack or the blue floppy hat with the alien logo that was doing it, but something was definitely drawing their attention. Having gone dark blonde for this trip, (thinking I wouldn’t stand out as much), it was really a lost cause.

Everywhere I went people would look at me. I didn’t notice it before, when I was amongst my bubble of a group but now that I had ventured out alone,

‘If one more person stares at me, I am going to lose it,’ I thought to myself as I wandered aimlessly around the zoo, accomplishing my mission of seeing a panda.

I was tired, it was humid and I was fed up of the crowds. Two young boys in matching outfits stopped as I walked past.

‘Here we go,’ I thought as they pointed straight at me, arousing the attention of the rest of their group. I took a deep breath and carried on walking.

‘Hello, hello,’ they yelled. I turned around to see them smiling at me. ‘Welcome,’ one cried.

I smiled for the first time that day. 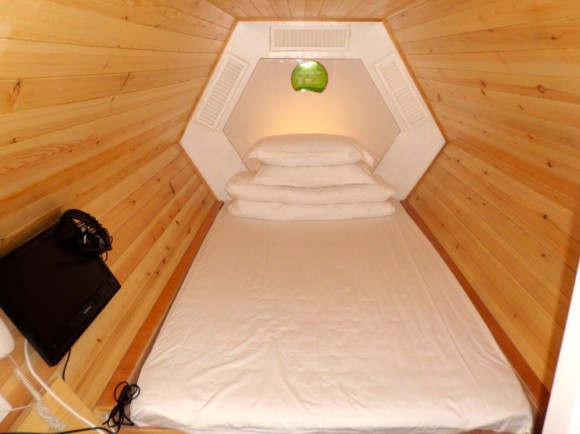 Jiang Tai Art Hotel in Beijing has got to be the coolest hotel I have ever stayed in.

Upon my arrival into the ruby red reception area with white fake icicles dangling from the ceiling, I was asked:

‘Would you like to see your room?’ as I checked in. Thinking it was a bit odd, I said no. Upon further inspection, I probably should have said yes.

Apparently, the cheap room I had booked for £15 a night wasn’t actually a room but more of a pod. Imagine a sauna with a double bed touching both sides – that was basically it.

Stacked in a row were several of these wooden log cabins. There was no window and no bathroom but there was my very own locker packed full of goodies. And inside were lots of little presents waiting for me – my own cup and green tea (hot water was in the shared chrome bathroom), 3 different size towels, shampoo, soap, a toothbrush, slippers and even some free flowery pyjamas!

It made the cabin fever bearable! Staying in a pod is a great novelty. 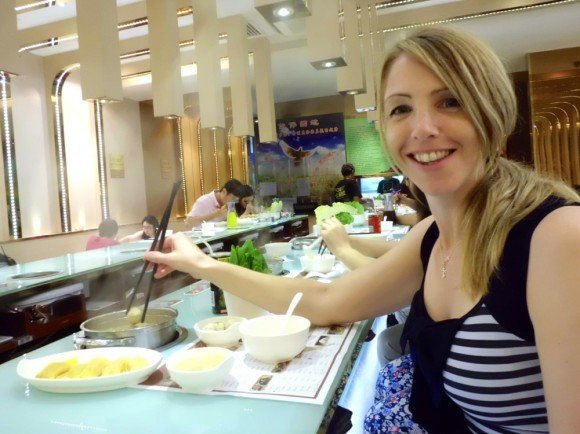 The art of chopsticks

Who Needs a Fork

I have astounded myself with my use of chopsticks. Although I may only be eating three grains of rice at one time –

I am nearly as good as the locals!

Now I know why they hold their bowls so close to their face when they eat their noodles – and I thought spaghetti bolognaise was messy! (Apparently the slurping is to get a better taste down their palate).

I’ve eaten soup for breakfast, tried a traditional hot pot, have enjoyed the sensation of numb peppers (which make the side of your mouth go numb and constorts your whole face), and made my own dumplings. The chinese meat here is so tender.

As adventorous as I am though, I don’t think i’ll ever be ready to try the traditional snake or dog meat (yes – they do actually eat alsatians!) 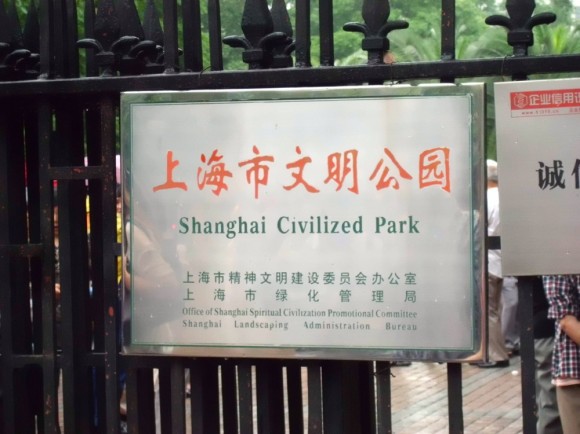 ‘Looking for a husband?' a voice asked. I turned around to see a young Chinese man smiling at me.

‘Not really' I replied, (thinking that one was enough).

‘Then maybe you shouldn't be here.'

I was confused. This was a park in the centre of Shanghai full of people, a park where you could just wander in and look at the trees – a park!

Apparently, I had stumbled across a ‘dating park.'

Only on weekends, this park opens up to parents who come and register the details of their sons or daughters for prospective future partners. Pinned under each tree were pictures of singletons along with what I guessed were their statistics.

During the week this place was just a park but today, the day that I had decided to visit this park – it was not the place I should really be (unless I wanted a Chinese husband of course!) 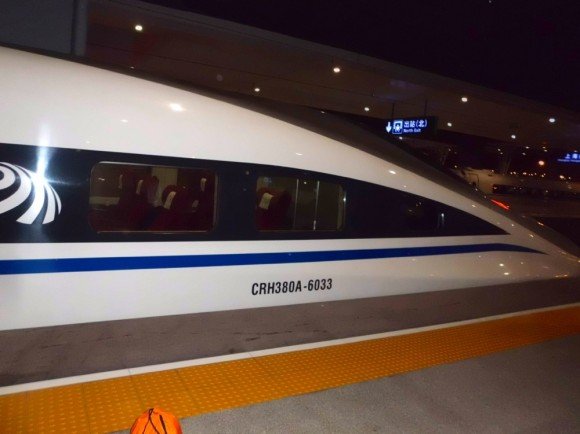 Places To Visit in Shanghai

After a five hour journey from Beijing on the bullet train which got up to a speed of 306km/hr, I have arrived in Shanghai.

Did you know that Shanghai is nearly five times bigger than New York?

This city is amazing, full of skyscrapers and plenty of things to see and do.

Here are my top tips: 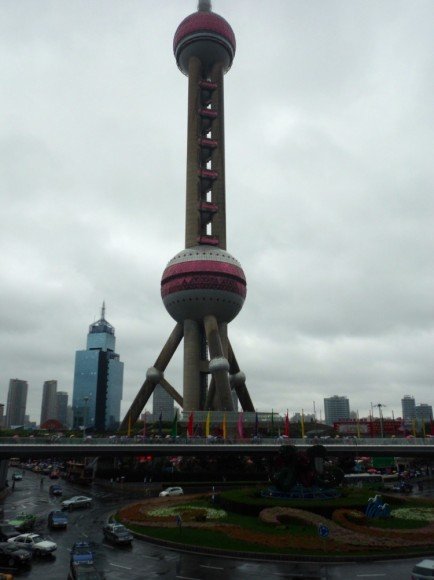 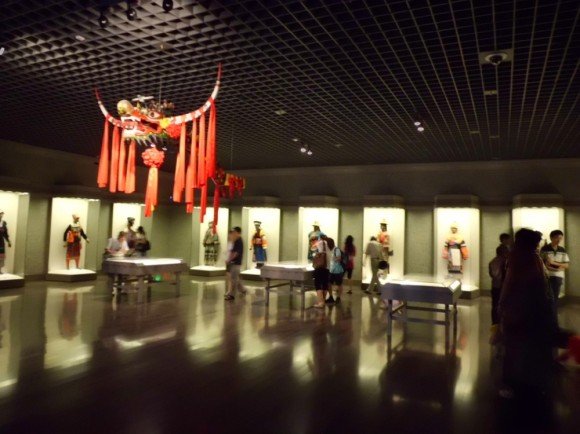 The traditional costume exhibition at the Shanghai Museum

4. Jin Mao Tower – not recommended for those with vertigo but amazing views of the city 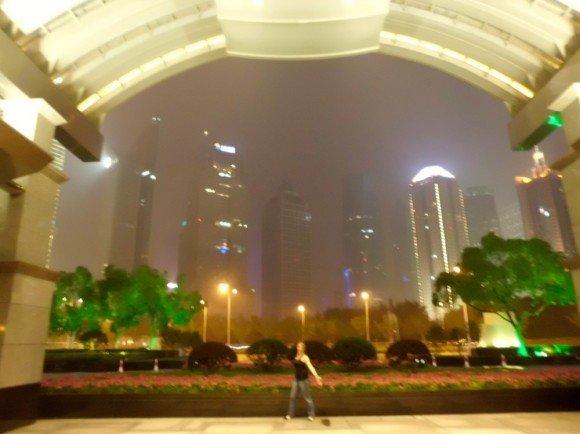 The skyline of Pudong

5. East Nanjing Road – a shoppers paradise with every store you can imagine and goes on for ages
6. The Bund/Riverfront – walk along the river and check out the old French buildings 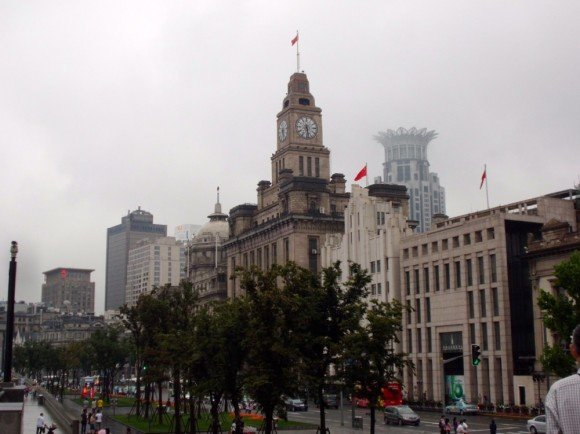 7. Xintiandi – a beautiful lake and oasis in the middle of the city

n.b Shanghai are actually building the world's next tallest building that will be bigger than the Burj Khalifa in Dubai! 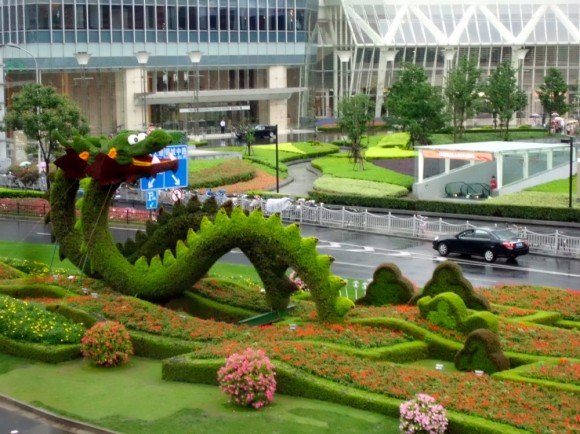 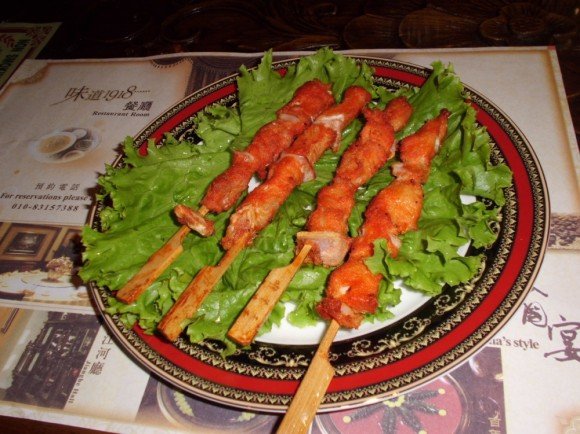 Lessons From Travelling in China

1. There are no such things as taxi ranks in China – crossing several roads and waving at empty taxis for twenty minutes will not guarantee you a cab. Be prepared to be patient and always take a card with the name of the hotel on (preferably in Mandarin as they don't speak English).

2. Always ensure the price is clear before you take a rickshaw. When you think the driver means 30 Yuen, he actually means 300 Yuen (27 pounds more than originally stated) and once you've arrived at your destination there is no pleading with him. 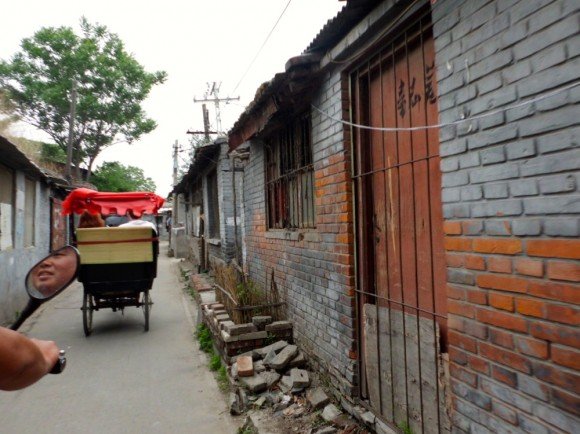 Rickshaw ride through a Hutong

4. Don't get caught out – always carry tissue paper and trousers that you can roll up. The squat toilets are great for building up those thigh muscles! Be prepared to sacrifice your privacy in the authentic toilets (can be found at Xi'an train station). 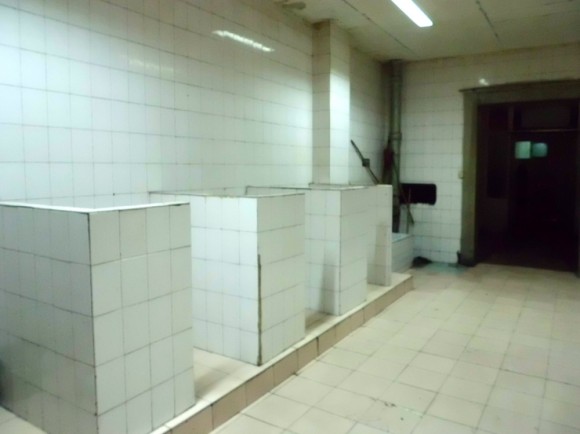 Yes – I actually took a picture of the Chinese toilets!

5. Even in quiet, remote villages, ear plugs are an absolute essential as the Chinese love their karaoke (plus they talk very loudly). 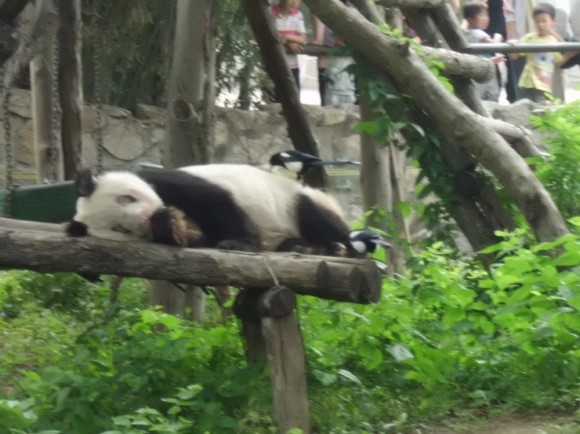 It's Not All Bad

Okay, so I may have given the impression that I don't like China. Just because the Government officials send me the wrong way when I ask for directions, Facebook is blocked and everyone stares at me, doesn't make it a bad place. There's actually some great things about China:

1. Beijing Zoo – Where else can you see a panda bear? It's worth the visit just for that (and the wolf).

2. Beijing Acrobats – If you want to know how many people you can fit standing on a bicycle then this is the place for you. Edge of your seat, jaw droppingly spectacular!

3. The Legend of Kung Fu – A great story, karate chopping, fighting scenes and flying monks and it's in English. 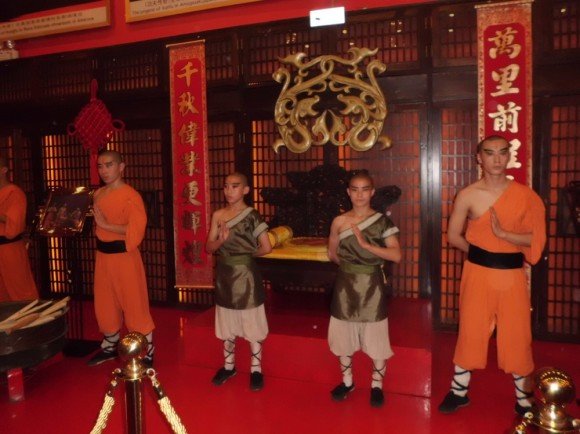 Legend of the Kung Fu

4. Summer Palace – only one phrase can sum up this amazing place: serenity at its best. Hours of peace and quiet away from the bustle of the city with a gorgeous lake and stunning views. (Plus: great for Tai Chi spotting). 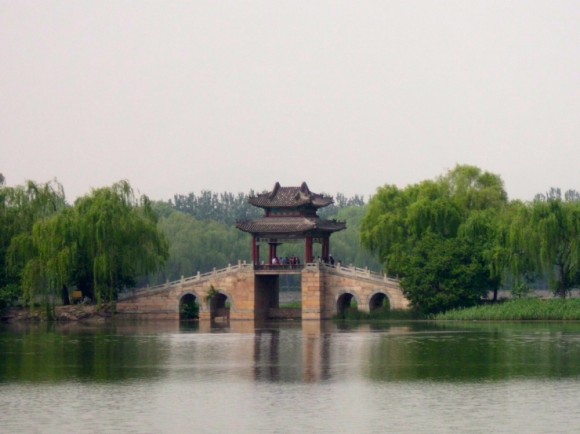 5. Pearl Market – An indoor market in a huge department store with everything you'll ever need. From cuddly pandas to fur coats, and because it's all ‘Made in China‘ it's cheap, cheap, cheap.

6. Tiananmen Square – Home of Mao's Mausoleum but more famous for the massacre in 1989 where hundreds of protesters were killed by the Chinese Army. 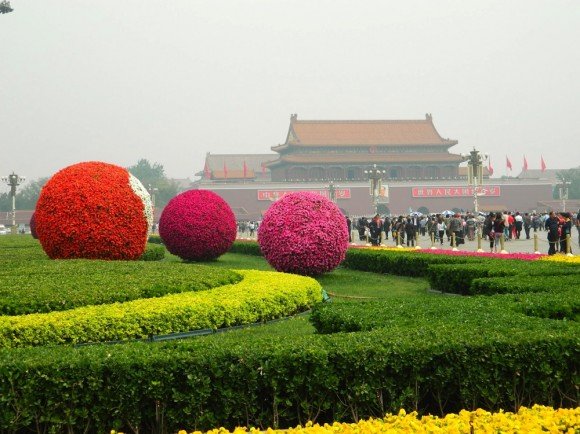 7. Forbidden Palace – A cluster of ancient buildings once home to 23 Ming and Qing Emperors and their many concubines (mistresses).

8. And of the course: The Great Wall – What more can I say? Accessible on day trips if you don't fancy trekking it. 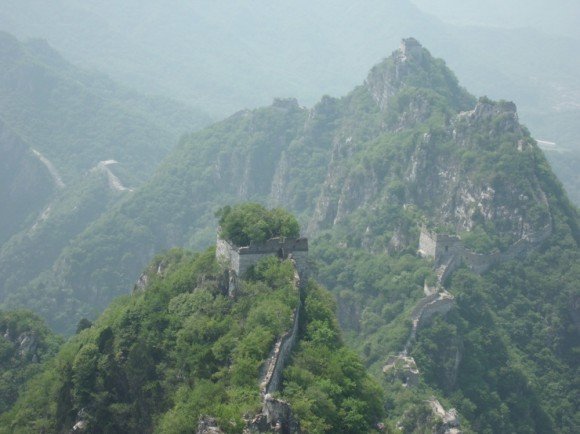 My Best Parts of China

1. Watching two pedalos having a water fight at the Summer Palace

2. Our local guide on the Wall showing me pictures of his family then taking my photo for his collection

5. Being greeted by ‘Hello Lisa, you're back,' by the hotel porter upon my return to the Redwall Hotel.

6. An old man taking pity on me and helping me find my way to the nearest McDonalds, escorting me there.