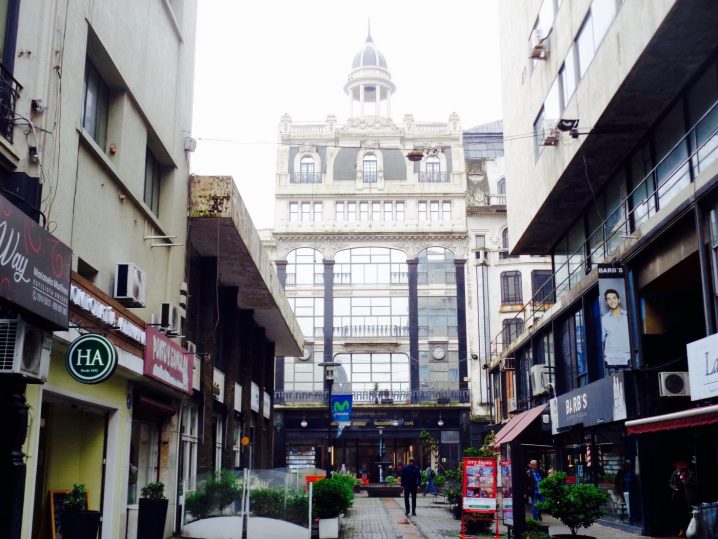 “You gain 5 minutes of life when you go inside the old town,” claimed our hilarious guide as we stood at the piece of free-standing wall that marked the divide between the old and the new, I decided to follow the others and venture inside. After all, an extra 5 minutes of living was going to come in very handy.

Uruguay doesn’t seem to have that Latin flair that other countries in South America have. It feels as though it’s a European country which has drifted across to the wrong continent. But…it does have similarities with Argentina. It shares the same love of Tango, and the locals drink ‘mate’ (although more in the streets here than in Argentina). Even the statue in Salvador Square looks as though he has this caffeine infused herbal drink in his hand.

They speak Spanish and have the same “sh” sound for the ‘ll’ (which completely confuses me). The guys even seem to have the same style and beards as those in Argentina but something which isn’t similar is the cost.

Being used to Colombia I was overspending on my budget as I travelled around but I was completely unprepared for the cost here. It is by far the most expensive country in South America with a main meal costing £10 (US $13) so be prepared if you come here.

They even have the same building as in Buenos Aires (although they say that they had it first). Is there rivalry between the two countries? It appears so.

With only three days to spare, I was determined to find out more about this quirky capital. Cue walking tour… 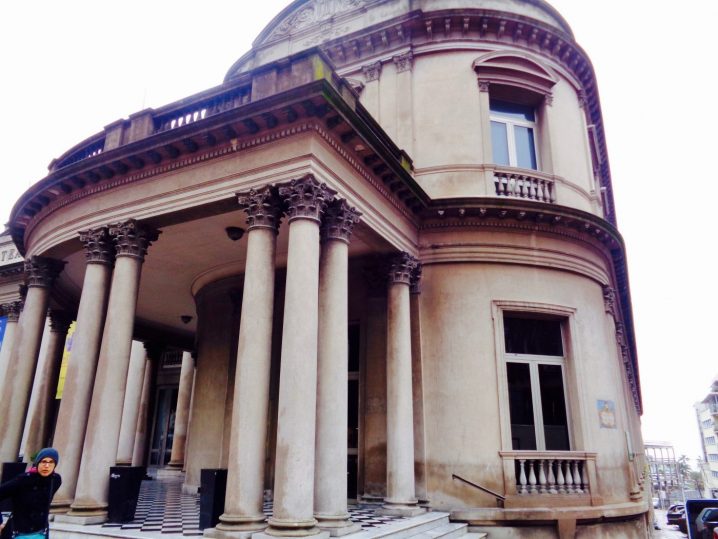 Montevideo was founded in 1726. The first residents sailed from the Canary Islands to begin populating the city. Nowadays more than a third of the country’s population choose Montevideo, the capital as their home.

The country became an independent state in 1828. Thirty three palm trees stand tall in Plaza Independence (Spanish for Independence Square) commemorating the 33 patriots who fought for the country’s independence.

The city is a mix of the old and the new. Independence square divides the old square and new part of the city. Standing here they say that you can look to the future and look back to the past.

It’s here in Plaza Independencia that their most impressive building stands. The Palacio Salvo is 100m tall and looks very similar to the one that I had just seen in Buenos Aires. Both designed with a lighthouse look on top of a building. Apparently it was designed by Mario Palanti, an Italian architect who used a similar design to the Palacio Barolo in Argentina. You can pay to go inside to admire the view from the 25th floor. 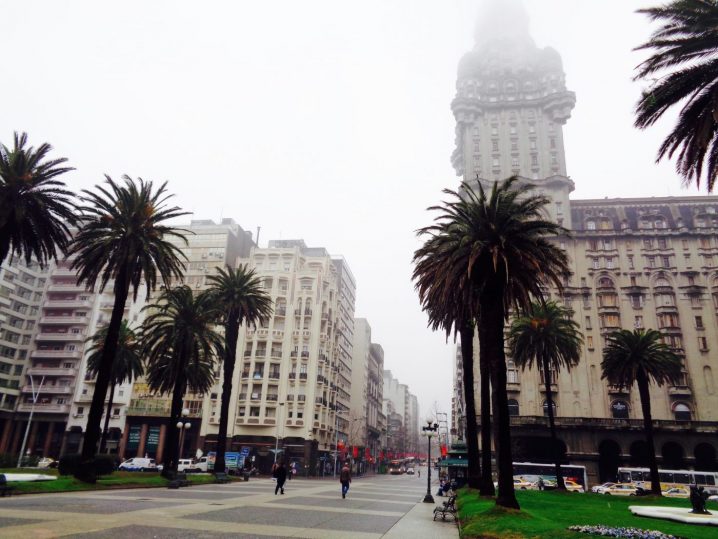 We walked past the building where the president works. The “world’s most humble president” Jose Mujica stepped down in 2015 and now Tabaré Vázquez is Uruguay’s president. Mujica was known for living on a farm, driving a 1987 VW Beetle, and donating 90% of his salary to charity. If you’ve never heard of him you should definitely look him up. Other politicians should take a leaf out of his book.

From the newer part of the city we ventured through a free-standing piece of wall into the old city. Legend says that “you gain 5 minutes of life when you go inside the town.” What did I have to lose! Entrance into the old town was once restricted as the doors used to close at 8pm. There was no going in after that time. The old town isn’t that spectacular (visit Croatia for amazing old towns) but it does come with its quirkiness and tales. 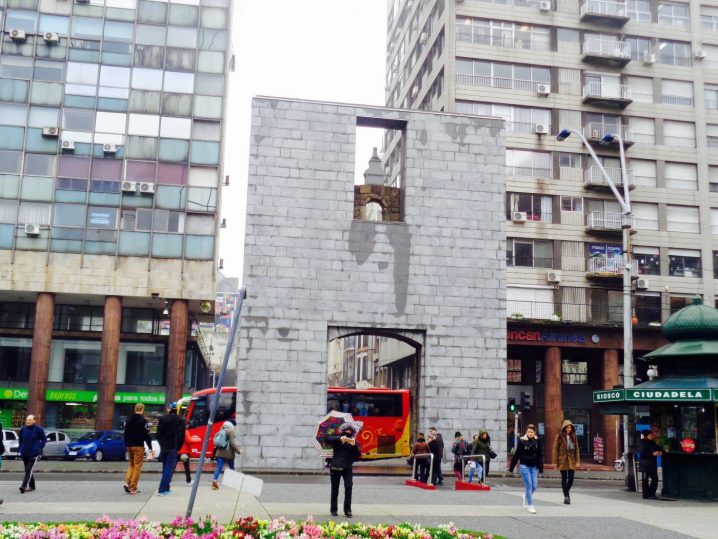 The Uruguayan walk of fame being one. Famous people from writers, football players and actors adorn this boulevard (or pavement) Nelson Mandela even has his own slice of the action, marked by a golden sun. Even the Rolling Stones came here to play a concert and appear within their walk of fame. 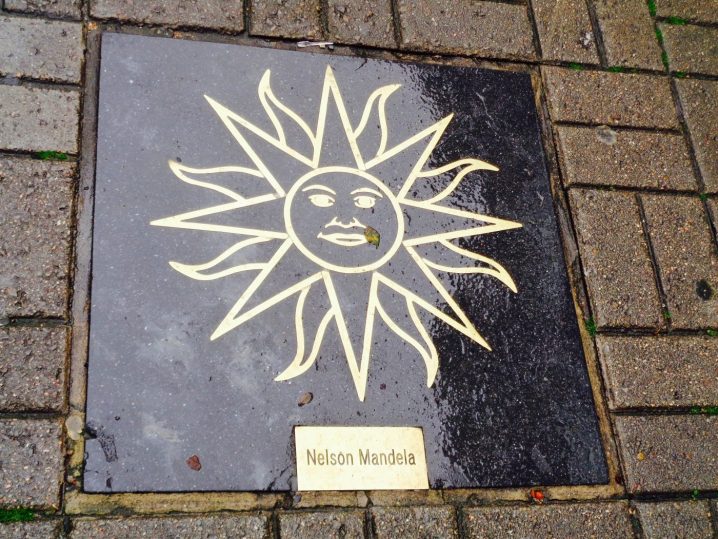 The Teatro Solis is an impressive building in a romantic Italian-style. But the story behind it is nowhere near romantic. Legend has it (yes another one) than this theatre was named after a Spanish sailor who was killed and brutally eaten. This story is even taught in schools!

The red light on top isn’t for what you might expect. Instead it indicates when a performance is about to start. Inside is a coffee shop and a restaurant and at 4pm on Wednesdays you’ll find private tours on offer here. 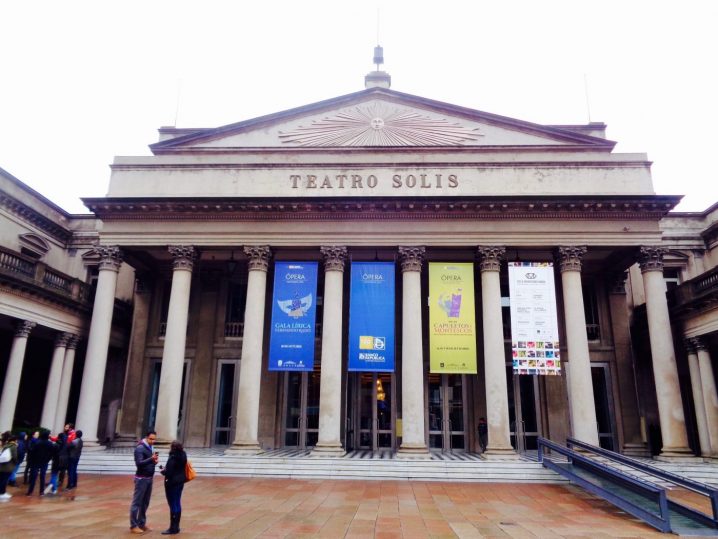 As we continue the tour, more mysteries seem to arise. It seems Uruguay has its own version of our Banksy but instead of stunning graffiti appearing in the city, strange mosaics are popping up instead.

And then… there’s the promenade. Twenty-eight metres of it. This is where the joggers and skaters come out between 4-6pm as it starts to get crowded. You can walk from the east (where there are green parks and squares) to the west along the promenade which stretches along the Rio de la Plata, the widest estuary in the world. 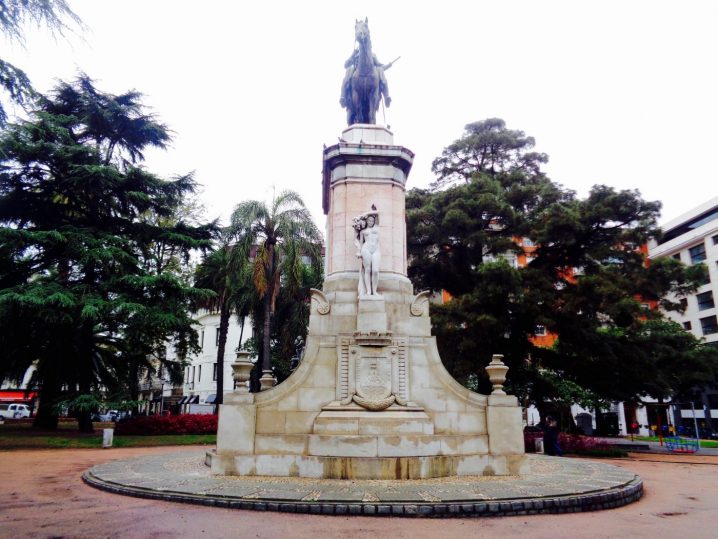 We walk past a fountain which was once the only place to obtain drinking water, and an Anglican church to the market which looks more like a train station. This market used to be where the passengers on ships coming in would buy their fruit and veg from. Nowadays inside it is full of different restaurants with a very cool Harry Potter clock that adorns its wall. 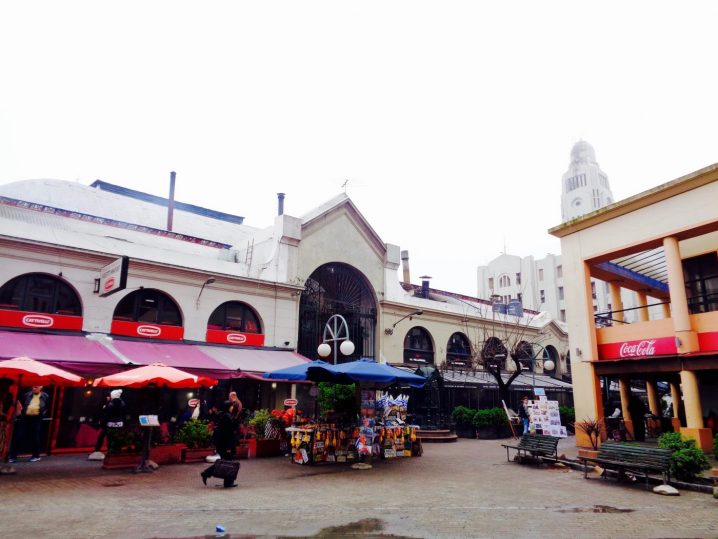 Taking a pit stop for a Medi Medio (a drink which consists of 1/2 wine, 1/2 champagne and is apparently exclusive to Uruguay), we were then shown where we could buy a dulce leche empanada before looking around at the meat restaurants that Uruguay is also known for. A big tip here is that the restaurants inside the market are more cost effective than those outside and if you pay with your credit card you get 20% off restaurants and bars!

What I really like about this city is the quirkiness, the fact that they don’t take themselves too seriously and that they are proud of their country. Yes, they may be similar to Argentina, but Uruguay is truly in a league of its own.

Is the boat journey from Argentina worth it for those extra five minutes added to your life? Most definitely! 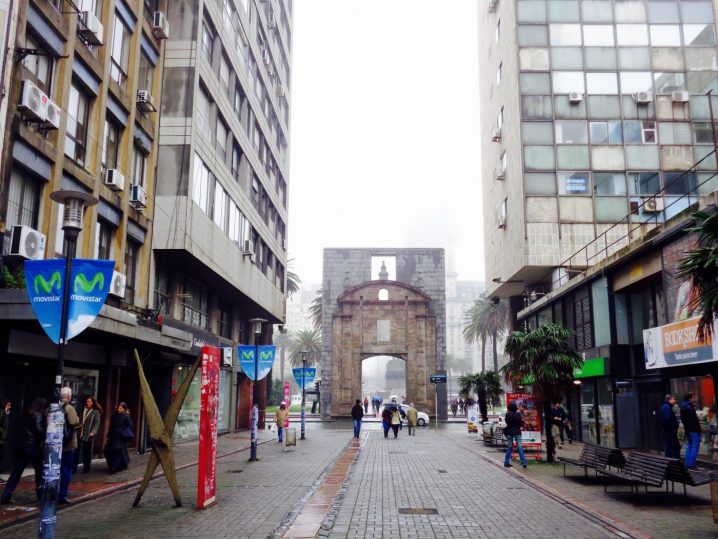 How to get to Montevideo

I took the boat from Buenos Aires to Colonia then the bus from here to Montevideo. The boat left Buenos Aires at 8.15am for Colonia and cost £30.00 with Buquebus. There are also boats directly from BA to Montevideo which cost more as the journey is longer. I then took the bus from Colonia which took 3.5 hours and cost 335 Pesos (£9 / $11). Buses leave at least once an hour from the bus station in Colonia. 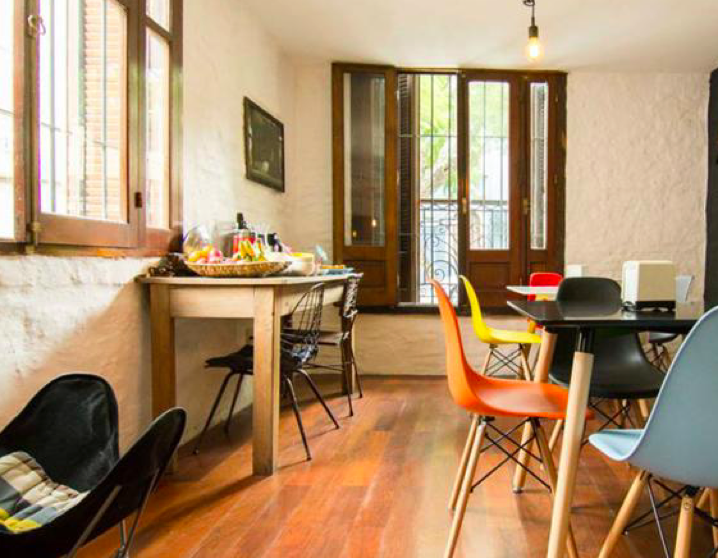 I stayed at MedioMundo which was a cool little hostel. It’s a couple of streets from a bus stop so it’s easy to get to places from there. I stayed here for 3 nights in the winter and they had a fireplace and cosy duvets. There is also a mini supermarket nearby which sells hot food.

Is Montevideo good for solos? Yes. It’s quirky, safe and very cool. I definitely recommend taking the walking tour to see the best of the capital and to learn more about the history of this country. There is a good shopping mall too. I also visited Colonia which is good for solos.