‘Don't look it in the eye' my mind was saying. But I was mesmerised by the beauty of the biggest chocolate brown eyes I had ever seen.

I knew I should look away but I was transfixed; rooted to the spot by the enormity of its reindeer-like antlers towering about its head.

It blinked and the spell was broken.

I swung my head around to look at the others, all staring at me with their mouths open in shock. Then it ran, galloping off past the swimming pool where I had been happily laying, blissfully listening to my Ipod when I had heard one of my group shout ‘LISA'. Then I had seen it – a giant Onyx galloping (if they do gallop – or maybe just run?) through the bushes until it stopped dead in its tracks at the swimming pool and chose me to linger its spell on. 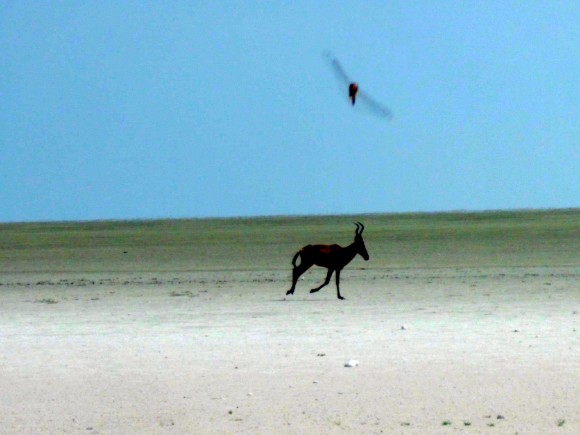 not an Onyx but a galloping Kudu instead

I had found out later that it was a sick Onyx and known to charge the quests (and I'm not talking about money either). Maybe it had known my guilty secret, that I had sampled its close cousin the day before, drenched in a creamy mushroom sauce; it had been the juicy steak I had ever tasted. Either way, it was the most surreal moment I have had in Africa so far…