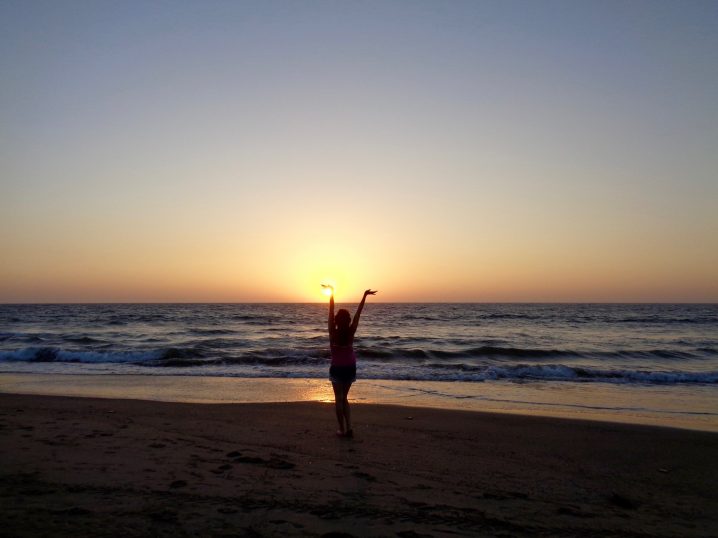 I had left Ecuador and after spending my last stop at Vilcabamba – the Valley of Longevity, I had jumped on a night bus with my new partner in crime. We were due to spend the next two weeks together travelling down through Peru and visiting social impact projects on the way.

I had been lucky enough to have visited Peru before, and had explored the majestic Inca sights. I had seen the best of the country on an overland tour with G Adventures (who I definitley recommend). This time I was taking a different route – the coastal one.

Having heard how great the Peruvian night buses were, I was about to find out having scheduled 3 night buses to take me all the way from Mancora down to Arequipa (the White City) in the south of Peru.

My first stop on my Peruvian itinerary was Mancora, via a very dark border crossing from Ecuador at an ungodly hour of 3am in the morning. Then it was back on the bus to be woken up by a gorgeous sunrise before arriving in Piura, the oldest Spanish city in South America, where we needed to change direction for the beach. Buses run from here to Mancora quite frequently so within 30 minutes we found ourselves on the 3 hour less comfortable bus ride heading along a desert road to the Peruvian coast.

Mancora is a small Peruvian beach resort with only 10,000 residents. As well as Latinos it draws surfers and beach lovers who love nothing more than partying on the beach, and watching the sunset over the ocean. We were staying at the Misfit Hostel, a hostel catering to the travelling misfits, situated bang smack on the beach.

Being a favourite with Ecuadorians and Peruvians, I had visions of a developed town lined with beach front hotels and posh restaurants but instead I felt as though I was in Thailand as we were whisked from the bus station in a colourful tuk tuk heading to a more remote part of town. 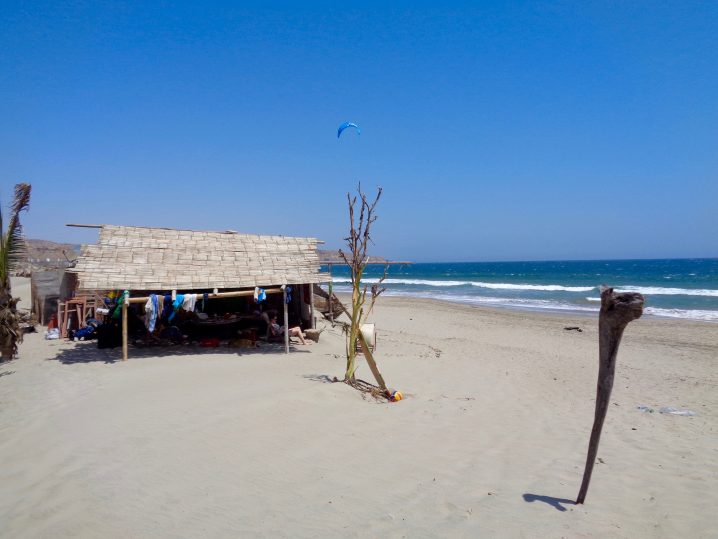 The beach shack at Misfit Hostel

Following a sign for “Misfit”, we continued on foot across sand with our backpacks and luggage in tow. A rustic wooden shack stood by the sea. People were sitting on make-shift chairs made out of tree stumps and I spotted others laying on the sand.

Was this really Peru? It seemed a world away from the green majestic mountains of Machu Pichu, the tranquility of the Sacred Valley, and the Inca village of Ollantaytambo.

Instead I was standing in front of a beach shack with nothing Inca in sight. But after being on a night bus the only thing I wanted to do was take a shower.

“The showers are seawater showers,” we were told as we checked in.

Disappointed, we agreed to just stay for one night and I took the opportunity to sunbathe, and try my hand at tightrope walking before setting off for a stroll along the beach as the sunset to check out this Peruvian beach town. 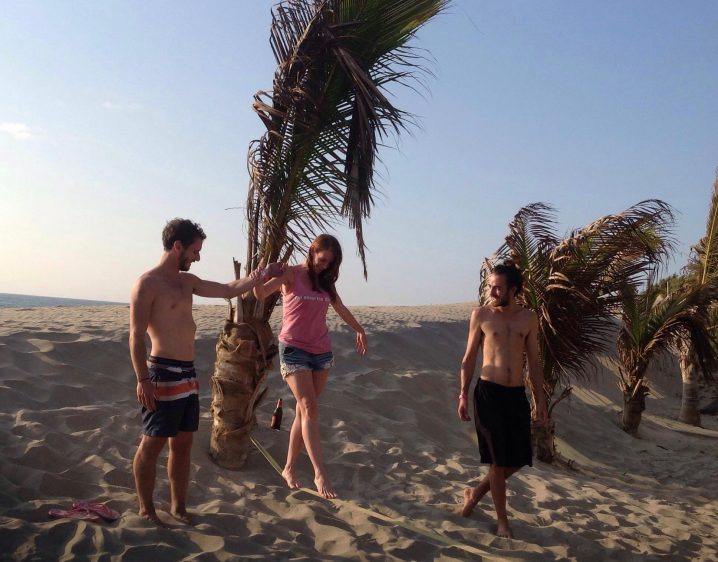 Trying my hand at tightrope walking

Told not to head right (to reduce the chance of being robbed), we headed left along the sandy stretch of beach instead. Heading towards Agenda Piura, the main street, and the area where everything was at. As we walked the beach hotels made themselves known and the area became more developed with each step. Here were the nice hotels, the posh restaurants, the souvenir shops and small convenience shops in their droves.

Bars were starting to blast out music fit for a Latino super club and the neon lights shined bright, signalling that the evening had began. As day changed into night, so it appeared did the residents, and we stuck close to the main touristy areas to avoid any dodgy-looking locals.

The scent of barbecued fish filled the air, as a handful of restaurants all competed to lure in the tourists, each offering the Peruvian classic ceviche. Again I was reminded of Thailand with fresh fish, langoustines, and octopus in glass counters waiting to be picked and cooked for supper. 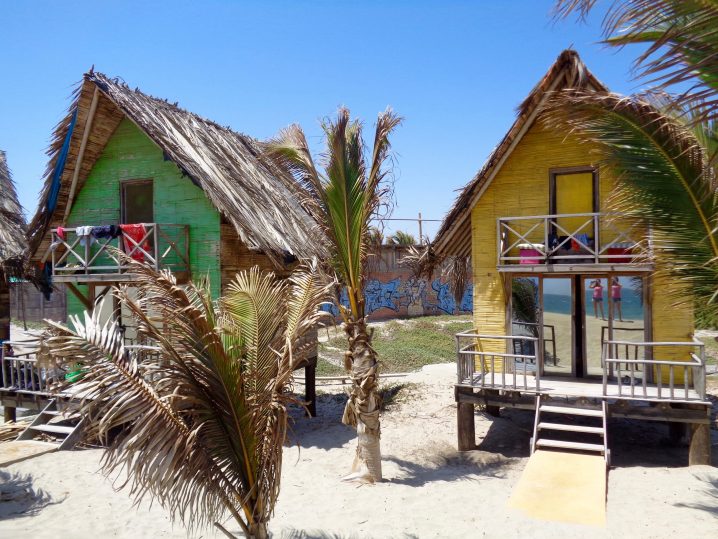 The ‘dorm rooms' at Hostel Misfit

Sellers flocked to the beach and we sat and enjoyed a local beer for Happy Hour. There was no need to go to the souvenir shops as everything we could have needed came to us – sarongs, sunglasses – flip flops. A never-ending display of beach-ready goods.

As we hopped on another tuk tuk back to our wooden hut on the beach, I still couldn’t get my head around the fact that I was in Peru.

That night I slept with the sound of the waves lapping near my door. It was absolute bliss (until I needed to take a shower again the next day) but the view and the position of the hostel soon made me overlook the lack of real water in the shower.

My confusion about being in Peru was made even greater the following day when we checked in across the road to another hostel called Psygon Surf Camp. Not a very Peruvian name and more synonymous with Saigon in Vietnam. Made even more Asian with the offer of Muay Thai classes (Thai kickboxing), I made the most of a very cheap £2 class and kicked and punched my heart out amongst the pumped up regulars. 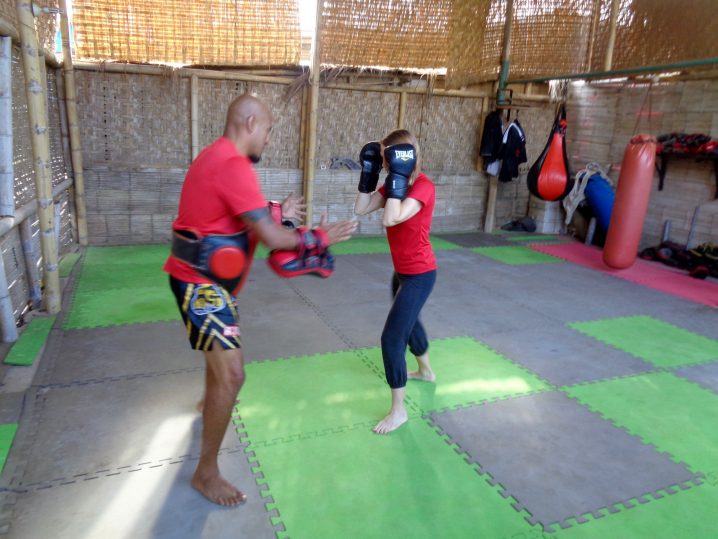 Learning Muay Thai with the expert at Psygon

With only two nights here, it was time to leave this Peruvian resort. And as I sat waiting for night bus number 2, my body still reeling from the upper kicks, I had to remind myself where I was.

With Thai kickboxing, a golden sandy beach and colourful tuk tuks, I wasn’t in Thailand… I was in Peru.

Where to Stay in Mancora

I stayed at Misfit Hostel for the first night then switched to Psygon Surf Camp for the second. Psygon has a restaurant and bar (and real showers) and was a bit cheaper at $7.50 a night for an 8-bed dorm.

It was good to stay in both to compare and Misfit was definitely more sociable and easier to meet the other travellers staying here. If you can put up with seawater showers I definitely recommend this one as it’s directly on the beach (I paid $8 for a bed in a dorm). 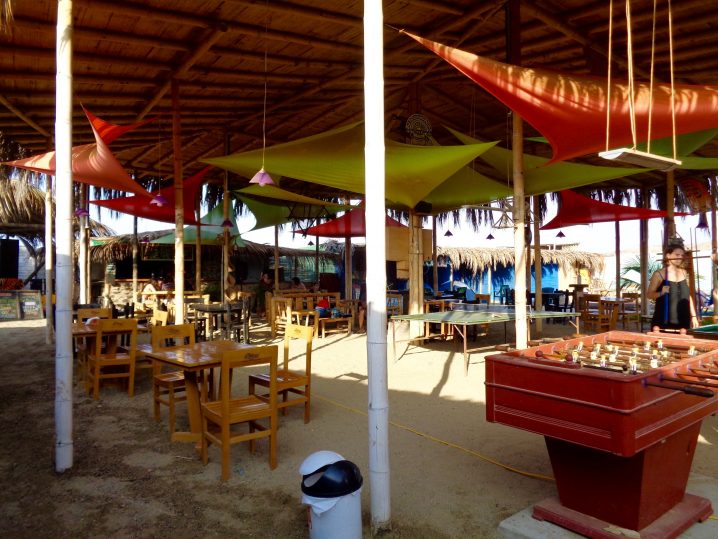 How to Get to Mancora

I travelled to Mancora on a night bus from Loja with Loja Internacional. The bus left at 11pm and stopped at the Ecuador/Peru border really early in the morning. We then changed at Piura to another bus terminal and took a bus at 8.30am (only 30 minutes after we arrived). The international bus cost US $14 to Piura, then 15 Soles to Mancora which was another 3 hours. 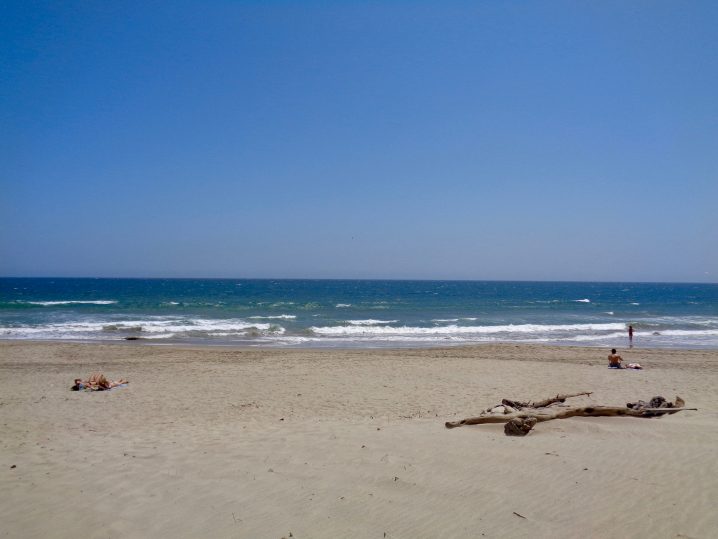 How good is Mancora for solos? I personally found Mancora a little sketchy and am glad that I had company for this town in the evenings. You can meet others if you stay at Misfit who hang out at the hostel at night and have barbecues and bonfires at the beach. If you do go here solo stick to the left-hand side of the beach and be careful at night.

If you're thinking of travelling solo to Peru, check out our solo destination guide.

N.b. Some of these links are affiliate links. If you choose to book through these, they are of no extra charge to you and you'll be helping to support Girl about the Globe. Plus we give 10% of all profits to charities we believe in such as War Child, and Save The Children. Thanks x

2 thoughts on “Mancora, the Peruvian Coast”