Types of Girl about the Globe – Language GatG, Cultural GatG

If you're planning a trip to Colombia and are wondering ‘what language do they speak in Colombia?' Colombians speak Spanish, and Colombians have one of the clearest Spanish accents making it a great country to visit if you want to learn Spanish. If you’re unsure of how to learn Colombia Spanish, this article will help. 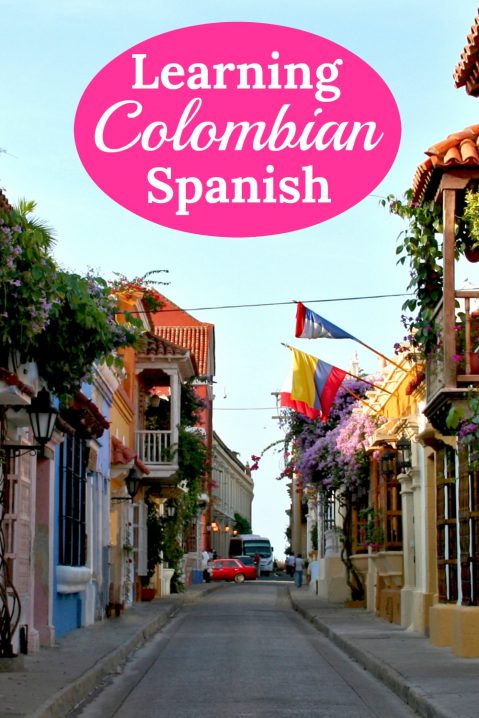 Is Colombian Spanish different? Yes, especially to Spanish spoken within Spain. The Colombia language and accent is clearer and more pronounced. Even though I had a good understanding of Spanish when I moved to Spain, it took me weeks to understand their accent because the Spanish accent has more of a ‘lisp’ sound on certain letters.

And even Colombian Spanish vs Mexican Spanish. Where some of the Colombian Spanish words have a completely different meaning in Mexico. Take Carro and Coche for example which both mean car depending on which of these countries you are in. Learning Colombian Spanish will give you a better understanding of the Spanish spoken in both Central and South America, and you will soon adapt if you travel to Europe too. 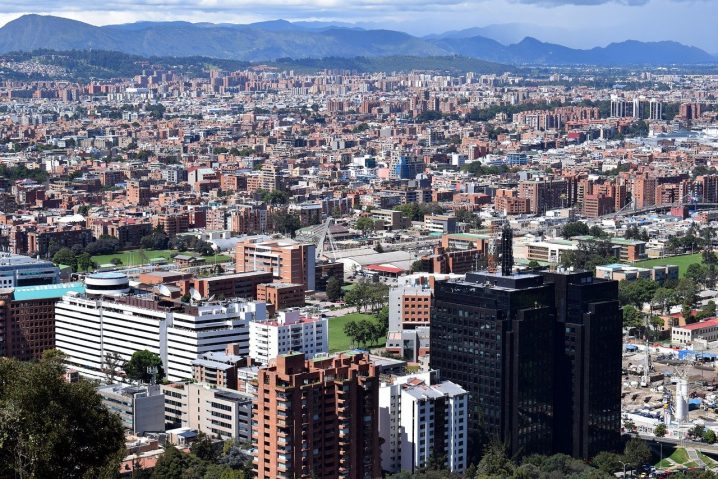 Learn Spanish in Bogota, the capital city of Colombia

There are many places to learn Spanish in Colombia depending on whether you prefer to learn Spanish in Bogota or study in Medellin known as the ‘City of Eternal Spring.’ Language schools offer normal and intensive classes to get you started and help you to improve your Castellano.

If you are staying in the capital, you can learn Bogota Spanish at a Bogota Spanish school such as Whee Institute, Spanish World Institute or Learn More Than Spanish amongst several others. Most schools offer weekly lessons from one to three weeks or four weeks or more.

You can either just pay for the classes or pay extra for one of their homestays where the school pairs you with a local host so you get to practice your Spanish outside of the classroom too! Expect to pay at least COP 470.000 (£90 / $125 USD) a week for 15 hours of class.

Some Spanish language schools in Colombia not only offer language lessons but also include a programme of social and cultural activities.

As well as intensive Spanish with 20 hours a week at International House Bogota, you can also learn how to dance like Colombians with their Spanish & Latin dance classes, volunteer in the local community for 3 or 4 hours a week or spend a 5-day eco-adventure in the Amazon rainforest. 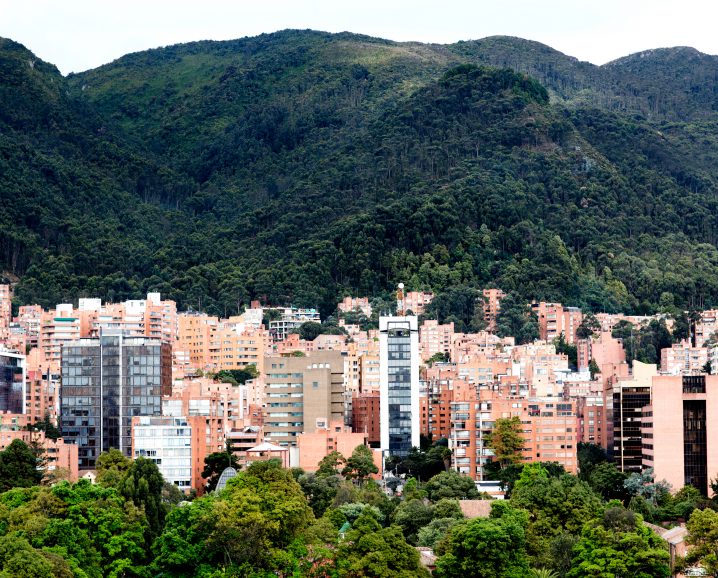 Medellin, ‘The City of Eternal Spring'

There are several Spanish schools in Colombia but with Medellin Spanish being one of the clearest accents, you may prefer to choose a Spanish school Medellin to study at. Learning Spanish in Colombia is definitely an experience and if you want to do it in an area with bars, restaurants and sociable hostels on your doorstep then El Poblado in Medellin is the place to study. Not only is it one of the most well-known areas to stay in but there are several schools where you can learn Spanish Medellin style.

Toucan Spanish School is a popular choice. Here you can take private classes from 5 hours to 20 hours starting from COP 350,000 (£68 / $95 USD) or join the group classes for 600,000 (£115 / $161 USD) a week for 20 hours of lessons. Classes are from beginner to upper-intermediate and they offer regular activities such as salsa classes and tours of this amazing city.

Blink Spanish is more of a hostel where you can stay, study and eat for one price. All of your classes, accommodation, activities and meals are included for $200 USD a week so all you need to do is just turn up!

Some schools also offer business Spanish or one-on-one tutoring in a private Spanish class. Whatever way of learning you prefer whether a full immersion with a homestay, staying in a hostel with others or choosing your own accommodation and just attending classes for a few hours a week, you’ll find a Spanish school in Colombia to match your needs.

It’s a course for learning conversational Spanish for Colombia which teaches you how to speak Colombian Spanish like the locals. Learning online will help you get the most out of your time in Colombia so you can spend your time sightseeing instead of attending classes when you’re there.

And the best thing about it is, it’s taught by someone who learnt the language himself after years of being in Colombia so he’s easy to relate to. 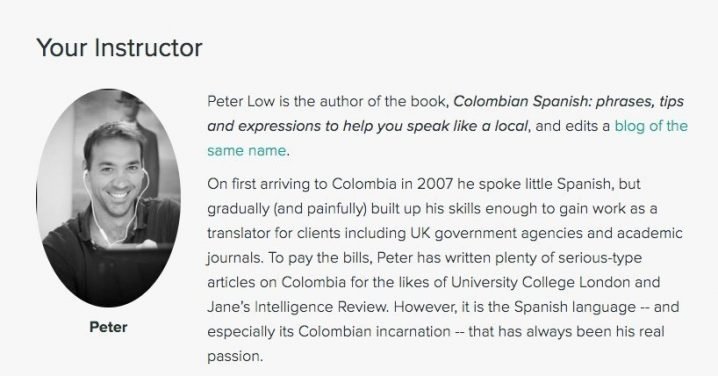 Colombian Spanish believes that we should look beyond our Spanish textbook and Peter’s friendly approach to learning Spanish really helps you to relax with the language and immerse in it more. To learn Colombian Spanish is one of the easiest to learn in Latin America and even if you’re travelling onwards, this course gives you a good basis of the language so in no time at all you’ll be speaking Spanish like a local.

The course covers everyday Spanish from English to Colombian Spanish, including how to start a conversation, vocabulary for going out with your new Colombian friends, and culture explanations so that you’ll know exactly when to use them.

You’ll discover how to keep awkward silences at bay, funny expressions and how to make jokes in Spanish as well as vocabulary for dating new people. You'll soon be able to speak Spanish like a pro especially with the use of Colombian Spanish slang. 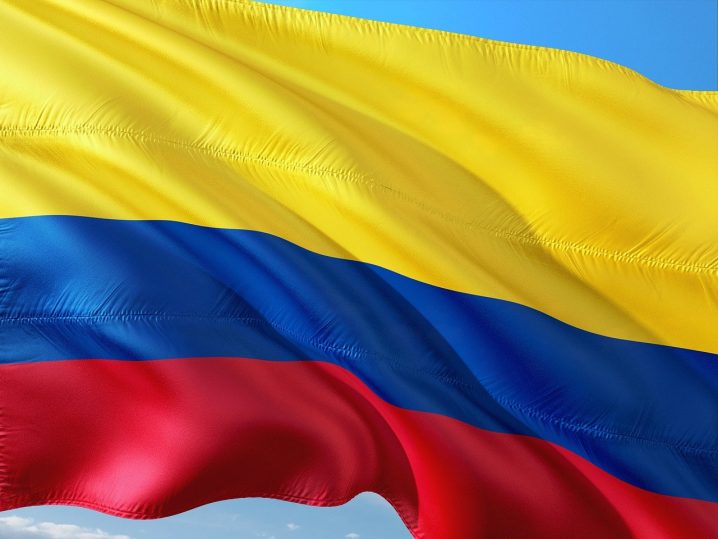 With the use of Spanish lessons online, interviews with teachers and quizzes, you can start making conversation straight away. You can go through all the Colombian Spanish lessons at your own pace and enjoy some bonuses too. It’s recommended to take the course over six weeks or choose your own schedule. By the end of the course, you’ll be able to interact confidently in your new Colombian Spanish and be ready for your trip to Colombia.

The course includes a Colombian Spanish book. This 230-page ebook is ten chapters of extensive vocabulary and explanations to help you make sense of your time in Colombia. You also receive hundreds of flashcards that will help you to remember the phrases that you’re learning. Use them online to play the games and quizzes or print them out to keep them (they even have sound effects too!)

As well as joining the exclusive Facebook community You’ll also get access to Peter, the founder of the course, who will give you feedback as you complete the course. So you’ll have help every step of the way.

* Click on the link below and enter the code “GLOBE” to receive 10% discount. * Save 10% off Colombian Spanish