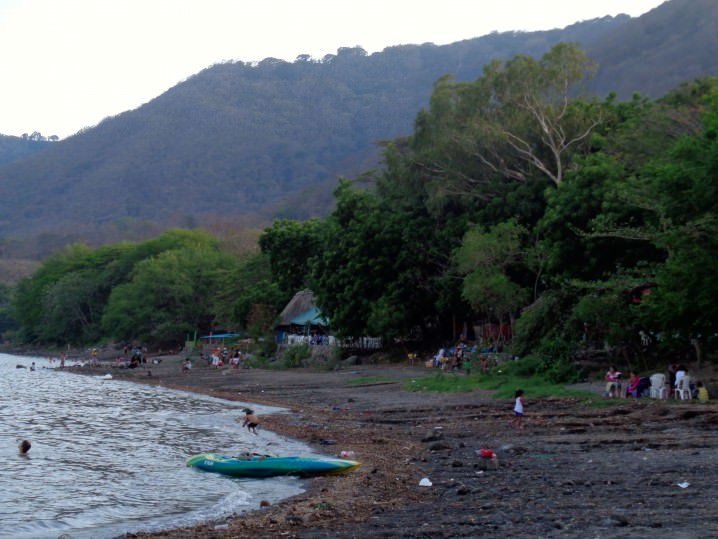 Sometimes when you rely on your instinct you allow yourself to be open to new possibilities. Having found the perfect (and very cheap) hostel in Granada, within 24 hours I had also found the perfect travelling partners and when Laguna de Apoyo came onto our radar, we found ourselves planning our first road trip.

Laguna de Apoyo is a gorgeous natural lagoon in a volcanic crater, situated near Granada in Nicaragua. Formed more than 20,000 years before by a volcanic explosion, this crater is now a sleeping volcano. Although it is not the only crater with a lagoon in Nicaragua it is definitely popular with locals who regularly pack up their cars and drive down for weekend breaks.

It is said to have the clearest fresh water in the country with a warm temperature of 27 degrees centigrade (nice for a dip!)

Armed with our backpacks, we set off on our Nicaraguan adventure.

Being so used to travelling by myself, travelling with others always felt like a breath of fresh air. There were people to continuously talk to, to make decisions with and to spend time waiting (which was one of the things that backpackers seemed to do best). Now there were three of us waiting in one of the worse bus stations I have waited in. It didn’t even resemble a bus station. If it wasn't for the occasional rickety bus (and I do mean rickety) that drove in, you wouldn’t have even thought it was a bus station. Luckily it was near one of the cheapest supermarkets that I had ever been in and after stocking up on dinner consisting of a backpackers’s staple diet – pasta, onion and tomatoes, we joined the rest of the locals lined up by the wall and waited. And waited… 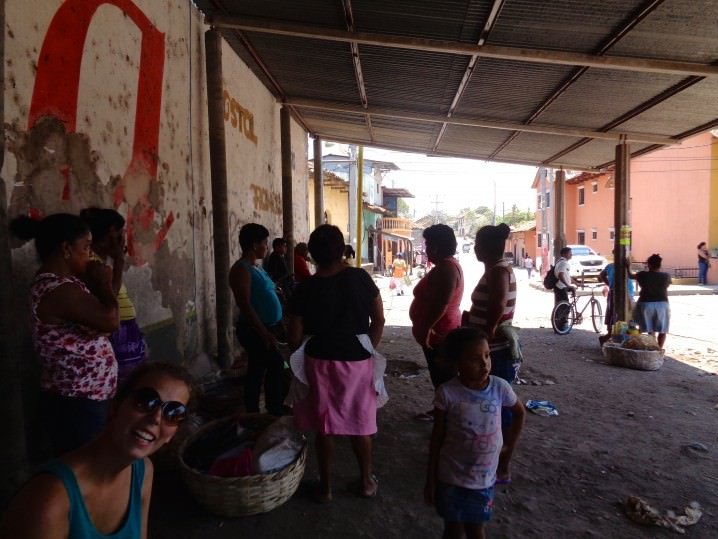 Waiting at the bus stop in Granada

When the bus finally arrived, women, children, and men who only minutes before had been quietly lined up waiting descended into a frenzy, each pushing and shoving to get on the tiny minibus. Bags were being thrown on top of the bus in what seemed to be an organised chaos. We waited until the last local boarded then clambered on squeezing our daypacks onto our laps. Sandwiched between a family of 5 who had brought along their pet parrot, the very bumpy and slow ride began.

What felt like hours later, (by this time I had warmed to the baby parrot who had sat patiently for the whole journey and not even squawked), we were dropped off at an invisible junction. As I waited for my change, the bus suddenly drove off and I was left change-less. With no signs and only two routes to take, we opted for left unprepared for how long the route would take us. 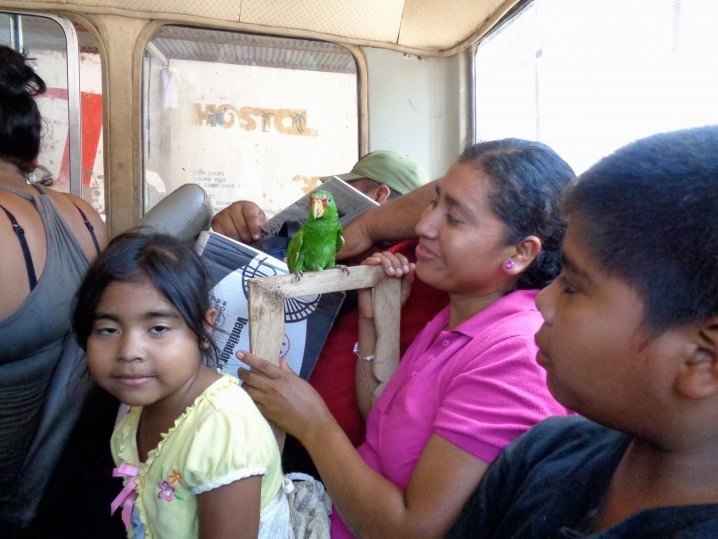 “It can’t be that far,” we had all agreed. But as we walked in the afternoon heat, it soon became clear that it was further than we thought.

Refusing to pay 140 Cordobas, we all agreed to walk. In hindsight £4.00 was a small price to pay but we soldiered on until our backs could no longer take the heat or the weight of our backpacks.

Just as we were giving up, we came across an overland truck with a rather amused-looking driver. We asked him in Spanish if he would give us a lift. Thankful that he agreed, I was hoisted up at the back on the deceiving height of the truck. Bumping our way along the dusty road we drew closer to the lake.

Thinking that it was only “down the hill” we waved goodbye to the driver as he dropped us off and began our windy descent. Thirty hot and sweaty minutes later, we admitted defeat. 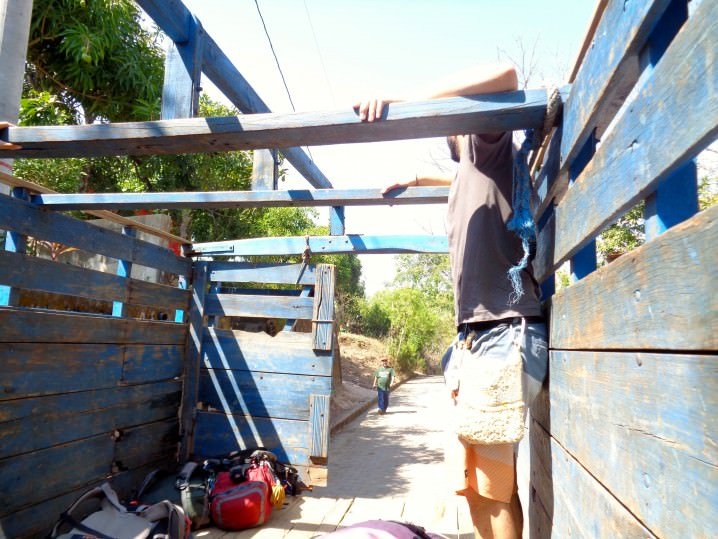 Our ‘lift' to the lake

Wishing that we had taken a taxi, we stuck our thumbs out waiting for some kind person to take us the rest of the way. Having hitchhiked in Albania, I loved the thrill of not knowing who was going to stop or if anyone would actually stop. Luckily for us, a car pulled up within minutes and we bundled our backpacks in the boot and piled in.

We were nearly there…

As the view of Laguna de Apoyo greeted us, the adventurous journey had been so worth it. 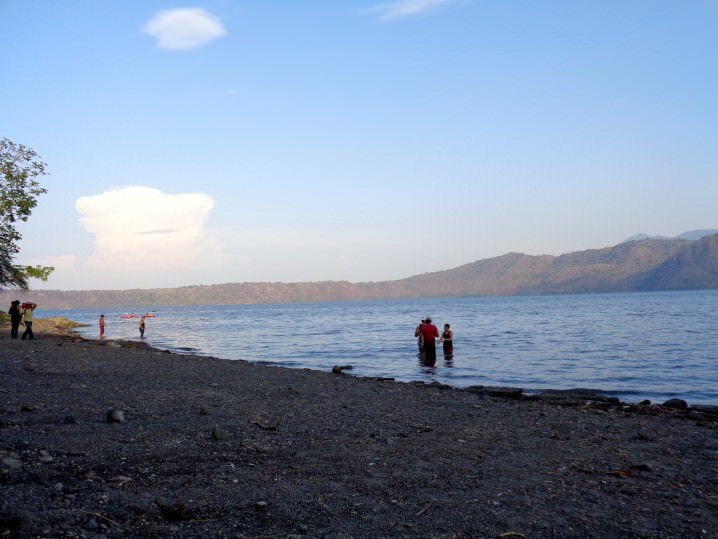 So what’s to do here?

Chill out basically. It’s not that touristy so don’t expect too much. If you’re into swimming, lounging on volcanic stones and getting a tan, then it is perfect for you. You don't even have to go far to get lunch as a local man serving ceviche comes round as you sunbathe. We stayed at Peace Project which had free kayaks to use (the water did seem a bit choppier the further out you paddle). Some parts of the lagoon are only accessible through the accommodation but there is also a public area. It’s definitely worth a visit! 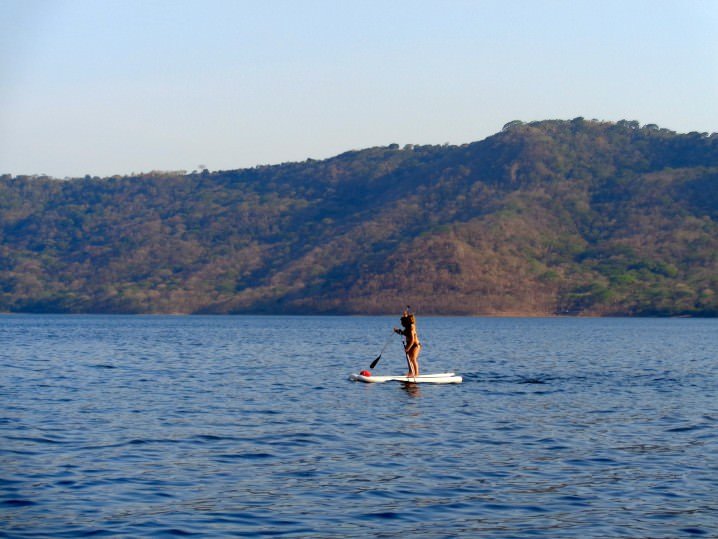 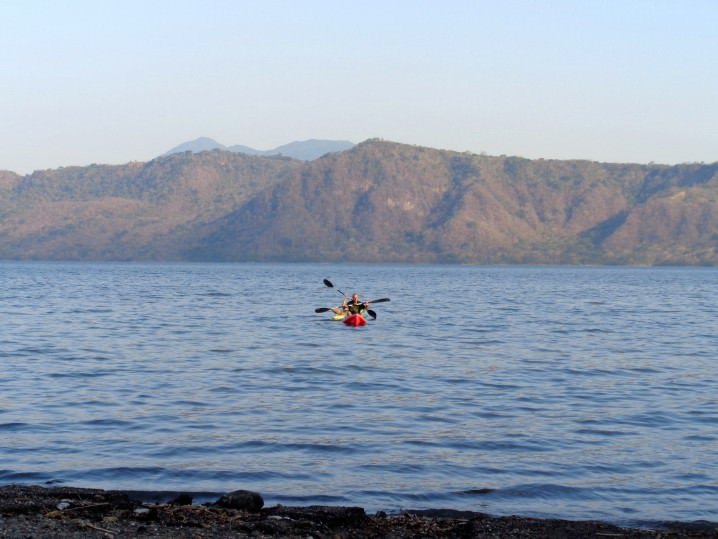 Kayaking on the lake

How to get to Laguna de Apoyo

We took the local rickety bus but there is a shared minibus which runs from Hostel Oasis in Granada for $6 or you can take a taxi for approx US $15. They leave about 10am in the morning and also in the afternoon. There are buses from Masaya. Once you arrive at the Laguna de Apoyo entrance you need to take a taxi down the hill to the lagoon. 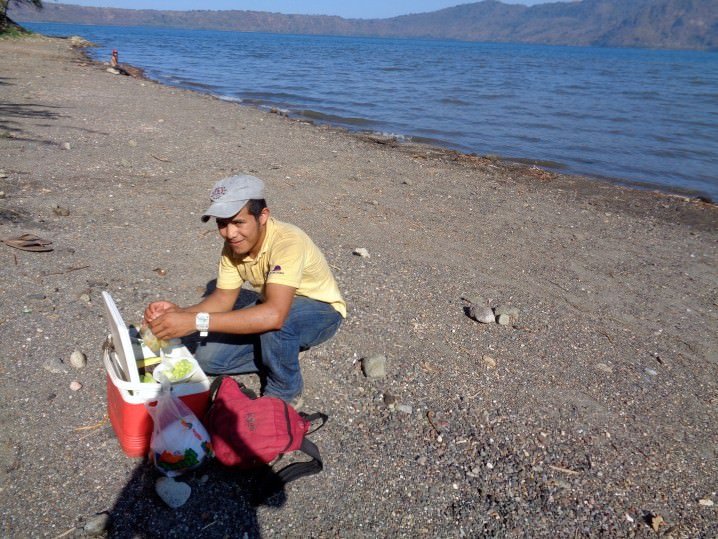