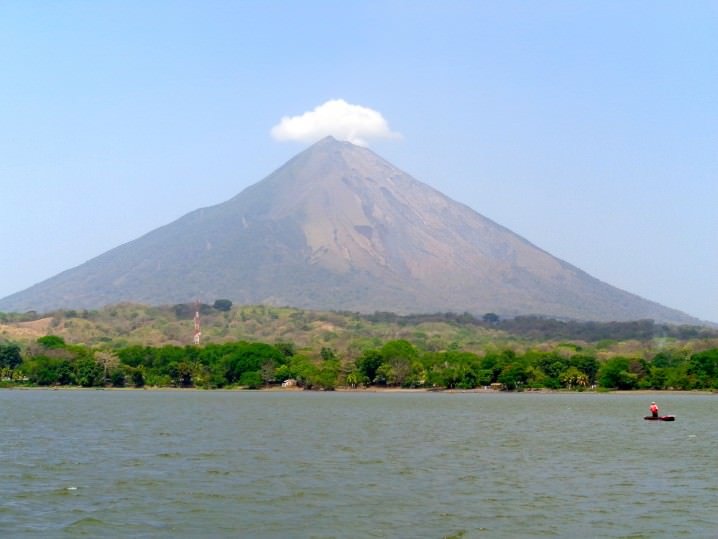 Night was drawing in. I continued to walk, laden with my bag becoming heavier with each step. I felt as though I had been walking forever, and that the path would never end.

I was becoming more afraid. What if I didn’t make my destination before the sun set. I knew that I only had a short time frame before the road I was walking on would be shrouded in darkness.

I heard a squeal coming from the bushes and stopped in my tracks. Then another squeal before a small animal ran onto the road in front of me. I laughed at the small pig that had startled me.

There was nothing to be scared of, but I knew that until I got to the next town, I would continue to be jumpy. 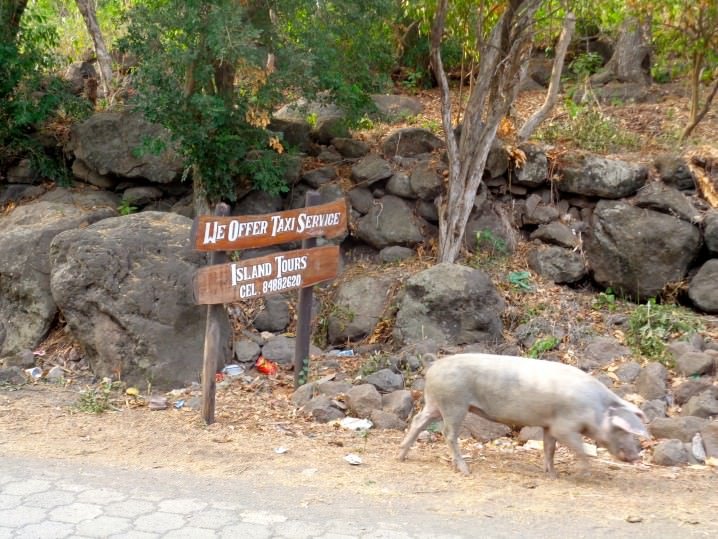 Having left Granada, I had backtracked and caught the boat to Lake Ometepe. This wasn’t a decision that I had taken lightly after hearing numerous stories of “the lake being so rough that people were seasick on the crossing.” Since I could remember, I had suffered from travel sickness whether I was travelling on buses, planes or boats.

Upon each trip, I would stock up on packets of travel sickness tablets to the point where the pharmacist would look at me concerned that I would OD on Sturgeon. There was no way that I was chancing a bad crossing but as my month was passing quickly in Nicaragua, I also knew that I would regret not visiting Ometepe. 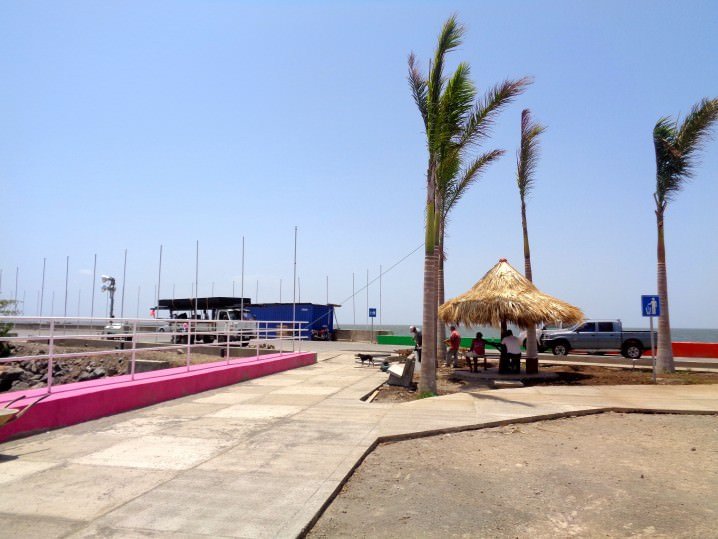 So, nervous and pumped full of seasickness tablets, I joined forces with a German girl that I had met in my hostel. A cute Italian guy had joined us on the bus but when I saw the lancha upon our arrival, I had refused to board it. “I’m not going on that,” I panicked, remembering that I had read that lanchas were the worst.

“But it’s leaving now. We need to get on it,” said my new German friend.

I couldn’t. I waved goodbye to both of them and waited for the larger ferry due to leave in an hour. I wasn’t taking any chances. I knew that I had just given up the chance to spend time with my new friends and that I would probably never see them again (the island is quite big) but my fear of seasickness was more than my fear of being alone.

The ferry was a surprisingly smooth crossing. Apparently, it’s a lottery on how rough this lake will be, but December can be much worse. 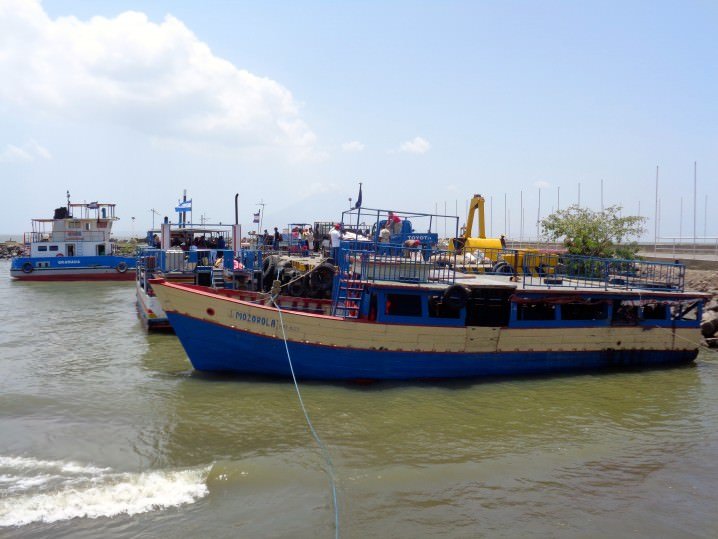 The boats to the island

Walking from the pier I had no idea where I was going to stay. I walked past cheap hotels and hostels but they didn’t feel right. Then a motorbike pulled up next to me.

“Looking for a place to stay?” said the lady as she took of her helmet. I nodded and she beckoned for me to jump on the back. Still, with my backpack strapped on, I joined her on the back of the bike and she whisked me off to my accommodation for the night – Yogi’s Hostel.

Instantly regretting my decision (sometimes my instinct is wrong), I booked for just one night, locked myself in my room and worked as much as I could before checking out the next day and finding a cheaper place with a better vibe. The Landing Hotel was perfect and had a great view of the volcano from the top floor. 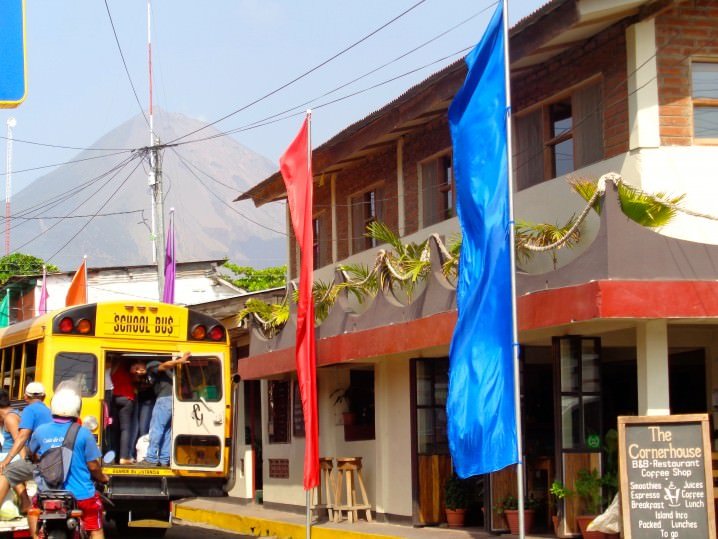 I found a cute cafe and spent the next few days catching up on work before deciding that I needed to explore the rest of the island. So I caught a bus, with the intention of travelling to Balgue. But as my plans always seem to go, I got talking to the only other Westerner on the bus and when she got off, I also felt propelled to get off.

Unfortunately El Zipilote, the hostel that she was planning to go to, only had one tent left and no more beds so I was left at the side of the road, deciding between walking left or right. It felt as though I was in the middle of nowhere and there was no chance of catching a taxi.

Barely any traffic went past. I chose left and had only been walking a few minutes when an Aussie girl with blonde curly hair shouted at me from across the road. “If you’re looking for a room, you can have my hammock. I just checked out so there’s a spare hammock at Lazy Crab.”

Thankful, I asked her where it was. “Twenty minutes that way,” she pointed in the opposite direction to which I had been walking. Changing my direction yet again, I retraced my footsteps and began my walk to a promised hammock.

I never made it to the hammock, but I did make it to a guest house – Hospedaje Asiesmi Tierra, which although had no Wifi, was incredibly cheap and quiet and I did bump into my German friend and the Italian who were walking past me on the roadside.

“Lisa,” Anna shouted and flung her arms around me as much as she could without me toppling over.

“Come and eat with us. It’s my birthday!”

Fate had intervened and after 3 nights of dining alone, I had found my friends. 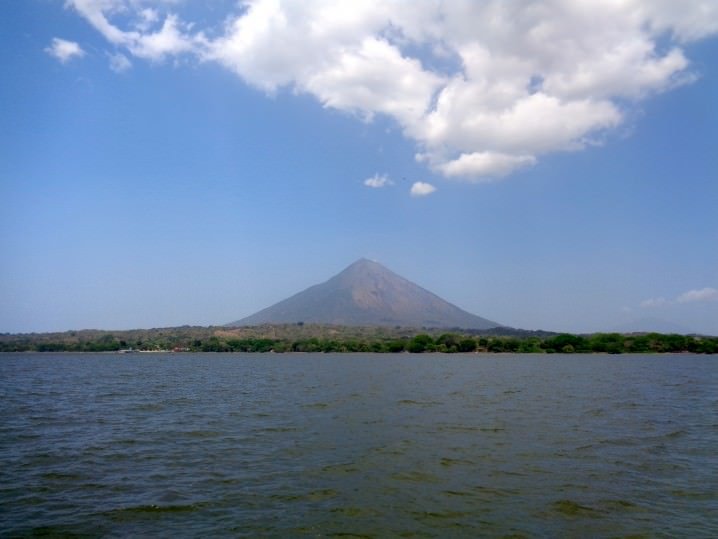 Isla Ometepe, Nicaragua is a unique island. Formed of two volcanoes, it is one of the impressive sites that I have seen in the country. As the boat comes in, the image of the tallest volcano comes into view. You feel far away from the rest of the world on Isla Ometepe, and people get around by bicycle or by hiring scooters.

You’ll find many hostels on the island but if you need Wifi stay in the port town of Moyogalpa. The further out you go, the more remote the island becomes which is great for those who want to unplug, enjoy yoga at El Zipilote, or just cycle to a nearby beach. Plus with two volcanoes to explore, there are plenty of opportunities for hiking. Just take a guide along with you rather than going alone. 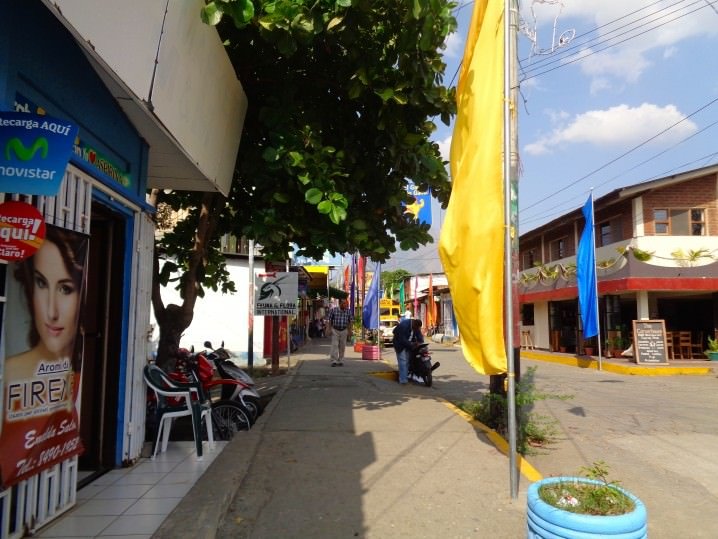 Getting to Lake Ometepe

I took the bus from Granada to Rivas for 30 Cordovas. The journey took 1.5 hours then it was onto another bus to San Jorge costing 7 Cordovas for the 15 minute journey. Boats run from San Jorge to Ometepe. The Ometepe ferry leaves at 10.30am and 12pm. The lancha leaves more often. On the island I took the bus from Moyogalpa to Balgue which stops in Altagracia after one hour then you catch a chicken bus. This cost 17 Cordovas. 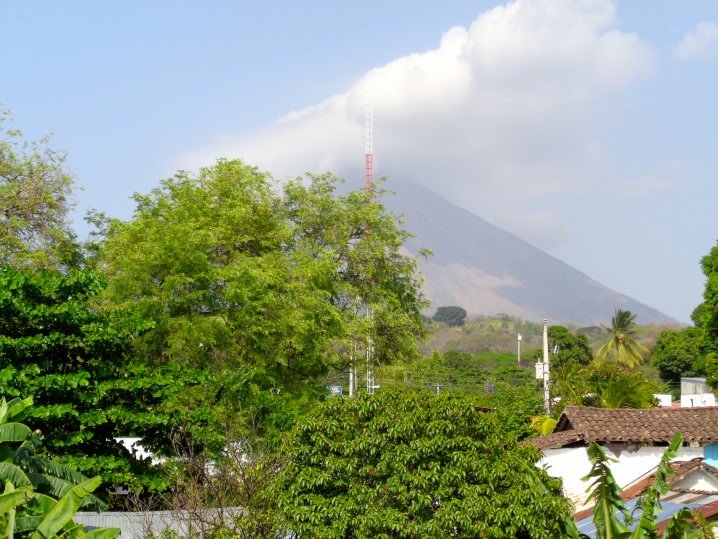 The view from the top of the Landing Hotel 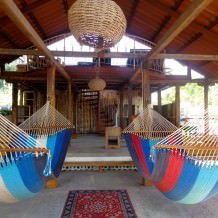 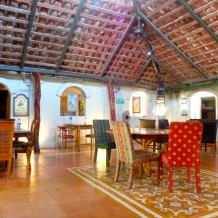 There are only a few hostels in Ometepe. For my first night I stayed at Yogi’s Hostel which was cheap. I then moved to the Landing Hotel which was just a 5 minute walk from the pier in Moyogalpa. They have dorm rooms from $7 per person and a large lounge. They are close to restaurants and cafes. In Balgue, I was heading to the Lazy Crab for the spare hammock but stayed in Hospedaje Asiesmi Tierra instead.

TIP – Although you can find places to eat during the day, it’s a different story at night with not many cafes or restaurants open. So stock up on food to eat for dinner. I would eat early and just have a snack in the evening. 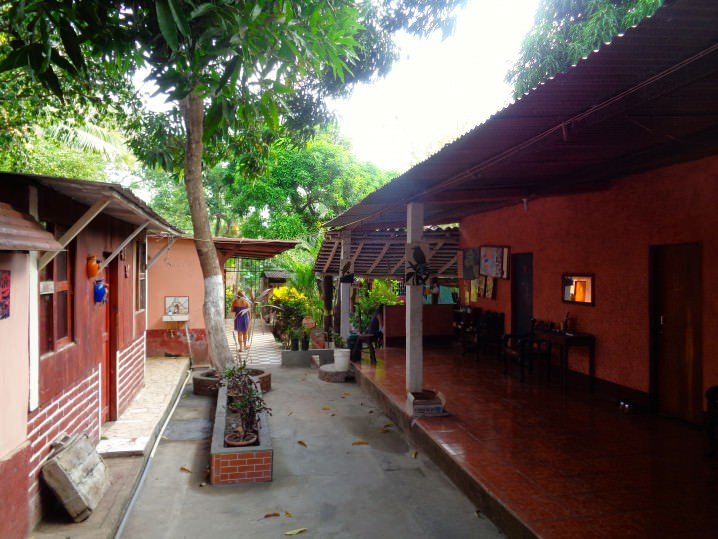 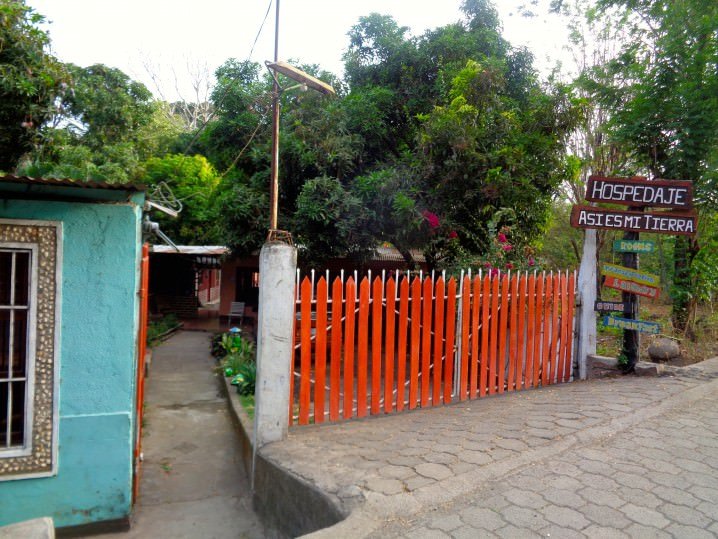