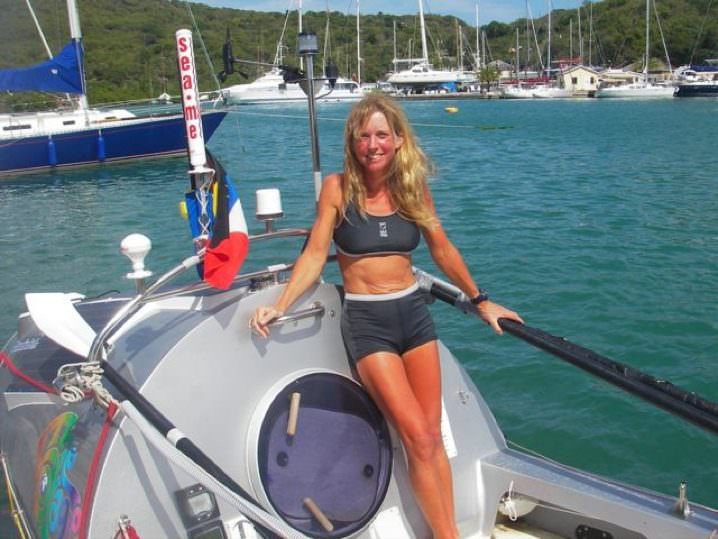 It’s time to get inspired! In the first of our Inspiring Interviews, Girl about the Globe talks to Roz Savage MBE; the first woman to have rowed solo across three oceans.

Roz had the perfect life: a job, a husband and a little red sports car, but forward five years and she was divorced, homeless and alone in a tiny rowing boat in the middle of the Atlantic Ocean…

Your story is so inspirational. Do you ever see yourself as an inspiration to others?

We’re all looking for inspiration, so although people often tell me they’ve been inspired by my books or presentations, I think it says more about them than it does about me! I believe that, once we start trying to be a better person, we look around for sources of inspiration, for those people who make us believe that we can transcend the ordinary to achieve something special. I’ve been very honest about how hard it was for me to achieve my dreams, in the hope that people will take away the message that we can all do great things, but that nothing really worthwhile is ever easy.

All kinds of people, but especially those who don’t get to choose their challenges. There are people who have to do much harder things than I’ve ever done – caring for old or sick relatives, living in circumstances that are difficult or insecure, facing mental or physical health issues – and they won’t ever get to write a book or give a speech about them. They just have to buckle down and keep on keeping on. I find that very humbling.

What was the turning point for you to change your conventional life to an extraordinary one?

I was really not finding happiness or fulfillment in my work as a management consultant, and what really brought that home to me was one day when I wrote two versions of my own obituary. I imagined I was at the end of my life, looking back and considering how I’d spent my time on this Earth. The first version was the obituary I wanted, the second was the one I was actually heading for if I carried on as I was. They were very different, and I realized then I was going to have to make some big changes if I was not going to end up full of regrets.

What draws you to the ocean?

At the time that I decided to row across oceans, I had two main goals. I wanted to test my limits and find out what I was really capable of. And I wanted a platform for my environmental message – I had just “got green” and wanted a way to get people’s attention. Rowing alone across the ocean absolutely met both those criteria.

How did it feel when you arrived at Antigua after 103 days alone and 1/4 of them without any satellite phone contact?

Absolutely amazing!! Like winning an Oscar, getting out of jail, and finishing a marathon, all rolled into one! That first voyage was by far the hardest thing that I had ever done. All kinds of things went wrong – not my fault, just untypically bad weather. But the greater the challenge, the greater the sense of achievement at the end.

Was there ever a point when you just wanted to give up? How did you overcome it?

Just about every day! But the moment I remember the most was one day, just before the satellite phone broke, when I was on the phone to my mother. I was being blown backwards and it really felt like I would never reach dry land. I was really frustrated and upset, and even cried a little. My mother – bless her – asked me if I wanted to give up. My first response was YES! But almost immediately another voice kicked in, and I realized that I would never forgive myself if, having got this far, I quit. I think my mother did me a huge favour by offering me the option to give up, because she allowed me to discover that I had the will and the strength to keep on going, not because I was trapped, but because I chose to.

Have your experiences in life made you more determined than ever to fulfill your dreams?

My experiences have given me much greater confidence that dreams can come true. I used to be very hemmed in by self-limiting beliefs. I used to believe that “I can’t” rather than “I can”. Now, having done things that I would once have thought impossible, I have a much greater belief that “I can” – given enough determination, dedication, and discipline, of course.

As well as an adventurer you are an environmental campaigner. Tell us more about the work that you do.

There are two levels to the work that I do. On the more practical side, I do a lot of work around the issue of plastic pollution in the oceans, having witnessed this problem firsthand on the Pacific, where I rowed around the outskirts of the Great Pacific Garbage Patch. So right now I’m working on a project called TrashMobs, due to launch in summer 2015, which will be a series of beach cleanups around Britain.

But there’s also a more psychological/philosophical side. Our environmental challenges are not about “saving the planet” – they’re really about saving the humans. We are part of this web of life, and if we damage a part of that web, we actually hurt ourselves. We imagine that we are separate from nature, but really we are part of it, and it is part of us, and we need to respect that by replacing what we use.

You’ve travelled solo, what advice would you give to others who want to travel alone?

Going alone definitely has its challenges – if you ever want to get to grips with your personal demons, being solo is the way to do it! But that also makes it so much more worthwhile. I believe that getting to know yourself, and acquiring self-mastery, is the most important work you can do, and fundamentally affects the way you show up in the world, in your career, in your relationships, even your health.

If you’re not sure it’s for you, give it a try on a smaller scale. It might take you a little while to get used to it, but the rewards really are huge. Who knows, you might find you like it!

Finally, after everything you have achieved, what is next on your list?

No more big adventures – at least, not in the immediate future! For now my adventures are taking place in the realm of psychology, neuroscience, and human motivation – and of course trying to leave the world a slightly better place than I found it. 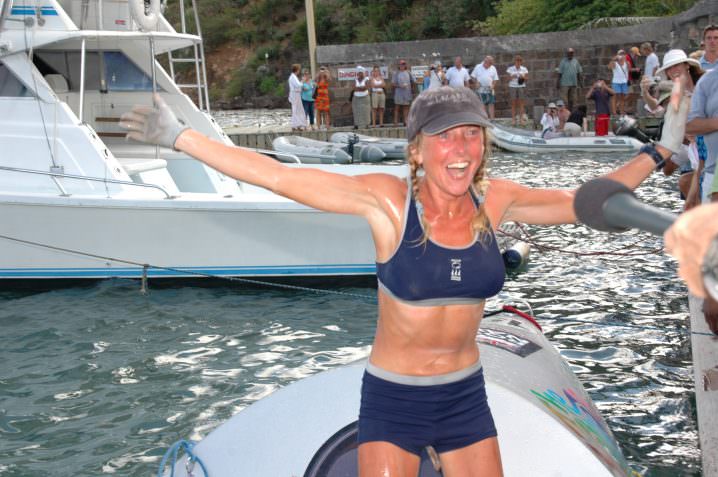 Roz Savage MBE FRGS is an ocean rower, environmental campaigner, author and speaker. She holds four world records for ocean rowing, including first woman to row three oceans: the Atlantic, Pacific and Indian. She has rowed over 15,000 miles, taken around 5 million oarstrokes, and spent cumulatively over 500 days of her life alone at sea in a 23-foot rowboat.

A latecomer to the life of adventure, Roz worked as a management consultant in London for 11 years before deciding there was more to life than a steady income and a house in the suburbs.

Since embarking on her first ocean in 2005, she has braved 20-foot waves, been capsized 3 times in 24 hours, and faced death by dehydration when both her watermakers broke. Her hardships have forced her to find the strength and determination to overcome everything – especially herself.

To learn more about Roz’s inspiring story visit her website