It’s been recognised as one of the top ten hotels of the world but Caves Branch isn’t new to Belize, in fact it’s been hiding in the jungle for nearly 20 years. I caught up with Ian Anderson, one of the most inspiring men I have ever met, to tell me more…

Situated in the Belizean jungle, Ian Anderson’s Caves Branch is more than just an eco lodge, it’s a place to be one with nature, to meet others and be taken out of your comfort zone, and more importantly once you’ve stayed there, you can be guaranteed that you will come out a tougher cookie than when you went in.

Specialising in adventure tours, guests can choose from rappelling into a black hole, climbing waterfalls within underground caves or a more gentler cave tubing along a river amongst others. Staying here for more than one day is definitely recommended if you’re looking for a taste of adventure within Central America.

There’s a great sense of camaraderie at Caves Branch. Although the staff provide an unbelievable experience, it’s the owner, Ian Anderson who really makes it feel like a jungle home. Originally from Canada, Ian moved to Belize over 20 years ago and has become something of a legend in the country ever since. 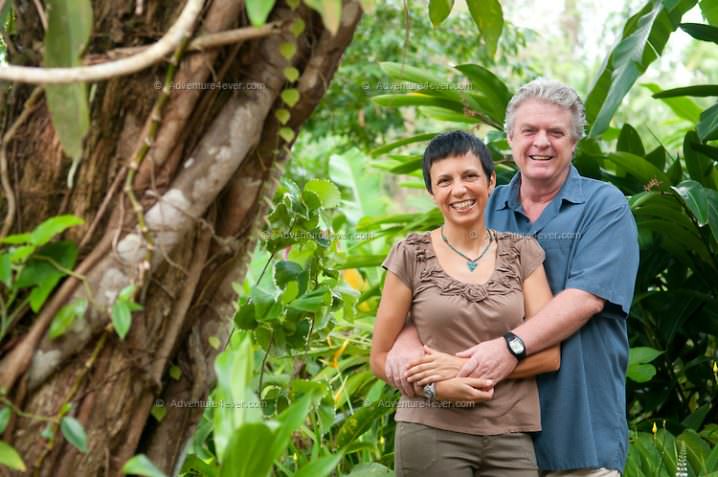 In 1993, just one year after opening Caves Branch, Ian realised there was no emergency response team in the country and started the first ongoing training program for a national rescue organisation in Belize called BDARRT, which has since performed countless rescues.

Then in 2004, Caves Branch started the “Youth at Risk” program, a non-profit scheme for kids in danger of dropping out of school. The BAD CAT’s program helps build confidence and self-esteem through mentoring, tutoring and scholarships as well as the occasional adventure trip. Since this began, over 70% of these youth have graduated from one year to the next and the program has given them a reason to believe in themselves and their abilities.

Three years later, Ian's wife Ella developed the “Belize National Youth Chess Foundation,” a not-for-proft organisation to motivate deprived children through the use of chess as an educational tool. Over 1,000 young people have taken part in the foundation which helps children to develop intellectual maturity thorough memory development, logical and critical thinking and the use of communication.

Since his time in the only English-speaking Central American country, Ian has tackled the problems that Belize has with their youth and in turn has prevented numerous teenagers from joining the many street gangs notorious in Belize City, but he’s not going to stop there…

As well as inviting lonely, elderly people within his community to come to the resort and hang out by the pool, Ian has plans for a retreat to bring together people who want to lose weight and help empower them again so that they leave with a purpose and a sense of self-worth. Always one to want to give something back, Ian has first-hand experience of a boot camp like this after he attended one on a TV show which he says, saved his life when he was battling with his own weight.

I truly have never met such a warm genuine man who really cares for people. Ian’s enthusiasm, passion and empathy just shines through and if you take a trip to Belize, you should definitely pay a visit here. I’m pretty sure that Ian himself will be there to say thanks personally, then you can judge for yourself, what an amazing and inspiring man he is.

N.B. From cheese making adventures to more of the adrenalin kind, Ian Anderson's adventure company and jungle lodge offers an experience that you will never forget but it’s not for everyone. If you’re expecting a sunbathing resort in the middle of jungle, then look again, but if you’re looking for a jungle adventure, pushing those boundaries and meeting adventurous people, then Caves Branch is for you. Visit the website here…