How India Taught Me to Be a Better Traveler 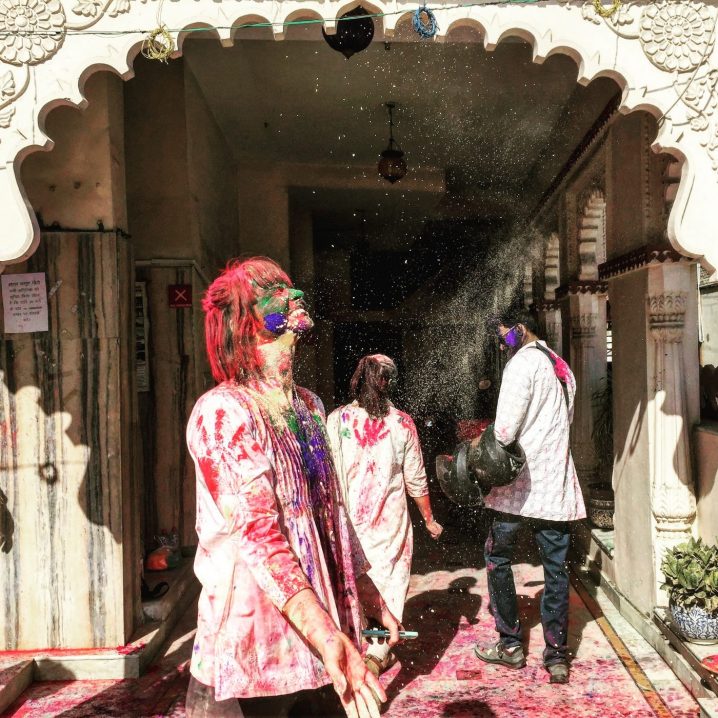 I felt apprehensive, slightly scared, but excited as I boarded the plane. I was headed to India. It felt like this exotic country was beckoning me to visit. The culture, the food, the constant hustle and bustle intrigued me, but I was also nervous. People had warned me about the scares of India, food poisoning, getting robbed, being stared at on the streets. I wasn’t going to let this deter me. India was calling and I was going to go.

Prior to my trip, I carefully prepared, so that I would be a safe and conscious traveler. I read a book- Travel Fearlessly in India, What Every Woman Should Know About Personal Safety, I read blog posts, and other traveler’s experiences before packing my bags. Even with all this planning, my stomach felt like it was lodged in my throat. My travels have taken me to over 30 countries, but no where as culturally different as India.

As I boarded my flight, I was instantly struck by the difference of the passengers on board. The most noticeable fact was that I was the only female, other than the flight attendants. When I got to my row, a man was already comfortably lounging in my assigned window seat. I showed him my ticket and even though he pretended not to understand me, I stood my ground. I wasn’t about to back down and sit in the middle seat if I didn’t have to. As he got up, a few men around us snickered, but I put on my headphones and ignored them.

After a thankfully uneventful flight, I landed in Jaipur. Before you arrive in India, you have to get an e-visa 30 days before your arrival, but don’t worry the application process is relatively easy. It took what felt like an eternity to get my single backpack, but after finally collecting it from the conveyor belt, I was ready to meet my tour coordinator. 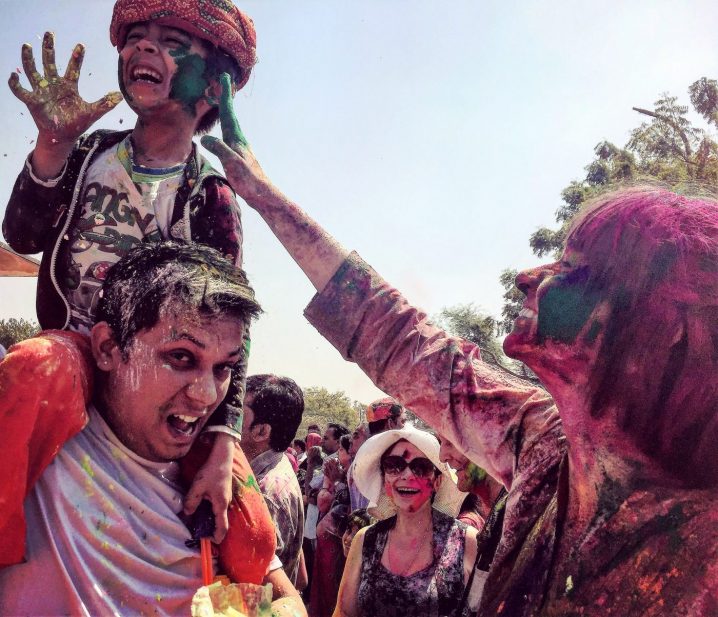 When I stepped out of the airport, India hit me in the face: people yelling, the smell, the dirt, the colors, the vibrancy. I was on sensory overload, but trying to process as much as I could and as quickly as possible. Fortunately, my tour coordinator got my attention and grabbed me by the arm – Whew! I was quickly whisked back to the hotel to freshen up and meet the rest of the group I’d be traveling with.

I learned I’d be spending the next 10 days with a mother-daughter duo from Australia. After quickly applying more deodorant, a spray of dry shampoo, and putting on an outfit that looked slightly less crumpled, I went to meet the rest of the group. As I bounced down the stairs, excited to meet the others, I was shocked when I saw a young woman in shorts and a tank top. Sure, this was an outfit completely appropriate back home in the US, but in India? This was exactly the opposite of what the book suggested.

Even though I’m a bit outspoken and like to speak my mind, I bit my tongue in regards to her outfit choice. I figured it was best not to rock the boat on the first day. I politely introduced myself and learned more about my new travel partners. Natalie was 21 and had a massive following on Instagram. Her mother, Margaret, greeted me with an excited Australian accent.

Natalie, Margaret, and I were introduced to our Jaipur tour guide who would show us around the Pink City. We went to Galtaji Temple, a monkey temple, and the beautiful, white marble Birla Mandir Temple. Our guide, Rajesh, explained the history of the city, which I was absolutely fascinated with, but my Australian companions were less than amused. They continued to get distracted or fall behind the group, which I found irritating. Rajesh showed calmness and patience, which I tried to embody. 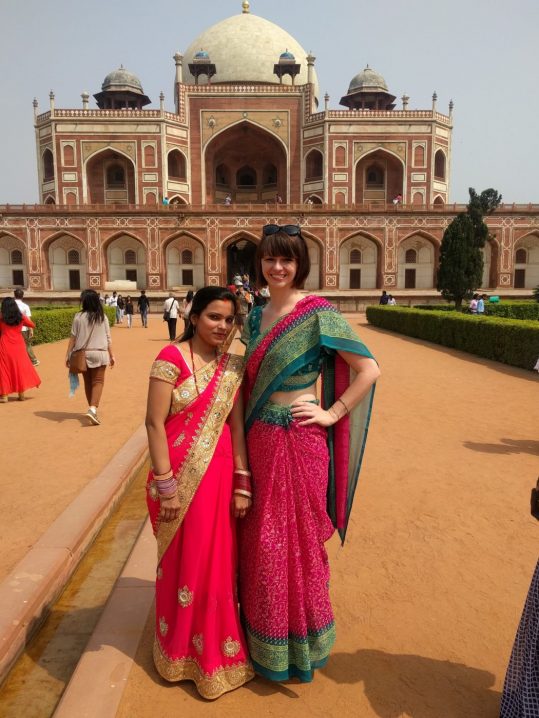 The next few days we continued to explore the many beautiful temples and palaces in Jaipur. The Aussies missed multiple breathtaking opportunities, because they refused to remove their shoes to enter religious temples. I was shocked by this discovery, but let them wait outside as I received my own private tour.

The day I was looking forward to most was Holi – the celebration of colors. This was an experience that had been on my bucket list for years. I had prepared with culturally appropriate white clothing so that when people threw the colored powders, it would pop against my white clothes. I also covered my body in lotion. I had read that the colors not only dye your clothes, but your skin as well. I figured walking around looking like an Oompa Loompa for the next couple of days, wouldn’t be ideal.

On the morning of Holi, I met Natalie and Margaret, but what I found was the breaking point of my patience. Natalie was wearing a tight, white, spaghetti strap dress that left nothing to the imagination. My jaw instantly dropped. This was not OK. Not only was her outfit dangerous to her safety, but it risked ruining my much anticipated experience as well! I refused to bite my tongue any longer.

“Natalie, Holi is not a day that you wear clothes fit for clubbing. This is a religious holiday and I really don’t think that outfit is appropriate.”

Natalie responded, “I wore less in Turkey, I can’t imagine India being any worse.”

I begged her mother to talk some sense into Natalie, but it was no use. The tour coordinator then arrived on his scooter. He immediately said a few words to Natalie, which I didn’t hear, but could only assume were in regards to her clothing choices. Then he turned to our group and began explaining the customs of Holi. 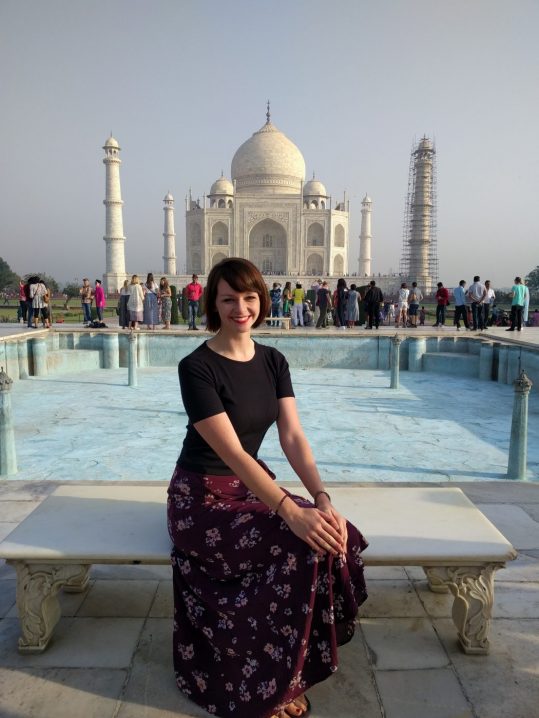 He showed us how to put a bit of the color powder on our fingers then rub some on each check of another celebrator, while saying “Happy Holi.” After being completely covered in powder by the hotel staff, we were ready to hit the streets and celebrate. As we started walking towards the car, the driver saw Natalie’s outfit and said short, abrupt words to her, “No. Change.”

Natalie huffed a bit, but the driver stood firm. He would not allow her to get in his car with her current outfit on. After a bit of a tantrum, Natalie finally gave in and went upstairs to change. I heard a few grumbles about her Instagram pictures being ruined, but I knew she’d realize the reasoning later.

With a more appropriately clothed Natalie, we drove to our first stop of celebration. The streets were filled with people throwing color, shouting in celebration, and enjoying the special day. There were a few times that men would surround us yelling, “Selfie! Selfie!” trying to get photos with us or trying to touch us and rub up behind us to cop a feel, but when things began to get too intense, Rajesh would yell sternly in Hindi and the crowd would back up. Having our two “body guards” with us made me feel safe and I would just give them a look when I’d had enough of a specific group and after a few shouts we’d be back on our way again.

My favorite part of Holi was when Rajesh took us to a temple. Of course the Aussies stayed outside, because venturing in would require removing their shoes. The space inside the temple was filled with people chanting and jumping up and down. Rajesh explained that everyone was waiting for the moment when the curtains would open and the we could see the statues of the Gods. I could feel the anticipation in the crowd around me building and I found myself jumping and dancing along with them.

A horn blared and everyone froze, the curtains opened and before us were bright, beautiful statues. The crowd went wild and began throwing color everywhere. Color bombs were going of and the room was basically a cloud of color powder. It was such an amazing sight to experience and I felt overjoyed to witness such happiness and excitement around me. We got back to the Aussies and even though they were complaining about being left behind and getting harassed, I was on Cloud 9! 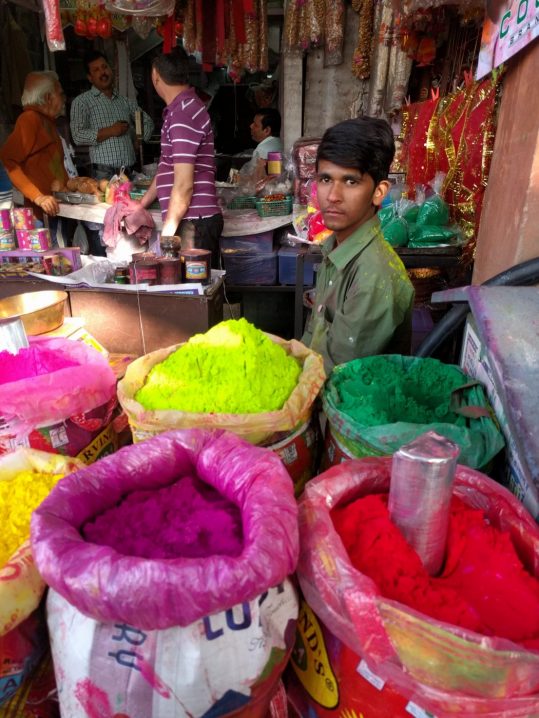 That evening as I took about 5 showers in hopes of getting the color off my skin, I decided I wasn’t going to let the Aussies negativity and lack of preparation, or cultural sensitivity bother me anymore. The only thing I could control was myself and my own actions. I’m glad that I made this choice because the next several days showed me that being humble and kind will only take you further in life.

One morning, Natalie ordered corn flakes for breakfast. I had quickly learned that it’s embarrassing for an Indian person to say they don’t have something, or that they don’t understand, so they will just say “OK” when you order. This is why it’s important to speak slowly, maybe point or use gestures to get your point across. Natalie ordered corn flakes and milk (even though she was lactose-intolerant). Both Margaret and I received our Indian omelettes, but Natalie’s food still hadn’t arrived. I could see her temper beginning to flair. I quietly ate my food.

After Natalie asked for corn flakes multiple times, she finally hit her boiling point. She grabbed the nearest waiter and demanded the whereabouts of her cereal. The man shrank back in fear and I could tell he couldn’t comprehend what she was saying. I couldn’t handle the situation anymore. I don’t care what country or restaurant you are in, this isn’t appropriate!

I calmly and firmly said to her, “Natalie, we are in India. This restaurant may not have corn flakes in stock. They are probably running to a store to buy them for you. It’s not this man’s fault and he doesn’t deserve this behavior.”

Her anger flared in my direction, but fortunately she had better sense than to argue with me and she sat down in her chair. Within 30 seconds, a man with sweat on his brow, who was obviously out of breath, arrived with her precious corn flakes. I shot an apologetic look to the poor waiter and returned to my omelette. The next time I looked up from my plate, I had a second omelette in front of me from a smiling waiter as a form of thanks.

My favorite day in India was when I wore my saree touring around Delhi. It was amazing how many families would stop and ask me to take their photo with them and little girls looking at me like a Disney princess. Men and women would approach me and tell me how beautiful I looked. Even a police woman asked for my photo! I could tell Natalie was feeling jealous that the attention wasn’t on her. Deep down, I hope this showed her that embracing another culture and respecting their modesty would get you further.

In return, I found kindness and respect. As tour guides showed us around in different cities, I treated them with respect by listening to what they were saying, and asking questions. In return, the guides would show me their favorite parts of the city and ask what I was interested in. One guide even took me to his beloved temple that his family went to, while the mother daughter duo sat in their hotel room.

India taught me that patience and kindness always trumps rudeness. I had an amazing trip around the country and connected with people and their culture on another level that my travel counterparts didn’t get the chance to experience. I truly felt like I was able to see the beautiful side of India. 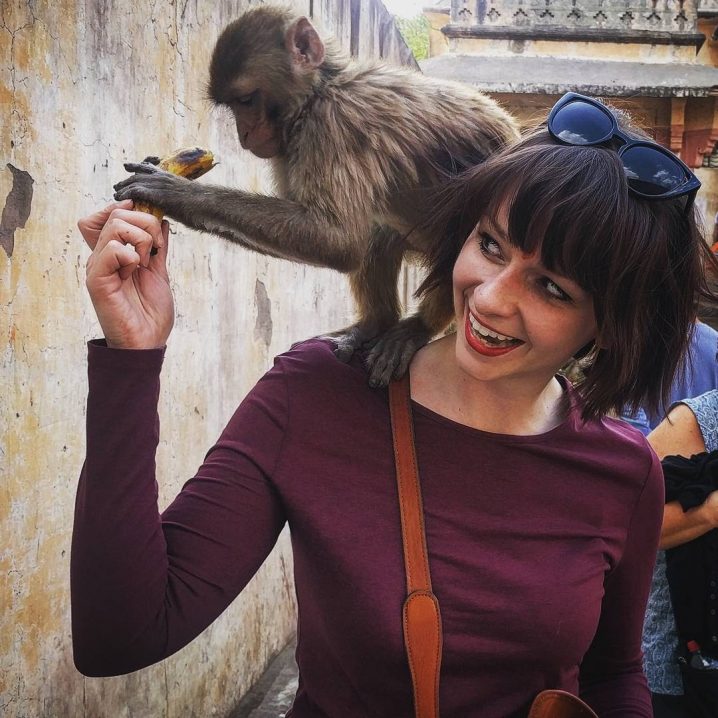 Colleen is a travel blogger at Travel Meets Happy and is the CEO of Kinseyco, which builds affordable websites for small businesses. Colleen is currently in Berlin, but is looking forward to exploring Nepal next.