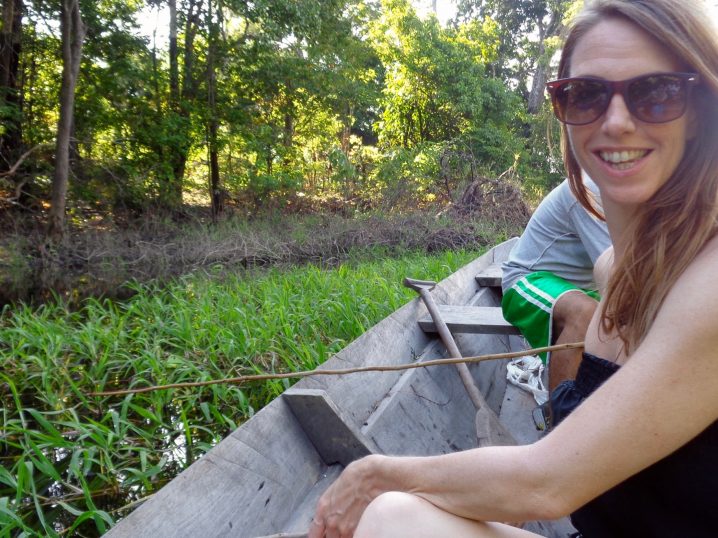 Over my travelling years, I have had some both weird and wonderful adventures. I had stayed with nomads in Mongolia, spent a weekend with a monk and now, I was about to fish for piranhas in Brazil. I guess you couldn’t say that I wasn’t adventurous.

Entering the Amazon especially in Brazil when the Zika virus was still pretty rife probably wasn’t the cleverest idea I’d ever had. But having bypassed this almighty jungle river in Colombia, Ecuador and also Peru, I simply had to see it.

Visions of watching sun sets over the world’s most romantic river, spotting pink dolphins together and spending hours cuddling in a hammock made for two with no cares in the world drifted into my head. 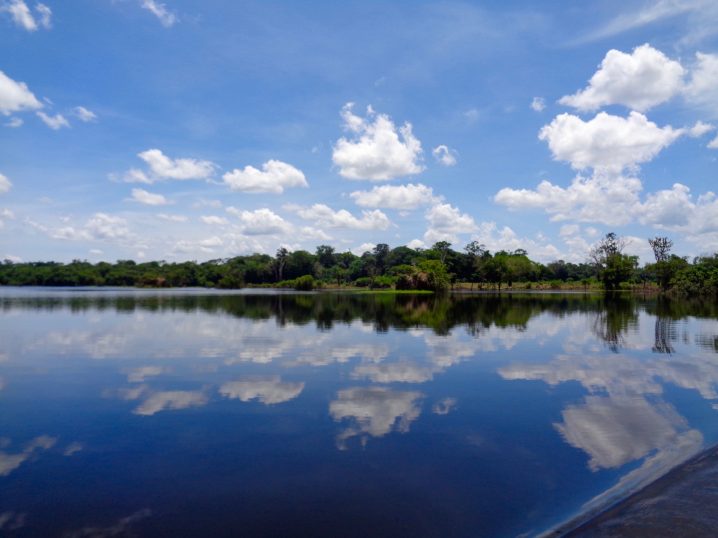 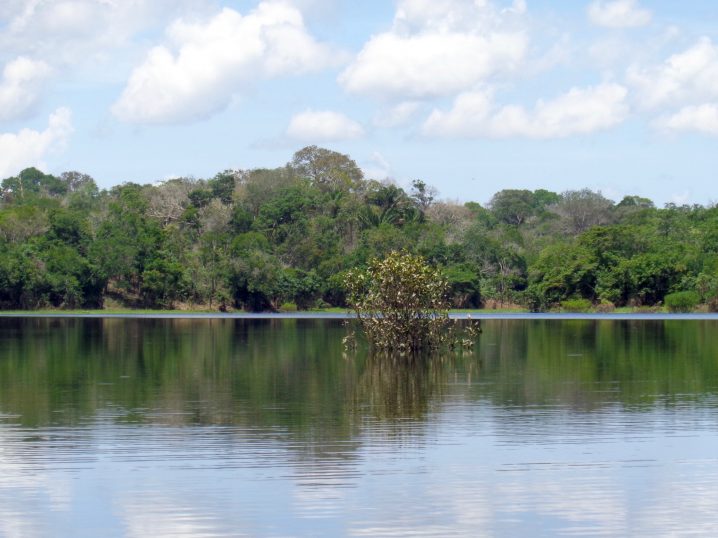 I was about to meet my boyfriend for this trip. Thankfully the experience he had wanted to initially have had changed from a Bear Grills survival style holiday to one of comfort. No longer would I be roasting cockroaches over the fire for dinner but instead I would be eating a freshly prepared slap-up meal in the comfort of a jungle lodge.

But miscommunication at the last moment saw us switching our luxurious holiday for a more rustic one instead. 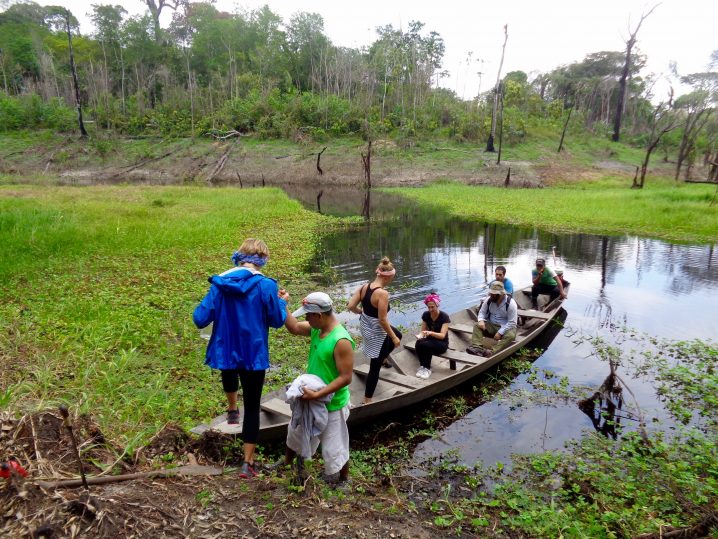 Our journey began from Manaus, the capital of the Amazonas where we took a car, then a boat, then a van to the river ways. From here, we swopped our vehicle on wheels for one on water and hopped into a wooden boat with four more travellers eager for a taste of the Amazon.

We soon arrived at our lodge for the night. Instead of the luxurious one we had been shown on the website, this one looked more rickety. There was no fan, no hot water and not even a curtain on our door for privacy. To top it off, I was welcomed by a cricket in our room. 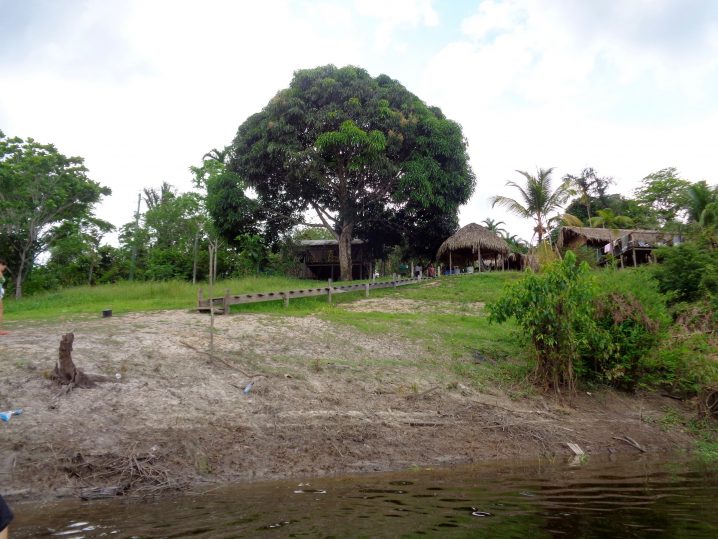 Our rustic lodge for 3 nights 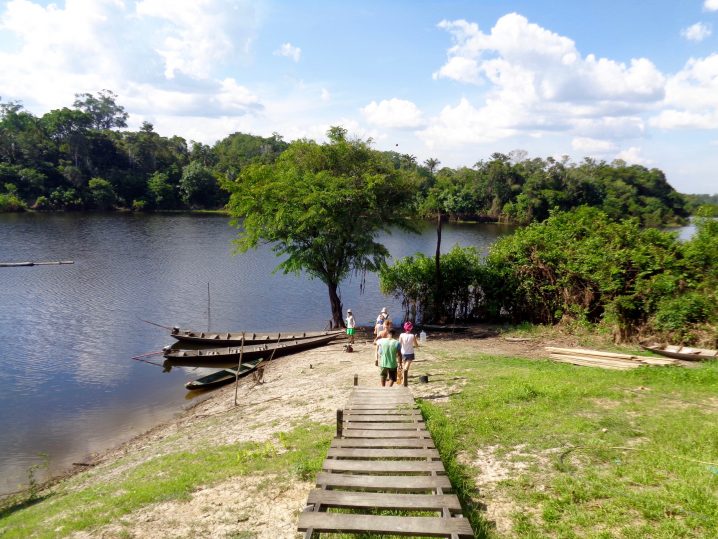 But before we had time to settle in, we were back on the boat ready for our dolphin spotting ride.

But these weren’t ordinary dolphins. Being in the Amazon – these dolphins were pink. Keeping quiet and still, we waited for the grey/pink fin of the dolphins to surface the water, taking snap happy photos as we caught a quick peek. The females here (apparently there are more females than males) grow up to 2 metres 10 cms, and aren’t as big as the male dolphins which can reach lengths of 2.5 metres.

The florescent pink colour happens during mating seasons. It saddened me to hear that these were once killed for meat. Now an endangered species, they are treated with respect and left alone. 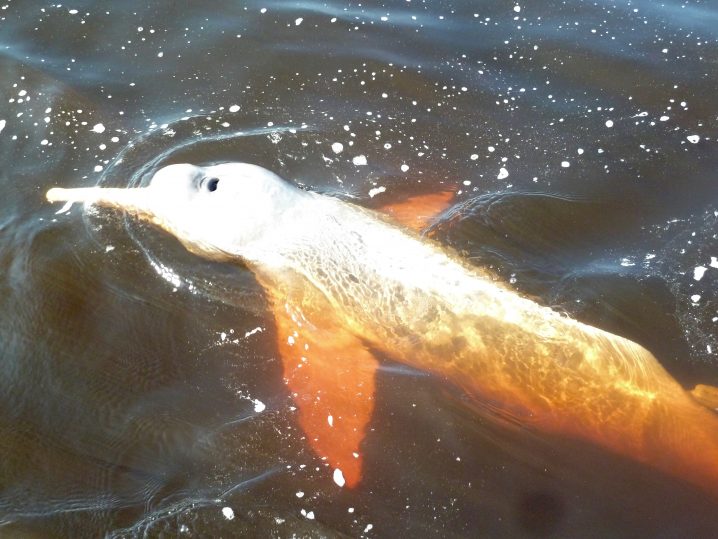 For the second part of our afternoon river experience, we sailed to a local’s house which sounded more like a disco with loud beats blaring out across the quiet of the Amazon river. Greeted by a young teenager, he showed us into his back garden to their farinha factory – a Brazilian food that is sprinkled on nearly every meal.

Made from the yuka plant, the root is fermented to remove the toxins before being naturally compressed. It’s then sifted over a furnace before they compact it into a flour. It can then be added to water to appear similar to rice or sprinkled over fish (or anything else that takes your fancy). All of this happens in this back yard! 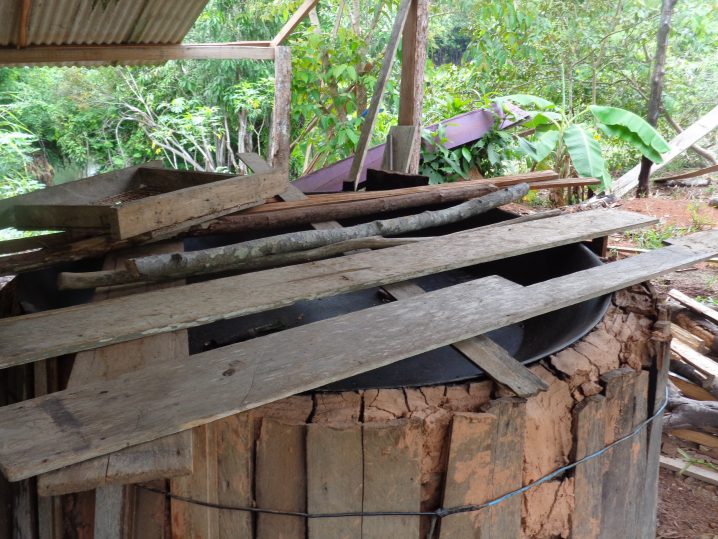 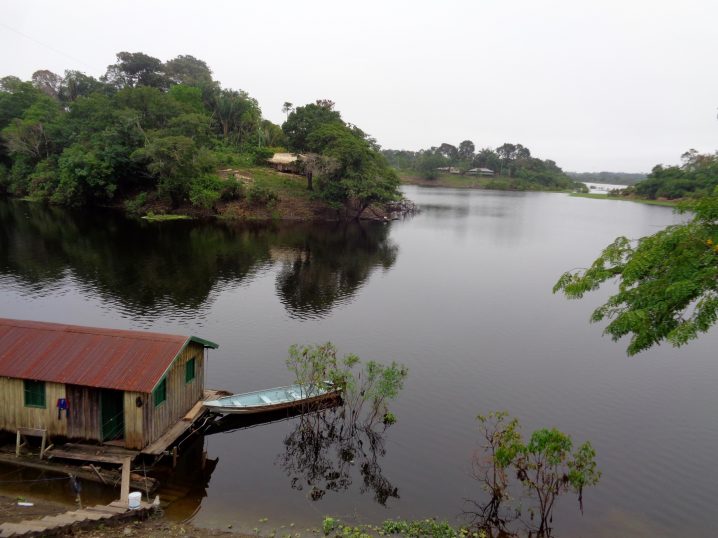 That night we were treated to a dinner of fish straight from the Amazon and I sampled my first taste of farinha.

In the evening I slept under our mosquito net, hot with the Amazon heat, and looking forward to a cold shower in the morning.

Being in the Amazon, the river was full of piranhas and the next day provided an opportunity to catch these scary-looking fish. As I soon found out, piranha fishing required both patience and time. There were different types of piranhas in this river – white, back and even black-spotted. I never even knew that there were more than one type!

Instead of using a spincast reel, we were going back to basics with bamboo. I hooked the dead chicken skin onto my bamboo fishing line and threw it out into the water,  following our guide’s lead. We had been told to make it sound like a fruit dropping from the tree, so I made a large splash before pulling the line back in quickly and doing it again. I can’t tell you the satisfaction of feeling a tug on your line and hauling in a piranha! One of my best accomplishments to date. 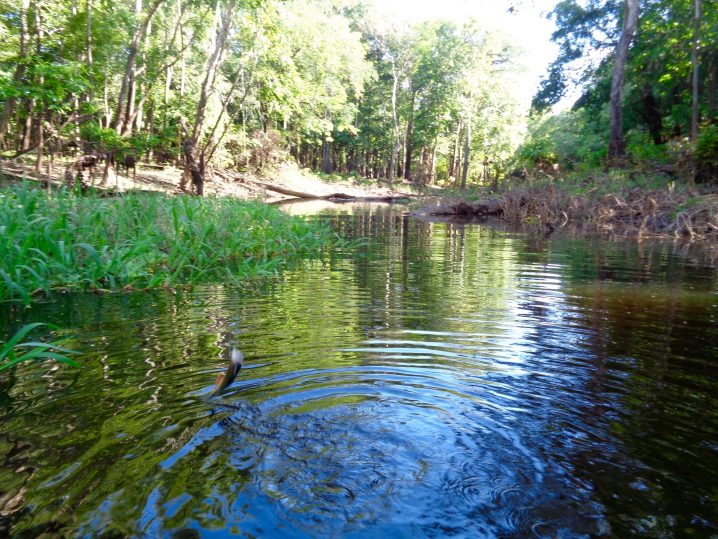 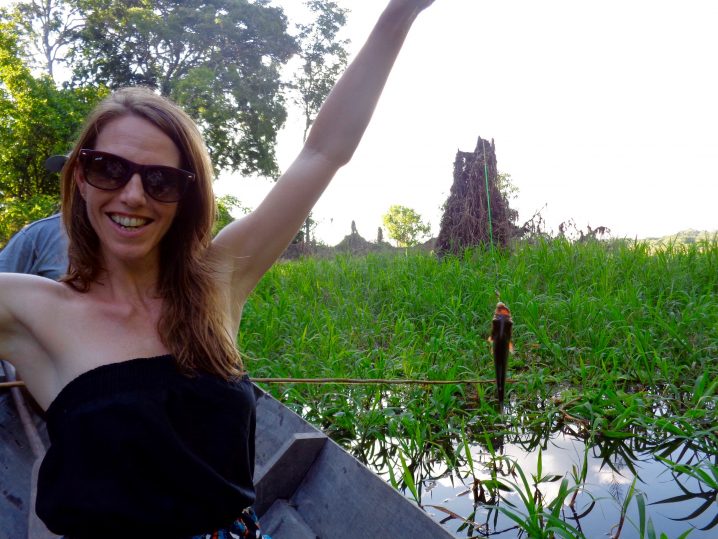 But piranhas weren’t the only thing that we were supposedly catching that day. As the sun went down, I found myself back on a boat (after eating the piranhas that we had caught for our dinner). This time we were crocodile catching. Luckily for me I was just going to be spectating. Our guide, Carlos, would be catching the crocodiles. With images of a Steve Irwin-style catch, with Carlos leaping from the boat onto the back of a crocodile, I was relieved when he didn’t catapult himself into the Amazon.

Instead he sporadically reached over whilst making a loud splash to announce, “oooh, that was a big one. Did you see that?” as he appeared empty-handed.

It was dark and I wore my head torch.

“Got one,” he exclaimed loudly and turned to face us.

“Where?” I asked, expecting to see a giant crocodile.

“There,” said my travel partner pointing to a small reptile that could barely be seen through his hands. 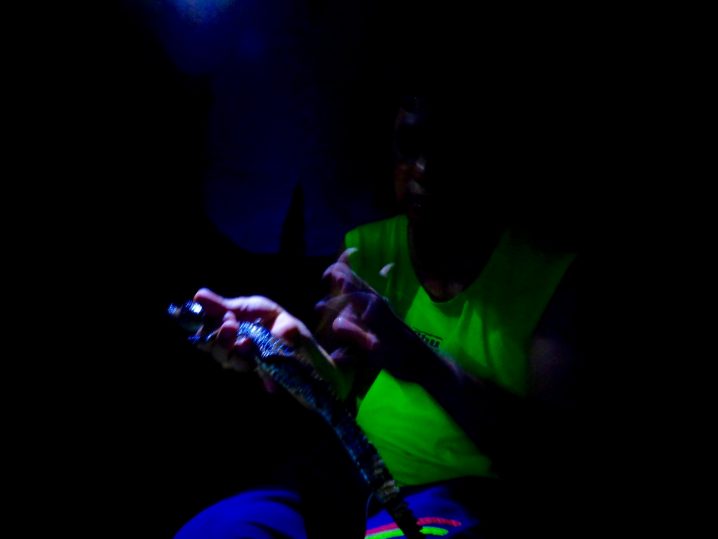 He released it back into the water after everyone had seen it and we continued on our crocodile catching expedition. A mosquito-bitten hour later, we arrived back on land and retreated to our rustic eco shack for the night.

The next morning we took the same wooden boat, van, speedboat and car back to the city of Manaus. My weird and wonderful Amazon adventure had come to close. Here’s to more for 2017! 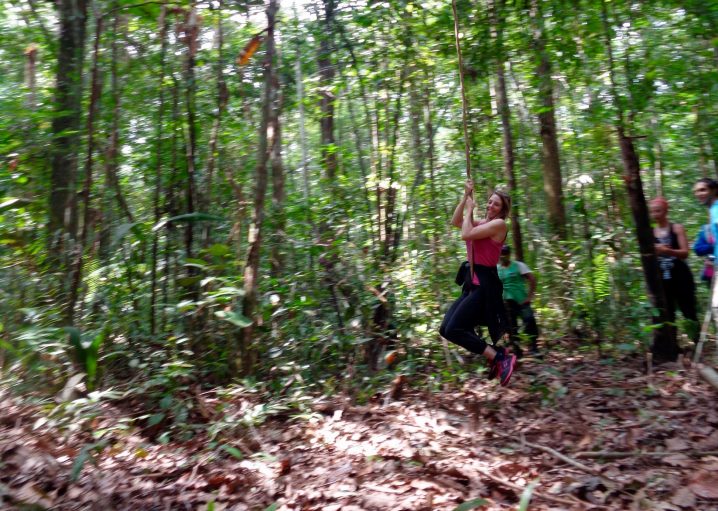 Swinging through the jungle

Where to Stay in Manaus

We used the Tajmahal Continental Hotel as our base in Manaus. At the time (September 2016) it had new management and a special discount of $25 per room per night. It was 5 minutes walk to the beautiful pink Opera House and included an amazing slap-up breakfast.

N.b. The link to the hotel is an affiliate link. This is of no extra charge to you and Girl about the Globe gives 10% of all profits to children’s charities. Thanks for helping x 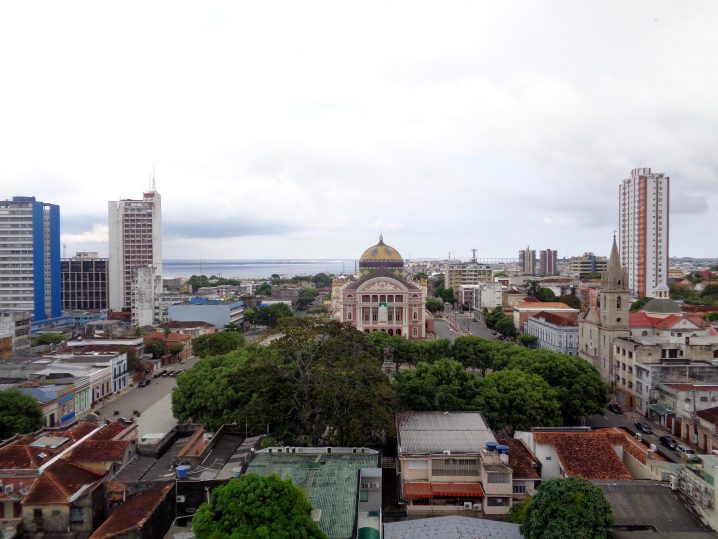 View of the Opera House from the hotel