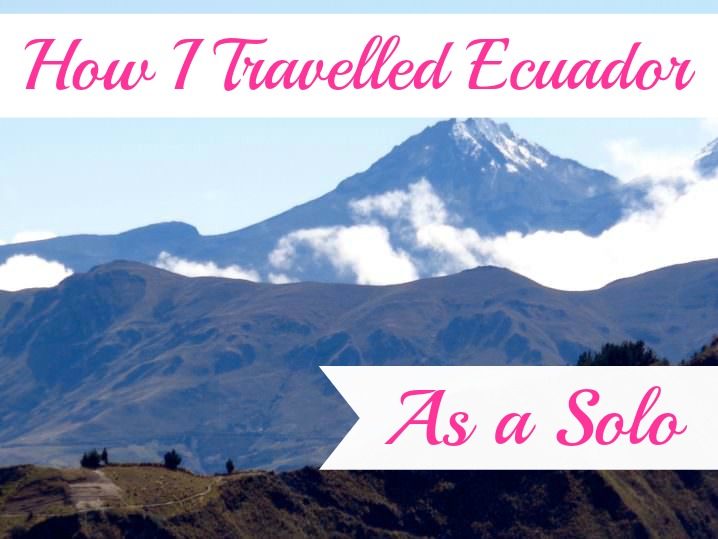 Ecuador is probably most famously known for its islands. The Galapagos Islands are one of its biggest tourist attractions and understandably so. But they aren't the only reason to come to this diverse, South American country. If you love mountains, the coast, indigenous cultures, and the Amazon, then Ecuador is definitely worth putting on your South American itinerary. In this post I share how I travelled Ecuador as a solo.

Being in Colombia, I flew from Bogota to Ecuador and spent nearly a month in this South American country. My usual travel style is backpacking and travelling as cheap as possible, travelling on local buses, staying in hostels and eating street food.

Before I arrived in Ecuador I had been warned about the buses which although were incredibly cheap ($1 for each hour you travel), they were also known for theft. Being cautious, I kept my valuables in my small day pack and kept this strapped to me whilst always on my lap. I had heard stories of others who had placed their bags above them or on the floor and had had their things stolen. I didn't take any chances and I didn't lose anything.

Overall I really enjoyed Ecuador. It has beautiful scenery and was a lovely country to travel through. I didn't encounter any problems as a solo but I did find the area which I stayed at in Guayacil a bit sketchy. I stayed here for one night before flying to the Galapagos Islands. It was okay for a quick overnight stop and I've been told that other areas in the city are perfectly safe.

Ecuador's currency is the US Dollar.I had heard that Ecuador was really cheap but apart from the buses being really cheap, I found Colombia cheaper.  I've listed my costs at the end. 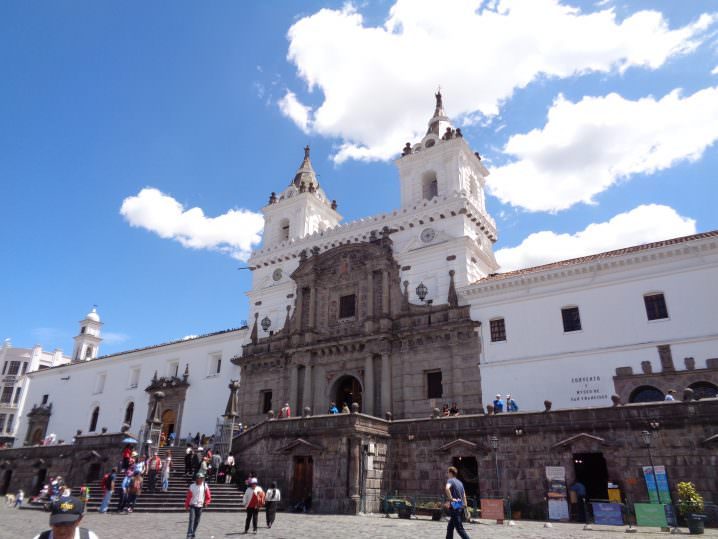 Built on the foundations of an Inca city, Quito is the second highest altitude capital in the world (La Paz is the first), and flying into the city is beyond spectacular. Not knowing much about this South American city, it surpassed my expectations and I liked it so much that I spent a week here. Apart from visiting an environmental project here for visit.org, there are plenty of other things to explore in this city.

Take the Teleferico (cable car) – For views of the city. Quito’s cable car is the highest in South America and reaches the top of Cruz Loma, where you can see the Pichincha volcano.

Stand on the Equator – You simply can’t come all the way to Ecuador and not stand on the Equator. The $4 entry fee also gets you fun and games inside as you follow your guide and walk along the line, try balancing an egg on the line and feel the resistance from the north to the south.

Free Walking Tour – Take the free walking tour around the city. Explore the old colonial neighbourhood with an organic chocolate factory, and the main square an impressive statue of goddess Libertas. The tour takes approx 3 hours and you pay a tip at the end.

See The View at El Panecillo – Like Brazil, Quito has its own Jesus statue or rather Virgin of Quito which looks down upon the city and separates the north from the south side. Although up close the virgin looks like pieces of stone ruggedly put together, you can get a good view of the city and there is a mini museum on top.

Things To Do in Quito

Sustaining Life in the Ecuadorian Andes

I stayed in the modern area at BoutiQuito, a design hostel which was only a 15 minute walk to a supermarket. It cost me $38 for 5 nights and breakfast wasn't included. There were buses from here into the city or you could take a taxi. I then moved to a different part of the city and stayed in Hostal L'Auberge Inn which cost $28 for 2 nights without breakfast. 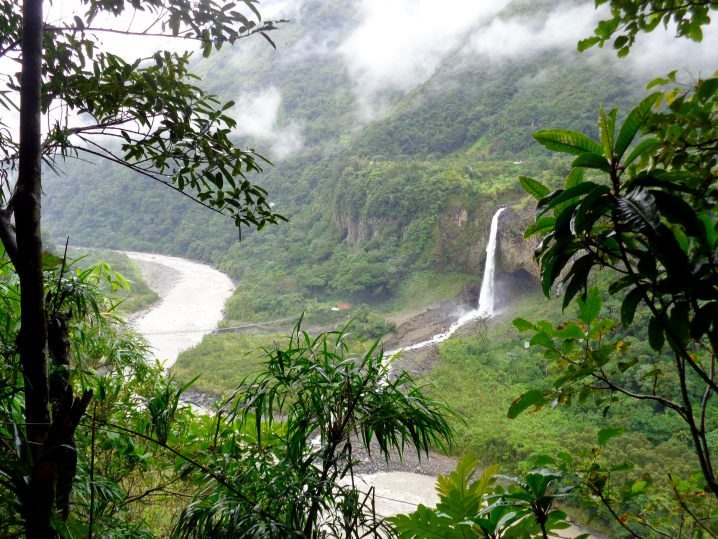 From Quito to Banos I took the express bus from Quitambe which took approx 5 hours. The bus station was surprisingly modern and it was really easy to book a ticket from a ticket counter saying “Banos” in big letters. Banos is gorgeous and definitely should be a stop on your itinerary. It’s the adventure mecca of Ecuador and is very lush and green.

Things to Do in Banos

The Swing at the End of the World – Otherwise known as Casa de Arbol. This swing is a little scary but apparently on a clear day you can see the Cotopaxi volcano as you swing.

Take a chiva tour – My chiva tour was ridiculously cheap. I paid $3 for a 3 hour tour and was taken around the best places to see. This didn’t include any entry fees or activities but paying $1.50 to see Pailon de Diablo was simply too cheap for this amazing waterfall.

You can also hire a bike, go zip-lining or throw yourself of a cliff. It’s definitely for the adventurous.

Related posts – Banos – The Swing at the End of the World

I stayed at Backpackers Balcones which was cheap but the manager seemed a bit strange. It was a sociable place though and I did meet some great people here. It was in a quiet area and you could see the waterfalls from the property. It cost me $20 for 3 nights. 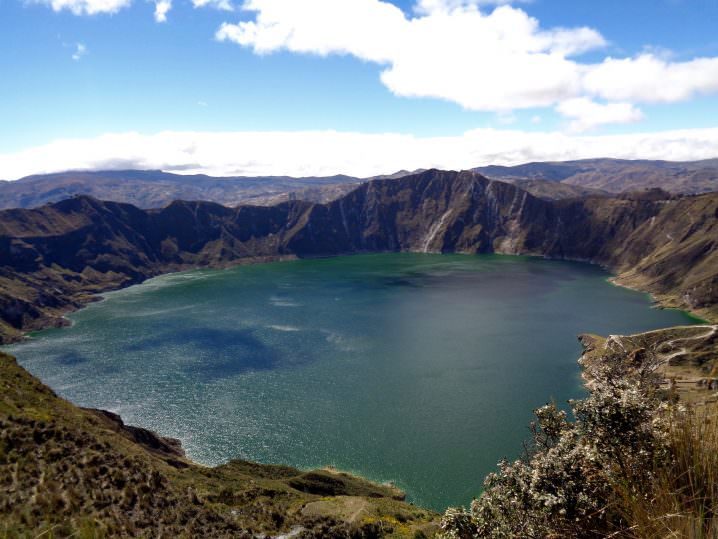 My next stop was Chugchilan, my base to see Quilotoa Lagoon. But it was a mission to get here from Banos. I took a bus from Banos to Latacumbo where I got dropped of at a dual carriageway and had to hail a taxi to the bus station, then from here I caught a bus to Chugchilan and passed through Quilotoa, where most backpackers got off to stay near the lagoon.

Things To Do in Quilotoa

Quilotoa Lagoon is stunning. It has a huge crater measuring 3km in diameter and a lagoon 240m deep which appears to change to different hues of blue, silver and even green. To walk around it takes approx 4-6 hours with magnificent views from so many angles.

I stayed at the Black Sheep Inn Ecolodge, which has been voted one of the Top 10 Eco-Lodges in the World. It has also been named one of the World’s Best Hotels according to National Geographic. A dorm bed cost $35 including all 3 meals and they give you a packed lunch if you go hiking. From here I took a jeep tour to Quilotoa Laguna just 30 minutes away. 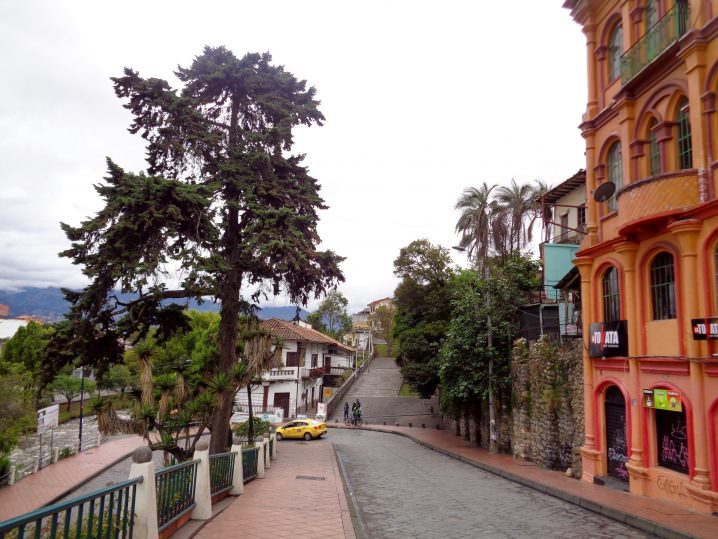 Then it was off to Cuenca where I took the bus from Chugchilan to Riobamba (2.5 hours for $2). From here I went to Cuenca which took 7 hours and cost $8. This UNESCO World Heritage Site is the third largest city in Ecuador (after Guayacil and Quito) and has a population of less than 300,000 people. Cuenca is a stunning colonial city at a lower elevation than Quito with a year-round mild climate.

Things to do in Cuenca

Visit a Church or Cathedral – The Cathedral of the Immaculate Conception is my favourite. This pink building is a mix of Italian marble, and Spanish stained-glass, and it’s easy to see why this tall stunning piece of architecture took approx 100 years to build it.

Shop at a market – Ecuador is one of the biggest exports of roses and the flower market at Parque Calderon is a colourful display and a great photo opportunity for would-be photographers. You’ll see Ecuadorians in traditional dress selling their produce within the markets, and even just sat on the streets outside.

Visit a museum – Did you know that the Panama Hat was made here and not in Panama as most people think. The Panama Hat Museum won’t take you long to look around but it has a colourful array of hats to try on. For history of the indigenous people of Ecuador and also of the county visit Museo Banco Central.

I stayed with a friend of a friend who runs an Airbnb for $20 a night but there are lots of hostels here and I had a coffee in Hostel La Cigale which looked really nice and had a restaurant. Save £20 off your first Airbnb stay. 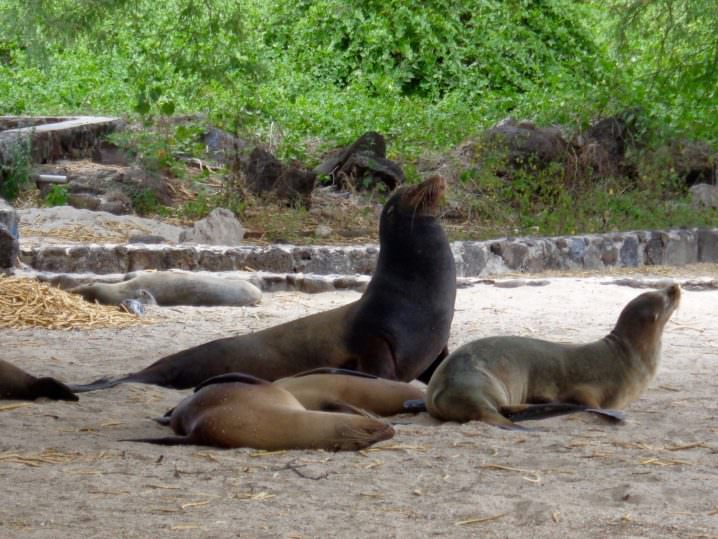 From Cuenca to San Cristobal

I caught the bus from Cuenca to Guayacil which cost for $8 for 4 hours. You need to pay 10 cents to go through a turnstile at the bus station though. I stayed overnight in Guayacil which I wouldn’t recommend as it’s not a nice place. I flew from Guayacil to San Cristobal and spent 2 nights on the Galapagos Islands. If you are on a budget (like I was), you can still experience these islands on land without doing a cruise.

Things To Do in the Galapagos Islands

See the wildlife – The Galapagos Islands are known for their wildlife. You can find pelicans at the marina or flying around and diving into the sea. Sea lions are found on the public beaches such as Playa Mann, which is home to more sea lions than you can count. Then there are the Marine Iguanas which can be found at Puerto Chino beach. You have to see the giant tortoises which only exists in the Galapagos (under natural conditions). I visited the Tortoise Breeding Centre which was opened to ensure their survival. There are 11 different species of Galapagos Tortoises and apparently the island of San Cristobal once had more than 100,000 giant tortoises.

Related Post – How I did the Galapagos Islands on a budget

Accommodation in the Galapagos Islands

You can find rooms as cheap as $25 per night on San Cristobal. I stayed at Hostel Terito which was amazing and the owner was waiting for me when I arrived to take me to his accommodation.

Time in the Galapagos Islands – 4 nights. 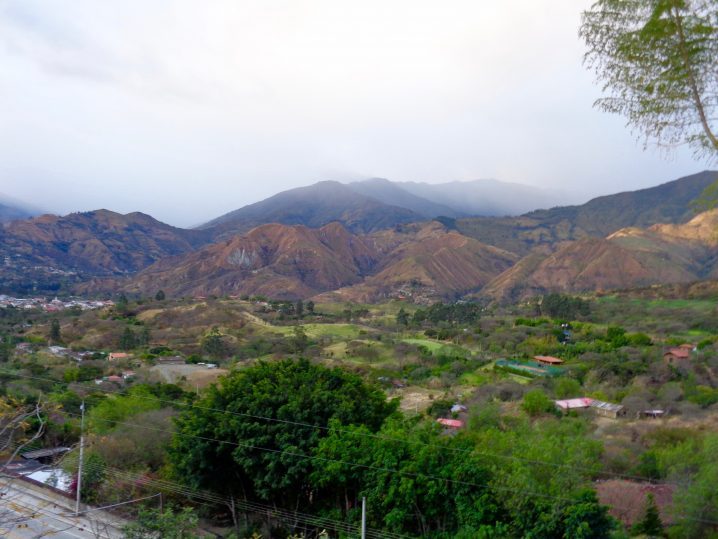 I returned back to Cuenca for a night then caught a minibus the next day to Vilcabamba. My last stop in Ecuador. I took a minibus from Hostel La Cigale which left at 14.30 and arrived at 19.15 in Vilcabamba. The cost of the transfer was $15 one way.

Vilcabamba lies in the south of Ecuador, an hour away from the city of Loja, a thoroughfare for travellers traveling south to Peru. Named ‘Sacred Valley’ in Quechua, the indigenous language, Vilcabamba is a picturesque valley with mountain ridges, and red sandstone formations, and an amazing energy to it. There isn’t that much to do here except hiking, and horse riding but it is definitely worth seeing if you are heading down to Peru.

I stayed at Hosteria Izhcayluma, which offers meditation, yoga, and spa treatments with amazing views. The minibus took me straight here which was perfect. Dorm rooms cost from $9.50 a night. 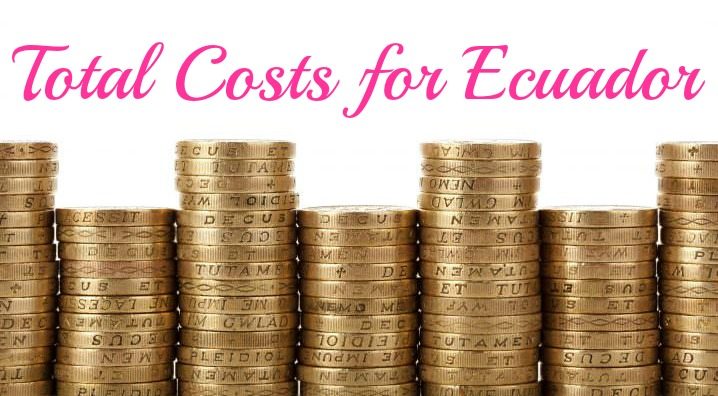 From Ecuador I travelled to Peru, which I’ll be sharing in another post. I hope this has helped make solo travel easier for you if you are planning to go to Ecuador. Let me know your experience in the comments 🙂

N.b. Some of these links are affiliate links. You still pay the same price but GatG makes a small percentage on your purchase. I give 10% off all profits to children's charities every month. Thanks for helping x

2 thoughts on “How I Travelled Ecuador as a Solo”