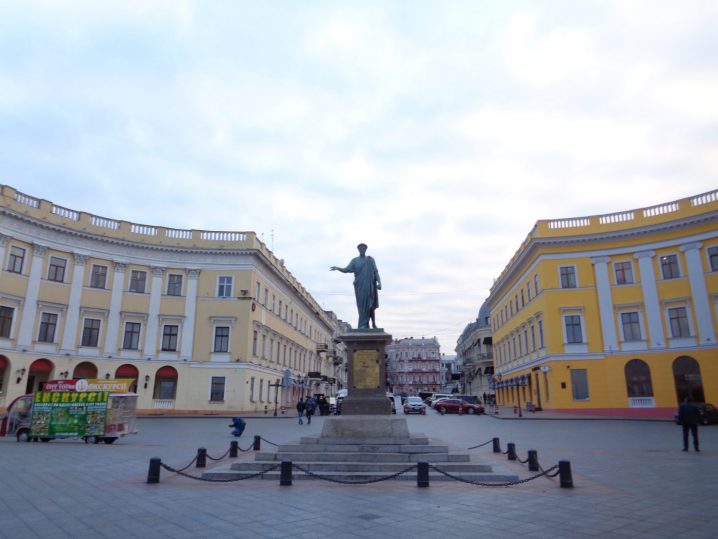 If you’ve ever wanted to ‘party like a Russian,' (cue Robbie Williams’ song), then Odessa in Eastern Europe is the place to do it.

Founded in 1974 by a Russian Empress called Catherine the Great, Odessa served as an important port. Being strategically close to Russia it meant that the city was able to provide protection from foreign invaders.

Nowadays this Ukrainian resort on the Black Sea coast is where you’ll find the party. Both Russians and Ukrainians come from all over the country for a summer break but Odessa has so much more to offer than vodka shots, DJs and the best clubs.

If you are travelling to Odessa, here are my recommendations of what to do in Odessa as a solo. 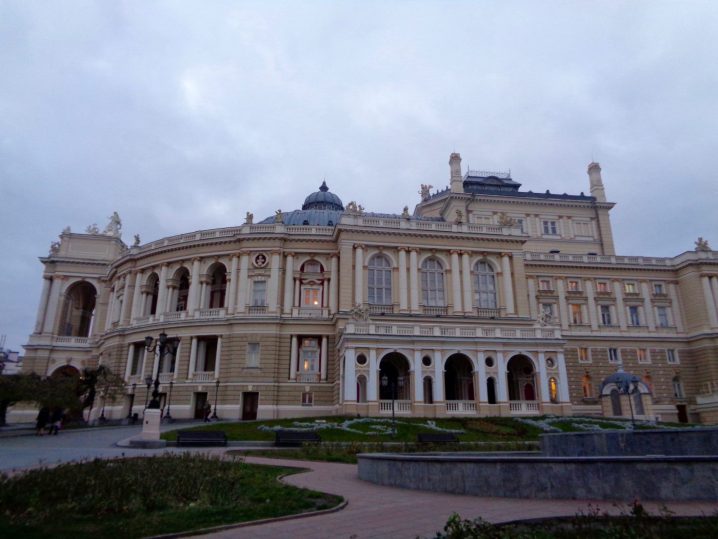 One of most important attractions is the Opera House. Once called “the best opera in the world,” this beautiful building is in a true Vienna style, and was designed by Austrian architects. The interior oozes luxury with red velvet decor, sculptures, and antique columns and is worth a tour but if you are in Odessa on a Friday or Saturday, instead of taking a tour buy a ticket for a performance instead. It’s cheaper and as well as seeing inside its beautiful interior you get to watch an amazing performance. Plus it’s a great activity to do when you are solo. 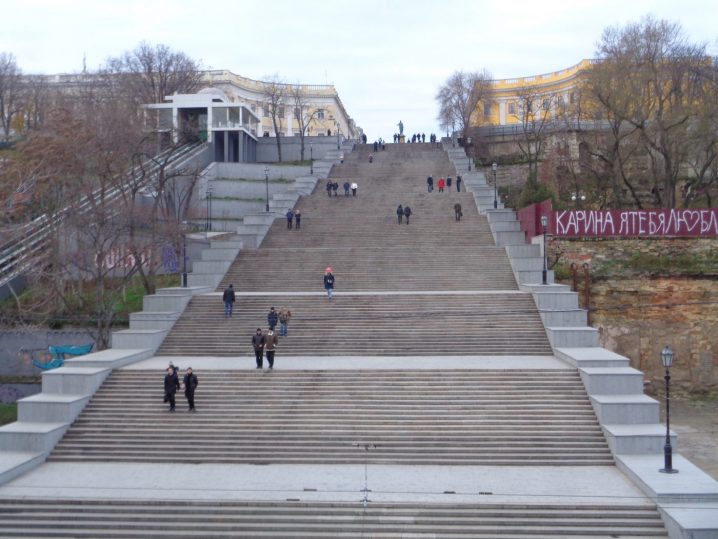 As one of the city’s icons, this giant stairway is a monument to the battle that took place here in 1905. It’s even starred in a movie in the early 20th century called Battleship Potemkin. The steps are also a symbol of the city’s philosophy. When you look up you see only stairs to climb which represents the ‘hard way.’ Looking down you see platforms symbolising the ‘easier way.’ 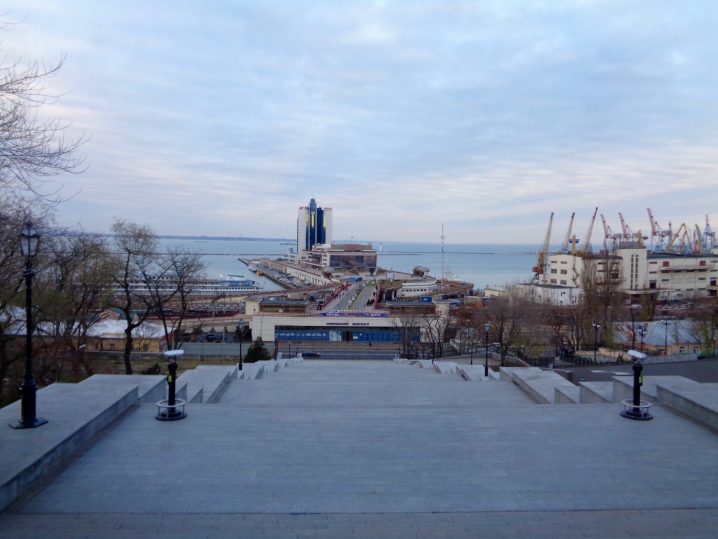 Whichever way you look at it, the stairs are definitely a must-see in Odessa and offer a great view of the harbour from the top. If you don’t want to climb them you can take the funicular instead which leaves from the bottom of the steps on the left-hand side. 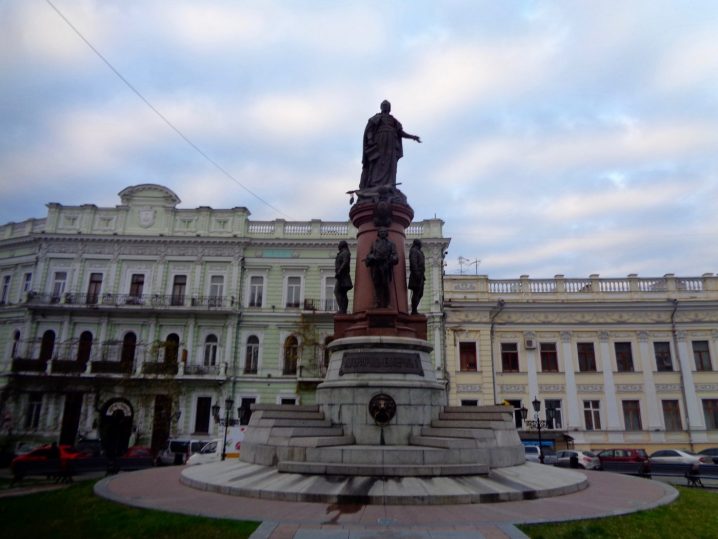 As you reach the top of Potemkin Steps you’ll enter Catherine Square. Named after Catherine the Great, the monument that sits in the centre is the Monument to the Founders of Odessa – Catherine herself and her associates who helped build the city and the port. The monument was constructed in 1900 but the granite statue is controversial.

A police car is parked close to the square to prevent anti-Russian haters from destroying the statue. The square itself is quite small but it is surrounded by stunning architecture with nice restaurants and bars nearby. 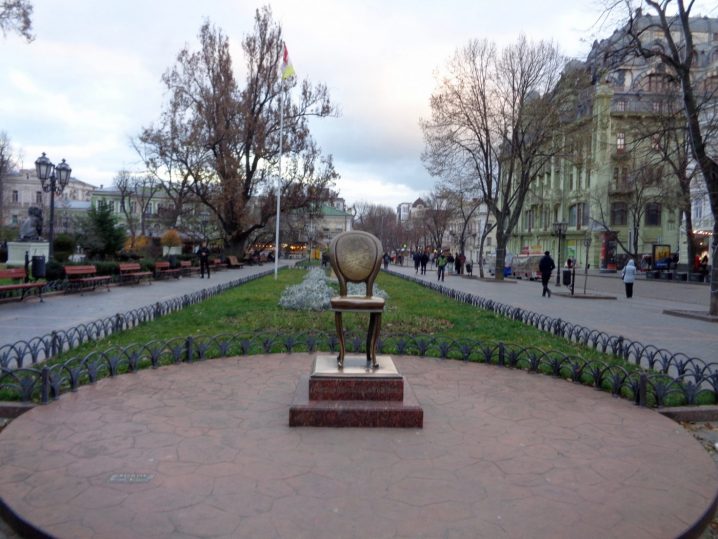 Walk around Odessa and you’ll see plenty of quirky sculptures and monuments. The monument to the 12th chair is one of the most well known. It is based on the novel The 12 Chairs, a famous story of two writers from Odessa. The story is set back in the days when Ukraine was part of the USSR and although its location is in an imaginary town, it is believed to be Odessa. 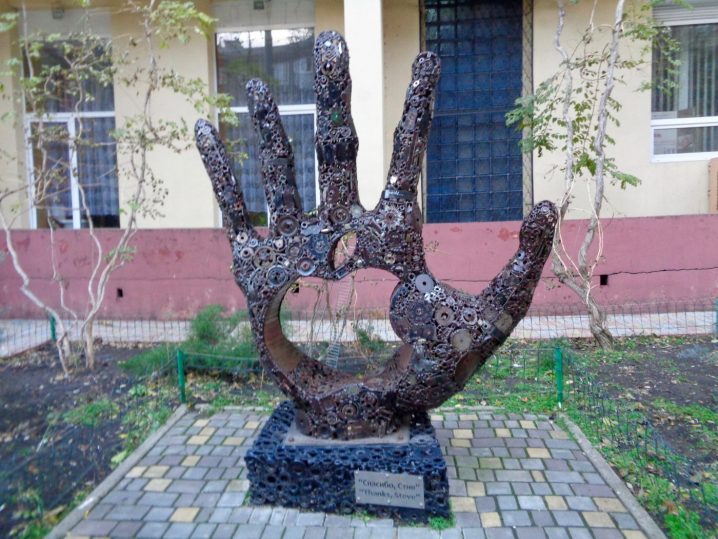 Then there’s the monument to the Sailor’s Wife which stands at the city’s waterfront. The bronze child waving her father off on the ship whilst her mother holds her on the rails. It’s a poignant statue.

My favourite one is the one dedicated to Steve Jobs, founder of Apple. This two metre hand was created by scrap metal on the first anniversary of his death. and the sign on it simply says “Thanks, Steve.” 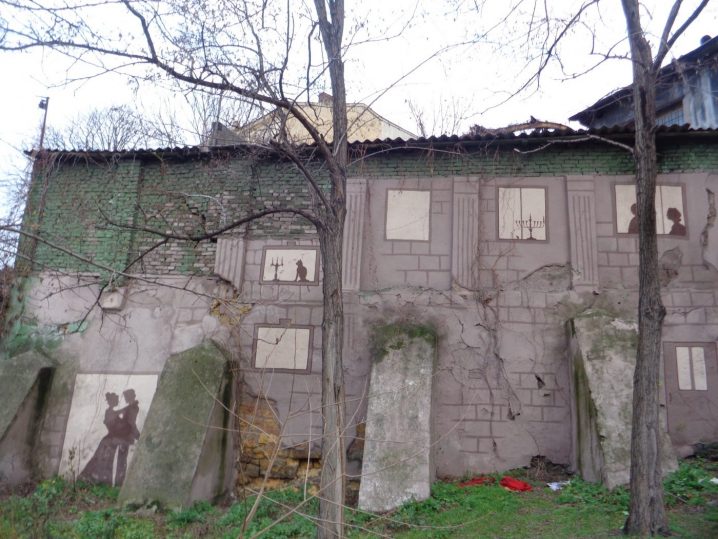 What I love about Odessa is that it is a really nice city to walk around. From the port area to the train station, you can wander through calming parks, stroll past squares, and just admire the different buildings. Even the dilapidated buildings and walls have been spruced up with silhouettes of Victorian people peering out of windows or riding a tandem. 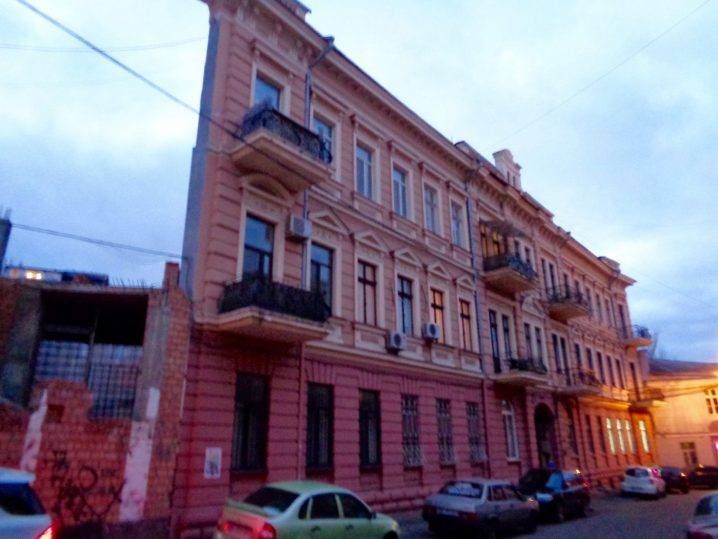 The Flat House is definitely an unusual piece of architecture. From its side it looks  completely flat and as though it only has one wall. Also known as the Witch’s House, you’ll find the house with one wall at Vorontsovsky Lane. Stand on the circle opposite to see the illusion.

From the Russian Orthodox church of St. Panteleimon, to the Venetian-style Odessa Philharmonic Theatre there are so many photo opportunities here. Even the main post office which was built at the end of the 19th century is beautiful to look at inside. 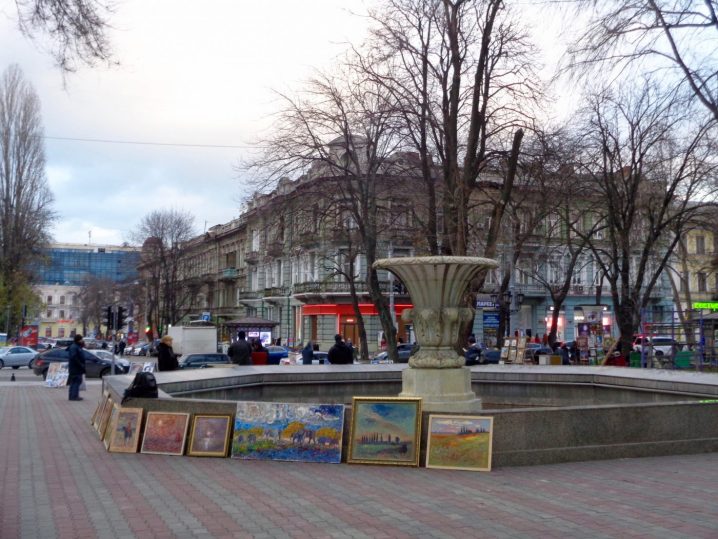 If you are travelling in Ukraine and not able to make it all the way to Lviv, a city in western Ukraine known for its chocolate, you can bring Lviv to you at the Lviv Chocolate Shop. This handmade shop has everything from lavender chocolate to homemade chocolate gift sets – perfect for taking home as presents. 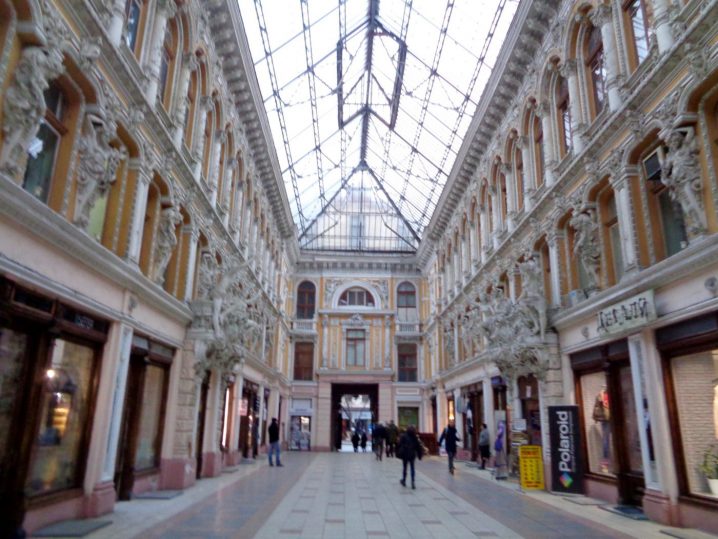 If you are watching your figure, then maybe you’ll prefer some of the local artwork instead. You’ll often find local artists at the fountain displaying their landscape and other artwork for sale.  Although it is a cheap country, if you decide to shop, the clothes and shoes aren’t that cheap in comparison to everything else but it’s worth looking around the malls such as Europa.

For souvenirs head to the underground passages near the train station to find cheap gifts amongst the labyrinth of stalls. The most expensive shops here are at Passage, where you’ll find the luxury brands on the first floor – a nice place to window shop. 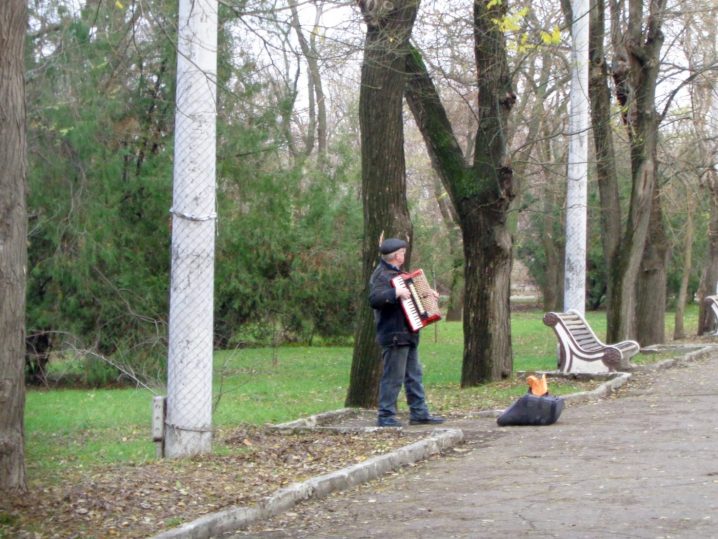 From accordion players in the park to DJ sets in the bar. There’s plenty of music to listen to  in Odessa. If you prefer to be outside for some tunes, you’ll often find musicians playing within the city centre at night. Central Park hold concerts in the summer so if you visit during this time check the listings to see whats on.

But… if you do want to ‘party like a Russian', there really is no better spot to do it. Get yourself down to Arcadia which is right on the water for Ukraine’s very own Vegas. 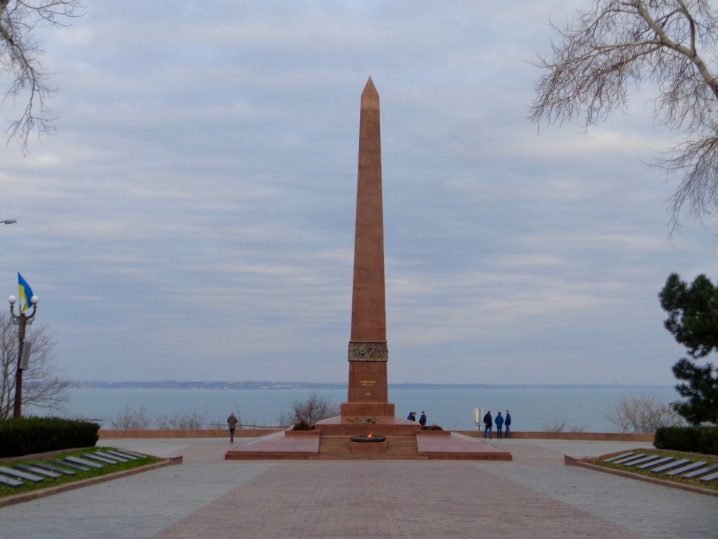 Where to Stay in Odessa

I stayed at Friday Hostel Odessa. It was honestly one of the best hostels that I have ever stayed in. It was walking distance from the train station and really sociable. I met some people to explore the nightlife with and even met someone else who was taking the same overnight train to Kiev. The common area is great and the Wifi is good. The whole place is so clean and there are plenty of showers and toilets. The staff also speak a bit of English making it easier for me knowing no Russian. It cost me €15 for 3 nights in a 7 bed dorm which I had to myself for the first night. 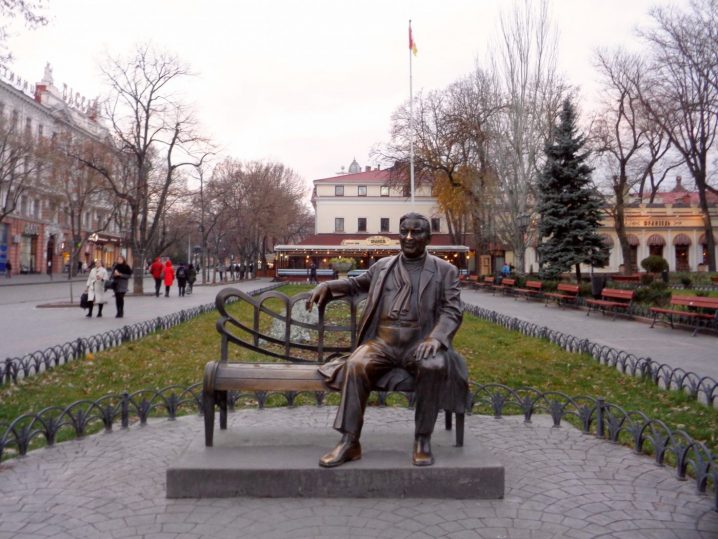 Getting To and From Odessa

I travelled from Tiraspol in Transnistria to Odessa on an old Soviet train. The train left Tiraspol at 09.44 and arrived in Odessa at 12.25. The train cost £6.00 one way and I booked my ticket through Tutu.Travel.

From Odessa I travelled to Kiev on the night train. Again this was an old Soviet train. The train left Odessa at 22.25 and arrived in Kiev at 07.10 the next morning. It cost £12 and I booked it through Booking.uz.gov.ua.

If you want to take a walking tour to get your bearings – Odessa by Locals is a free walking tour where you pay a donation at the end. I took this tour and found it really informative. 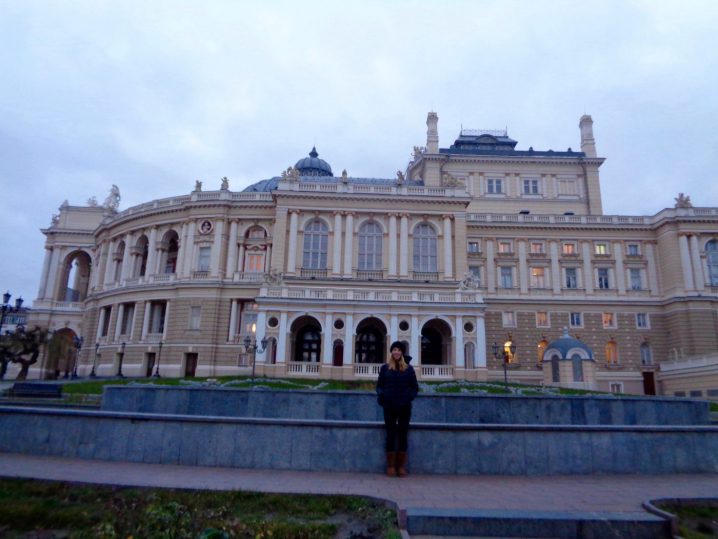 How good is Odessa for solos? I spent 4 days in Odessa and loved it. I walked around freely in the day solo but went out at night with others. You do need to be careful crossing the roads so use the underpasses instead. There are pickpockets at the railway station at night so keep an eye on your belongings. Taxis don’t have the safest reputation so download Uber to get around the city to be safer.