Feeding reindeer in Norway is such a humbling, magical experience. If you've ever wanted to experience reindeer feeding and learn about the Sami culture, Tromso in the Arctic Circle is a great place to do it. Here's my experience to inspire you.

I looked in amazement at the scene before me, a scene that resembled something from a Lapland movie. A herd of reindeer standing in front of me with a backdrop of a pink sky. I reached out my hand as one approached me, its friendly demeanour instantly putting me at ease.

I couldn’t believe I was surrounded by reindeer, to be able to look in their soft brown eyes, and gently touch their fur. They seemed so placid and gentle. The reindeer’s soft fuzzy-looking nose gently began to nudge at my bucket, munching away on the food I had brought for it to feast on. 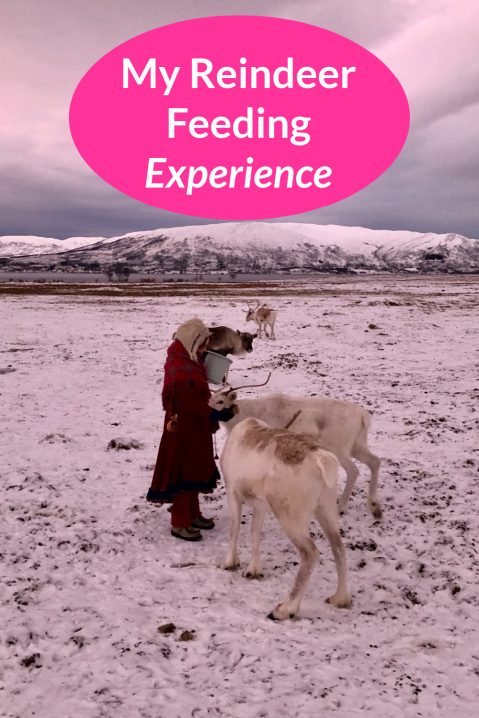 Within a few seconds another approached. A bit wary at first but seeing how the other one was tucking in, it picked up the courage to follow in its footsteps and stood there in all its soft furry reindeer glory, patiently waiting to be fed.

Then a larger reindeer came along and pushed the one feeding out of the way with its hooves, putting so much pressure on my bucket that I had to put it down. Its antlers towering over its head precariously aiming in my direction. I squealed, put the bucket down and edged back slowly scared of being struck in the face accidentally by a pregnant reindeer. 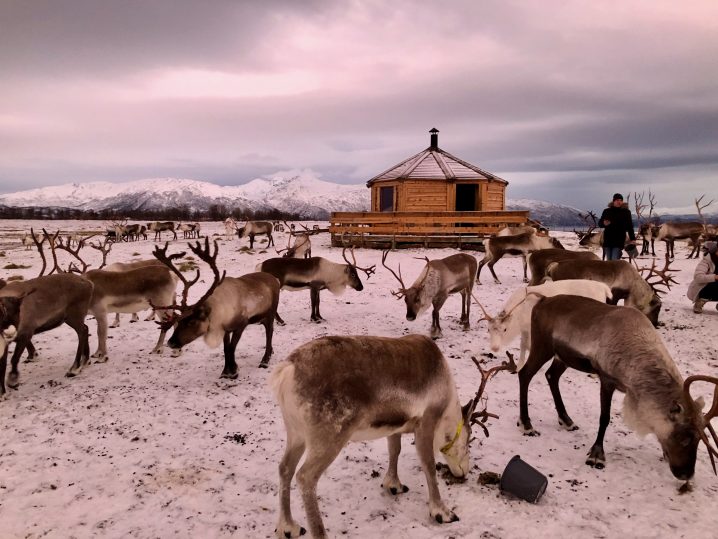 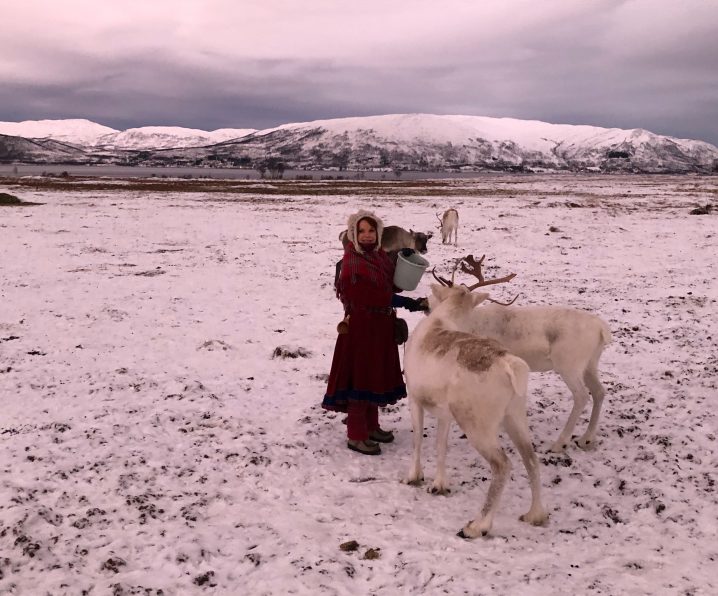 “This one’s my favourite,” said Lone, the Sami guide, looking like a Norwegian red riding hood and pointing to the whitest reindeer there.

Thinking that she was referring to a male reindeer with its antlers, I later learned that it was only the female reindeers that carried antlers in the winter, to protect them during pregnancy.

Autumn is the mating season and for a whole month, each male fights to protect its harem of 70 females. Going without food and even water for the whole time, until they are tired and exhausted. Their antlers loosen and fall off and the females don’t entertain them again until they grow back. You can tell the difference between the sexes when their antlers return as the females grow up, and the male’s grow in a circular shape. Some of the reindeer only has one, which indicates that they are a boy. 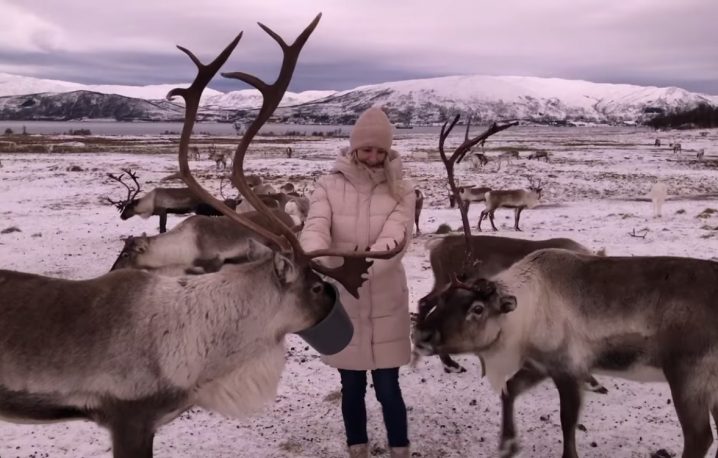 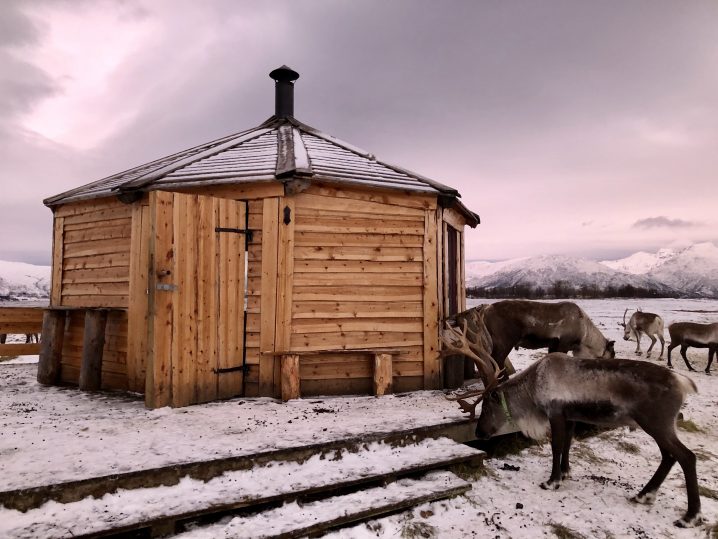 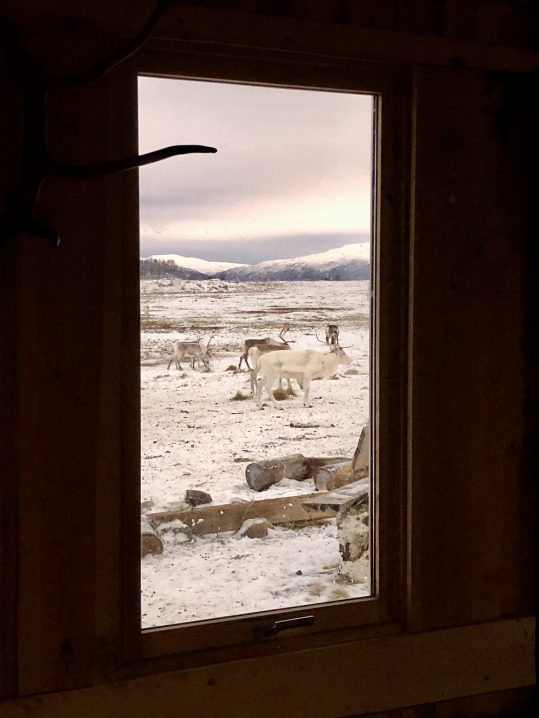 I watched the Sami lady as she looked completely at peace with the reindeer. But this red-clothed reindeer herder was not as soft as she looked. “Find me in the forest and I’m carrying three knives, all different lengths,” she says. “If a reindeer gets caught in a fence, it can struggle and hang itself. That’s why I carry a knife. And to open my coffee bag, of course!” She points to a red woollen bag hanging from her belt, that is one of the first items they are shown to make as they get old enough.

There are nearly 40 reindeer here, but the farm is large enough to accommodate 360. And that doesn’t stop reindeer queuing up outside the fence wanting to experience this reindeer holiday camp that opened five years previous.

Four hundred reindeer live in the surrounding mountains but climate change and an increase in predators has resulted in a decrease in the reindeer population. That’s where the reindeer camp came in. This ‘sedar’ (camp in Sami language), is a safe haven for reindeer who are specifically chosen by the Sami tribe to rest here in the winter. Apparently some of them don’t ever leave!

Using snow mobiles to reach the herd in the mountains, the reindeers are marked in their ears and health checked before being selected for the camp. 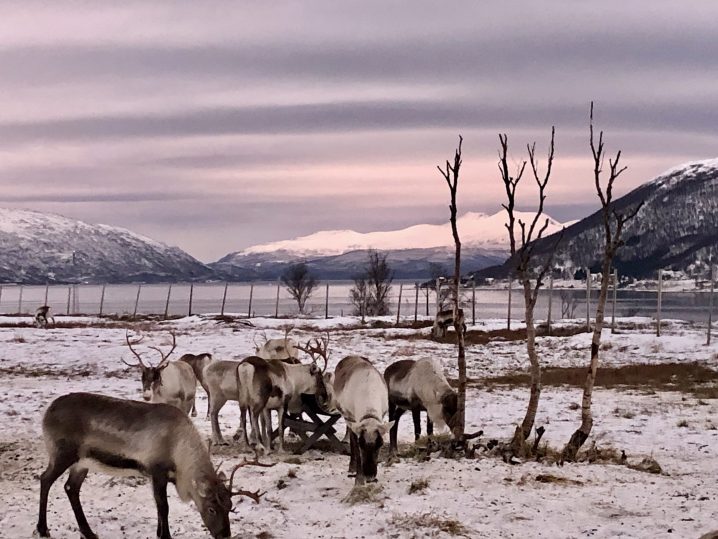 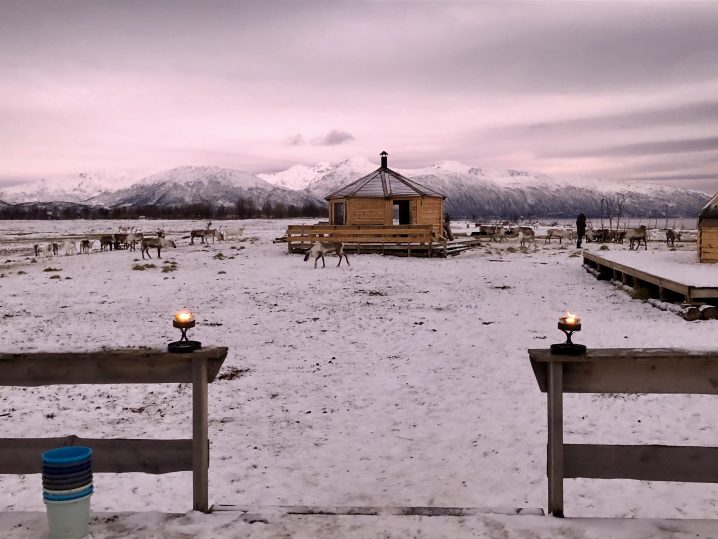 As soon as they come in here, they know they are safe,” she says. There are no predators, just food, shelter and love. Once they go, you see the wild glint in their eye as they revert back to their survival instinct where they don’t even allow humans to come anywhere near them.”

I sat by the bonfire, watching these gentle animals going about their daily lives, feeling barbaric for the lunch that I was waiting to eat. Reindeer stew was apparently on the menu. A dish known as ‘Bidos’, that was meant to be lean with only 20% fat and full of antioxidants.

I had missed the opportunity to raise my hand when they had asked if anyone was vegetarian, so reindeer stew it was, but to have had the humbling experience of feeding one of these animals then eating one, wasn’t sitting that well with me. Knowing that the reindeer meat was from another herd and not from this farm eased the guilt slightly. “It’s one of the best meats you can eat,” we were told. And to be fair, it was. 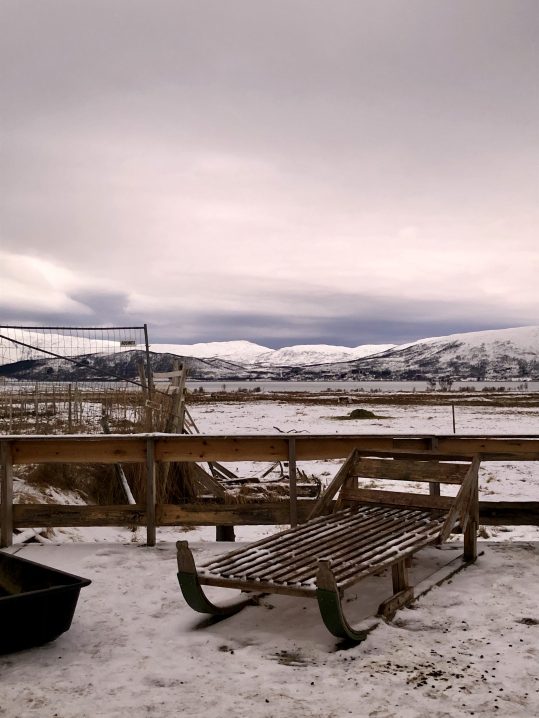 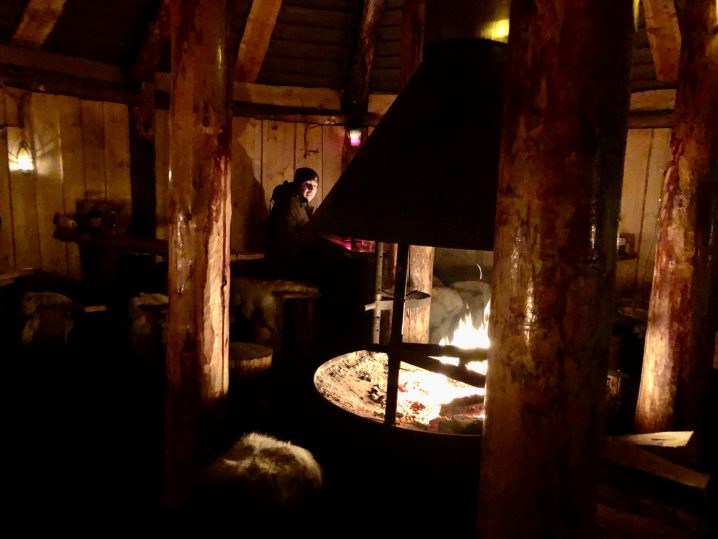 Inside a lavos, waiting for a hot drink and reindeer stew

I was here to experience reindeer sledging but it was too dangerous as the fjord hadn’t yet frozen over. Instead I was offered reindeer feeding and a chance to learn more about the Sami tribe. An experience that had been on my travel wish list. I had heard about this indigenous reindeer tribe who were spread across Norway, Sweden, Finland and Russia, with a population of 128,000 Samis. An indigenous tribe that has 250 words in their vocabulary for snow conditions and 150 words to describe a reindeer.

And now I was sitting in front of one, and learning about the Sami culture as the flames of the fire danced around her small silhouette.

I admire her costume, called a ‘Gati,’ an outfit that can keep her warm in temperatures of minus 25 degrees Celsius. It measures 13 metres long and can be pulled down completely to prevent any wind or rain from getting underneath it. You can tell a lot from a Sami’s outfit. The design on the back indicates the family name, the front where they are from (she’s from the north of Norway) and the buttons on the belt whether they are single or married (square buttons mean they are married). 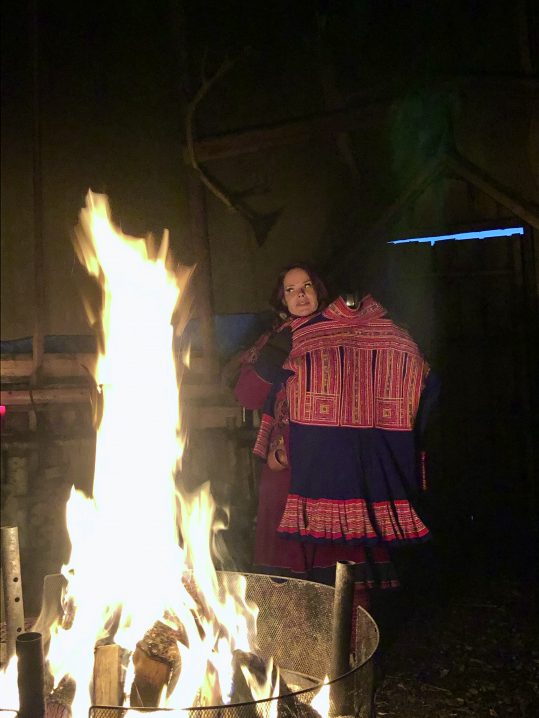 The Sami ‘Armani' suit for weddings

“We have up to 2000 people at our weddings,” she said proudly, prompting me to think about the current pandemic restrictions and wondering how they would cope if they had to reduce their wedding guest list to under 30 people. My attention was brought back into the room as she showed us the traditional wedding hat and ‘disco’ necklace that the brides wore. “In fact weddings are so big that we have our own wedding planners!”

When a man proposes, he presents his new fiancé with a chest of gold or silver jewellery that the woman chooses for her wedding. Sami weddings start on a Friday and finish on a Sunday, with up to 15 reindeers being part of the wedding feast. And Samis have the freedom to marry outside of their culture too.

I rub my hands together to get them warm in front of the fire as she shows us the ‘Star’ hat that the groom wears, before presenting us with the Sami Armani suit, designed specifically for weddings.

Most of their clothes are made from wool, supplemented by shoes and gloves made from reindeer fur. Temperatures can get down to minus 40 degrees and being outside for 18 hours a day meant that materials that provided good insulation was key. 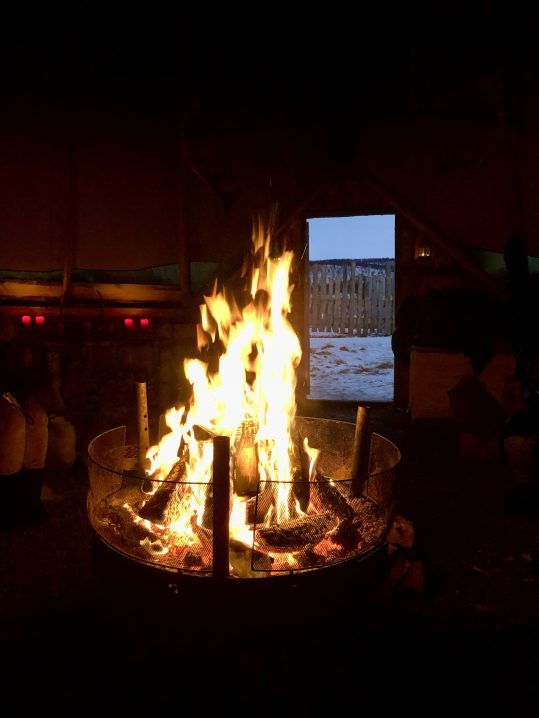 At a young age, her grandma taught her how to make reindeer shoes from ‘sena grass.’ A grass that grows by the rivers and goes soft after it’s been cut down and dies. The shoes point up at the toes like a small boat that used to hook onto skis that they used for herding. Nowadays, snow mobiles have made their jobs easier but skis are still used in Russia. With temperatures being so cold, they have to have many survival strategies to be able to live there.

“You don’t mess with the weather when you’re up here,” she says, pointing to her face, before telling us the story of when she had frost bite on her face at the age of 30, and had to have medical surgery to help heal it.

The main practice of the Sami is shamanism (although a few are Christian), and they ask the gods for nature’s permission to be there. Although they no longer use drumming ceremonies for healing, many are clairvoyant and still carry these beliefs. 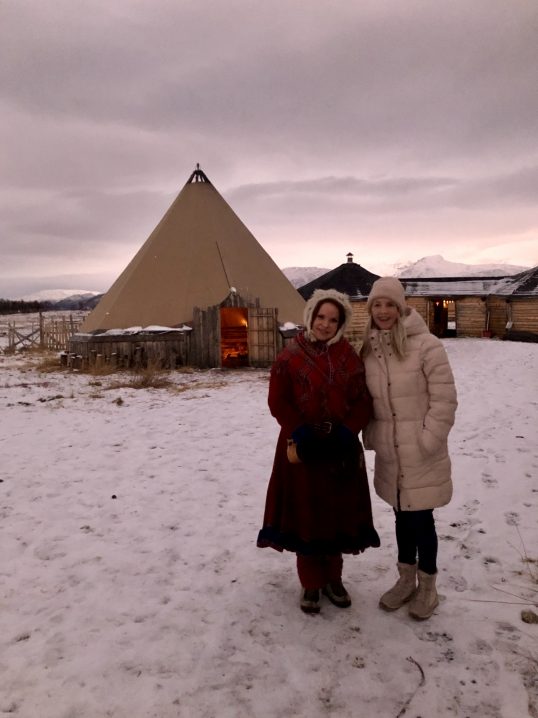 But Shamanism and survival strategies are just part of the Sami culture. A ‘yoke’ is another tradition. It is a Sami song that is sang in a constant loop and personal to every tribe member, and part of their identity. As she sang us a beautiful yoke around the fire, I could see why they called them emotional. In Sami culture, you can never yoke your own yoke.

Lone ended the song with the word ‘Giitu’ meaning ‘thank you’ in Sami. And although the Sami are not bound by time (they go by the reindeer and situations instead of the stress of time), my time here was unfortunately up. I was sad to leave the reindeer, the pink glowing sky, the bonfires and this incredible reindeer herder who I would never see again.

But only after a quick photo with her. To be able to be so close to reindeer and touch their soft fur was such a humbling experience. And, if I was a reindeer, I would definitely book into this reindeer farm, and like some of the females, I may never leave… 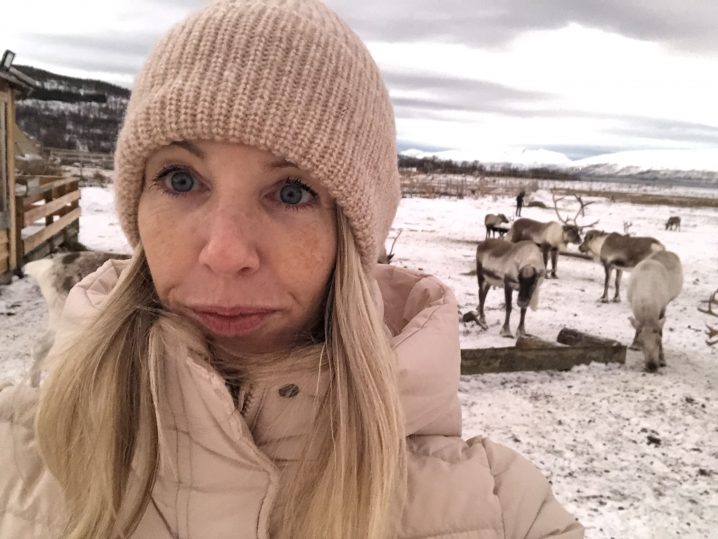 My reindeer feeding experience was booked through Get Your Guide. I had originally booked reindeer sledding in Tromso but due to the lack of snow and the fjord not quite freezing enough to be able to take the sleighs, I was offered reindeer feeding instead. I am so glad that I had this experience and definitely recommend it for anyone wanting to learn about the Sami culture and get a chance to feed these amazing animals. The tour took 4 hours and included lunch and hot drinks. As well as couples I also met another girl who was here solo too. It’s great for solos! 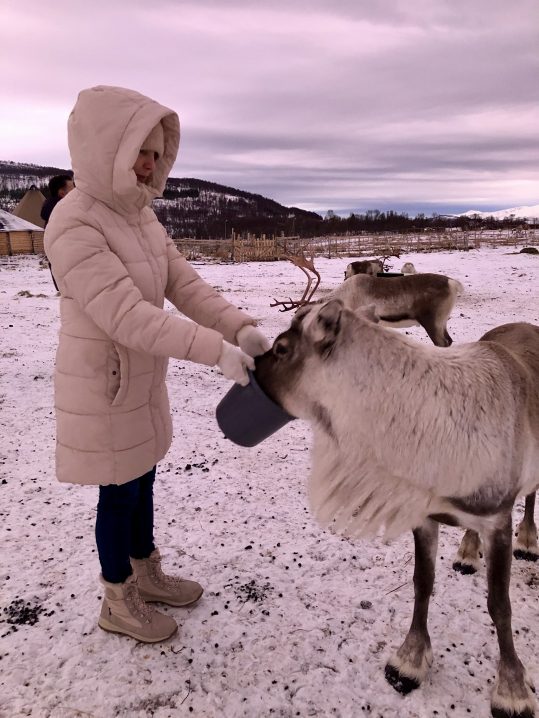