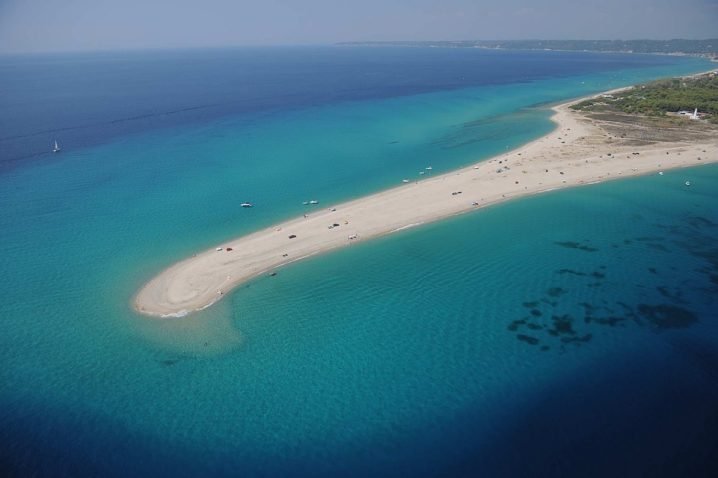 The Mediterranean is a fantastic region to explore if you’re solo. Portugal, Spain, France, Italy and Greece boast Mediterranean shores full of sandy beaches, cosmopolitan rivieras, seaside tavernas and bistros that are worth discovering one at a time.

The Mediterranean may not have turquoise Caribbean waters but it does have destinations such as the Italian and French Riviera, as well as the Greek Tropics. If you’re looking for a summer destination between May to September then Greece is definitely worth considering. It has history, picturesque villages, olive groves and of course, Greek cuisine. Greece is only a short distance from the UK (3.5 hours) so it’s easily reachable, and flights to Greece aren’t that costly.

One of the known Greek tropics is the cluster of Ionian islands or otherwise known as the Heptanese, including the likes of Corfu, Paxos and Antipaxos islands as well as Kefalonia and Zante, while the other is not even an island. It’s a peninsula in the North of Greece called Halkidiki. 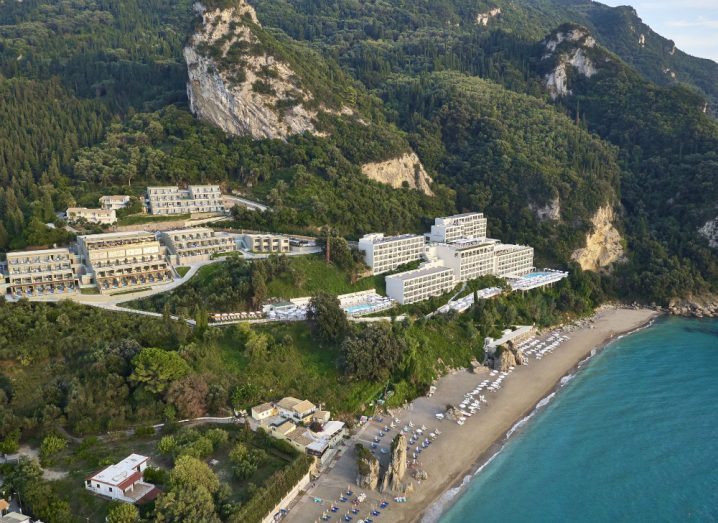 Situated on the eastern side of Greece, amidst the gorgeous Ionian sea, the islands of Corfu, Zante, Kefalonia and the smaller islands of Paxos and Antipaxos are surrounded by the most cyan sea you could ever imagine existing within the Mediterranean basin.

The unofficial capital of the Ionian islands is Corfu, referred to as the ‘emerald lady.’ The reason why the island is called this is because it is extremely verdant with ample vegetation growing on some pretty striking cliffs that pour into the sea. Such is the cliff at Agios Gordios where the Mayor La Grotta Verde Resort is located offering striking sea views of an emerald shore. Corfu is the second largest of the Ionian Islands and is one of the most popular.

An incredibly diverse island, Corfu has a strong cultural side especially if you do a stop over to explore its gorgeous Old Town which is a World Heritage Site. Here is where you can buy Greek statues and souvenirs to take home or just sit in a Greek tavern and people watch.

South of Corfu are the smaller Paxos and Antipaxos islands; true Ionian gems. They are also some of the least commercial too. Paxos is a small island and only 7 miles by 3 miles and is ideal to bike around. Gaios is the capital and is where you’ll find the only nightclub on the island. Small, with Venetian architecture, it attracts many sailboats who come to explore its waterfront bars. The island of Anti-Paxos is even said to rival Caribbean waters with crystal clear and turquoise hues. 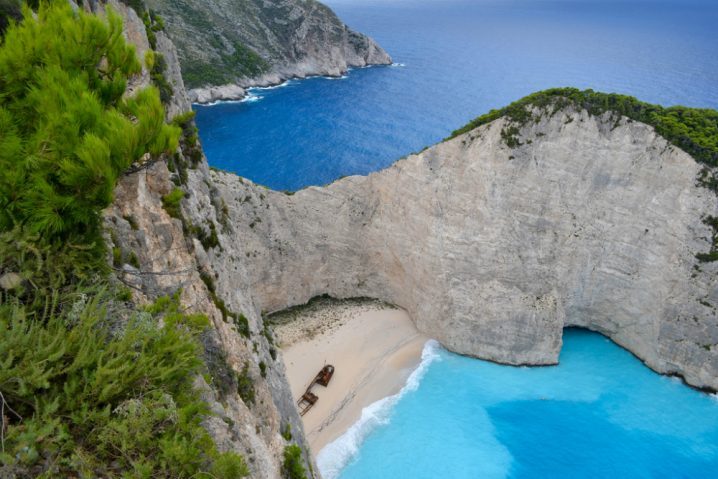 Best explored by sailing excursions, these islands can provide a great day adventure from Corfu. Further down is Kefalonia known for its magnificent Myrtos beach, a world famous beach. The island was also glorified by the novel Captain Corelli’s Mandolin which was later made into a film in 2001. Kefalonia is the largest of the Ionian islands, and has the highest mountain in the region which is covered in black pine. Fiscardo is also a reason to visit here. On the most northern part of the island, Fiscardo is a picturesque, timeless port with 18th century buildings that just oozes charm.

Zante is another popular Ionian island, probably mostly famous for its shipwreck site in Navaio beach, a sandy cove, which was shipwrecked here in 1980. Due to Zante’s popularity with foreigners, the island doesn’t really offer a genuine, local Zante experience. They do have a marine park and the loggerhead sea turtle here too but it is touristy. If you are seeking a more authentic Greek island vibe during your holiday, you should look to stay on one of the nearby islands, and perhaps arrange to visit the island for a day. But, if you like water sports and want to meet others then it’s an ideal place to stay for a few nights. 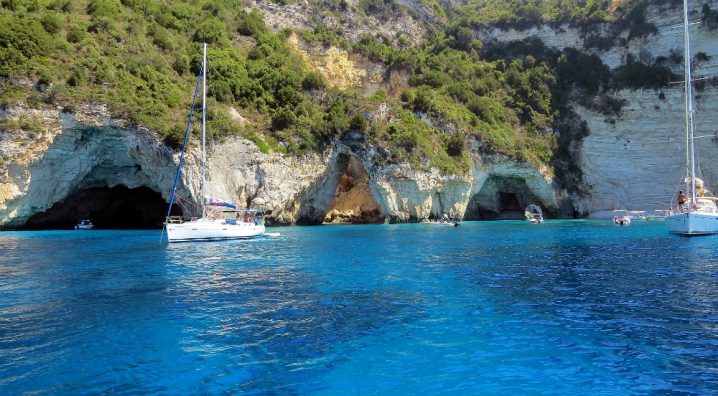 The second Greek tropics destination is the aforementioned Halkidiki. Located next to Greece’s second largest city, Thessaloniki, the peninsula of Halkidiki has the advantage of having three legs as they are called: Kassandra, Sithonia and Mount Athos. These three ‘legs’ create an enormous coastline and in many ways they are reminiscent of islands.

They are blessed with all the great attributes of the islands due to this huge shore surface area that is created, resulting in many sandy beaches and sheltered coves that are caressed by some truly spectacular turquoise waters. Since they are quite popular with the local Greeks themselves, you know that you will be getting a great holiday experience. In fact, the locals say that ‘like Halkidiki, there is no other place’. 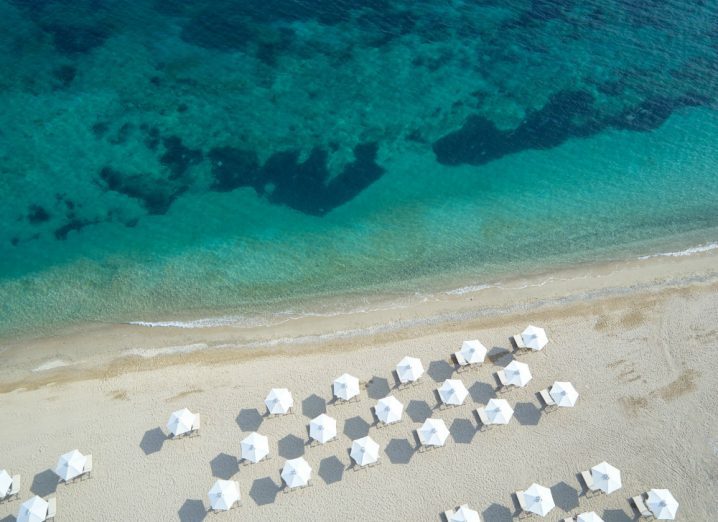 The first leg especially, Kassandra, which is the most developed peninsula with ample nightlife options too, is home to some wonderful beaches, including that of Paliouri. Beautiful azure waters grace the shore of a luxury thermal spa hotel in Halkidiki, on Kassandra’s southernmost tip. This region is also a source of natural springs that the spa hotel has integrated in its various treatments and therapies that are offered at it’s thermal spa in Halkidiki. It’s a great stop for wellness and spa-loving girl about the globes. If you are looking to combine tropic scenic views with a wellness holiday in Greece, then Halkidiki should be at the top of your list.

From there you can choose to visit the other two peninsulas of Sithonia and Mount Athos on a sailing day trip, however, the latter is a place of unique spirituality, home to 20 or so monasteries and can only be observed from a distance at sea. You will not be allowed to disembark as it is considered to be a monastic state and is referred to as a Holy Mountain. Most of the monasteries are operational and this is why the region is protected so that the day to day schedule of the monks is not interrupted. 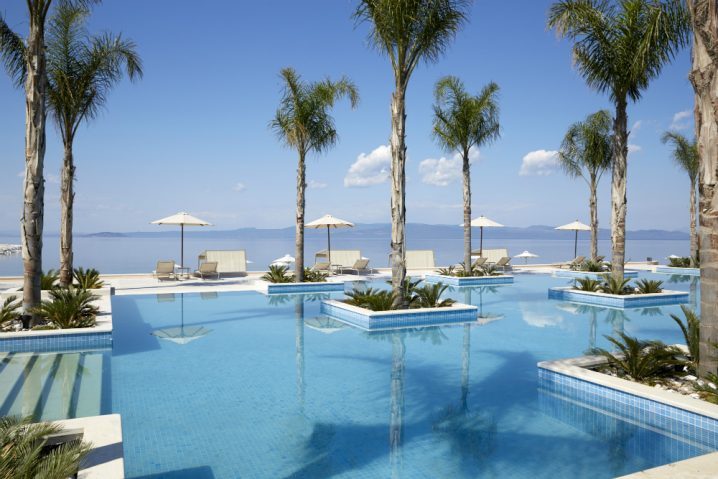 This is just a taster of some of the Greek tropics but there are so many islands to see in Greece and one of the best ways to discover them is to sail around them. You can learn to sail on a private course or join a training yacht to learn. You can’t beat sailing on the open seas especially when you’re the one behind the wheel. 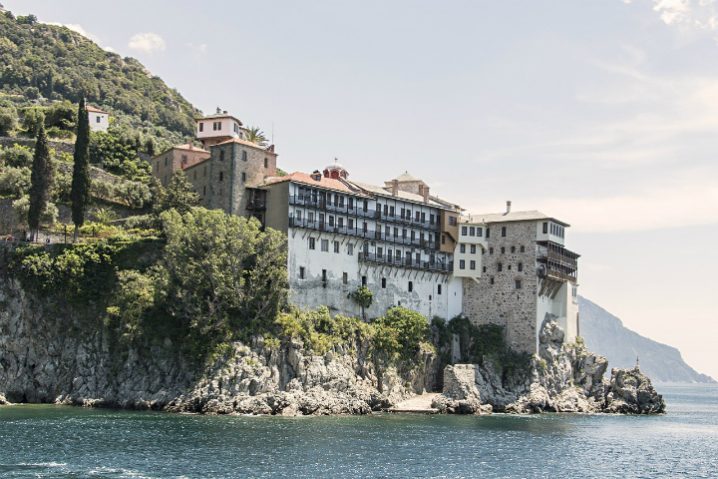