Last month marked a whole year since I had left the Colombian city of Medellin, a city I had called home for 18 months of my life. Since then I have travelled through South America, visited a refugee camp in Lebanon and spent a few days in Andorra. As much as I am adjusting to life in Barcelona (and loving it), I can’t help but miss this South American country.

So as a year’s anniversary passes of moving on from Colombia, I am celebrating my favourite places to visit from the magical city of Medellin. Including my experience at an eco hostel/Spanish school, climbing the rock at Guatape, and zip-lining through lush landscape at Jardin.

If you are planning a trip to Colombia, add one of these day trips to your bucket list. You don’t need to travel further than 2.5 hours to reach them either. 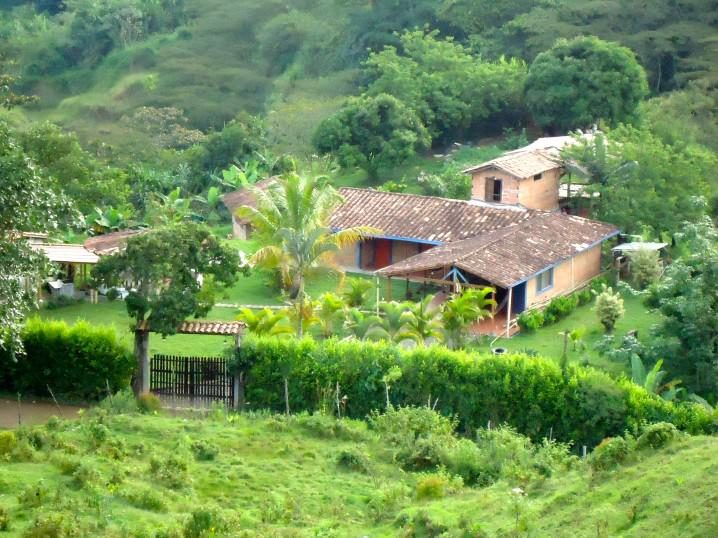 “Donde gringos?” I asked as I jumped off the bus, dusting off my pink backpack. An old man looked straight at me then smiled before hurling my backpack over his shoulder and walking as quickly as he could with a limp across the square, past the town’s residents sitting in front of a church which dominated the square. Children smiled and laughed as they kicked a ball around and it echoed of the brick walls. Just in front of the square was a line of jeeps, and the old man stopped in front of one and threw my bag on the roof, even though it looked as though the heaves were just about to open, then beckoned for me to get in.

“Gracias,” I said as he shuffled off, constantly waving at me from the other side of the street whilst I waited for the jeep to gather more passengers before leaving. It was a slow wait but I guessed that was the way of life here, slow and just being able to ‘be.’ Then the doors slammed shut and we were off, heading along the bumpiest dirt track to the eco hostel where I had planned to stay overnight. Eco Hotel Medellin was just how I had imagined. Everything here was eco and this was my first introduction to permaculture where nothing was wasted. Even litter was stuffed into plastic bottles to create ‘bricks’ for construction later on.

My room was on the second floor, with the most amazing view of the green landscape across the mountains. Hammocks swung gently in the breeze and the sounds of birds echoed from around. This place just oozed peace and instantly I knew that I was going to love my time here. Lunch was a variety of vegetables and unrecognisable products home-grown from the grounds. You could just taste the freshness, and having a communal meal gave me a chance to meet the others that were staying here as well as the resident cat and dog, which the dorm rooms were aptly named after.

There was an option to take part in the gardening and not usually one for being ‘green fingered,’ I was keen to learn more. Armed with a dirty sack and a shovel and donned in rubber gloves, I was sent off to weed the path before heading deep into the forest area to plant a pineapple tree. With hammocks overlooking green fields, morning yoga and organic meals, this eco hostel is just bliss…

Amaga is less than an hour from the city and it is the friendliest town I have come across in Colombia, and one of the cheapest. A night at Eco Hostel Medellin is the best way to unwind, and they offer volunteering packages in exchange for Spanish lessons. It really is a little oasis. 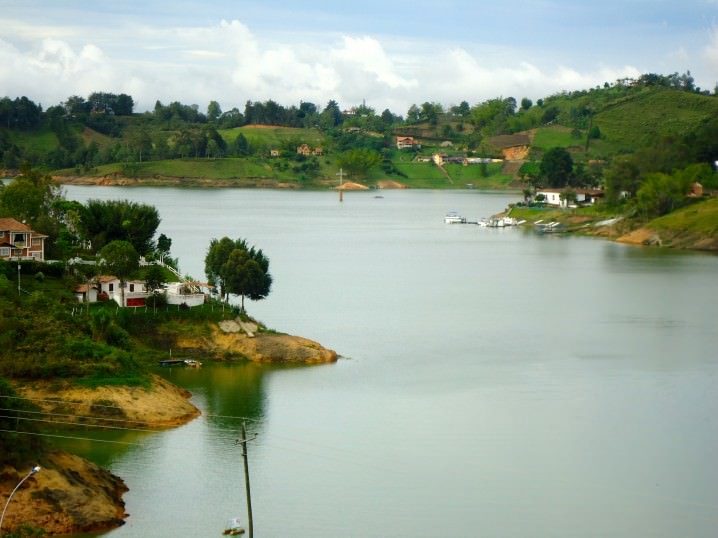 The stairs were getting narrower and I squashed myself against the wall to allow others to pass on their descent. I was nearly there. Step 600-and-something was just around the corner and I was on the final stretch. Admittedly I had lost count just after 100 as I had stopped for various breaks trying to get the perfect snapshot of the view below. Now it was within my grasp and as I reached the top of the rock, the most breathtaking view opened up to me. This was Guatape.

Created by a hydroelectric dam back in the 1970’s, this once hilly landscape has been transformed into an island view, and the best place to see it’s stunning view is on top of La Piedra del Penol. Entry to the top is 12,000 pesos, and there are plenty of souvenir shops on the way up, to break up the relatively easy climb that took less than 30 minutes to get to the top. Getting down is even quicker, and once I was back on ground level, we were off to visit some decorative wall art in nearby Guatape, a colourful town where even the poorer area has been transformed into a living piece of art in vibrant colours.

After a perfect photo opportunity, it was time to jump back in the car for the journey to Old Penol, just 30 minutes down the road to learn more about the area’s history. Old Penol doesn’t actually exist anymore as it was flooded to make way for the dam. All I could see was a church steeple which rises out of its watery grave, a spooky reminder of what lays beneath. This town is so small that it only took a few minutes to explore, and it was free.

From here, it was a short ride to Penol, (unlike Old Penol this town does exist). It appears to be the place where locals come on the weekends on one of their many bank holidays as the place was swarming with families, queuing up for the boat cruises and people whizzing past on the zip line across the water’s edge. I had heard that the food here was meant to be superb, and as I sampled a lunch of barbecued trout which just melted in my mouth, I definitely agree. 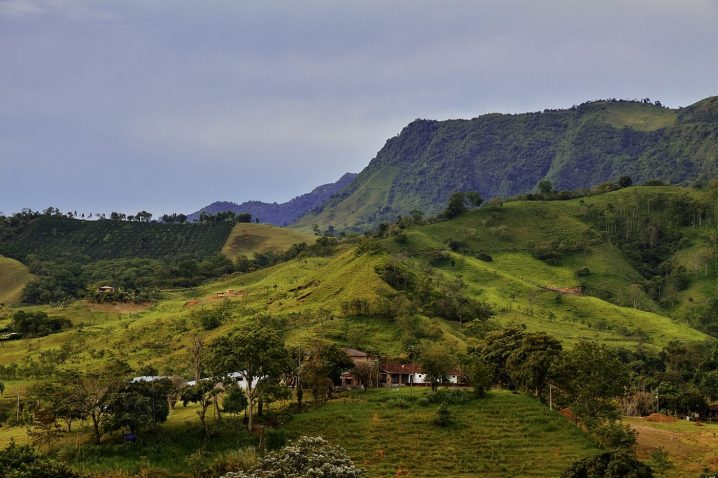 As the ground rushed past me, I held on tightly listening to the ‘whizz’ of the zip line as it headed towards a wooded platform, hidden at first by the lush greenery that was common in this town. I guess that was why it had been aptly named ‘Jardin,’ Spanish for garden, as a garden it definitely was, and this Garden of Eden had the most stunning mountain views with colourful flowers and green landscapes.

I was taking part in one of the adventure sports in the area, although not as adventurous as some who rappel themselves down a waterfall into a dark cave, submerging themselves in the water below, it was more on the side for those who fancied dipping their toes in adventure. And then, as everything that goes up has to come back down. It was my time to lower myself back to Earth (literally). As I gently spun around the piece of rope, I felt my feet touch the floor and breathed a sigh of relief.

For those seeking some adrenalin adventure, if you don’t fancy throwing yourself from the mountains in the name of paragliding over the city (it’s meant to be one of the cheapest places to do it), then take a visit to Jardin instead. Only three hours from Medellin, this is  the place for adventure and flower lovers. It’s one of the most beautiful in Colombia, and with so much nature, it is the perfect respite from the city. Rappelling costs from 25,000 pesos and you get to zip line down it after! 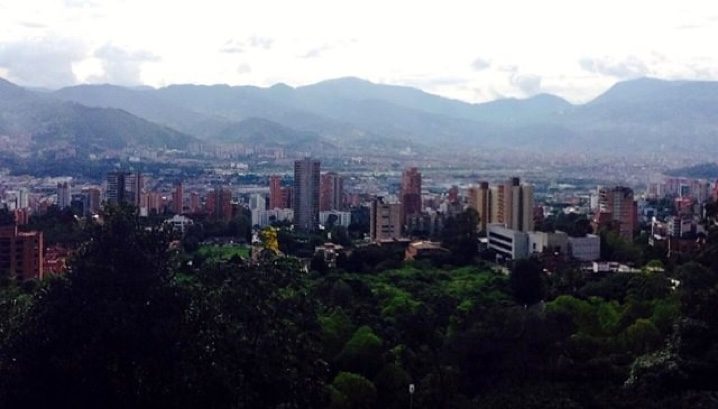 I didn't have to go far to see a completely different side of Colombia just outside of Medellin. I travelled by car to Jardin and Guatape, and it’s easy to get to Amaga by bus which departs from Terminal del Norte and passes through El Penol and Le Piedra (the rock) on the way. Check the Rome2Rio website for transport to each place.