Ever stared a prehistoric monster in the eye? Well, neither have I, but I got rather close to a pair of beady little eyes belonging to a Belizean crocodile.

When I checked into the Black Orchid Resort just thirty minutes from Belize City, I didn't expect to be invited on a crocodile expedition at night. Armed with my flashlight, the manager of the hotel and a small boat, we left the dock looking for these prehistoric beasts.

With no one else around and only the sound of crickets for company, we scoured the banks of the river, the lights of our torches crossing over like a search and rescue vehicle as we lit up the river bank.

‘The crocs know we're coming,' teased the manager slowing the boat down at a certain spot. ‘They're very territorial and don't stray far.' He turned the engine off and we sat waiting, hoping for a glimpse of one he had seen on the bank earlier.

‘Come on crocodile,' I whispered, desperate to catch a glimpse of one in the dark of the night.

‘See it?' he flashed as I shone my torch on his spot. Two dots of light flashed back at me then I head a splash and saw a long tail submerge into the water.

‘They're quick!' I exclaimed, excited at seeing into the eyes of a Morelet crocodile which are native to Mexico, Belize and Guatemala and also known as the Mexican crocodile. These scaly little creatures only grow to three metres in length and are actually an endangered species.

‘That was just a baby,' he said. ‘The older ones are wise and stay under the water away from the flashlight but the babies are more inquisitive. We'll be lucky if he surfaces again.' 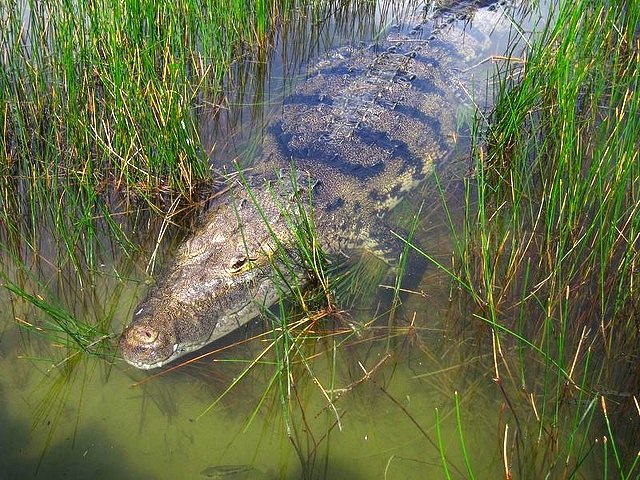 There is something both eerie and mysterious about searching for crocs in the dark: the anticipation, the concentration and the excitement of thinking you've spotted one, to realise that it was just a false alarm.

After an hour of searching we turned off the engine and gently floated back downstream to the resort; relaxing in the solitude that the river brings with the stars shining down lighting the way.

My torch and my hope of seeing another one were fading but at least I got to spot one and I'm pretty sure that there were many more staring at me from afar but my beady little eyes just couldn't see them!