I awoke to a huge thud. Then a small scratching sound.

I lay there still, rigid with fear, my ears on full alert wondering where the source of the noise was coming from. It was pitch black and my eyes couldn't adjust to the darkness around me.

My instinct was to reach for my torch but my arms were cocooned in my sleeping bag. I wanted to wake my Russian roomie but I couldn't make a sound. Frozen in the thought that a Crocroach had just landed in our tent. (A crocroach is the daddy of all cockroaches; half crab/half crokcroach, it flies like a ball and would do Some serious damage if it hit you.)

But the tent was like Fort Knox and nothing was getting past the barracaded door – I was taking no chances. I slipped deeper into my bag so only my face was exposed.

‘Whatever it was, it definately was not getting in here,' I thought to myself as I tried to switch of the sound and get some well needed sleep. 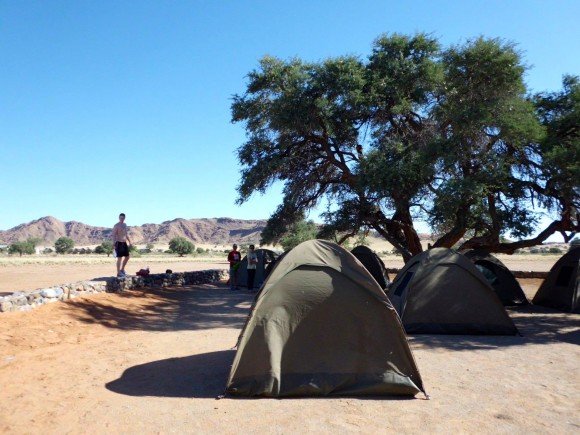 This was my first night within the Nambia Desert. We had waved goodbye to the civilisation of South Africa and welcomed the scenic landscape of Namibia. The only downside to this spectacular country were the creatures which inhabited this dry desert – amptly named Namib, meaning empty.

And empty it was, just desert, a few shrubs and then, even more desert. We had sampled the crisp fruity wines of the Capelands; swam in the Orange River which borders South Africa and neighbouring Namibia; and had witnessed our first sunset over Fish River Canyon (the world's second largest canyon.) Now, we had set up camp by the lights of the milky way and were miles from anywhere with just creeply crawlies for company.

I had congratulated myself for taking a shower, dodging flying beetles and felt a sense of relief when I closed the door on my flying foes, only to be greeted by a half scorpion/half spider (what is it with these mutants?) leisurely roaming around the shower block.

I never knew such insects even existed.

This was real Africa.

I was now on their territory and I have never tread so carefully in my life; jumping at everything that moved or landed on me. Now I know, just how Sunita felt in the jungle. But at least, I can zip up my tent at night and keep the monsterous bugs at bay (if only just for a few hours). 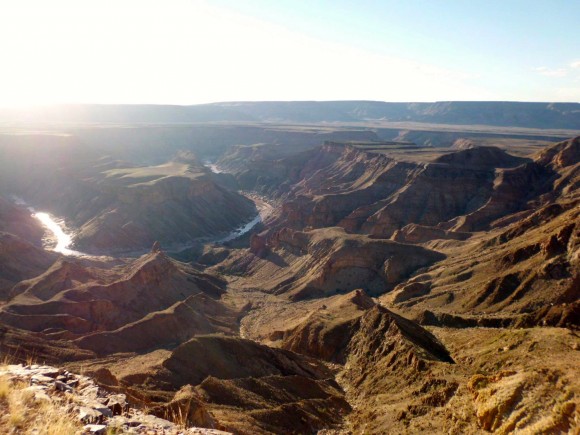 Fish Canyon River – the second largest canyon in the world

If you're looking to travel to Namibia as a solo traveller, read the Solo Travel in Namibia guide for inspiration.