Everyone has heard of the Titanic but if you are like me, you may not have realised that the Titanic was actually built in Belfast. You may not know that the Titanic was one of three super liners to have been built at the time, and you may not know that one of its sister ships came to the rescue of the lifeboats and saved the survivors. If you are visiting Belfast in Ireland, below is my guide for the Belfast Museum Titanic Experience. Just click on the relevant section or read the whole article. 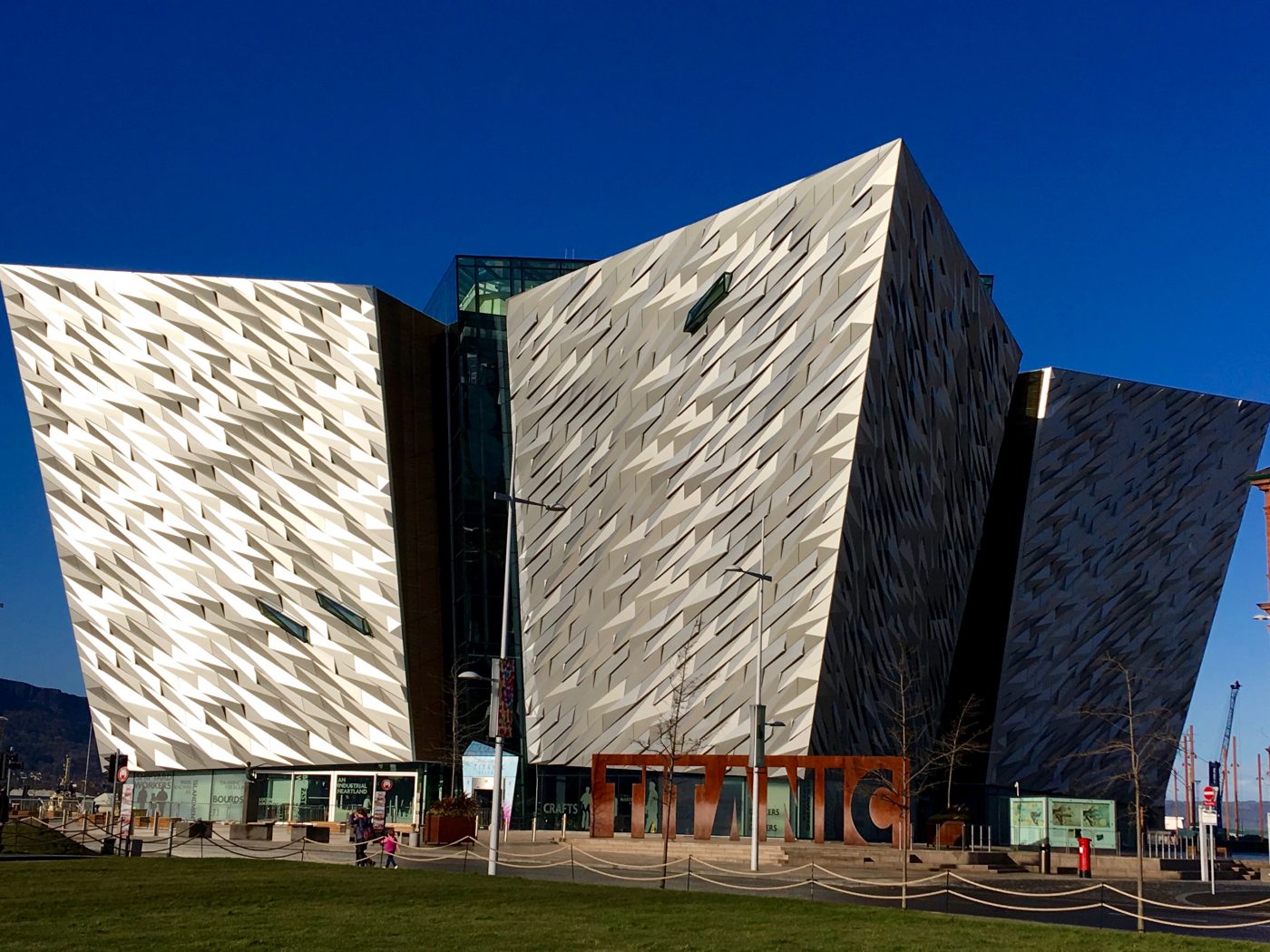 There is a reason that the Titanic Museum Belfast has been named one of the World’s Best Tourist Attractions. Opened in 2012 to mark the 100 year anniversary of the Titanic setting sail, the exhibition is over nine galleries and takes you on a maritime journey. The building was designed to reflect the city’s shipbuilding history and is impressive in itself.

The Titanic visitor experience is interactive and takes you on an amazing journey from the very beginnings of the Titanic to its launch, culminating with the Titanic as it is today. 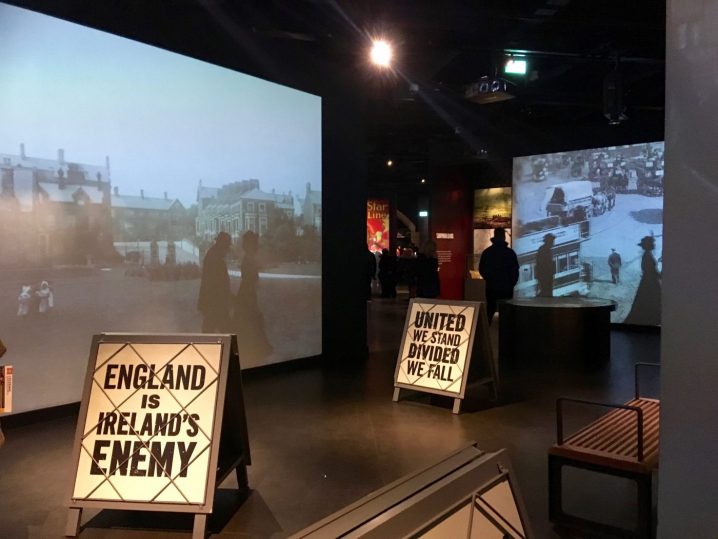 What I really like about this museum is that it takes you back to the days before the Titanic sailed; back to Boomtown Belfast in the beginning of the 20th century. It tells a chronological narrative from Edwardian Belfast when shipbuilding was at its height. Billboards display the wording ‘England is Ireland’s enemy,’ whilst cleverly presented silhouettes give the illusion that you have stepped back in time.

You can even explore the Drawing Offices where the Titanic and the other super liners were designed. There are meant to be Maritime metaphors within the design. Take the hour-long Discovery Tour to find out where they are hidden.

The Shipyard ride gives you an insight into the shipbuilders lives during the Titanic years. Just hop aboard the mini rollercoaster that takes you up and around a scale replica of the Titanic’s rudder. The ride is cleverly brought to life with images and sounds of the shipyard. From here you can get a sense of how big the Titanic really was. 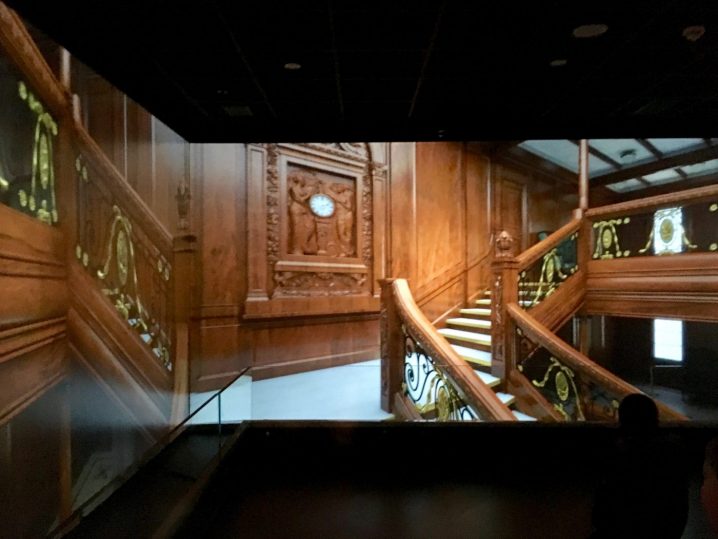 The Fit-Out gallery has a cinematic approach and takes you on a 360 degree tour of all levels of the ship from the bridge to the engine rooms. Remember that famous grand staircase of the Titanic blockbuster? You can watch as the camera sweeps down the staircase and into the opulent interior of first class. Just stand in front of the screen and be taken on a journey inside the ship’s interior. 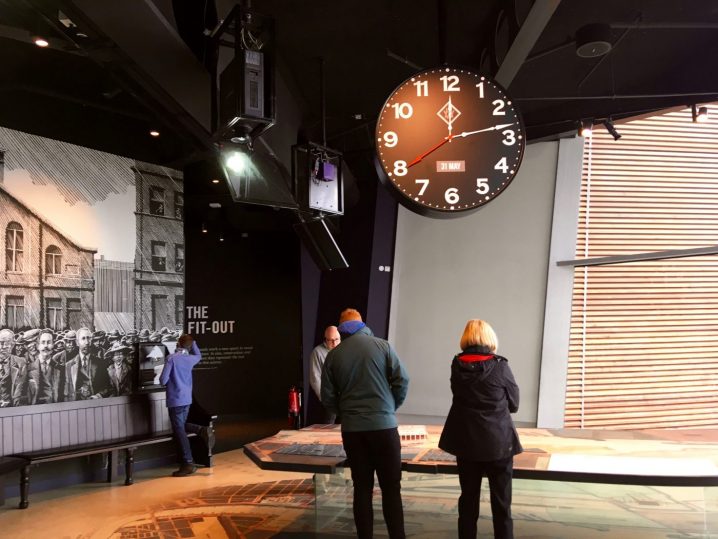 Launch of The Titanic

RMS Titanic was launched on 31st May 1911. A clock in the Belfast Titanic centre stands displaying the exact time of the launch as you look out over the slipway where it disembarked for the very first time. Looking through the glass at the dockyard you can just imagine the atmosphere amongst the 100,000 people who had turned out to watch one of the most famous ships in the world set sail. It’s a poignant moment. 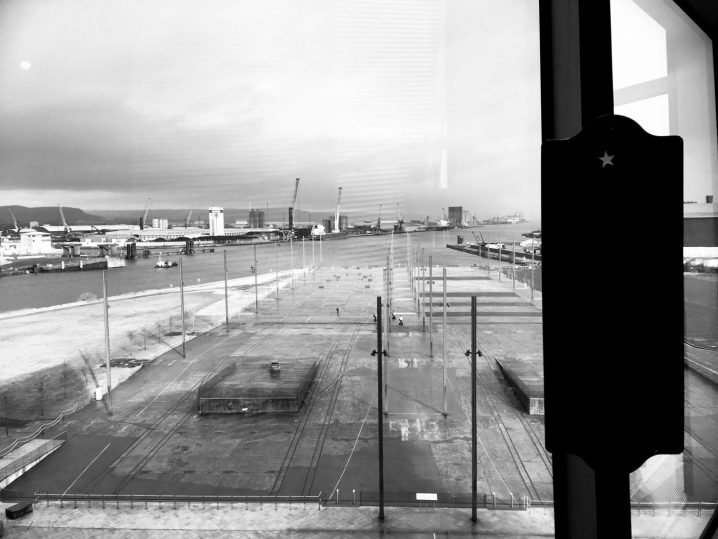 Where the Titanic set sail

Having grown up near Southampton on the south coast of England, I had come full circle with my Titanic journey. Being here at the Titanic Museum Ireland had made my journey more poignant and all the pieces of the puzzle had now come together. 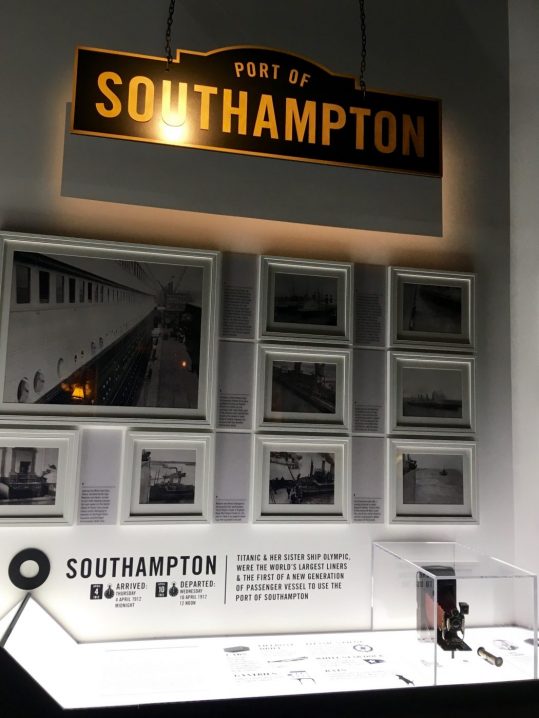 The Titanic's maiden voyage from Southampton

The Sinking of The Titanic

It was on 14/15th April in 1912 that the Titanic hit an iceberg and sank. The sixth gallery aptly named ‘The Sinking,’ shows the confusing news reports of that fateful day amid British and American portrayals of the disaster. This part of the exhibition is very moving as you hear the audio of the survivors on that fateful day. Another interactive screen shows you the crew and passenger lists.

It was reported that 706 survivors were rescued. There is a full-size replica of one of the lifeboats used in ‘The Aftermath’ gallery. Find out what happened to the other White Star super liners after the Titanic here too. 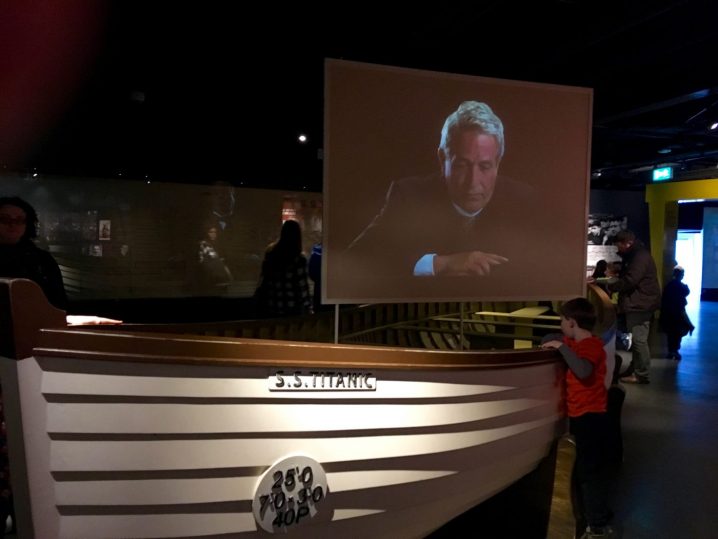 A replica of a lifeboat used for the rescue

The Titanic remains the most famous shipwreck in history and although James Cameron wrote the biggest blockbuster about it, there were other films, plays and books written about the Titanic which are shown in the Myths & Legends room.

Walking around the Belfast Titanic Museum gives you such an education. Each room takes you on a journey from the beginning until the very end and is cleverly laid out.

The exhibition concludes with ‘Titanic Beneath’ – showing this famous ship today as she lay 12,000 feet under the water. Through a glass floor you can see the wreck as the camera pans over her watery grave. I can’t describe the feeling of seeing the Titanic under the glass beneath you, as you travel to the depths of the ocean. You can even watch the current explorations from the discover of the wreck of Titanic, Dr Robert Ballard, through live links.

The special effects, the working shipyard and the interactive galleries all bring this famous ship to life in Belfast, where the birth of the world’s famous ship once began. 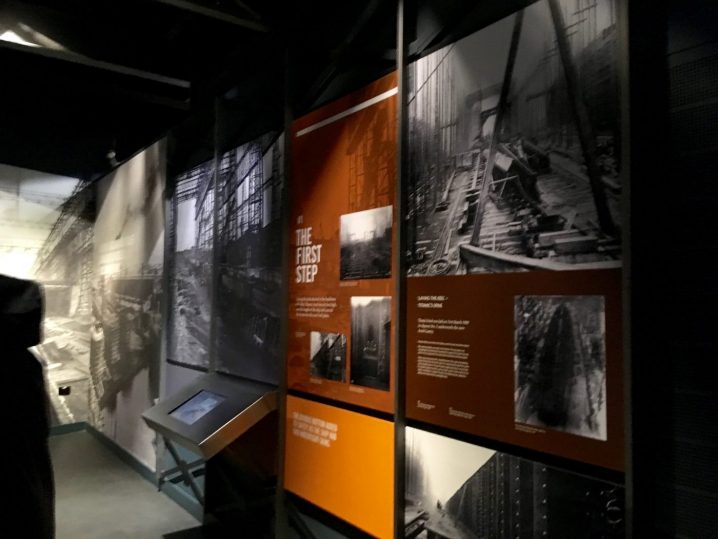 Titanic Belfast is open all year except during the Christmas period of 24th to 26th December. During the summer season between June to August it has extended closing times so you have more time to enjoy the visitor attraction and museum.

Here are the opening hours:

Buy your ticket for the visitor experience at least 1 hour 45 minutes before the museum is due to close. If you do decide to visit SS Nomadic which is included on your ticket check the closing times in case they are different from Titanic Belfast.

Titanic Museum Ireland isn’t the only place to learn about the Titanic (although it is the only Titanic museum in Belfast, Ireland). The Merseyside Maritime Museum in Liverpool has an exhibit on the Titanic and Liverpool: the untold story. It is situated at the Royal Albert Dock. 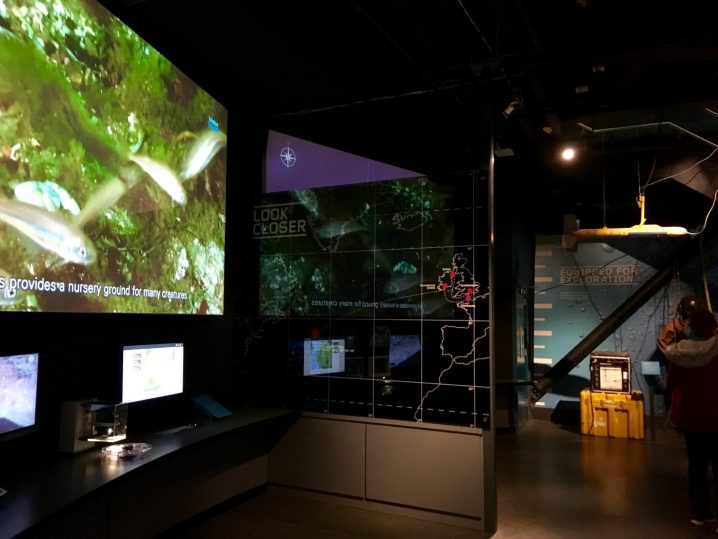 You can either buy your Titanic Museum tickets inside the building or online before you go. Buying online guarantees you a ticket and allows you to skip the crowds.

Tickets cost £18.50 for an adult ticket. There is also a Titanic Belfast student discount for just £15 from Monday to Friday. The discount also applies for seniors (over 60) or if you are unemployed.

If you are staying in Belfast for a while you may want to get a combination ticket such as the Titanic Belfast Experience and Open-Top City Tour to see the city sights. This allows you entry into the Titanic Experience as well as a 48 hour hop-on hop-off city bus pass.

Even if you are staying in Dublin you can still visit on a full day tour to Belfast. The 11 hour tour includes the express train from Dublin to Belfast, a hop-on hop-off city tour and access to the shipyard of the Titanic Quarter.

I definitely recommend going as early as you can to avoid the crowds. Make sure you grab an audio guide and self-guide your way around. Media guides are £3 and can be purchased at the Visitor Services desk. They provide more information than the displays in the museum and are available in English, French, Spanish, German, Italian, Mandarin, and Polish.

Even if maritime history doesn’t really interest you, you could easily spend 2-3 hours here learning more about Belfast and why it was a thriving city. Read here for more Titanic Belfast reviews. 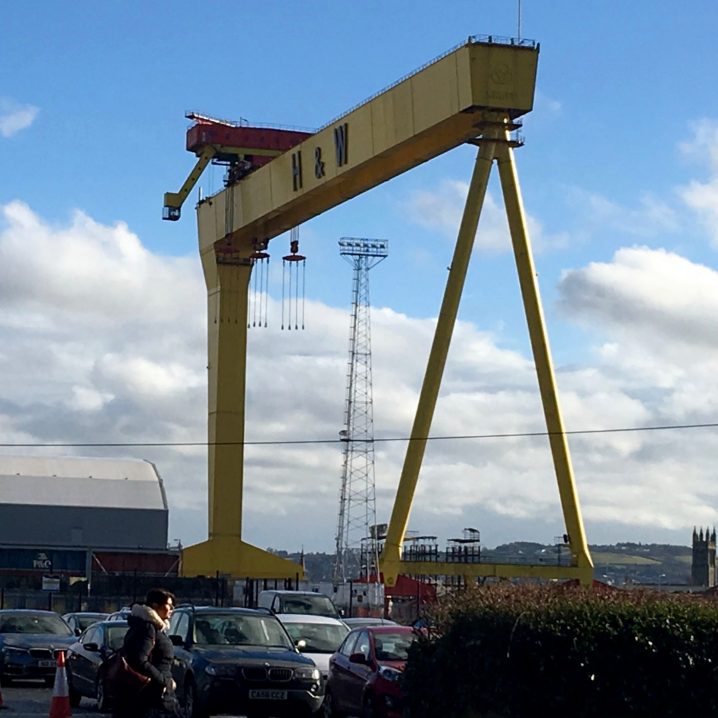 If you can visit on the weekend, you could enjoy a Titanic Museum Belfast afternoon tea as one of their events (held on a Sunday afternoon of course). They also offer early riser savings for various weekend dates. On their website is a video of the museum giving an insight into some of the interactive galleries that make up the museum.

Aside from the Titanic Belfast events, the cafe onsite is good value (compared to Dublin prices for example) and they have themed food connected to the maritime history. I stayed here afterwards and enjoyed a coffee and pasta salad. 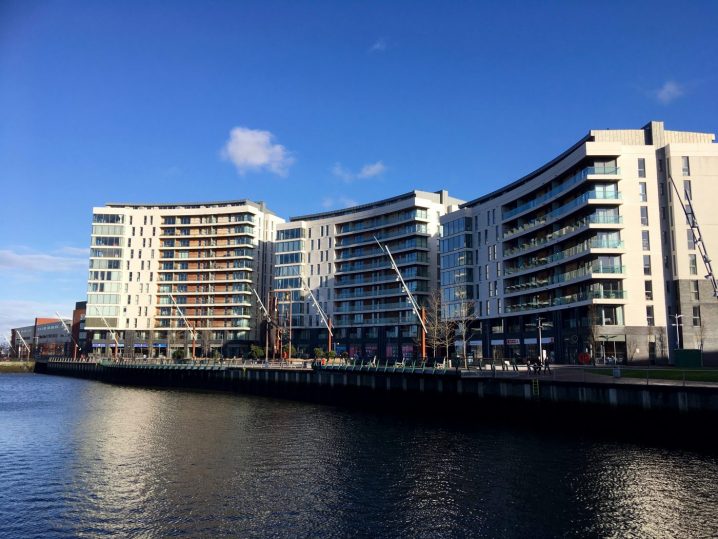 Titanic Belfast is located in the Titanic Quarter on Queen’s Island, just a short stroll from the centre of the city. The exhibition has been placed on the historic shipyard where the Titanic was designed and built.

As one of the three ocean liners built by Harland & Wolff for White Star Line, you can see the original 19th century H&W gates in the Titanic Belfast galleries.

The Titanic Quarter Belfast has been regenerated into Belfast’s urban waterfront. It’s not just the Titanic Museum that you’ll find here. There’s the Wee Tram, Titanic’s dock and pump house, the W5 Interactive Centre (for the big kid in us), and the Odyssey Pavilion & SSE Arena. It’s a short walk from the Titanic Museum to HMS Caroline (also in the quarter) which is the only surviving battleship from The Battle of Jutland in World War One.

To explore more of the area take a segway or walking tour or a boat tour around the Titanic Quarter.

How to get to the Titanic Museum Belfast: From here it’s only a 30 minute walk into Belfast’s city centre along the River Lagan. It’s a really lovely walk and there are cafes where you can stop riverside and enjoy a coffee. 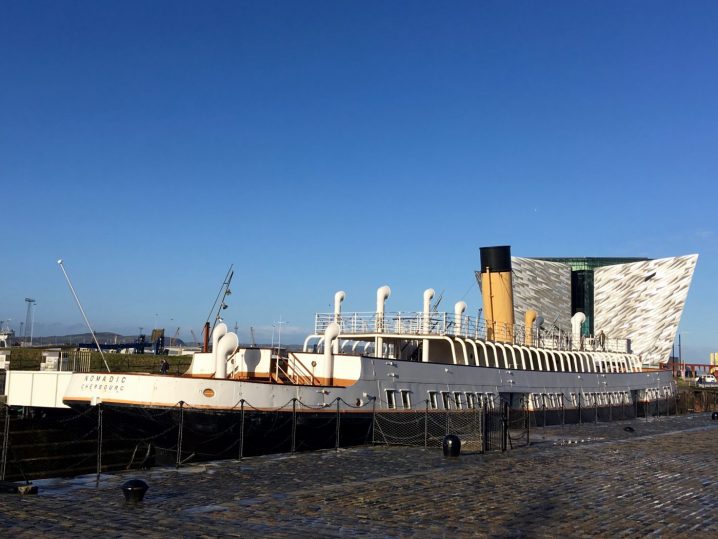 But it’s not all about the Titanic as your entrance ticket also allows entry onto the SS Nomadic Experience, Titanic’s little sister, which used to serve as a tender ship and transport passengers from the dock to the Titanic. Nomadic Belfast is the last remaining White Star vessel and a trip onboard will give you a taste of life in first class just as the Titanic passengers once experienced. 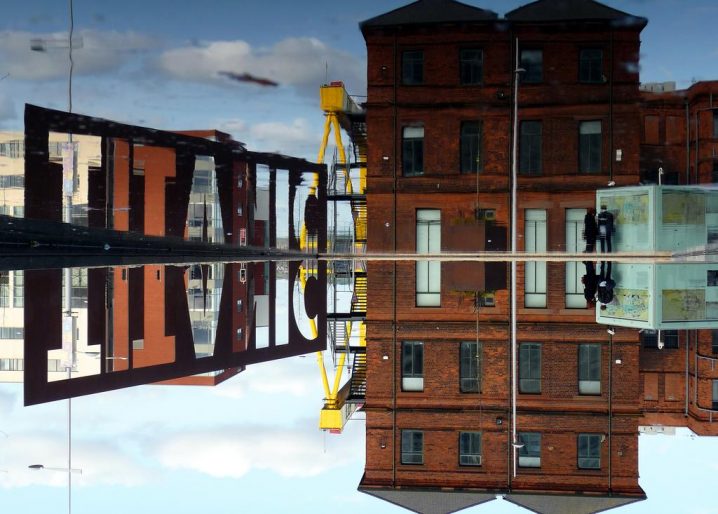 The Titanic Belfast Hotel is conveniently located just opposite the Titanic Museum in Belfast making it the perfect choice if you want to stay nearby. This hotel is the former office of shipbuilders Harland & Wolff and continues the Titanic theme with exhibits on display that adds another dimension to the birth of this famous liner.

The rooms have an Art Deco interior and if you’re lucky, you may even stay in one with views of the Titanic Quarter. There’s an on-site bar and restaurant too.

If this is out of your budget there is plenty of accommodation such as hotels and apartments nearby. The Belfast Premier Inn is also in the Titanic Quarter. 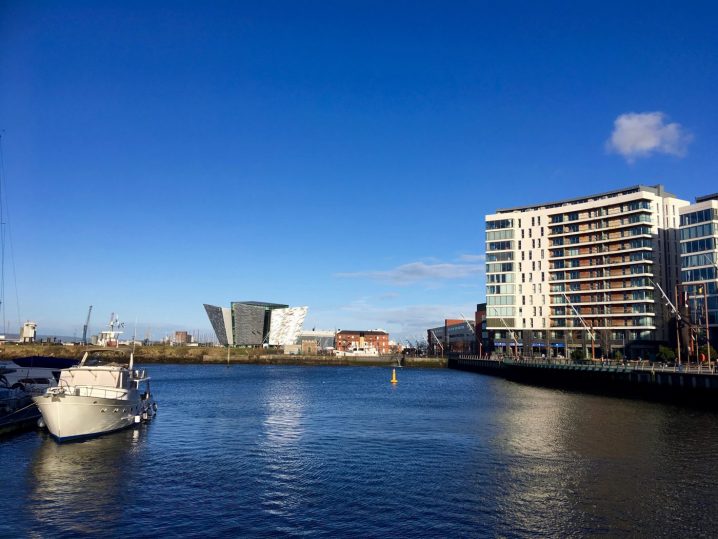 How good is the Titanic Museum in Belfast for solos? For someone who is not into maritime history. I was so surprised by how much I liked the Belfast Titanic Exhibition. Both atmospheric and informative I learnt so much and would definitely go back. I give it 5 out of 5 stars.