‘First, they would chop off your hands, then your legs and take out your internal organs until you bleed to death.'

I looked at Abraham our guide in horror.

‘Thanks for asking that question,' said the other Brit in my group directing his amused glance my way.

‘You're welcome,' I replied, still trying to shake the horrible image in my head. I stared down at the well-preserved skeleton just inches away and thought of the torture that this sacrificed victim must have encountered. Then with my wet shorts and miners helmet on full beam, I continued climbing the rocks inside the cave.

The ATM Caves tour has got to be the most interesting tour I have encountered in Belize so far. Not to be confused with a cashpoint, ATM stands for Actun Tunichil Muknal and is one of the most popular burial sites in Western Belize. 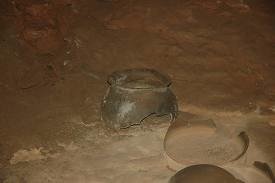 The tour begins with a forest trek before wading through streams and swimming into the mouth of the cave. Then it's on with the miner's helmet through the dark cave system into cavernous rooms where evidence of the Mayan rule lay. Ceramic pots used for rituals sit just as they were more than a thousand years ago like an underground museum, strewn across the caves for tourists pleasure. As you get deeper within the cave you pass the highlight of this Mayan tour; ‘The Cathedral' where the skeletons of sacrificed victims from the Mayan Empire lay.

The most famous is the skeleton of a young girl, known as the Crystal Maiden whose bones have been so beautifully preserved by the natural processes of the cave system that they sparkle. 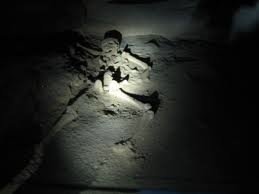 Only the elite were ‘given' to the Gods and the Mayans believed that the more pain a person endured, the happier the Gods would be.

In fact they were so into their sacrificing that whenever they were in need of rain for their crops they played a game similar to basketball and the ball courts can still be seen in Mayan temples across the Americas. The loser was bestowed the honour of being sacrificed to Chac Mol, the rain god.

But theory has it that this may have led to the collapse of the Empire, when the gods began to ‘not listen' to their sacrifices, the Mayans lost their faith.