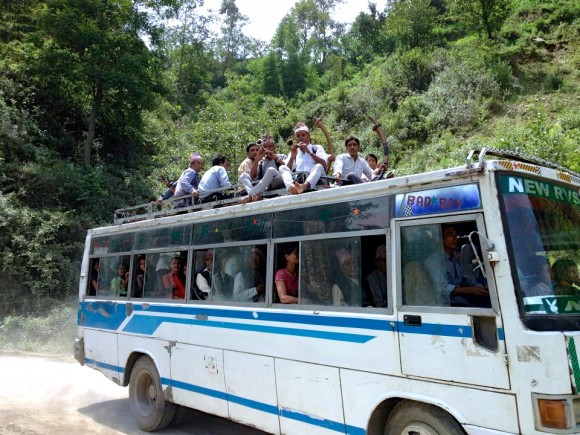 How I miss English transport. At least we have health and safety in our country and don’t play ‘how many people can you squeeze onto a microbus?’ with people hitting their heads on the ceiling and falling into others.

There are no scheduled times to depart and buses wait until they are full to the brim before leaving. I’ve even witnessed a fight breaking out and people just stare instead of wading in!

Apparently one man wanted to bring his goats on and the driver refused! Thank god as I really didn’t fancy having one of those sat on my lap.

But I can’t really complain for 20p for an hour journey. 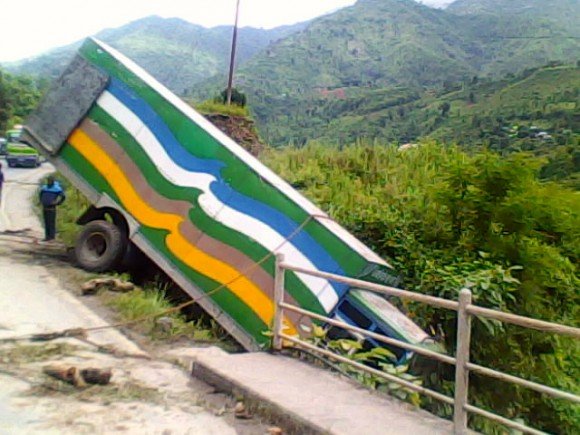 A lucky escape for a different lorry

It was on the six hour bus ride to Pokhara when we got stuck in traffic. In a hot sweaty bus we came to a standstill.

As we passed the scene of the accident two hours later, two buses had collided as one had tried to overtake and gone headfirst into another coming in the other direction. Luckily for both buses they had stopped inches from the edge of the cliff face. I shuddered at the thought.

Miles down the road we passed one that hadn’t been so lucky; a bus on it’s side down a revene and then another and another. During the eight hour journey, we passed four accidents.

And only last week it made international news that a bus in Kathmandu crashed killing everyone on board. But none of this seemed to deter our bus driver who tried to overtake at each opportunity around windy cliff paths with numerous blind spots, honking as he overtook.

It makes taking the bus a scary experience and I wonder if the drivers will ever learn?